The horror genre is becoming strong and terrifying again! With the recent successes of Jordan Peele’s Get Out and the new adaptation of Stephen King’s IT, audiences are finding themselves trusting in horror films once more. So, what are the Masters of Horror to do with these observations? Collaborate on a new terrifying adventure for us! Horror buffs Mick Garris (The Stand), David Slade (30 Days of Night), Joe Dante (The Howling), Alejandro Brugues (ABCs of Death 2) and Ryuhei Kitamura (Midnight Meat Train), along with Courtney Solomon and
Mark Canton from Cinelou, are teaming up to bring us an Anthology Horror Film perfectly titled, Nightmare Cinema.

This feature film will be made up of five shorts. All will follow different story-lines, but will each have a common denominator connecting the pieces. And who better to play the nightmarish ringleader than the legendary, Mickey Rourke (The Wrestler, Angel Heart, 9 1/2 Weeks).

The anthology will center on a series of down-on-their-luck individuals who enter the decrepit and spine-chilling Rialto theater, only to have their deepest and darkest fears brought to life on the silver screen by The Projectionist (Rourke) – a mysterious, ghostly figure who holds the nightmarish futures of all who attend his screenings. By the time our patrons realize the truth, escape is no longer an option.

The producers have also stated that a television series is set to follow after the film is released, and is said to be a cocktail of Twilight Zone meets Tales From the Crypt.

Horror fans have had a lot to sink their teeth into the past few years in terms of Anthology content. Films like V/H/S and The ABC’s of Death, and the widely popular horror anthology series, American Horror Story on FX, are standouts for the sub genre. We’ll have to wait and see what fresh hell the Masters of Horror bring to the table with their film.

In a conversation with Deadline, Canton says  “When Mick Garris brought us the opportunity to collaborate with a group like this, it was easy to get behind. Horror has become an industry strength again. When you look around at recent successes of films like It or Get Out, it’s obvious there’s a hungry audience out there that can’t be ignored.

Garris followed that sentiment with a statement of his own stating, “I love being able to bring together visionaries of horror cinema from all around the world with their personal perspectives about what scares you. This is a project I’ve been working on for some time and I couldn’t be more thrilled to partner with Cinelou and Good Deed  to share with everyone.”

Whatever they have in store is sounding like another soon-to-be successful hit for the horror genre!

Nightmare Cinema is OFFICIAL! So happy to talk about the new anthology feature I made with the amazing talents of Joe Dante, @david_a_slade, @abrugues and @ryuhei_kitamura starring MICKEY ROURKE!! 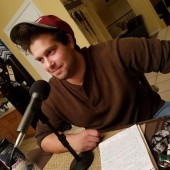 Luca has a Bachelor of Arts degree in Screenwriting from Chapman University. Some produced works of his include horror feature starring Eric Roberts, and music videos for Sean Paul, Machine Gun Kelly, and Locash. Luca's favorite HORROR films include JAWS, The Strangers, Goodnight Mommy, and The Exorcism of Emily Rose.