[Review] A DARK PLACE is a Provocative Blue-Collar Noir 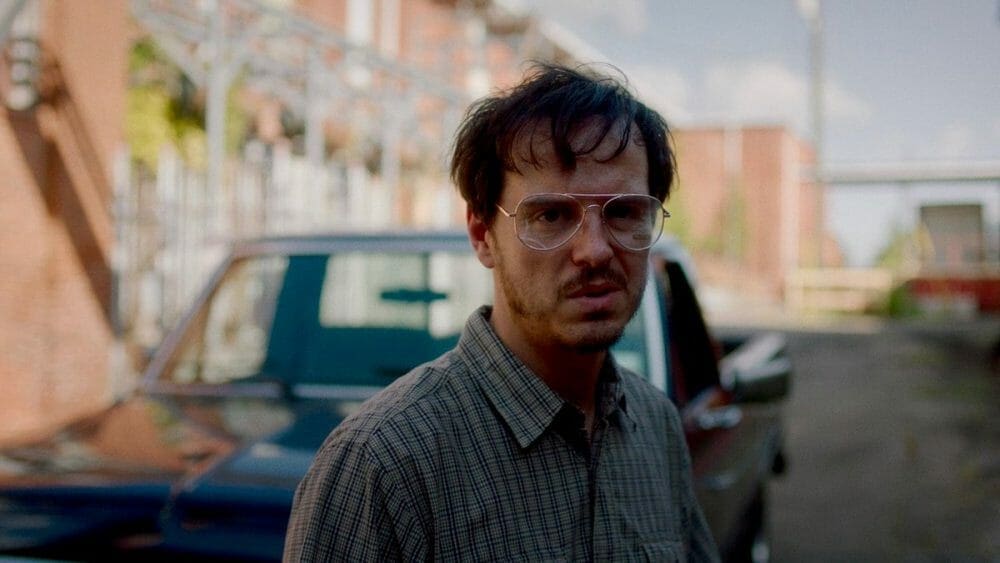 Not a lot happens in a place like Harburg, Pennsylvania. Life moves at a slow pace, very little ever changes, and people try to keep to themselves. Though when a young boy is found dead one day, one man decides to shake things up in this sleepy town by investigating the child’s death himself. For he believes that something is amiss about this tragedy—something that’s remained a secret for far too long.

In Simon Fellows’ A Dark Place, sanitation worker Donny Devlin (Andrew Scott, Sherlock) picks up trash for a living, he lives with his widowed mother, and he co-parents a teenage daughter with a woman who doesn’t love him. He leads a colorless life in an area haunted by broken promises made by those now currently in power. What starts off as a typical morning for Donny turns out to be the beginning of a mystery that only he can solve. The body of a local boy named Tyler Zeigler (Nolan Cook) washes up in a creek, and all evidence suggests this was an accidental drowning. Except Donny doesn’t think this is the case after speaking to Tyler’s mother Patty (Kate Forbes)—who says her son wasn’t one to “go exploring”—and learning there was no autopsy. As Donny conducts his own inquiry, he attracts the attention of the suspicious local sheriff (Michael Rose) as well as a pair of masked men who threaten his life.

This movie ends up being both an engrossing mystery and a cogent character study. Foremost, Donny is the town outcast and he knows it. He has no filter when it comes to his thoughts and opinions, and he does what he wants without realizing what he’s doing isn’t “normal.” For instance, when he comes across the mention of Tyler Zeigler‘s disappearance on social media, Donny hacks into his daughter Wendy‘s (Christa Beth Campbell) Facebook account to ask the victim’s brother a question. In hindsight, this was the least offensive thing Donny does in his hunt for Tyler‘s murderer. But no matter what our protagonist does, his neighbors look the other way, or they just don’t take him seriously. 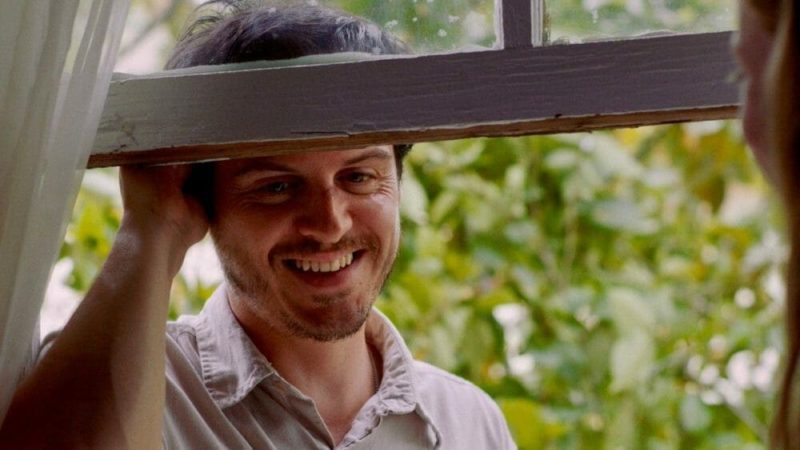 The news of Tyler Zeigler awakens something inside of Donny. The sweeping indifference he feels most of the time—which only ebbs when he’s with the daughter he’s not allowed to see too often—is replaced by an unexpected calling. Though we don’t get explicit confirmation by the movie’s end, there’s more than enough suggestive dialogue to help you understand why Donny feels so strongly about this young boy.

“What elevates A Dark Place among other somber whodunits is our unsung hero’s conviction for the truth.”

What elevates A Dark Place among other somber whodunits is our unsung hero’s conviction for the truth. The film is in fact heartbreaking, but alas, the story is familiar. Notwithstanding, Andrew Scott gives an earnest performance that will undoubtedly be the movie’s selling point in years to come. His costars are no slouches either. In particular, the women around Andrew Scott play off his character’s idiosyncrasies with adeptness. Donny‘s coworker Donna (Bronagh Waugh) and Wendy‘s mother Linda (Denise Gough) are similar on paper—they each have troubled pasts, dull present-days, and a pugnacious relationship with the protagonist. Although their subplots contain loose ends, those unfinished details don’t hurt the film overall.

The director makes a political statement without ever saying a word. After all, A Dark Place was originally called Steel Country as a nod to the setting of a former steel town. There are stray political signs which litter impoverished neighborhoods and closed-down businesses. The socioeconomic divide of Harburg is palpable within the first five minutes of the film. Those considered the working class live in small, worn-down homes where cars are parked on the lawns due to limited space. These people are brusque in nature, and a lot of them speak with a local intonation. Then there are the more moneyed residents who are near accentless and work in nonmanual jobs such as law enforcement and medicine.

A Dark Place is a model example of blue-collar noir. It paints a part of America that’s been exploited for political gain all the while delivering a reminder that evil can be insidious. Simon Fellows and writer Brendan Higgins hand us a main character we don’t have to necessarily root for yet can still care about on a basic level. And as terrible as the death of Tyler Zeigler is, his passing is incidentally a signal for much-needed change in Harburg. The exposure of the haves as immoral represents the downtrodden looking for justice after being used up and then left to fend for themselves. After he and so many others have been failed by those running the show, Donny finds a way to move on.

The themes here get heavy under scrutiny, but they shouldn’t overshadow the surface of A Dark Place. It’s a film where an avoidable death somehow sparks life in someone else. Through his quest to vindicate the victim, Donny Deviln experiences a catharsis like few others ever will. Seeing that come to light on screen is not only provocative, it’s also wondrous.

A Dark Place is now playing on demand and in select theaters. Let us know what you think of the movie on Twitter, in the official NOFS Subreddit, and on Facebook in the Horror Movie Fiend Club! 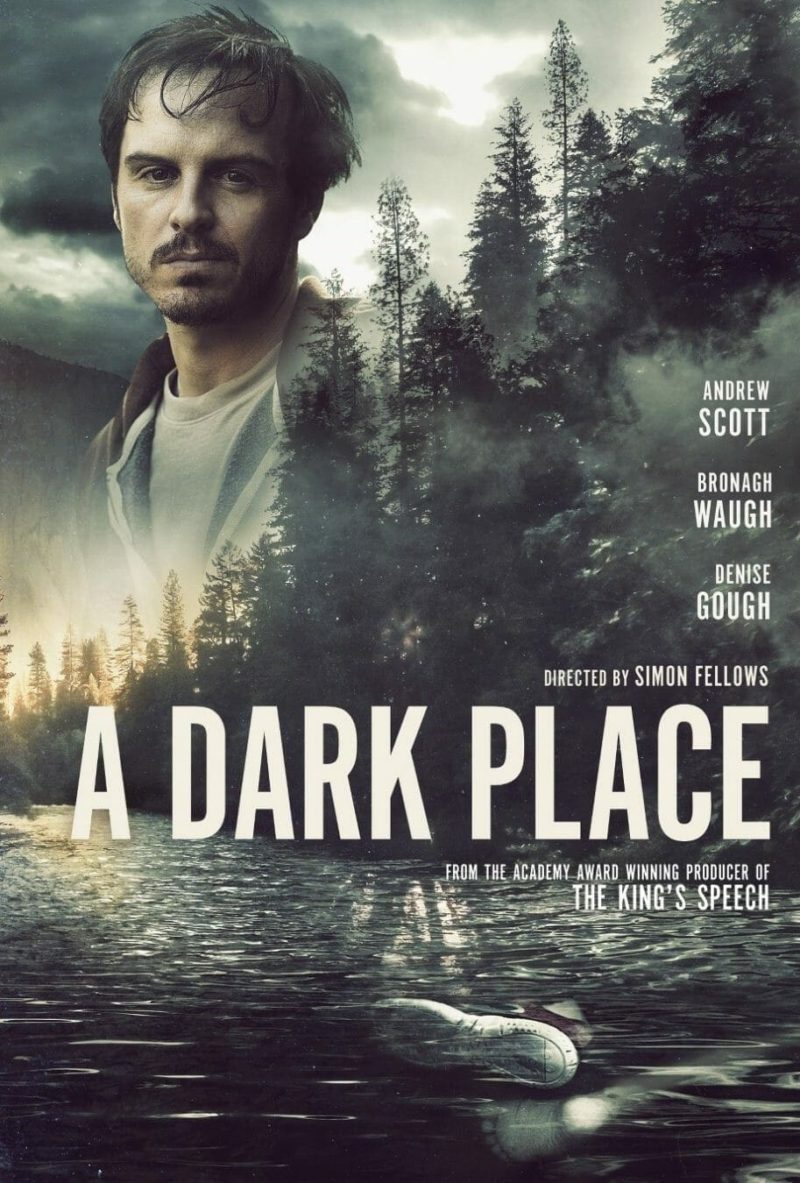 TLDR A Dark Place is a model example of blue-collar noir. The film is in fact heartbreaking, but alas, the story is familiar. Notwithstanding, Andrew Scott gives an earnest performance that will undoubtedly be the movie's selling point in years to come. This movie ends up being both an engrossing mystery and a cogent character study.