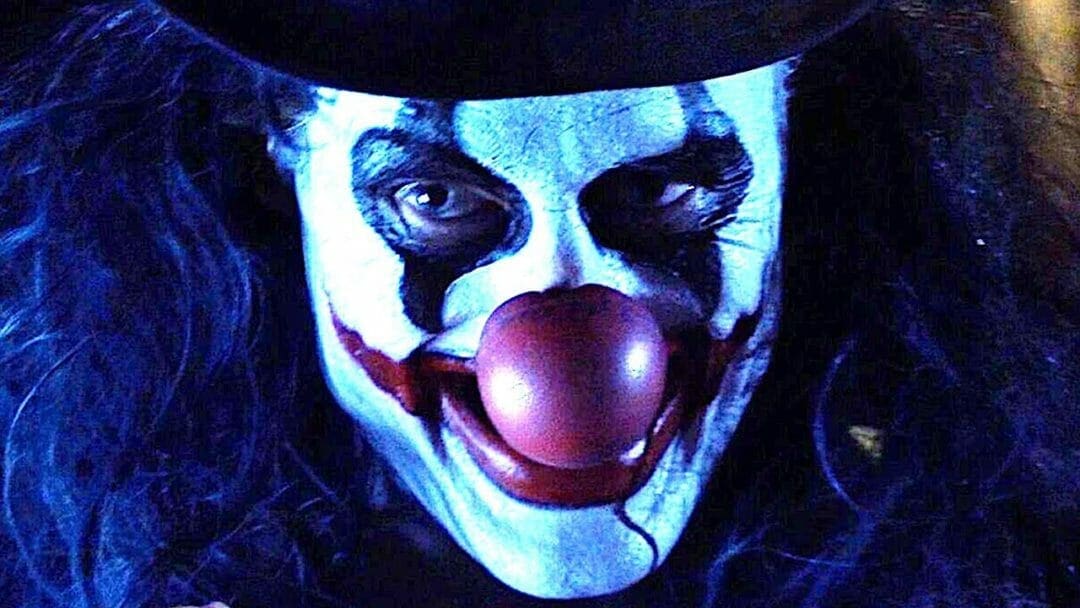 What do a stripper, an Elvis impersonator, a truck driver, and a teen runaway all have in common? They’re all trapped in a clown-filled storm named Clownado. The film, written and directed by Todd Sheets, is just as ridiculous as its name suggests, but in the most entertaining way possible. Think Twister, but with evil clowns and a lot of blood.

Savanna (Rachel Lagen, Dreaming Purple Neon)  and her boyfriend are making a Bonnie-and-Clyde-esque plan to steal her literal clown of a husband’s movie and run away together. However, her husband Big Ronnie (John O’Hara, Sleepless Nights) gets wind of their plot and stops them mid robbery. After exchanging insults like they’re in an old talkie from the 1950s, Ronnie kills Savanna’s lover. In an act of revenge, Savanna puts a curse on him and his cronies, which turns them all into evil clowns. Unfortunately, the Clownado in question isn’t the same as a Sharknado. In Clownado, a group of cursed clowns use the destructive cyclones to travel from massacre to massacre.

“…just as ridiculous as its name suggests […] Think Twister, but with evil clowns and a lot of blood”

As a result of the destructive clownado, four strangers are united in trying to save each other and their town. Truck driver Hunter (Bobby Westrick) picks up Elvis impersonator Dion (Antwoine Steele, Dreaming Purple Neon) and takes him to a bar called the Stinky Pink, complete with Linnea Quigley as a bartender, that supposedly makes the best Italian steaks in the state. There they meet a recently-fired stripper named Bambi (Dilynn Fawn Harvey, Bonehill Road) and they promise to give her a ride home to her kid. Then they meet young runaway Rachel (Sierra Stodden). This strange pack comes together at a diner when the first clownado hits. From there, they must band together to find a solution to their clown problem.

The acting is intentionally horrendous. Lines are delivered as if they are reading off a piece of paper. Dialogue feels forced and clunky. Insults are hurled with either too much or too little feeling. Yet somehow it all works, especially if you’re familiar with B-horror film. However, if you don’t like cheesy horror and can’t ignore strange line delivery, this will feel like a painful slog through garbage.

John O’Hara as Big Ronnie especially rules; he is the perfect cheesy B-horror villain. His face is always twisted into an uncannily large grin that screams, “I am five seconds from snapping!” O’Hara also creates his own version of a demented clown laugh, which equals throughout the film, warning of an impending clown massacre. O’Hara took over-the-top and took even further, which makes watching murderous clowns all the more entertaining. For the rest of the cast, they all blur together into one strange mess of one-liners; no one particularly stands out from the maddening crowd.

Clownado delivers some of the best worst dialogue out there, all written with the purpose of being the best of the worst. Lines such as “My name’s not Flo, bitch” and “Consider it alimony, mother fucker” illustrate the delicate art of using swear words for emphasis. Sure, swear words flow out of each character’s mouth with reckless abandon, but Sheets makes sure each swear delivers a laugh. While the dialogue is so cheesy I had to take a Lactaid, Sheets knew what he was doing when he was writing Clownado.

“Clownado delivers a bucket of laughs […] a perfect movie to start off the spooky season.”

Just as he knew how to write dialogue, Sheets knew the key to his film’s success would be the two Bs of horror: boobs and blood. And there is plenty of both to go around. Bodices are literally ripped open, exposing breasts in closeup. Clowns rip out people’s intestines and play with them. One female clown even cuts off a woman’s breasts so the clown can have new ones. It’s all outlandishly twisted in a way that will either make you laugh or make you cringe.

In a year full of clown movies, Clownado knows exactly what it is and leans into it hard. It is a phenomenal B-horror flick, complete with gnarly kills and cheesy dialogue that never takes itself too seriously. Todd Sheets created what will almost definitely become a cult horror classic, a go-to film to show your friends after you’d had a few beers. Clownado delivers a bucket of laughs, and then some, and then an even bigger bucket of blood. It’s a perfect movie to start off the spooky season.

Clownado is out now on VOD and comes to DVD on September 17. Will you be venturing into the storm? Let us know on Twitter, in the Nightmare on Film Street Subreddit, and on Facebook in the Horror Movie Fiend Club! 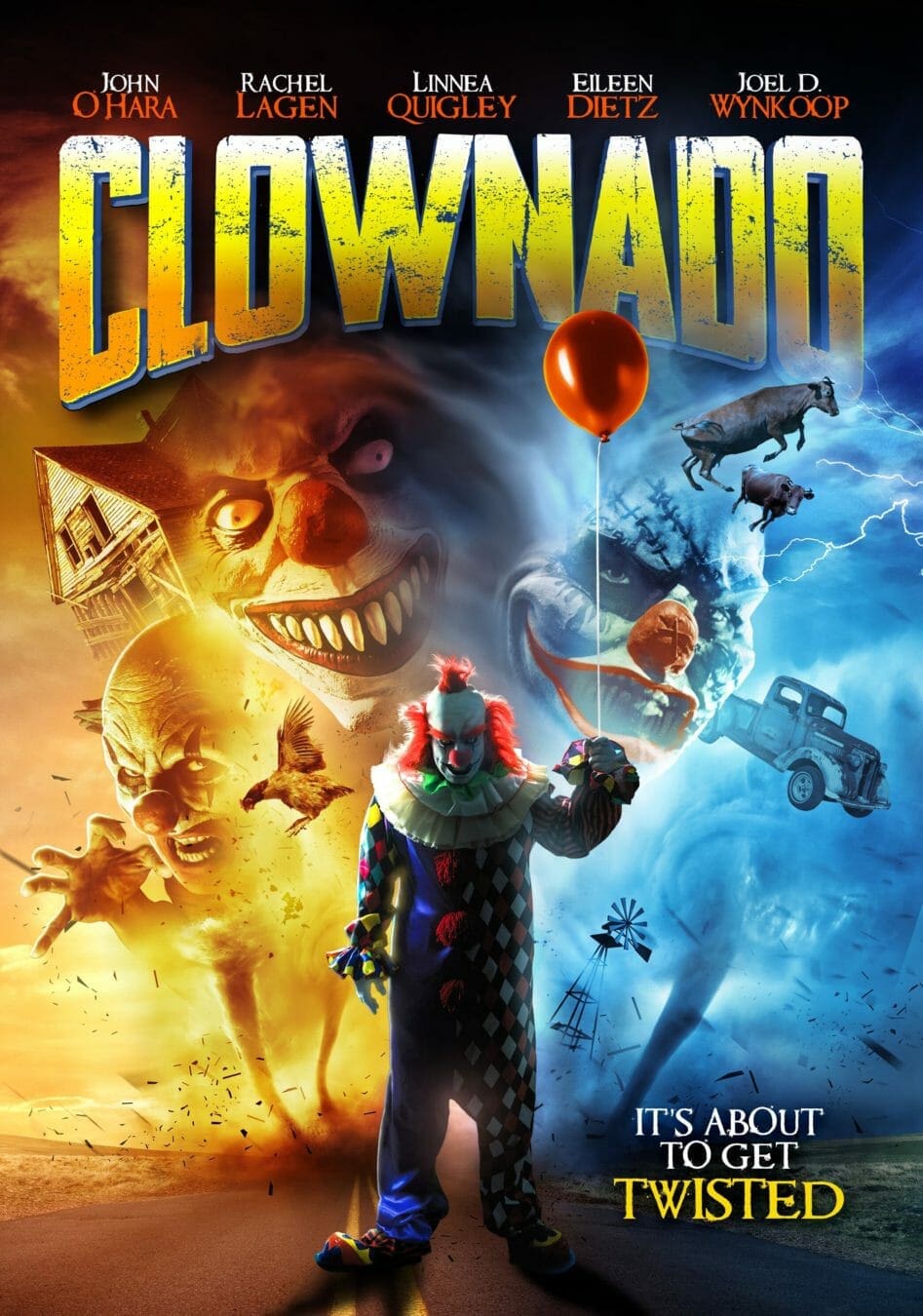 TLDR In a year full of clown movies, CLOWNADO knows exactly what it is and leans into it hard. It is a phenomenal B-horror flick, complete with gnarly kills and cheesy dialogue that never takes itself too seriously. Todd Sheets created what will almost definitely become a cult horror classic, a go-to film to show your friends after you’d had a few beers. CLOWNADO delivers a bucket of laughs, and then some, and then an even bigger bucket of blood. It’s a perfect movie to start off the spooky season.