As common as the horror anthology was not too long ago, it seems like they’re few and far between these days. In actuality, they’re still a popular format for budding filmmakers. Very few of these newer anthologies get noticed by the mainstream before eventually fading into obscurity. What ultimately sets something like Scare Package apart from its peers is its utter motivation. From start to finish, it’s pretty clear this was a movie made with a lot of love and esteem for horror fans all around.

Like any respectable anthology, there is a wraparound story. And it is a lofty one. Until then, though, viewers are quickly familiarized with the sort of movie they’re in for. There is an astonishingly self-aware timbre to the script that will be hit or miss, depending on whether or not someone likes comedy in their horror. Simply put, Scare Package is wall-to-wall with humor.

“[…] a movie made with a lot of love and esteem for horror fans all around.”

First up in this ominous omnibus is a delightful teaser before meeting a character intrinsic to the whole framing story. Almost all of the segments have heavily pronounced nods to slashers, but Emily Hagins’ “Cold Open” truly plays with the conventions without feeling strained by them. As it turns out, this is merely a sample of what’s to come. The de facto narrator of the movie, Chad (Jeremy King), lures audiences away to the nostalgia-inducing Rad Chad’s Horror Emporium and Scare Package‘s true wraparound.

Director Cameron Burns and writer Aaron B. Koontz serve up a kind of sentimentality that will warm up even the most hardened horror fan’s heart. Just the sight of a brick-and-mortar video shop will be bring tears to genre enthusiasts’ eyes. Here, the store’s namesake punches down on an overzealous patron named Sam (Byron Brown) while training new employee Hawn (Hawn Tran). When Chad‘s not doing either of those things, the film’s other segments are orally shared or broadcast through the store’s televisions. Sam kicks things off with Chris McInroy’s “One Time in the Woods,” a sendup of camp-time slashers that works hard for its laughs. The jokes are hasty, but the gore effects are impressive. The remainder of the self-contained stories are a medley of ups and downs. Actor and director Noah Segan (Knives Out) cuts his teeth on “M.I.S.T.E.R.,” a curious debut that’s too truncated for its own good. Twin directors Courtney and Hillary Andujar produce one of the best-looking vignettes of the bunch; their unified eye for production design and graphics is undeniable. As a result, “Girls’ Night Out Of Body” is equally dreamy and spooky.

“The Night He Came Back Again! Part IV: The Final Kill” is another go at slashers. By now, the parody potential is wearing thin as is. In Anthony Cousins’ defense, he readily pokes fun at the absurd plot devices found in the subgenre — including a doozy that’s thrown out there at the very end without nary an explanation. A bold choice, on his part. Ending the series of standalones is Baron Vaughn’s “So Much To Do,” a perplexing and atmospheric standoff between good and evil. It feels out of place, yet the score will undoubtedly be appreciated by John Carpenter fans.

“[…] an endearing collaboration between friends for anyone who loves to feel a chill down their spine on the regular.”

The road to the main attraction hasn’t been the smoothest, but anyone wanting a more interactive event will be pleased with “Horror Hypothesis.” The conclusion could be best described as a thinking horror fan’s snarky buffet of ideas akin to The Cabin in the Woods; the wraparound turns into a full-fledged collision of meta-humor and sight gags. The crew is having a blast with what they’re given, and director Aaron B. Koontz visibly wears his affection for horror on his sleeve.

Not everything in this anthology works. The obvious flaws can be itemized and deducted from the overall score, but none of that really matters to the film’s target audience. The objective here was simple: horror fans make a movie for other horror fans. That is something the filmmakers pull off in spades. The final product, an endearing collaboration between friends, is for anyone who loves to feel a chill down their spine on the regular. New horror anthologies enter and exit all the time. The majority of those remain invisible because they don’t stand out from the crowd. Scare Package is the complete opposite as it’s an attention-grabbing concert of inside jokes, visceral visuals, and keen performances. One’s level of enjoyment will certainly boil down to their knowledge of the genre and their ability to laugh at what scares them.

Scare Package is available for streaming on Shudder starting on June 18. Share your thoughts with the Nightmare on Film Street community on Twitter, in our Official Subreddit, or in the Fiend Club Facebook Group! 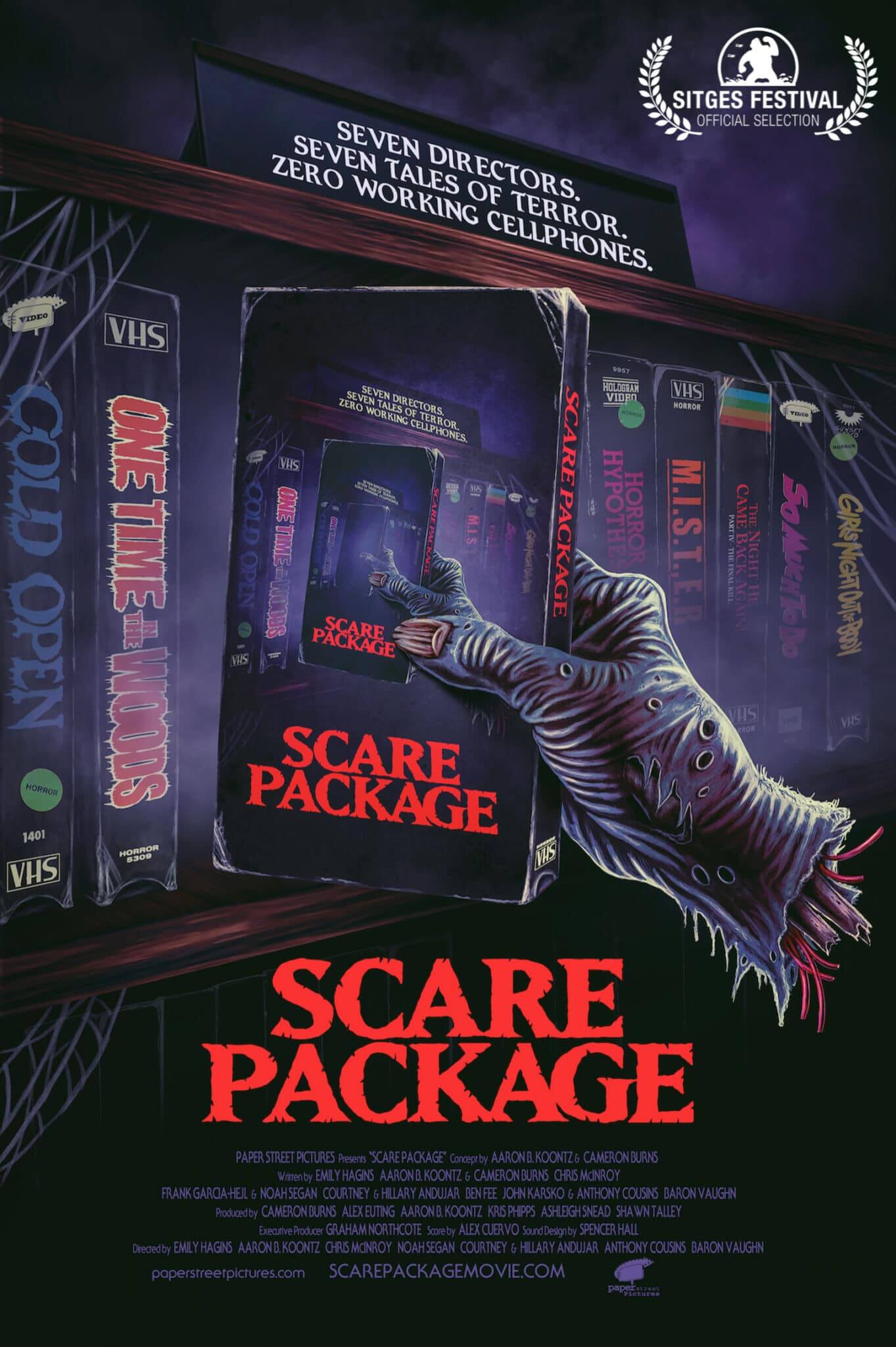 TLDR What ultimately sets something like Scare Package apart from its peers is its utter motivation. It's an attention-grabbing concert of inside jokes, visceral visuals, and keen performances. One's level of enjoyment will certainly boil down to their knowledge of the genre and their ability to laugh at what scares them.

Ability to Stir Up Nostalgia