[Review] IT: CHAPTER 2 Gazes Long and Hard at the Past, Leaving Pennywise Juggling Scares 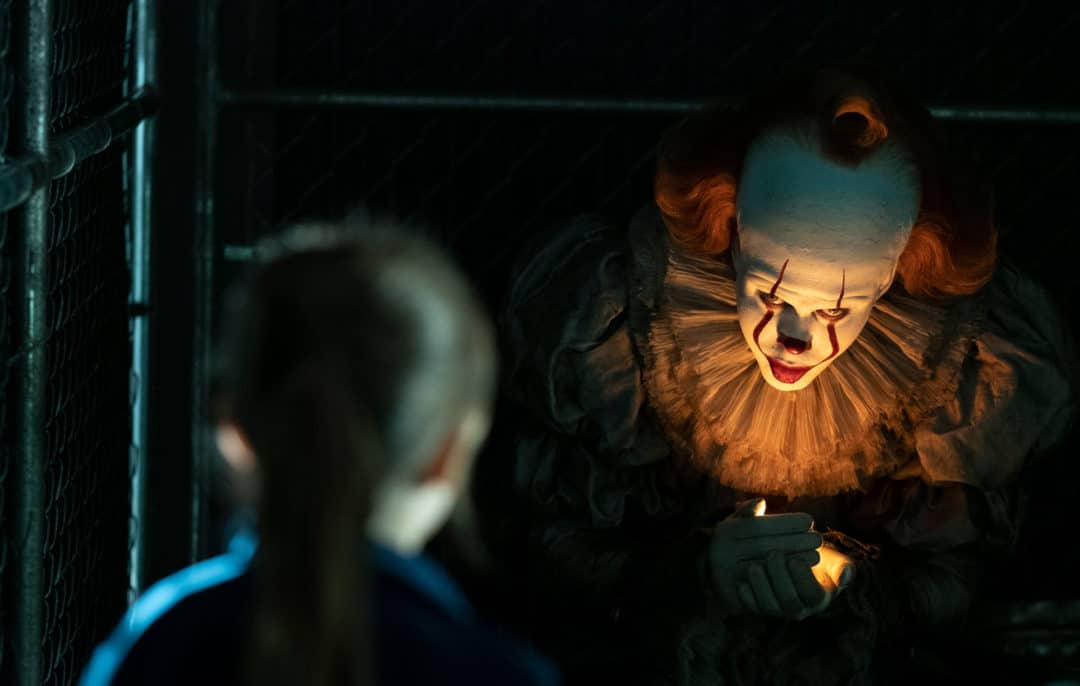 Has it been 27 years already? Boy, time sure flies when you’re getting the f*ck out of Derry, Maine. Unfortunately for the Loser’s Club, Mike Hanlan never left – and now that Pennywise is back, they’ll be returning to their old stomping grounds to honor a blood pact and return to the sewers. One last time. That’s right, It: Chapter 2 has arrived.

This time around does Pennywise have enough steam to scare a pile of adults with shoddy memories of their frightful time biking above his lair? Coming in just shy of 3 hours, he’d better.

The Losers’ Club, consisting of Derry’s foul-mouthed geeks, loners, and outcasts; are formed one rock-hurling afternoon in the summer of 1989. Young Bill Denbrough (Jaeden Martell, Knives Out), Beverly Marsh (Sophia Lillis, Sharp Objects), Ben Hanscom (Jeremy Raymond Taylor, Goosebumps 2: Haunted Halloween), Mike Hanlan (Chosen Jacobs, Castle Rock), Richie Tozer (Finn Wolfhard, Stranger Things), Eddie Kasprack (Jack Dylan Grazer, Shazam!), and Stanley Uris (Wyatt Oleff, Guardians of the Galaxy); the lucky seven. After kids in town go missing, including Bill’s younger brother Georgie (Jackson Robert Scott), the Loser’s Club are forced to face their fears. Appearing most often in the form of Pennywise the Dancing Clown (Bill Skarsgård, Villains), the mysterious It haunts and taunts the seven, hellbent on claiming each and every one of them using their own weaknesses to weaken. Stronger united, they enter the sewer system, Pennywise’s lair, and together – they defeat him.

Or so they thought.

Directed by Andy Muschietti (Mama) and written by Gary Dauberman (Annabelle Comes Home), It: Chapter Two takes place 27 years after the events of the first film. It’s 2016, and Pennywise has returned. The Losers’ Club must honor their blood oath to each other to protect the children of Derry, Maine by returning home; a place they can’t quite remember, but know in their gut it isn’t going to be a warm welcome. Mike Hanlan (Isaiah Mustafa, Shadowhunters), who stayed in Derry, spent much of his time hunting down the origin of Pennywise; because if he discovers what Pennywise is, he should be able to figure out what kills It. But everything’s better with friends, and one by one the Losers return; Bill Denbrough (James McAvoy, Glass), Beverly Marsh (Jessica Chastain, Crimson Peak), Ben Hanscom (Jay Ryan, CW’s Beauty & the Beast), Richie Tozer (Bill Hader, Cloudy with a Chance of Meatballs), Eddie Kasprack (James Ransone, The Wire), and Stanley Uris (Andy Bean, Swamp Thing).

But Pennywise has got an even bigger bag of tricks (and a $70 million budget), so he’ll throw a whole host of new ghouls and goodies at the seven – and some fan favorites from the first film (including the wonderful Javier Botet as The Leper). The first half of It: Chapter Two plays out like a bit of a clip show. You know those episodes from old TV series’ where they just re-hash old content in an effort to up the episode count? Like that. It seems adult fears and present-day character development take a backburner as our Losers’ reminisce the good ole day’s. And by good ole days; I mean the bad ole days in 1989 when Pennywise was trying to kill them. While these scenes are new, and Pennywise is as fresh and shapeshifting as ever – the entire first two hours of the film.. are completely riskless. We know our characters will survive whatever Pennywise throws at them, because 1. we’ve seen It: Chapter 1, and 2. each incident wasn’t important or jarring enough for any of them to share with their Loser pals back in 1989. So while the adult Losers’ Club idles around a B&B wondering “Should I Stay or Should I Go” – The Clash, audiences watch It Chapter 0.5 until the Losers are finally ready to hit the sewers.

Even Pennywise, though given much liberty to assault every scene with a spook or two, takes a bit of a backburner to friendship. Bill Skarsgard feels underutilized, Pennywise instead opting to appear as a variety of CGI-enforced critters. (Or, breaking a grown-up and just-as-angry Henry Bowers (Teach Grant) out of the mental hospital to do his evil bidding.) Not that I’m not a fan of shapeshifters doing their thing, but I could have watched It’s wayward eye go wayward a few more times.

“Home was never Derry, Maine. Home has always been The Losers’ Club.”

But friendship is ultimately what the story of It is about. Outcasts finding a home in the relationships they’ve built. Home was never Derry, Maine. Home has always been The Losers’ Club. The adult Losers’ do a wonderful job portraying the grown-up kids that audiences fell in love with. I went into this film most eager to see Bill Hader. Won over by his comedy for years, it’s only recently I’ve grown to appreciate his acting chops in the hilarious but grave Barry on HBO. But perhaps the biggest surprise of the club was grown-up Eddie Kasprak; not only was the casting impeccable, but I found James Ransone to be charming, hilarious and utterly scene-stealing.

As much as I loved the Adult Losers’, the kids truly dominated the stage of It: Chapter 2. While I loved scenes expanding on their friendship, the CGI was cringeworthy at times. The kids have definitely aged between filming the first and second parts, and there were segments that were so filtered and softened that I felt like I was watching a video game cut-screen, waiting to get control of the remote. I understand it’s hard to work around unavoidable things like puberty, but I almost wish both parts of It had been conceived, written, and filmed as a whole. It might have balanced out a flashback-heavy finale. Like the 1990 It, we could have told the story from the vantage of our adult Losers’ who are slowly uncovering Derry’s horrors as they return to it the entire time. I have a feeling Part 1 and Part 2 aren’t going to watch together so cohesively.

“It: Chapter 2 is a wild and zany roller coaster of terrors.”

It: Chapter 2 is a wild and zany roller coaster of terrors. Those hoping to be assaulted by Pennywise’s giddy ghouls will satiate their deadlight-hungry palates, but will have to sit through a muddled and meddling plot in-between each morsel. The Losers’ Club have returned to Derry, but Pennywise is a kids’ demon. Adults don’t get to have the fun, they just clean up the mess afterward.

It: Chapter 2 is now in theatres. After you’ve seen the film, get some more terrors with 10 Spooky Carnivals to Rival Derry’s Canal Days, or 10 of the Creepiest Old Ladies to rival Mrs. Kersh’s tea time! And don’t forget to join the It: Chapter 2 discussion happening over in the Nightmare on Film Street community on Twitter, Reddit, and in the Horror Movie Fiend Club on Facebook! TLDR It: Chapter 2 is a wild and zany roller coaster of terrors. Those hoping to be assaulted by Pennywise's giddy ghouls will satiate their deadlight-hungry palates, but will have to sit through a muddled and meddling plot in-between each morsel. The Losers' Club have returned to Derry, but Pennywise is a kids' demon. Adults don't get to have the fun, they just clean up the mess afterward.