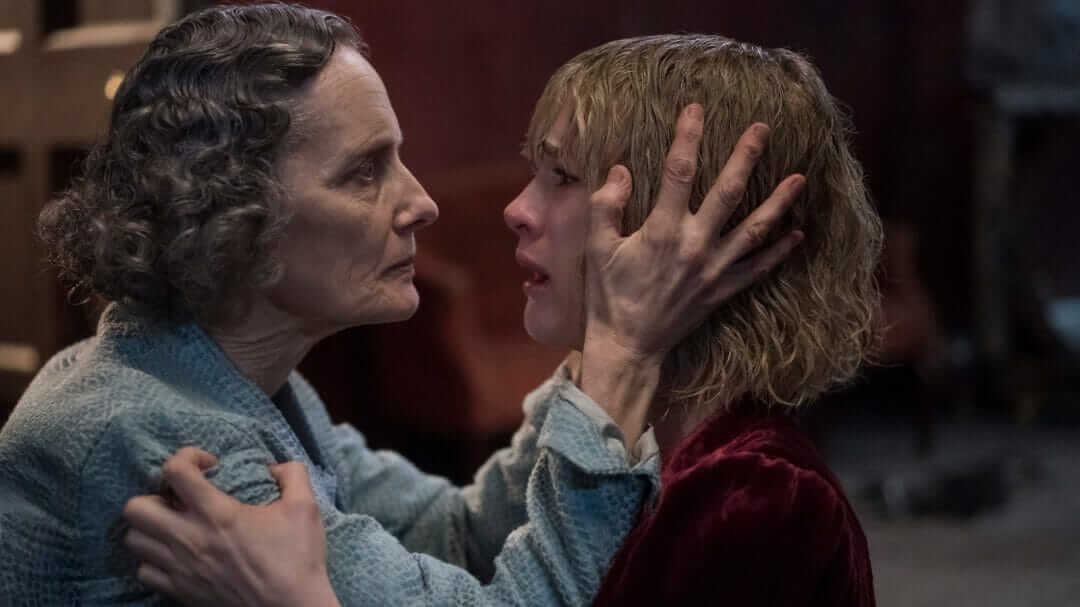 It’s almost impossible to properly review The Turning without talking about how it ends. Let’s just say that the finale is so jarring that you almost manage to forget that you were grooving on the preceding 70 or 80 minutes, which are as fun as a haunted house movie can be. Now, there’s nothing wrong with a good twist (and yes, we hate it when movies hold our hands like incorrigible infants that don’t pay attention) but the end of The Turning seems to forget that the rest of the movie does nothing to set you up for that twist.

In spite of that, The Turning has its good points. Based on an 1898 novella by Henry James, which was previously adapted into the 1961 film The Innocents, The Turning follows a young teacher named Kate (Mackenzie Davis) who takes a job as a live-in governess for an orphaned girl named Flora (Brooklynn Prince). Flora lives in a palatial country house with the housekeeper Mrs. Grose (Barbara Marten), who defers to Flora and her brother Miles (Finn Wolfhard) as “thoroughbreds” and part of a great family tradition that Kate needs to teach the kids to uphold.

“…the finale is so jarring that you almost manage to forget that you were grooving on the preceding 70 or 80 minutes, which are as fun as a haunted house movie can be.”

Of course, with a family this weird and a house this off-the-beaten-path, you know that there are some messed up things afoot. Kate’s not at the estate for too long before spooky stuff starts to happen. But is it ghosts or is it all a sadistic prank by Miles who’s more than a little inappropriate with his sister’s new teacher? But in that, is Miles a bad seed given a lot of rope by the loyal family servant, or is his behavior the fault of an undo supernatural influence of the former groundskeeper who died under questionable circumstances?

To Finn Wolfhard goes the credit for selling Miles‘ believable oscillation between being a sweet though misunderstood kid, and being dangerously obsessive and nearly psychotic. In Henry James’ novella, Miles is a tragic figure possessed by the ghost of the old groundskeeper, here played by Niall Greig Fulton, but the screenplay adds a shade of grey by suggesting the influence Miles finds himself under can be explained by the clearly misogynist attitudes of the living groundskeeper. Sometimes you don’t need a ghost to explain a boy’s strong negative attitude towards a woman. 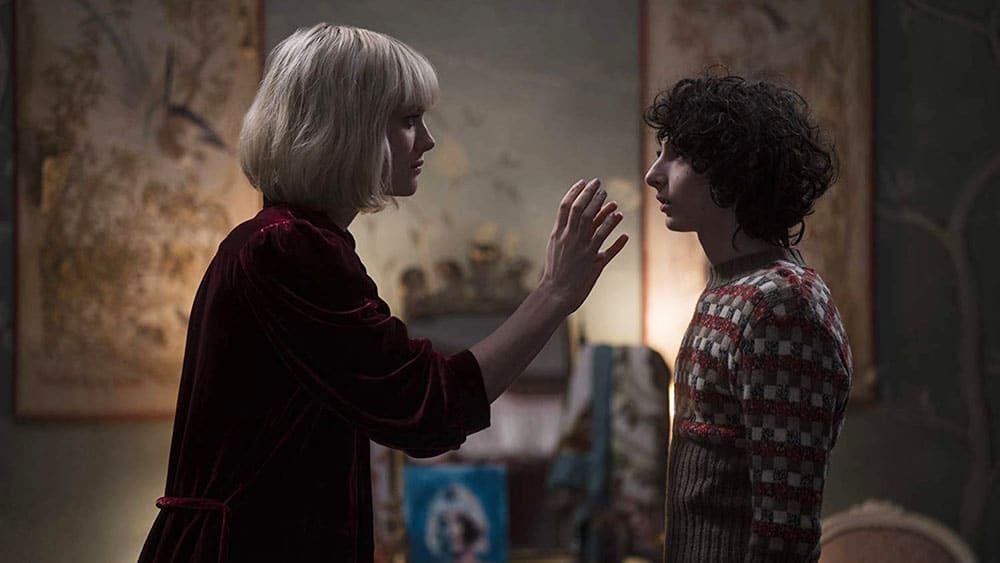 Brooklynn Prince nicely lampshades the expectation of the creepy little girl trope by playing Flora as fairly optimistic and well-adjusted, given her unfortunate circumstances. She’s the counterpoint to Miles, in that she understands there’s some bad stuff going on in the old house, but she doesn’t seem affected by it. You keep waiting for the turn when the mask of childish innocence falls off, and though it doesn’t, that fact adds another level of suspense to the proceedings.

Speaking of inscrutable, Barbara Marten is an interesting, low key presence as Mrs. Grose. She is stern and guarded, but she also has some surprising warmth. She comes off as pleasantly oblivious to the weirdness in the manor house, and protective instead of overly antagonistic counterpoint to Kate‘s newness and her radical ideas like taking Flora into town for ice cream. For Mrs. Grose, ignorance is bliss, or maybe it’s just how she copes.

“It’s a thankless chore being the one “sane” person in a haunted house movie, but [Mackenzie] Davis carries the burden with relative ease…”

That brings us to the leading lady Mackenzie Davis, who was easily the best part of Terminator: Dark Fate, and was a stand out in her brief role in Blade Runner 2049, and in her regular role on Halt and Catch Fire. It’s a thankless chore being the one “sane” person in a haunted house movie, but Davis carries the burden with relative ease, and with a lot of compassion and understanding for the two kids. It’s easy for a character like Kate to be painted as aloof and gullible, but Davis plays Kate as neither of those things. The hardest thing to do in a horror movie is not act like you’re in a horror movie, but Davis makes it work.

And for the most part, The Turning does work. Director Floria Sigismondi doesn’t lean on jump scares but uses all the natural assets of a good haunted house with lots of dark hallways, rooms that have fallen into disuse, and mirrors. That’s not to say that there aren’t jump scares, and there’s a least one good one in a dark mirror, but Sigismondi knows that darkest parts of the imagination are worst than the darkest rooms in terms of generating those feelings of dread. Having said that, the real unsettling part is just how rotten Miles might have become.

The screenplay comes courtesy of Carey W. Hayes and Chad Hayes, who, speaking of haunted houses, have two Conjuring movies under their belt, so they know how to plot spooky happenings, but The Turning doesn’t slow burn like those main Conjuring movies. Sigismondi wastes no time getting to the scares, and there’s just enough time to understand that this story is set in 1994, and a few days after Kurt Cobain’s death in April of that year. It’s tidier that way because that means Kate doesn’t have a cell phone, and it’s hard to not to feel a Seattle grunge vibe in the non-stop overcast skies at this country house.

Demerits? Well, The Turning moves predictably, but there’s an old axiom that there’s nothing wrong with the formula, so long as you’re able to use the formula well. To go back to The Conjuring, those movies have fun with the idea that it’s all in the victim’s head, but there comes a point when the paranormal activity is too great to ignore. The Turning seems to want it both ways though, right up until the very end. In fact, there are two endings as if to solidify the film’s own indecision; one of them is so obvious it could have spilled from the MacBook of the laziest Hollywood hack, but it would have been satisfying at least. The second ending barely has any set-up but it’s at least plausible, so that’s something.

“The Turning is far from refuse, but there is a lack of confidence in the finished film.”

In the cold of January, when it’s typically expected that nothing but garbage is released from Hollywood, The Turning is far from refuse, but there is a lack of confidence in the finished film. Was it the director or the studio that couldn’t just be satisfied with an okay haunted house movie? Who knows? But if you’re a fan of the genre, then you will likely enjoy a satisfying spin on a classic, and if you want to bail on the last five minutes, it’s likely no one will blame you.

Let us know what you thought of The Turning over on Twitter, in the Nightmare on Film Street Subreddit, and on Facebook in the Horror Movie Fiend Club! 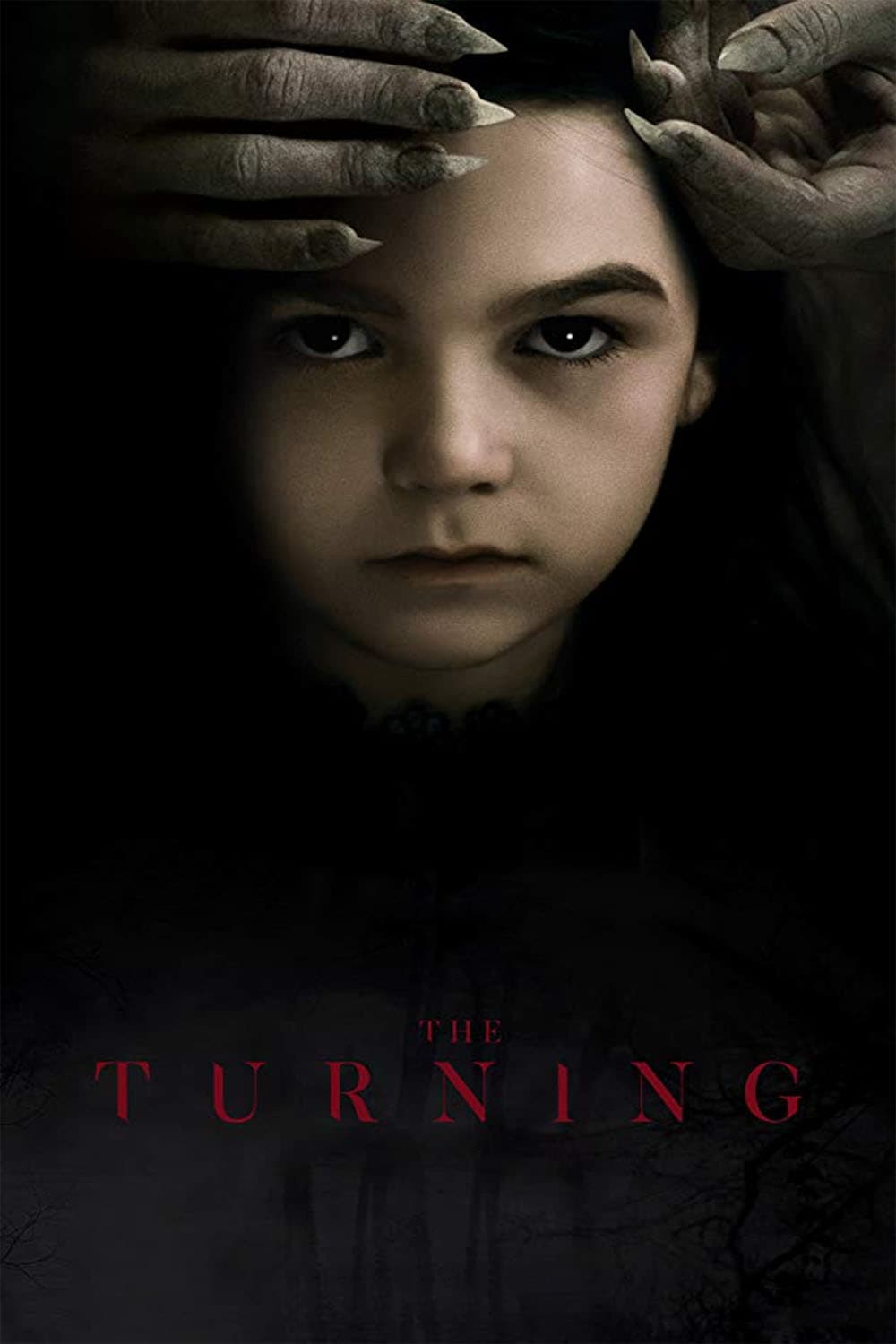 TLDR In the cold of January, when it's typically expected that nothing but garbage is released from Hollywood, The Turning is far from refuse, but there is a lack of confidence in the finished film. Was it the director or the studio that couldn't just be satisfied with an okay haunted house movie? Who knows? But if you're a fan of the genre, then you will likely enjoy a satisfying spin on a classic, and if you want to bail on the last five minutes, it's likely no one will blame you.