Sun-drenched sand. Bronzed, glistening bodies. An ocean as blue as it is in your dreams… These are not phrases most people would associate with British beaches. If you grew up in the UK like I did, you probably had at least one disappointing seaside holiday — and if you didn’t, just imagine ice-cold water and vicious seagulls and you’ll get the picture.

Of course, in a horror movie, your trip to the beach wouldn’t just end with a cheeky gull pinching your chips. The British seaside has been the setting for many horror tales, from understated ghost stories to eerie atomic scares. So, in the spirit of March Break Month, lather on the sunscreen and get ready for sand in all the wrong places as we go on 10 terrifying trips to British beaches.

Between 1971 and 1978, the BBC brought fear to the yuletide every year with a series of short television films collectively dubbed A Ghost Story for Christmas. The second installment, director Lawrence Gordon Clark’s A Warning to the Curious, is based on the M. R. James short story of the same name and set in the fictional English seaside town of Seaburgh. The film makes great use of Norfolk’s expansive beaches as protagonist Paxton (Peter Vaughan) is relentlessly pursued by a vengeful spirit after digging up a Saxon crown. If you’ve ever tried to run across sand, you’ll know where the true terror in this film lies.

The directorial debut of Carl Tibbetts, who would later direct “White Bear” and “White Christmas,” some of the best episodes of Black Mirror (2011-present), Retreat follows Kate (Thandie Newton) and Martin (Cillian Murphy), who like to holiday on a remote and uninhabited island on the west coast of Scotland. With their marriage on the rocks, the couple return to the tiny island in the hopes of reconnecting. But their quiet retreat is interrupted by the arrival of Jack (Jamie Bell), a soldier, who claims a deadly airborne disease is spreading across the world and they must shelter in their cottage to stay safe. It’s maybe not the most comforting movie to watch right now, but Retreat is wonderfully claustrophobic — and a great case for shooting more horror films on isolated Scottish islands where no one can hear you scream. Despite being shot in America, director Lewis Allen’s directorial debut The Uninvited is set on the cliffs of Cornwall, where siblings Rick (Ray Milland) and Pamela Fitzgerald (Ruth Hussey) purchase a suspiciously cheap mansion. Commander Beech (Donald Crisp), who sells them the property, wants to keep his granddaughter Stella (Gail Russell) away from it, but the Fitzgeralds soon let her in. You see, Stella’s mother fell to her death from the cliffs. And some presence within the house seems to be drawing Stella inexorably toward them…

Also known as These Are the Damned, director Joseph Losey’s The Damned is shockingly bleak for a film that opens on a singing motorcycle gang. Taking place in the seaside town of Weymouth in Dorset, the plot centers around Wells (Macdonald Carey), an American tourist, who falls for Joan (Shirley Anne Field), a young woman struggling to escape the clutches of her abusive brother King (Oliver Reed). Running from King, the pair stumble upon an underground cave inhabited by children who are icy to the touch. Unfortunately, these kids are radioactive and are being kept there in the hopes they’ll survive a nuclear apocalypse. The film ends with Wells, Joan, and King, being pursued patiently by the military, who will dispose of them after they die of radiation poisoning… all while the pleas of the imprisoned children are heard coming from the cave. The sea plays a pivotal role in Rebecca, Hitchcock’s masterful take on Daphne du Maurier’s 1938 novel of the same name. Manderley, the grand mansion belonging to Maxim de Winter (Laurence Olivier), has a view of the waters of Cornwall (though the film was shot in California). It is beneath those waters that the body of Rebecca, the first Mrs. de Winter, lies. After Maxim remarries, the bedroom he sleeps in with the second Mrs. de Winter (Joan Fontaine) is on the other side of the mansion, with no view of the sea. But the unquiet water, like the memory Rebecca, is never far away. “Listen to the sea,” instructs Mrs. Danvers (Judith Anderson), the obsessed housekeeper, moments after telling the second Mrs. de Winter that she fancies she still hears Rebecca’s footsteps in the house…

The precursor to Britain’s beloved A Ghost Story for Christmas tradition, Whistle and I’ll Come to You was released as part of the BBC anthology Omnibus and adapts yet another M.R James ghost story (Oh, Whistle, and I’ll Come to You, My Lad). Directed by Jonathan Miller, the film revolves around Parkins (Michael Hordern), a pompous professor visiting the English coast, who blows into a bone whistle he finds beside a grave. Despite claiming not to believe in ghosts, Parkins’ sleep is soon disturbed by haunting visions of a ragged specter pursuing him on the beach — an effect that was achieved, quite superbly, using a piece of fabric on a wire.

Since most audiences didn’t have the chance to enjoy writer-director Rose Glass’s debut feature Saint Maud until very recently, I’m going to put a spoiler warning right here — because I’m about to give away the ending big time. Set in an unnamed seaside town in England, Saint Maud ends with our eponymous protagonist, fresh off a faith-fueled murder, wandering onto the beach dressed in saintly garb before promptly lighting herself on fire. For a tranquil moment, it seems as if Maud’s belief that she is indeed chosen by God for a higher purpose might be accurate as she appears to take angelic shape. Then the scene cuts abruptly to a much darker view of the proceedings: Maud screaming in agony as she burns alive. It’s a disquieting, ambiguous ending, and not something you’d want to see while you’re tucking into your ice cream cone.

Sand dunes are the setting for one of the most unexpectedly terrifying scenes in British horror cinema in director Jerzy Skolimowski’s The Shout. Set on the Devon coastline, the film tells the story of Rachel (Susannah York) and Anthony (John Hurt), whose life is upended when the mysterious Crossley (Alan Bates) invites himself to lunch. Crossley claims to possess an unusual power: his shout can kill a man. After Anthony scoffs, Crossley takes him down to the supposedly deserted beach to prove it. Thanks to some exceptional editing and sound mixing, the sound that comes out of Crossley’s mouth is apt to leave unsuspecting viewers tumbling helplessly down the dunes right along with Anthony. 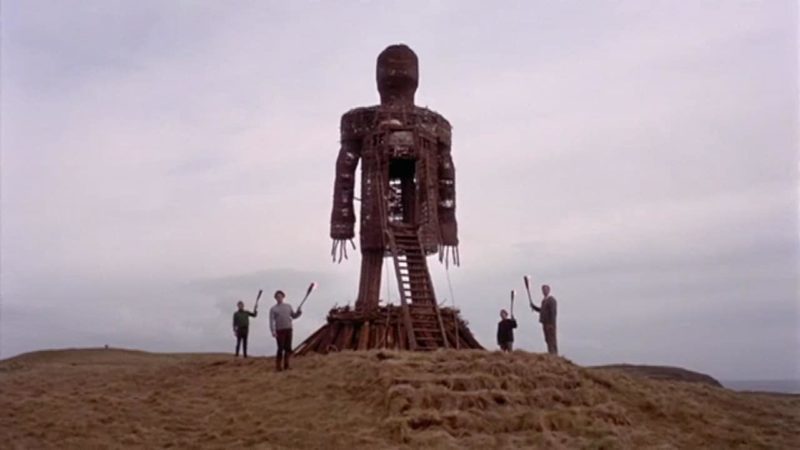 When you think about the climax of The Wicker Man, you probably picture the lush green cliff on which Sergeant Howie (Edward Woodward) meets his harrowing end inside the giant wicker statue he somehow didn’t notice until now. Yet it is on the pebble beach below that Lord Summerisle (Christopher Lee) announces that it’s time for their more dreadful sacrifice. Seeing Rowan (Geraldine Cowper), the girl whose disappearance he was summoned to investigate, standing bound on the rocks, Sergeant Howie makes a brave attempt to save her life — little realizing that he was the intended sacrifice all along. The sound of the gulls circling overhead and the waves crashing on the rocks below is still audible as Sergeant Howie curses the villagers for their actions… before the flames turn his curses and prayers to screams.

Stealing the number one spot from The Wicker Man is no easy task in any contest — but director Jonathan Glazer’s Under the Skin cinches it here with a sequence that will leave you feeling hollow. On a chilly beach in Scotland, Scarlett Johansson’s unnamed and inhuman character begins to chat up a handsome swimmer. But just out of frame, something awful is happening: a woman is drowning. Her partner, frantic, runs in after her, soon succumbing to the water’s lethal pull as well. After the swimmer tries and fails to save them, the alien bashes his head with a rock for his trouble and drags him away… leaving the couple’s now-orphaned infant screaming and alone on the beach. Horrifying in its mundanity, this scene is a stark reminder of just how fast the ocean can turn deadly, making Under the Skin a real bad movie to watch right before going swimming.

Well, our sandcastles have collapsed and the seagulls are closing in, so it’s time we packed up our towels and headed home. Let us know your thoughts on the top British seaside scares us over on Twitter, Reddit, Facebook, and in the official Nightmare on Film Street Discord. Not a social media fan? Get more horror delivered straight to your inbox by joining the Neighbourhood Watch Newsletter — and remember to wait at least 15 minutes after reading this list before going back in the water. 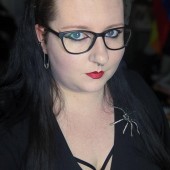