[Awfully Good] JACK FROST is the Coldest of Cold-Blooded Killers.. by Several Degrees! 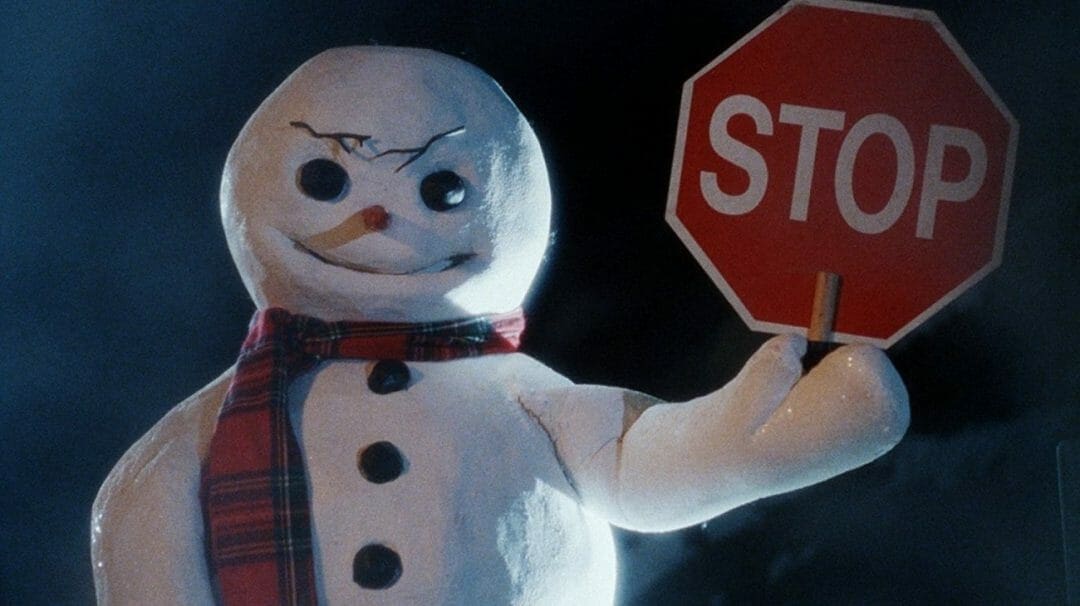 What’s up, weirdos? Welcome to a special happy horror-days installment of Awfully Good, where we celebrate movies that aren’t conventionally attractive. It’s also Cold-Blooded Killers Month here at Nightmare on Film Street, so tonight’s feature *had* to be Jack Frost. Nothing is colder than a snowman with the soul of a serial killer.

Before we get into that, though, let’s cover a couple ground rules. Rule 1) This is not a space for hating on movies, this is a space for loving bad movies. Under no circumstances will we be calling for the heads of producers to be placed on pikes to send a message. Rule 2) Don’t eat yellow snow. Now that we’ve got that out of the way, check out this trailer for 1997’s Jack Frost!

Jack Frost opens with some very festive footage of a Christmas tree with lots of ornaments and soft lighting (also serving as the opening credits, which is cool), and a voiceover conversation where a little girl asks her uncle to tell her a story. The story he picks is one about a serial killer that kept getting away with murder. This goes on for a little too long, and you may find yourself screaming “get to the killer snowman already,” which is something I say at every movie I see and has gotten me banned from two theaters and my ass kicked at three more. Nevertheless, we finally get to the action: the aforementioned (and titular) serial killer is being transported to his awaiting execution. The prison transport takes him through the small town of Snowmonton, the town where Jack was finally arrested. Like all Christmas movies, this leads to the serial killer murdering a guard, the transport van crashing into a science truck full of chemicals, and the serial killer melting into the snow.

Meanwhile, the sheriff of Snowmonton, Sam, can’t stop thinking about the threats that Jack made as he was being carted away. Sam‘s a family man, you see, and so he’s worried that somehow, someway, Jack will get free and kill his son. Also, there’s been a murder most foul, and it isn’t long before more bodies are added to the count. First it’s the hardware store owner, then it’s a bully (a sled murder, which is unironically one of my favorite things to happen in Christmas movies), and it doesn’t show signs of stopping. Now I would never dare spoil anything, but this is the premise of the movie so I feel safe in sharing that all these murders are being committed by Jack Frost, who is now a killer snowman. He has some powers that aren’t super well-defined, but I’m not asking for a thirty-minute scene where a scientist explains what the monster can and can’t do. I just wanna see a snowman go around bodying townsfolk with all manner of festive implements, and this is where the movie shines. The jokes don’t always land, and effects aren’t always “realistic,” but you can tell that a lot of heart went into the kill scenes of this silly little direct-to-video horror movie.

I’m not going to give away the third act of this movie, but I will say that this is where things change from slasher movie to the end of Terminator, where our heroes are stuck trying to figure out how to stop a seemingly unkillable beast. What they eventually settle on is goofy, stupid, and absolutely perfect for this movie. It drags some in the beginning, but the end of Jack Frost is a ton of fun. Because this is a low-budget horror movie, the ending sets up the possibility of a sequel. Real life spoiler alert: a second installment did release a couple years later, with the commendably accurate title Jack Frost 2: Revenge of the Mutant Killer Snowman. I have to give Jack Frost kudos for being a holiday horror movie that doesn’t center around Santa Claus killing a bunch of people. Don’t get me wrong, I love movies that do that, but it’s nice to have another character to throw into the holiday horror villains society. There’s always room at the table for a little variety.

What did you think of Jack Frost? Did you love it? I do! If you haven’t seen it but you like movies about snowmen, and murder, and snowmen who commit murder, this is probably your best bet. You might be lucky enough to find it on VHS if your thrift stores are pretty good, but if you prefer to see things in 2K restoration you’ll need to shell out for the very impressive Vinegar Syndrome release. The art on that thing is cool as hell! Just make sure that when you buy this movie, you don’t accidentally get 1998’s Jack Frost, a movie starring Michael Keaton that is barely even about serial killers. What “bad” holiday horror movies do you like to watch this time of year? There are a lot of great options, like Silent Night, Deadly Night, Santa Claus Conquers the Martians, the bizarre Mexican film where Santa Claus and his roommate Merlin live on the moon(?) and fight the devil(!), and It’s A Wonderful Life. Let us know what you’re watching this month over on Twitter, Instagram, Reddit, and the Horror Fiends of NOFS Facebook page! And for more reviews, retrospectives, and other fun stuff, stay tuned to Nightmare on Film Street. You can even peek before Christmas!

One last thing: so Jack Frost is a killer snowman, and snow only happens below zero degrees Canadian (thirty-two degrees American), so Jack Frost is arguably the coldest-blooded cold-blooded killer of all. This, of course, means that I win this month. Better luck next time, everybody.