Matthew Pope’s directorial debut Blood On Her Name is a tense neo-noir film about the lengths one woman will go to try and protect herself and her son. Leigh (played by Bethany Anne Lind) is a drug-addicted mechanic who accidentally kills a man. In a tense 90 minutes, Leigh tries to hide her crimes while also grappling with what it means to do the right thing. It is tense, it is anxiety-inducing, it is phenomenal. In his review out of Fantasia 2019, our Jonathan Dehaan said, “Packing more tension than a person should be allowed to endure, this movie should only be shown in the emergency room – where pacing back and forth, waiting for the bottom to drop out from underneath you is at least how you’re expected to feel”.

Much of the film’s success is thanks to Lind’s powerhouse performance as Leigh. She is almost always onscreen and never misses a beat as a tortured woman who can’t catch a break. I was able to speak with Lind about this complicated role and what it meant to portray a different kind of mother.

Mary Beth McAndrews for Nightmare on Film Street: What attracted you to this project and being a part of the film?

Bethany Lind: I had worked with Matt Pope, a director for almost 10 years on just lots of smaller projects. We just worked really well together and always felt like the same fun set and a good environment. I knew that he and his writing partner, Don [Thompson], wanted to do something bigger. They sent me the script of this one, and I read it really fast and was just blown away by the story, but then of course as an actor by the character. I had never gotten to explore anything quite that intense before. I feel like you don’t get to see women who are just like both the victims and perpetrators.

Some really bad things have happened to her [Leigh] that she had no control over. She has not had the best life. At the same time, she’s also made some really bad choices that she did have control over. And so this character has all these layers of both. Bad things that have happened to her and then bad choices that she’s made and that’s where she is now. And I love that it starts there, too. Like, okay, we can’t do anything about what’s happened to this point. Now, what do you do? And she’s just a normal person. She’s not a superhero, she’s not super smart or super dumb. She’s just pretty normal and what would a normal person do in these circumstances? And that’s what they wanted to explore: the drama of normal people.

“I had never gotten to explore anything quite that intense before.”

NOFS: That’s what I love about this film too, because your character is messy, just to put it in one word. And like you said, I don’t feel like a lot of female characters are allowed to be messy. I feel like they’re either really good or really bad and there’s no, kind of, gray area complexity to that. What was it like to portray that? You read it and loved it, but what was it like to kind of get into that mindset of such a character?

BL: It was kind of rough, honestly. We shot for five weeks, five days a week. So it was nice that we had two days off, but we were doing long days, like 12, 13, 14 hour days. And then I’m literally in every scene, which is how they wrote it. They wanted it to be her perspective; it’s her story. But there was no break for me. And yeah, it was, I mean, probably the last week I was having nightmares that I was trying to hide a body. So who knows what that does to a person long term? I’ll find out. But I think it’s the best way to do that story because we were all just immersed in it the whole time. There wasn’t time to take a break and a vacation, come back to it, refreshed. That’s another thing with her: she hasn’t slept through the whole four or five days. She was making those decisions sleep deprived.

MBM: So this movie feels like a revenge movie, but not really. And I’m really fascinated with revenge films, especially where women are at the center of them. I was wondering have you ever been fascinated with that concept of revenge and what was it like kind of exploring the ethics of revenge in the film?

BL: I think it’s interesting because I guess it’s sort of about rage, too. And again like women aren’t always allowed to express or explore and yeah, I’m very interested in it, and especially with #MeToo movements that are happening right now. It’s clear that women are done.

But at the same time, I don’t see it as “I’m a woman, I’m doing this because I’m a woman.” She was just a person reacting to things that are happening because of choices she’s made and choices other people have made. I was in a show called Reprisal, which is very much a revenge story centered around the main character, who’s a woman but my character also is an abused housewife and gets to enact some serious revenge. So for me, that was more of like exploring that aspect.

NOFS: I think it’s interesting because, throughout the film, she is trying to kind of forge a space in a very masculine space. At the end of the film, it’s almost like men don’t matter. It is really about is two women trying to protect their own, which is I think really profound and I also feel like a lot of times in movies about mothers, again, mothers are put into like very specific boxes. Did you think that the film was going to put a certain box around the role of women in film?

BL: I remember when I first read [the script], I was actually really nervous that people would not empathize with her because she’s a mother. Because she was a mother and takes pills and is not [the] feminine nurturing type that a mother is, you know, “supposed to be.” I was afraid that people would judge the character because they weren’t making the right feminine choice, more or less.

So I remember one of the first questions I asked was, “Will the audience forgive her for taking the pill?” For dropping your kid off and like doing drugs, which that’s not for me to worry about. I know all I need to worry about is why she does what she does. But yeah, it was definitely a worry for me at the beginning. Will they dismiss her and not empathize with her on her journey because you expect mothers to embody all of this?

I am a mom, I have a three-year-old and a five-year-old and so I certainly just related to all of that instinct. So I’m glad that they are giving voice to this sort of very different kind of mother.

“It was kind of rough, honestly […] the last week I was having nightmares that I was trying to hide a body.”

Blood on Her Name is in select US theatre and VOD now! Let us know what you thought of the film, and of Bethany Anne Lind’s performance over on Twitter, Reddit, and in the Horror Fiends of Nightmare on Film Street Facebook group! 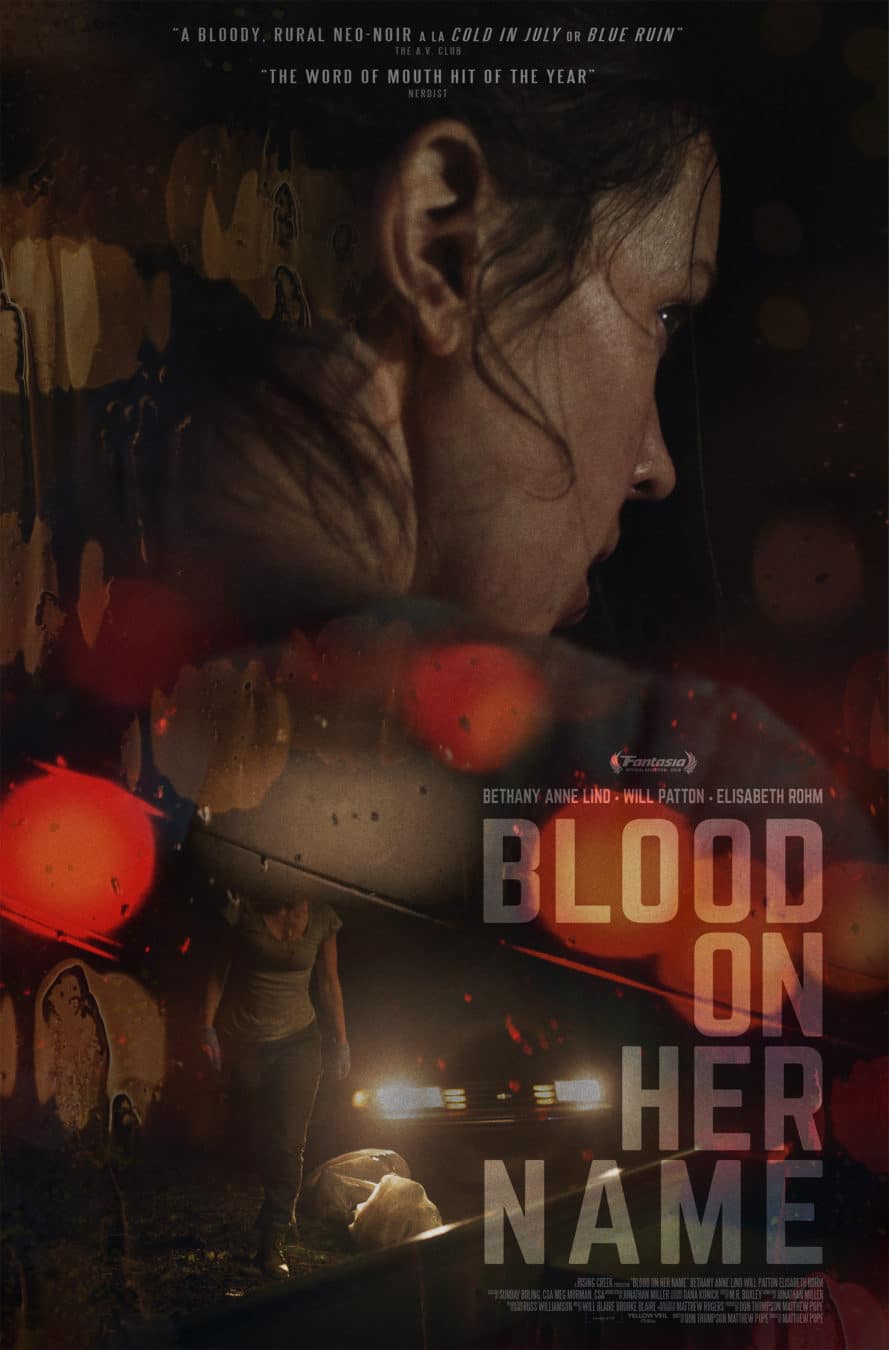