[Fantastic Fest 2019 Review] THE PLATFORM Is a Delicious Dystopian Morsel Few films dare to brave a simple premise. With Hollywood building CGI skyscrapers of Superheroes and Transformers, one has to do a deep dive to find a film that explores the subtler side of cinema. The Platform, which celebrated its U.S Premiere at Fantastic Fest 2019, is one of those rare morsels. A film that drops you into a world not too unlike the one you live in, and slowly but surely feeds you some very weird, very twisted pills to swallow.

It’s as if Director Galder Gaztelu-Urrutia (in his feature debut, no less) wanted The Platform to have all the puzzling and bloodsport of Vincenzo Natali’s Cube, with the added class segregation of The Titanic (the ship, not the movie. Or, I guess the ship and the movie?). 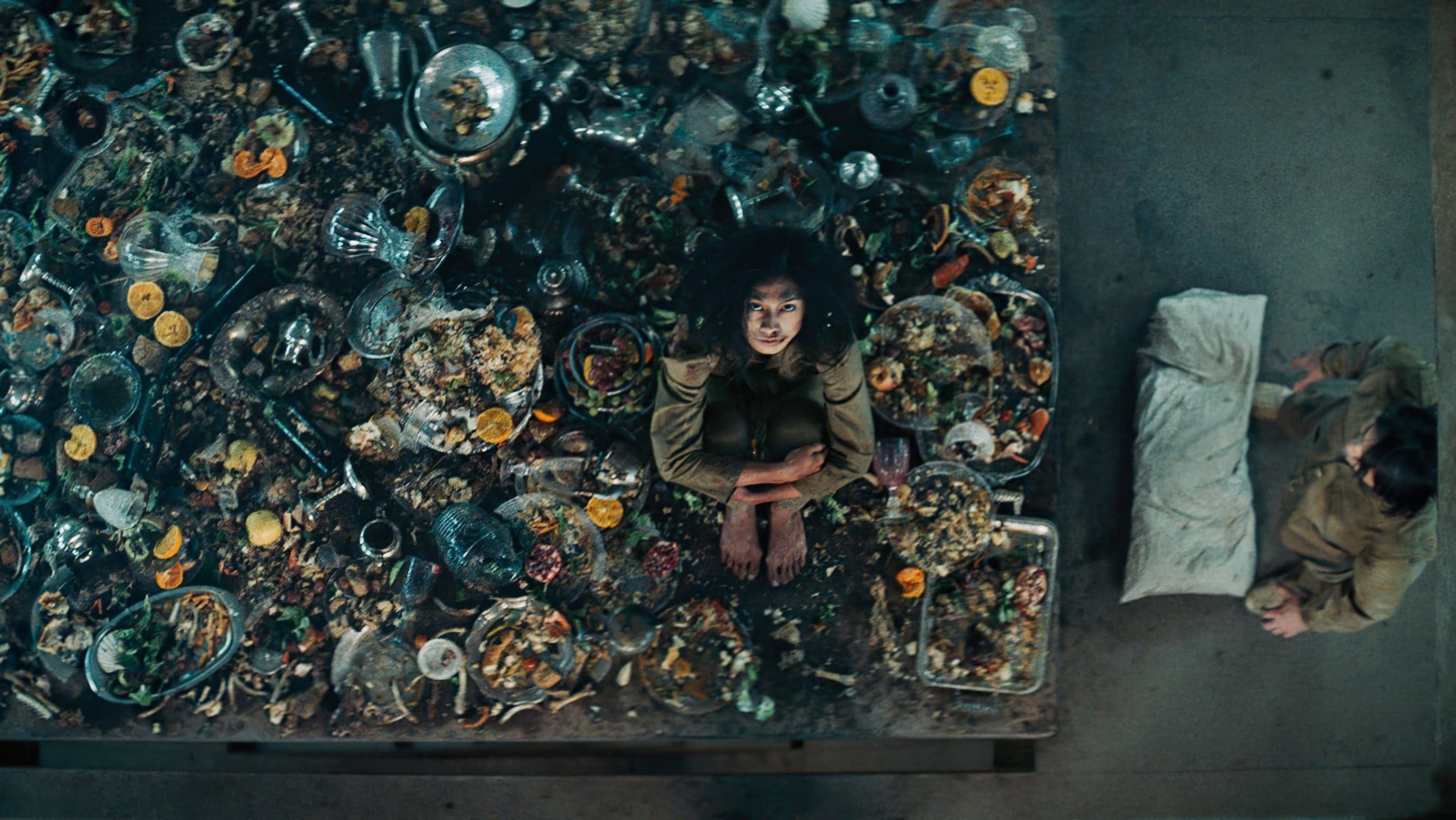 The Platform starts when Goreng (Ivan Massagué) opens his eyes. Well, it starts for us when Goreng opens his eyes. The world of The Platform seems to have been running on twisted status quo long before he arrived. The prison is unlike anything that exists in our current world, but still easily discernible as a prison cell. Concrete walls and floor, two small cots, a tiny toilet/sink combination. What makes this prison different is that each ‘cell’ is stacked vertically atop carbon copy concrete prisons, with a rectangular hole in the center of each that passes through to the cell below.

It is through this hole that food is served to the prisoners. Every day, a platform, hovering by means of mechanics unknown or witchery unimportant, drops into each tier for a short window of about 30-seconds or so. The two prisoners scarf and shovel as much food as they can into their gullets before the platform drops down to the tier below, and so on. The platform isn’t replenished. Those at the top are served a Michelin 3 star tier spread; wine, escargot, delicate cakes, flambes and souffles. Those at the bottom.. get nothing.

Goreng’s first cellmate, the quirky and bitter Trimagasi (Zorion Eguileor), helps get Goreng up to speed. You are not allowed to keep food from the platform. Once it leaves, everything unconsumed must leave with it. Tiers are assigned randomly each month. At the end of the month, everyone is gassed and passes out. When they wake up, they are on an entirely new level. The higher you are, the more likely you’re to receive a meal. Those at the top live out the month comfortably. Those at the bottom fight for survival. Murder, cannibalism, illness and madness touch the levels food does not.

Goreng, at first, isn’t cool with the conditions he’s been thrown into. He tries to convince the tiers around him to ration and save portions for those below. But everyone, having survived this random Rubix cube of ‘Will I eat this month’ to a tier that has food, are living in a dog eat dog world. Screw the ones at the bottom, screw the ones at the top.

Goreng will fight his way through a world built on randomly assigned status, trying to navigate what is good, what is right, and how resources should be dispersed from the top down. The Platform excels in its simplicity. We get very few glimpses outside the four concrete walls of the prison, and when we do, they are vague. Chefs preparing exquisite dishes, the sterling silver serving dishes being assembled on the platform before it drops into the madness below. We will never see the world The Platform exists in. But we don’t need to. The Platform is a perfect allegory for the world we presently live in. A commentary on class structure, birthrights, and economics, ornately laid out and presented as a not-quite-science-fiction, quasi-dystopian thriller.

“The Platform is a perfect allegory for the world we presently live in. A commentary on class structure, birthrights, and economics, ornately laid out and presented as a not-quite-science-fiction, quasi-dystopian thriller.”

How does one change a system set in stone?  If one cannot go up, can they change the world by changing the system underneath? So many deep questions are evoked, all by Goreng and the deceptively simple Platform.

The Platform was a sleeper surprise for me. I knew very little going into it, and when I left the screening, I could talk of little else. I spent much of that night trying to hunt out other people that had attended my screening, wondering how the film impacted them and if they too left with the same, rock hard peach pit in their stomachs as I had. Understated but still beautifully confronting, The Platform will definitely make dinner conversations a lot more exciting. Or at least make the companions at the table.. a little more grateful.

The Platform celebrated its U.S. premiere at the 2019 Fantastic Fest in Austin, Texas. Read all of the coverage of our festival here, and join the conversation with the Nightmare on Film Street community over on Twitter, Reddit, and in the Horror Movie Fiend Club!

TLDR The Platform is a perfect allegory for the world we presently live in. A commentary on class structure, birthrights, and economics, ornately laid out and presented as a not-quite-science-fiction, quasi-dystopian thriller.