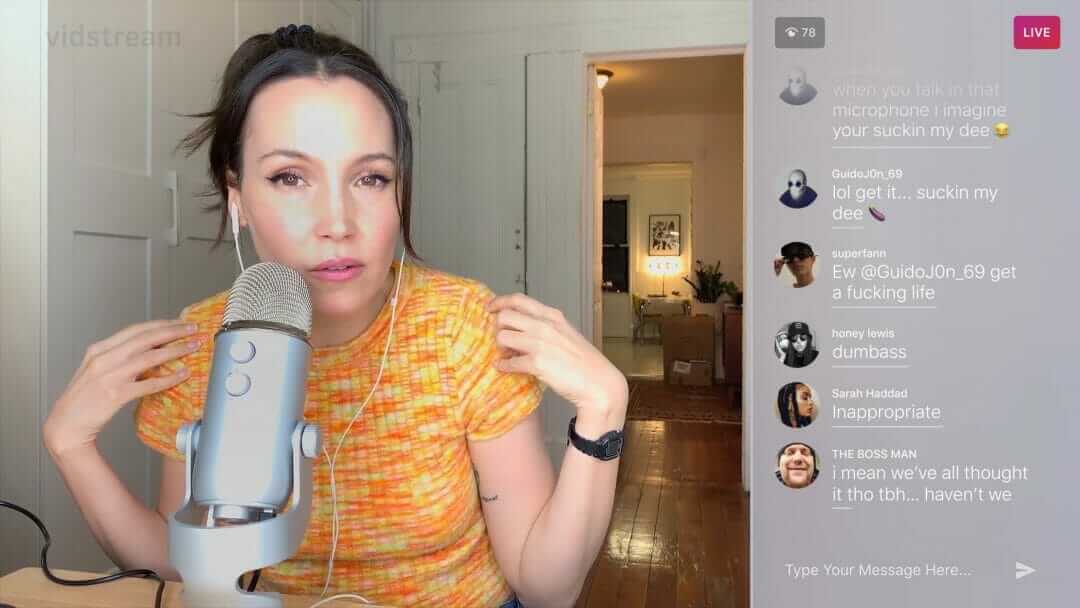 Perched in front of a microphone, a young woman whispers about her day while drumming her fingers on a desk or on the microphone itself. She clicks her tongue, brushes her fingers across the camera, and speaks ever so softly to her viewers. This is the life of someone who makes ASMR YouTube videos, also known as an ASMRtist. ASMR, or Autonomous Sensory Meridian Response, is the tingling sensation caused when hearing certain sounds or watching certain actions. This subgenre of YouTube is the subject of Alexandra Serio’s short film, Tingle Monsters.

In Tingle Monsters, a young ASMRtist, played by Serio, starts a live stream after a long absence from her channel. She interacts with her fans and whispers about how much she missed them but had to move after a break-up. Over the course of the short film, she discovers how quickly fans can become nasty and other more real consequences of being online (Serio asked we not spoil the film’s ending).

“ASMR is a way to achieve digital intimacy,”

Serio herself is a big fan of ASMR videos, which inspired the project. “The way people listen to podcasts is how I listen to ASMR,” she said. But more than ASMR, she was inspired by the ways women are treated online and how their interactions can turn sour so quickly. This specific community is all about creating a safe space, a phrase that can be a slippery slope when used online. However, ASMRtists, according to Serio, want to use their videos to cultivate a community. They want to provide something to those out there that may feel lonely; their videos are an object of comfort.

“ASMR is a way to achieve digital intimacy,” said Serio. It is a method for people to reach other people through eliciting a positive reaction. While many may think ASMR is sexual in nature (and it certainly can be) it is more often about comfort and relaxation. While ASMR personally feels like nails on a chalkboard for me, I know quite a few people who use it to fall asleep or calm down before a panic attack. These ASMRtists are providing an online resource to those who need it.

“Most ASMRtists just use ring lights and shoot in their bedrooms, so I wanted to emulate that,”

The whole community around these videos is complex, and Serio does an impeccable job of taking her knowledge of that community and putting it in a horror context. Through the live chat on the right side of the screen, the viewer can read the love pouring in for her, but also the vitriol from online trolls. These communities are often microcosms of the Internet, which Serio portrays in Tingle Monsters.

When creating the film’s look, Serio said, “it was crucial for this to feel real.” There is no score or extra design elements. It all takes place in one room in one take, again emulating what a live stream really does feel like. She worked with designer Kostyantin Bakalow to create the graphics that make the film look like an actual live stream. Serio explained that many of these creators host weekly live streams to interact with their community, so she wanted to capture that feeling of faux closeness. “He asked me about the lighting and if I wanted to fix it to make it more professional. I said no, that’s not the point! Most ASMRtists just use ring lights and shoot in their bedrooms, so I wanted to emulate that,” said Serio.

“Serio is able to capture the fear and frustration of being a creator in the age of the Internet.”

Being a woman on the Internet is inherently risky. Many of us are writers and creators who just want to share our passions with the world. However, we are often met with opposition or mansplaining; our talents are ignored and all that seems to matter is that we are women. Serio is able to capture the fear and frustration of being a creator in the age of the Internet. We just want to create our own communities and spaces, and we do what we can to defend ourselves from online abuse. But what happens when that abuse leaks through the digital space and into reality?

In her director statement, Serio said, “I firmly believe that through gender parity and telling women-driven narratives we can begin to change the world. But we must start by taking a sobering look at where we currently are.” Tingle Monsters does just that and grapples with the very real horrors of the online world.

Tingle Monsters is set for online release May 20, 2020. Let us know your thoughts on the ASMR Short over on Twitter, Instagram, Reddit, and in the Horror Fiends of Nightmare on Film Street Facebook group!