A remake, 65 million years in the making.

I know, I know. The high dollar film industry is drowning in rehashed material while the original idea pool is very shallow. Why would anyone want to see a remake of Steven Spielberg’s 1993 earth-shattering adaptation of Michael Crichton’s Jurassic Park? The film, with it’s groundbreaking use of animatronics and the beginnings of CGI, holds up incredibly well nearly 30 years later. Well, it’s quite simple. For those who have read Crichton’s novel, you already have a head start on why it begs for a true adaptation. For those who haven’t, and those unfamiliar with the fascinating history of who almost had their hands on the beloved franchise, strap in your seatbelt. And for anyone who simply loves horror, which surely you do if you’re reading this, hold onto your butts. The thought of remaking such a cinematic triumph as Jurassic Park never really hit home until I happened upon an article a few years ago. In a 2018 interview with the Huffington Post, director James Cameron revealed for the first time that he had inquired about the film adaptation rights to Michael Crichton’s novel, but his call came in just mere hours after Steven Spielberg secured them himself. After seeing Spielberg’s finished film, Cameron felt the story fell into the right hands. “He made a dinosaur movie for kids, and mine would have been Aliens with dinosaurs, and that wouldn’t have been fair. Dinosaurs are for eight-year-olds. We can all enjoy it, too, but kids get dinosaurs and they should not have been excluded for that. His sensibility was right for that film, I’d have gone further, nastier, much nastier.”

My soul has wept ever since I laid eyes on this.

Cameron was half right. Dinosaurs are for everyone, especially kids. Jurassic Park is not. Without full-blown reviewing Crichton’s masterpiece, and it is a masterpiece, the story is far from family-friendly. In a nutshell, Jurassic Park is a science fiction horror story of the dangers of genetic engineering and the ramifications of unchecked power. Mankind develops the capability to clone extinct dinosaurs, without fully understanding power of nature they are handling. Cost cutting, greed, and oversight lead to their creations escaping, at the steep cost of horrific human casualties. Considering James Cameron’s filmography boasts the likes of The Terminator and Aliens, both films with eerily similar conflicts of morality vs. science, allowing him the chance to tell Crichton’s story would be a match made in horror heaven. 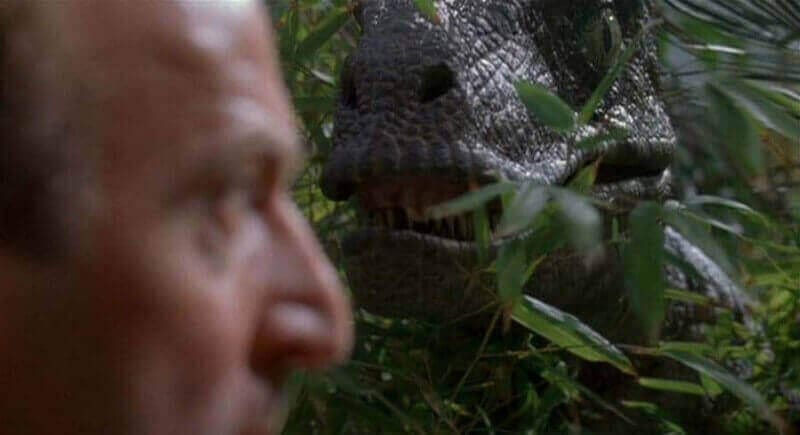 Any director considering remaking a film should always have an answer to the simple question – why? How much can be done differently to make a brand new version unique and accepted, especially when dealing with material as popular and beloved as Jurassic Park? Fortunately for whoever hypothetically would take up this challenge, the answer is – a lot. Even more fortunate, all of the material already exists – in Crichton’s novel. While Steven Spielberg’s film adaptation is considered faithful to the book, there are major differences abound. Notably, as mentioned above, Jurassic Park is a horror story, and much of what is missing from Spielberg’s film is these sequences of horror and suspense. I’ve picked out just a few elements of the novel that never made it to the theatre.

It Begins with a Mystery –

Jurassic Park begins with a series of accidents plaguing Costa Rica involving animal attacks from unknown species. This includes a crazy sequence of a construction worker employed on the nearby island of…Isla Nublar…being flown via helicopter to the hospital with deep gashes in his torso, which are covered in saliva. The only word he gets out before violently dying is “raptor”. Paleontologists Alan Grant and Ellie Satler are brought in almost as coroners, to confirm that one of the attacking animals was the extinct Procompsognathus. The Deaths are Spectacularly Intense

Speaking of violent deaths, the novel is packed with them. Dennis Nedry‘s iconic death at the hands of a Dilophosaurus is much more brutal than in the film. The park saboteur gets lifted off the ground in the jaws of the dinosaur, while he feels the warm slipperiness of HIS INTESTINES spilling out of him. Dr. Grant poisons attacking Velociraptors with eggs injected with neurotoxins, while game warden Robert Muldoon literally blows up one of the Raptors with a rocket launcher. Many of the surviving characters in the film die horrific deaths in the book. If you’ve read Jurassic Park and love horror, the untapped potential in these alone is vast. 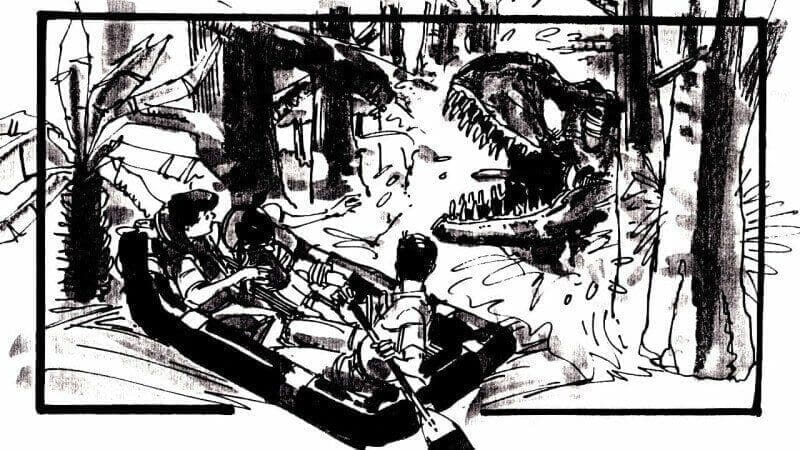 The Suspense is Constant and Unforgiving

While Spielberg’s film adaptation has plenty of tension, the novel goes exceptionally further. There’s a race against time as the people trapped on the island try to make contact with a ship heading for mainland Costa Rica – with stowaway Velociraptors on board. Another great sequence finds Raptors chewing their way through barred skylights in the park hotel to reach the trapped survivors. Perhaps the most well-known omission from the film follows an intense river raft chase involving a Tyrannosaurus Rex swimming underwater in pursuit. A fun fact – Spielberg removed this river chase from the script due to his infamous prior experience with animatronics and their distaste for water in Jaws. 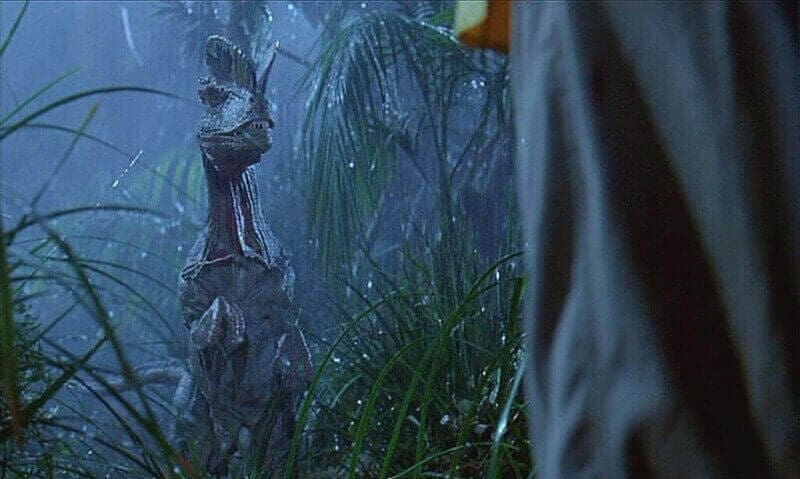 If you’ve read Michael Crichton’s work, you know that the basis for his novels from Jurassic Park to The Andromeda Strain is science. While the concept that dinosaur DNA can be harvested from preserved mosquitoes is far beyond our current abilities, it is based upon actual genetic science. The character of mathematician Ian Malcolm spends much of the novel scolding the park creators with elements of chaos theory, which Dictionary.com defines as “the branch of mathematics that deals with complex systems whose behavior is highly sensitive to slight changes in conditions, so that small alterations can give rise to strikingly great consequences.” Briefly mentioned in the film, the dinosaurs are bred deficient of the amino acid lysine, and are required it be supplied to them – preventing them from surviving if they escaped the island. While it may seem unnecessary, the science background of Jurassic Park lends credence to the idea that it actually could happen – a staple in good horror films. “It could happen to you.” 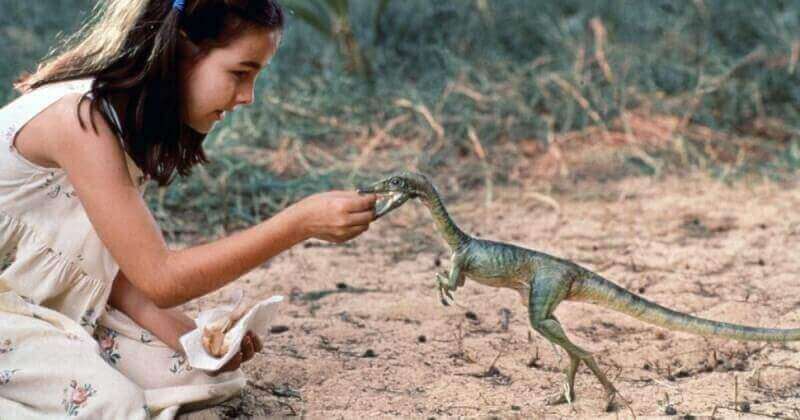 No One is Safe

As mentioned, many characters that survived in the film do not survive the novel. More importantly, no level of morality, status, or even age is safe from the prehistoric predators. While we can award any which one of the terrifying carnivores in the film with the most gruesome death sequence, it’s actually the chicken-sized Procompsognathus that deliver the most brutal death in the entire Jurassic Park universe. Having escaped Isla Nublar onto mainland Costa Rica, the dinosaurs are found feasting on a baby’s face by a surely traumatized midwife. It’s elements like this that distinguish the novel from the film, and bring a sense of morbid reality to the premise that the films lack. Dinosaurs would not discriminate when choosing their meals. They’re not just going to choose the greedy lawyer or the power hungry army captain. Velociraptors Are Not Your Friend.

In many ways, the Jurassic Park franchise is no different than some of our favorite horror series. Specifically, when a film series goes on too long, things begin to go awry. Reboots and remakes are the natural next step, which is basically what happened with 2015’s Jurassic World. While an original story and a continuation of it’s predecessors at the same time, it’s most basic premise is the same as Jurassic Park. Dinosaurs escape an island theme park and wreak havoc. Unfortunately for horror fans and fans of Crichton’s novel, this is where the similarities end. Jurassic World pushed the series into full blown, family-friendly, summer blockbuster simplicity.

Sorely missing from the new installments is the science and pseudo-science that are trademarks of Michael Crichton’s work. Next, only the “bad guys” face the wrath of the dinosaurs while everyone we are told to care about survives, a blockbuster trope far removed from the victims featured in the novel. By far the worst offense – the velociraptors, essentially the slasher film serial killers in both the original novel and Spielberg’s version, are now trained puppies fighting alongside humans. While Spielberg started this slide a la the T-Rex “saving the humans” from the raptors in the 1993 film (a scenario not found in the novel), the transition from theme park monsters to sympathetic, heroic protagonists became a defining motif in the Jurassic World series.

Unfortunately, when Michael Crichton died of cancer in 2008, the elements that made the Jurassic Park franchise tick passed with him. This became evident once the franchise stopped using his writing in 2001’s Jurassic Park 3. As an audience, we’ve been gifted with Spielberg’s rendition of the story, a perfect blend of the source material toned down for all ages to see. Jurassic World and it’s sequels spawned from this, specifically made for children on summer vacation. Five films deep and awaiting the sixth, Jurassic World: Dominion, we are now so far removed from the whole premise of Crichton’s novel that it seems only the word Jurassic ties it all together. Let’s see Jurassic Park for the science fiction horror epic that it is. Nearing 30 years since we were truly given dinosaurs on the big screen for the first time, I believe it’s finally safe to say it – give us the remake.