[Podcast] Nightmare Alley: Talking Art and Monsters in ALLEGORIA With Spider One and Krsy Fox

Art goes EVIL! We’re talking horror anthology ALLEGORIA on this brand new Nightmare Alley edition of the Nightmare on Film Street horror podcast! Your hosts Kim and Jon are joined by the film’s creators, writer/director/producer Spider One and actress/editor/producer Krsy Fox! We get a behind-the-scenes look at the emotionally-charged monster fest that haunts the creative souls at its disposal. We talk monster-making, the editing process, how the film’s idea was conceived, and more!  Allegoria is streaming now on Shudder.  Joinn usss..

Unlock access to exclusive bonus content and earn some other frightfully good rewards; including watch parties, merch discounts, and swag (like membership cards, stickers, and temporary tattoos!) by joining the Nightmare on Film Street Fiend Club. This week, Fiend Club members have instant access to Nightmare on Film Street’s SPOILER-FILLED discussion of Jordan Peele’s Nope. If you want to hear our full, unrestraints thought’s on the summer’s coolest, spookiest, UFOiest blockbuster, join the Fiend Club for all our unfiltered opinions and our wild, crazy fan theories. 🛸 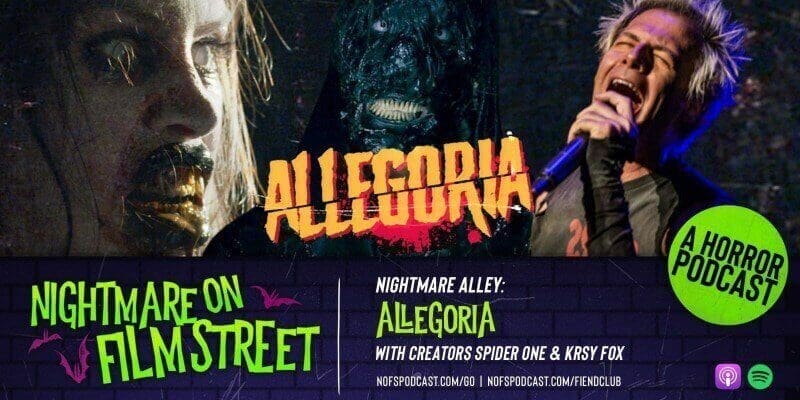