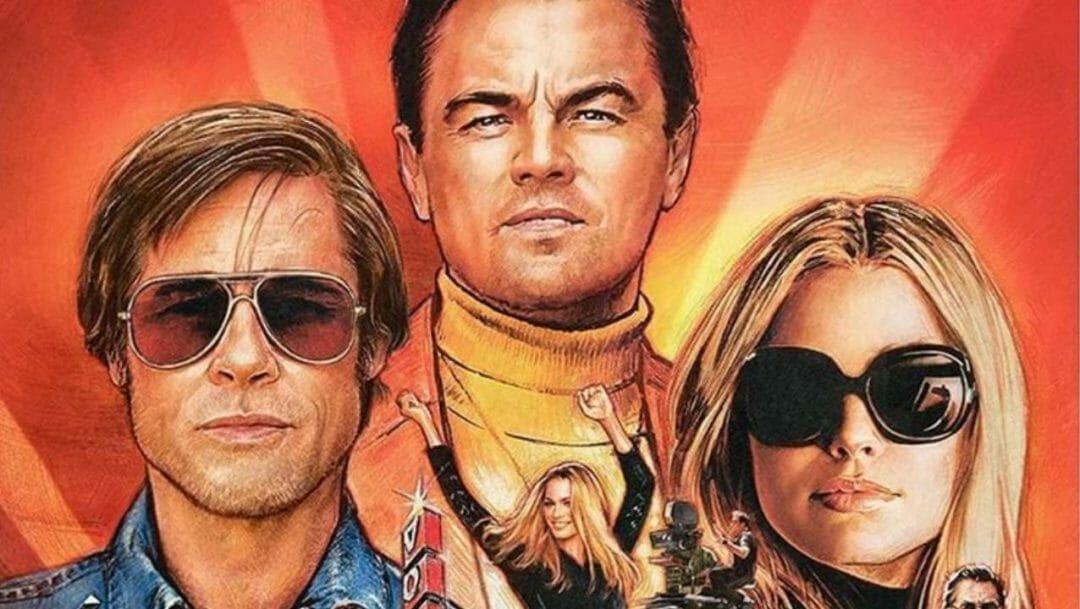 I’m going to do my best to keep this brief, because if you haven’t yet seen Quentin Tarantino’s Once Upon A Time…in Hollywood you have nearly 3 hours of sun-soaked highways, bare feet on dashboards, and down-and-out tough guys hitting the town one last victory ride ahead of you. Also, there has been no shortage of reviews from Cannes to California calling the film Tarantino’s Best! and The Most Fun You’ll Have in The Theatre All Summer! Heck, they were even handing out posters at my local cinema that included Time magazine’s full review of the film on the bottom half, which was also blown up into a full 7-foot standee at the other end of the theatre. An odd choice, but odd choices are par for the course in a Tarantino film.

I, like most boys, have been a Quentin Tarantino fan my entire life, but I really don’t think this movie was made for me. That isn’t to say that I didn’t like it, but I really do think Once Upon A Time…in Hollywood is too much of a love letter to Los Angeles for anyone outside of the city (and the movie business) to really feel that love. I can see it, I definitely understand it, but I don’t know that I will ever truly appreciate what he’s captured unless I am a part of that world. Which I find interesting because Tarantino must, in some part, feel the same way peering through a lense-view of a Hollywood that came *just* before him. He no doubt has a love for Los Angeles, and for its history, but there is also a longing for something that could have been. A longing that has likely informed the sensibility of his last three films.

“In Tarantino’s world, Jewish soldiers became the boogeymen that struck fear in the hearts of the worst Nazis, and former slaves were given license to kill the cruel plantation owners of the South. Once Upon A Time…in Hollywood follows tradition, presenting us with the Hollywood that could have been.”

Our Hollywood fairytale opens with Rick Dalton (Leonardo DiCaprio), a successful television actor that risked it all, and lost it all, in an attempt to break into big-time Hollywood films. His best friend/hired-hand/stunt double Cliff Booth (Brad Pitt) drives him to and fro, offering emotional support and reassurance that he still has what it takes. “You’re Rick f*cking Dalton, and don’t you forget it” he reminds him before sending him off to play a role that Rick worries might be doing his career more harm than good. (You’ve seen the trailers!) Simultaneously, as the era of leading men like Rick Dalton is fading fast, new hip talent like Sharon Tate and Roman Polansky have staked their claim in town and Hollywood is eating them up. It’s the end of an era for men that built their career in direct opposition to the hippie lifestyle, but times they are a-changing and as Steve McQueen soliloquizes like a Greek chorus witnessing a tragedy unfold, “We never stood a chance”. And yet, Dalton continues to climb a seemingly impossible mountain in hopes that when he reaches the peak, the gates will finally open for him and he will be welcome into that promised land with open arms.

Circling these two groups is a dark future of a third kind that each encounter in different ways, unaware that forces beyond their control are bringing them closer and closer together. The Manson Family were a catalyst that stunted the growth of something Nostalgians (probably not a real world, but here we are) call beautiful. At the very least, we can all agree they represented the dark side of the hippie drug culture, that when left unchecked and unguarded from manipulative madmen, ruined the lives of so many people. Their involvement in the film is a shared experience that brings characters together, unlike the very real stake it drove through our own world — separating 1969 into people you knew and could trust, and strangers that would surely kill you. It’s a fear that continues to cut through America and shapes how we see each other on a dark night. There was a time when Tarantino movies were unstuck in time. Modern weapons, throwback camera techniques, futuristic violence, and language cobbled from several decades helped create a world that could have been 1992 just as easily as it could have 2022. His last few pictures have been very set on pinpointing exactly where in time they are, playing loose with facts rather than fashions. Artists are commonly said to be holding a mirror to the world they see, and there’s no debating that Quentin Tarantinos is an artist, but his vision is of a world he would rather see. In Tarantino’s world, Jewish soldiers became the boogeymen that struck fear in the hearts of the worst Nazis, and former slaves were given license to kill the cruel plantation owners of the South. Once Upon A Time…in Hollywood follows tradition, presenting us with the Hollywood that could have been. A Hollywood that Hollywood would gladly accept if it had the power to rewrite history.

A Tarantino film is a blend of every genre in existence, borrowing from prestige cinema, exploitation staples, and forgotten gems. The Tarantino playbook is built on a love of cinema, paying homage to artists that inspire him. And now, finally reaching an era that so closely resembles the stylistic choices of his entire career, it’s strange that Once Upon A Time…in Hollywood would feel like the least Tarantino film that Tarantino has ever done. We cruise down sunset boulevard, trip down memory lane to the set of The Green Hornet, and hide-away in the corner booths of Mexican restaurants. All beautifully shot and expertly dressed, but somehow stand out as unique in his oeuvre. They are by no means “sore thumbs” but it is interesting to see a filmmaker so dedicated to reimagining the world around him (a filmmaker who is outspoken about this being his 9th of 10 films) redefining what a Tarantino film is.

“..while it’s impossible to rewrite history, Tarantino and Hollywood at large will continue to change the world around them through film, until what they see better reflects a world we wish we knew.”

The laidback California attitude of Once Upon A Time…in Hollywood was not something I expected, and I spent maybe half of the film trying to get in sync with. Once I was there, I felt like I was sitting in a comfy chair, enjoying the feel of the sun on my face without worrying about when it would end. Until that moment, I had a genuine concern that I would have to leave the theatre and defend my displeasure with the carefree wandering spirit of this LA story. And while I can recognize the lighting that’s been captured in this particular bottle, I will have to take people at their word when they tell me that this film the perfect distillation of that LA life. With its love for the freeway, the hills, and landmark cinemas, it’s a story that (at times) feels as inaccessible as Hollywood is to anyone outside the biz.

Unlike the tightly woven storylines that tie characters to one another in Tarantinos other films, almost fating them to point guns at each other, Once Upon A Time…in Hollywood has our main players float around each other on a lazy river of plot progression. Rather than characters converging on each other because of a shared obsession that drives their motivations, Rick, Booth, The Mansons, and Sharon Tate’s entourage stumble into each other the way you might cross paths with someone at a coffee shop who you met once through mutual friends. Very LA, I’m sure. But I’ve carelessly gone on far too long without mentioning the absolutely brilliant performances from Margot Robbie, Leonardo DiCaprio, and Brad Pitt. DiCaprio shows a vulnerability that I’m sure every actor can relate to, but even Dalton’s most self-gratifying moments are no match for the joy bursting from Robbie’s Tate, ecstatic for the life ahead of her- a side of Tate we are rarely reminded of, for obvious reasons. And Pitt takes home the MVP award for his performance as Cliff, the coolest, toughest, and most down-to-earth best friend a sadsack like Dalton could ask for. He does all Dalton’s dirty work (on and off set), always letting Dalton jump in to take one last close-up, and all the credit.

Once Upon A Time…in Hollywood was by no means the movie I was expecting to see, but it’s refreshing to know that a filmmaker (self-reportedly nearing the end of his career) can still surprise you. I had a lot of doors to pass through before I found myself where I needed to be, but it was a journey I’d gladly take again and an alternate vision of Hollywood that no one would ever say no to. So rarely do films attempting to turn back time make you wish for the ability to change the world. And while it’s impossible to rewrite history, Tarantino and Hollywood at large will continue to change the world around them through film, until what they see better reflects a world we wish we knew.

TLDR ONCE UPON A TIME...IN HOLLYWOOD was by no means the movie I was expecting to see, but it's refreshing to know that a filmmaker (self-reportedly nearing the end of his career) can still surprise you. I had a lot of doors to pass through before I found myself where I needed to be but it was a journey I'd gladly take again, and an alternate vision of Hollywood that no one would ever say no to. So rarely do films attempting to turn back time make you wish for the ability to change the world. And while it's impossible to rewrite history, Tarantino and Hollywood at large will continue to change the world around them through film, until what they see better reflects the world we wish we knew.