[Review] Come for the Cult, Stay for the Queer Representation in HALLOWED GROUND

Secluded cabins are a place for relaxation. Limited cell service, no neighbors, and the sounds of nature drift through the trees, an idyllic place to hit the reset button and disconnect from a hectic world. But we also know that a secluded cabin is a perfect place for a horror film. No cell service? You can’t call for help. No neighbors? No one can hear you scream. But in the case of Miles Doleac’s  Hallowed Ground, there are neighbors, but they are in a centuries-old cult that demands blood sacrifice.

Married couple Alice (Lindsay Anne Williams, The Hollow) and Vera (Sherri Eakin, Preacher) are heading to a secluded cabin for a romantic weekend to try and repair their relationship. It is quickly revealed that Alice cheated on Vera, but they are trying to make it work despite the broken trust. So, they head to the woods for some hiking, some quiet, and a little bit on anthropological research on Vera’s part. Their cabin is owned by a Native American tribe and is located on sacred land. Nita (Mindy Van Kuren), the current owner, describes how the cabin has been in her family for centuries, despite a rather bloody history. As she gives them the grand tour, she warns them to never cross the property line, which is ominously marked with barbed wire. The Barham family, who lives on the other side of that property line, lay claim to any who wander onto their land.

Of course, they cross the property line, but just barely; Vera only touches it as she trips while sharing a kiss with her wife. But that doesn’t matter to the Barhams. They demand blood in the form of ritualistic sacrifice. While Alice and Vera are trying to decide what to do, Monster-chugging, cigarette-smoking, self-proclaimed camera-fucker Thatcher Vance (Jeremy Sande, Deepwater Horizon), who slept with Alice, appears at their door to claim what he believes is his. Nothing says romantic getaway like your wife’s ex-lover and a blood-thirsty cult banging down your door. It all spirals out of control as they try to escape, only to fall into the hands of the red-robed cult.

Hallowed Ground has a surprisingly nuanced portrayal of sexuality. Many B-horror movies like this would rely on lesbian relationships for gratuitous sex scenes that cater to the male gaze and refuse to look under the surface. However, Hallowed Ground focuses on the nuances of Alice and Vera’s relationship, treating them like any other heterosexual couple in a horror movie. Their sexuality is used against them by the homophobic, racist cult members, – yes – but it is not punished. Further, Alice discusses her bisexuality and the insecurity she feels around that identity, which is something almost never seen in film, period. She tells Vera that she doesn’t feel accepted in the lesbian community because of her attraction to men, despite being married to a woman. This is an insecurity that many of us who identify as bisexual feel, as we try to find a place in the queer community.

Unfortunately, this doesn’t necessarily extend to Vera. She explains her own struggles with coming out in the Bible Belt, but instead of creating sympathy, it falls into stereotype because it is never mentioned again. While Alice’s bisexuality comes in to play throughout the narrative, and she uses it as a tool of survival, Vera’s story merely feels like a sob story that is often ascribed to queer characters. This is not to say she is not a developed character, but tacking on that aspect of her background felt disingenuous to the work done throughout the film to achieve careful queer representation.

While Hallowed Ground’s queer representation is a breath of fresh air, its story feels stale. It drags on for far too long and dips too often into relationship melodrama rather than cult horror. Doleac wants to build up the stakes for Alice and Vera’s relationship, but this results in an overlong film with a payoff that doesn’t necessarily feel worth it. There are too many plot lines Doleac wishes to weave together, rather than just focusing on a couple being attacked by a cult in the woods. Sometimes, shorter is truly better.

On top of the story, Hallowed Ground swings and misses in regards to Native American representation. A blood feud between a racist family and Native American tribe could be a fascinating story, but when non-Native Americans are cast, and traditional iconography is used to create a stereotypical look at an unnamed tribe’s traditions, it becomes questionable.

Hallowed Ground starts strong with queer representation, falters with its use of Native American iconography, stumbles with an overlong story, but recovers with strong performances from its female leads. It is refreshing to see a lesbian couple at the center of a horror film that isn’t just used to cater to male sexual desire. Hallowed Ground is the perfect film to check out on a lazy Sunday, when you just want to lay on the couch and watch something without really having to turn on your brain.

Hallowed Ground will be released by Uncork’d Entertainment in limited theaters on June 7th, and VOD/DVD on June 11th. Let us know what you think of the film on Twitter, Instagram, Reddit, and in the Horror Fiends of Nightmare on Film Street Facebook group! 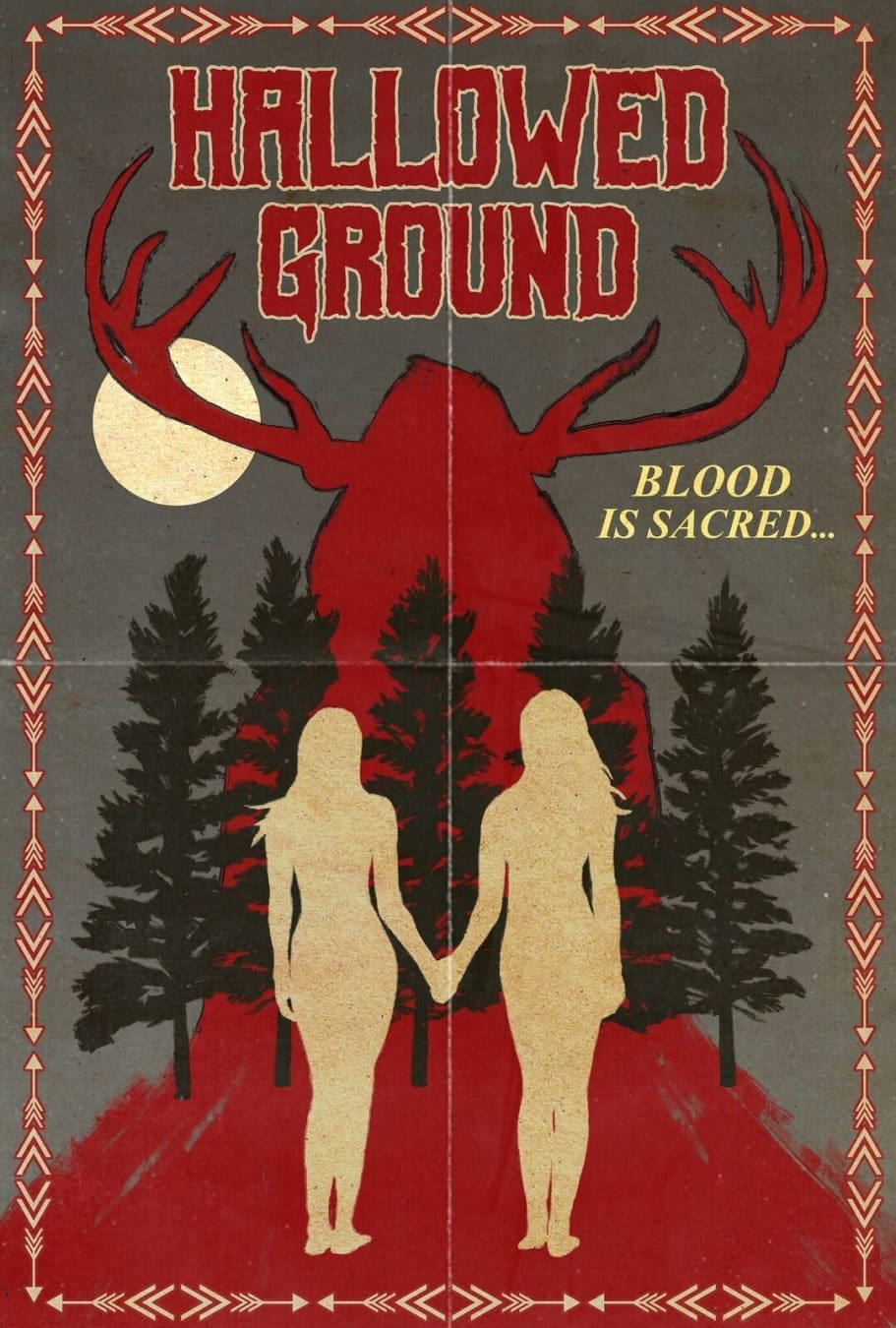 TLDR Hallowed Ground starts strong with queer representation, falters with its use of Native American iconography, stumbles with an overlong story, but recovers with strong performances from its female leads.