[Review] FEAR STREET PART 1: 1994 is A Spooky First Taste of the Trilogy

Many a 90s kid grew up on Fear Street. Well, the series of novels by R.L Stine, that is. It probably comes as no huge surprise that I count myself among those budding Fear Street residents, devouring book after book throughout my pre-adolescent summers. And now, as a 30 something-millennial just ripe enough for nostalgia, Netflix has supercharged Spooky Girl Summer with not one, but three Fear Street films, all debuting back-to-back in a three-week event.

The first installment, Fear Street Part 1: 1994, kicks off our trilogy of terrors in -you guessed it- 1994. Directed and co-written by Leigh Janiak (Honeymoon), with story credits from Phil Graziadei (Honeymoon) and Kyle Killen, audiences are re-introduced to the small, middle American city called Shadyside, the setting of many a terrifying tale if you grew up anywhere within a 100-mile radius of a Scholastic book fair.

After the slasheristic slayings at the Shadyside mall kill several residents and unmask one unlikely killer, there might just be something to the town’s urban legend of a resident witch out for revenge.

After that experience, Shadyside’s murderous past comes back to haunt the group, with a whole host of skeletons coming out of the closet – hellbent on killing Samantha. Desperate to protect her maybe not anymore ex-girlfriend, Deena enlists the help of her friends and online urban legend junkie little brother Josh (Benjamin Flores Jr.). The troupe traipse through Shadyside desperately trying to thwart the otherworldly killers hot on their trail and discover the truth of the town’s witchy history.

Though RL Stine’s series of novels were targeted towards younger teens, The Fear Street trilogy has another audience in mind; all three films are Rated R. (For reasons I can assume are because these teens delight in saying ‘fuck’ a lot, and also probably because the MPAA would never allow an underage human being groove un-chaperoned to Nine Inch Nail’s ‘Closer’.) Perhaps the decision to go full gore to distance themselves from the horror-lite Goosebumps film franchise kicked off in 2015 by the way-too-loveable-to-be-in-any-way-terrifying Jack Black as Stine himself.  Not unlike my teenage sister having to walk me to school those fateful Fear Street summers of my own, forcing me to walk at least 50 paces ahead of her lest anyone think we were walking *shudder* together.

Does it work? I don’t know. There are a few moments where I would shout ‘hell yes!’ with my gorehound fists in the air, but the Fear Street book series fan in me can’t help but feeling a little displaced by the lack of early adolescence suspended in idyllic animation. The Fear Street kids of the book series were concerned about ghosts, not being murdered by their babysitter, and kissing the boy down the street — not so concerned with Percocets, Vicodin, and wanking off in the boy’s bathroom. I like a good R-rated slasher as much as the next person, but I’d rather reserve my R’s for films that can unleash and be truly ruthless, not necessarily a film about a group of kids trying to defeat a witch Paranorman-style. 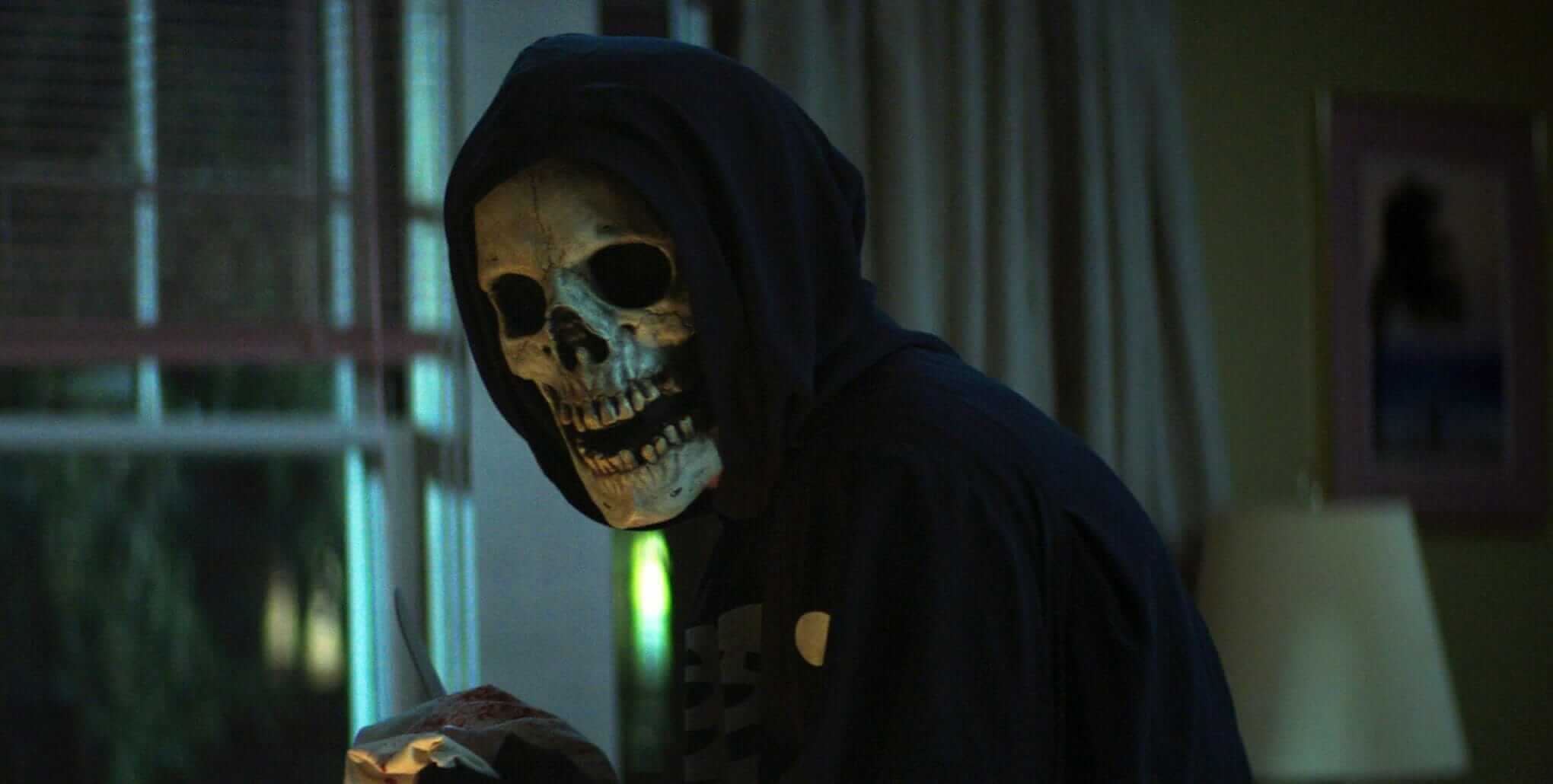 Something else that had me eager for Part 1 — the time period. Each installment of the Fear Street trilogy promises to transport us to a different era of Shadyside’s sordid history, and my millenial eye was eagerly spied on ’94. With AOL dial-up internet, pagers, and translucent telephones, Janiak has captured the tech of the era, but I’m hard-pressed to compliment much else. A few tubular slang words are dropped here and there, but the costuming didn’t scream 90s, a decade where the fashion was all neon greens, pinks, slap bracelets and scrunchies.

And too, the social concerns of the time. Our two leads are in an on-again-off-again homosexual relationship. Coming out as an adolescent is a difficult step during any era, but why let the 90s get off scot-free for being acceptance-central? There are zero social hurdles for the pair apart from one glare from a concerned mom- the two are accepted without hesitation from their peers. Maybe it’s because everyone’s more concerned about the masked killer chasing them through school corridors to be even a little bit homophobic, but again, if you’re going to shoot for an R, let’s give these characters more to deal with than just avoiding the sharp end of a blade.

Because Fear Street Part 1:1994 is part of a ready-made trilogy, audiences will be left with plenty of loose ends to tie. And uniquely, giving full credit to Netflix’s gluttonous release schedule, this works well. Part 1 isn’t fully satiating as a single piece, but there is plenty more in store – and I’ve been given a good taste of the world enough for them to turn it on its head and give it to me in a whole new decade. I say bring on Part 2!

Overall, Fear Street Part 1: 1994 is a fun little taste of Shadyside that left me eager for more. A little stumble on selling the setting, but there are two more terrifying time periods still left to try.

Fear Street Part 1: 1994 lands on Netflix July 2nd. The sequels will follow shortly after on the Friday’s following. Let us know if you’re a Fear Street fan in the Nightmare on Film Street Discord! TLDR Overall, Fear Street Part 1: 1994 is a fun little taste of Shadyside that left me eager for more. A little stumble on selling the setting, but there are two more terrifying time periods still left to try.