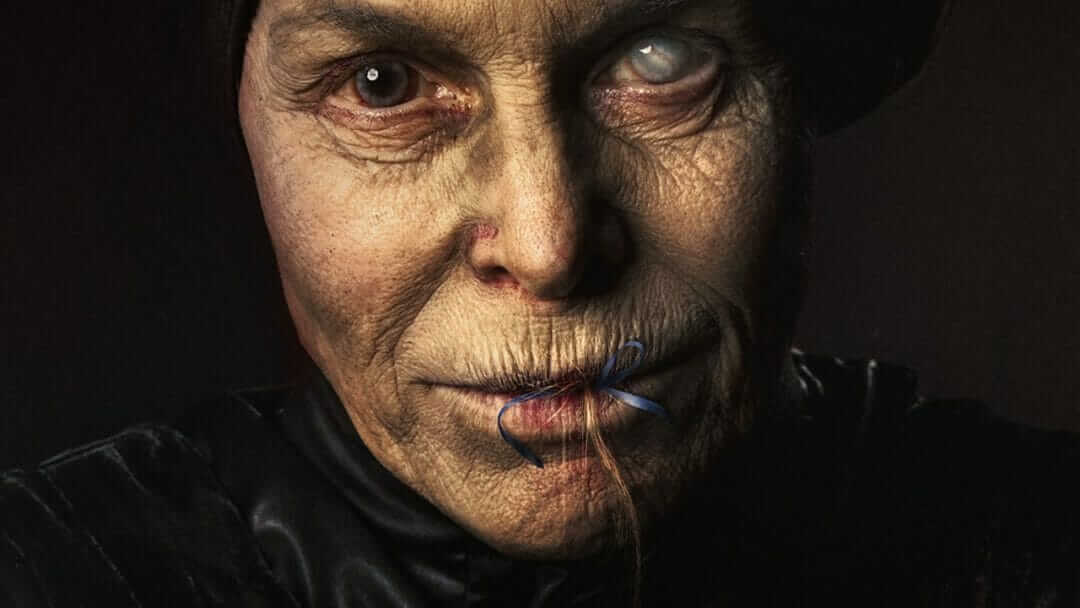 What comes to mind when you think of Hansel and Gretel? Is it crumbs of bread making a path through the forest? Is it a welcoming little house found deep within the woods? Is it two lost, plump children? Is it a hunchbacked old woman stirring a pot? Is it an oven?

The legend of the infamous siblings is one we’re born to understand. It’s a classic fairy tale, brought to us by the Brothers Grimm, told to condition our judgement and self control. The brother and sister’s dangerous journey into the home of a witch has all the necessary macabre components and serves as the framework for Osgood Perkins’ (The Blackcoat’s Daughter) eerily enchanting adaptation Gretel & Hansel, starring Sophia Lillis (IT), Alice Krige (Ghost Story), and Sammy Leakey (MotherFatherSon).

Perkins’ new twist on an old tale will make you realize you’ve been tricked into enjoying the saccharine nature of Hansel and Gretel this whole time. Starving in the woods may not be the worst-case scenario..

“Starving in the woods may not be the worst-case scenario..”

Cast out to fend for themselves, Gretel and her younger brother, Hansel, journey through the forest to find a place in civility. When their path begins to struggle and their adventure turns into a nightmare, they find refuge in the hidden home of a curious old woman. We all know how it goes from there, and to spoil some of the changes would be a shame.

Perkins and writer Rob Hayes (East Meets Barry West) make good to adjust the ending of Gretel & Hansel, but the majority of their story plays close to expectation. An appropriate origin story is given to one of the scariest figures in literature and the performances are beyond exception. Lillis, Krige, and Leakey truly fill this fable with a raw range of emotion and showmanship. What sets Gretel & Hansel in a league of praise rests mostly within the tasteful application of cinematic artistry. Empowering the audience to see and to think throughout the film is what makes this bedtime story revival a quality study in individuality. 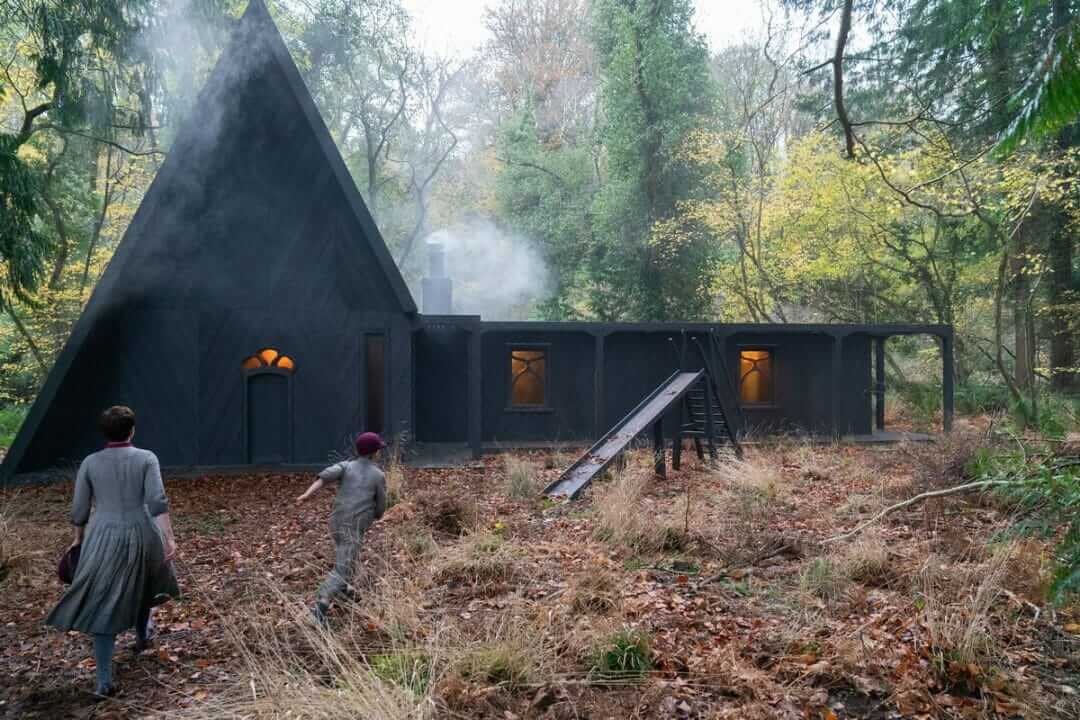 It Smells Of Cake, I’m Unable To Resist

Classic and simple storytelling is an irresistible treat when it comes to the horror genre. Adaptations, especially those of stories told time and again, can quickly turn into stale breadcrumbs. However, the writing of Hayes and the distinct direction of Perkins conjures up a relevant spin portrayed through new eyes and fresh hands. Gretel & Hansel follows the familiar tale close enough for comfort, but revives its age with slight contemporary flair through ROB’s eclectic synth scoring and prismatic viewpoints. The sound is gripping and ominous, speaking to the story’s tone. A few appropriate jumpscares hold engagement as the narrative slowly and quietly unfolds. Gretel & Hansel is a worthy retelling spiced with quality folklore elements and stylish presence.

It’s no secret that Perkins aimed to adapt the Grimm Brothers’ proverbial tale and the overall aesthetic of the film is exactly that: grim. Every frame is beautifully crafted in meticulous detail. The tone is dark and dreary, boasted by rich imagery. Clean but haunting, Gretel & Hansel delivers an earthy palette combined with some stunning CGI and visual effects. Primary colors are subtly utilized and play against natural shades of shadows and candlelight. Shots of the forest glow with atmospheric isolation and provide the ideal setting for the journey into the woods we all imagined as children. The gritty aesthetic adds a mature mood to this grown-up fairy tale. Overall, Gretel & Hansel is an attractive film that any viewer who salivates over a careful aesthetic will appreciate. Like a sweet slice of pie placed before a hungry stomach, it’s a very satisfying sight. Made From The Same Matter, The Same Filth

The fairy tale of Hansel and Gretel leans into valuable lessons warning of danger, temptation, and naivety. Gretel & Hansel does well to incorporate those overarching themes in the grand scheme of its story. However, this second sight uses its narrative to illustrate a more coming-of-age profile under Gretel’s agency. Her dominion as a capable individual is at constant odds with the tainted reality that she occupies. The relationships she shares with her brother and Holda, The Witch expand greatly from the childhood tale by touching on her role, responsibility, and rebellion as a maturing young woman. Though Gretel & Hansel is made on a strong foundation built around the Grimm Brothers’ story, the matter of the lessons is cut from a more elaborate cloth.

The variation in this retelling does not stretch far from a fairy tale, but it does possess a “power to be nurtured”. While Gretel’s autonomy takes center-stage, the film incorporates more mature themes like survival, hardship, and ‘fight versus flight’ into its content effectively. The essences of temptation, innocence, and rebellion are matured and modernized to fit today’s audience. Voiceover excerpts guide viewers through a path of encounters that continuously rack up tension and dread, ultimately leading up to an ending that keeps itself a secret no matter how familiar we think we are with the outcome. Gretel & Hansel is the same story that scared us as children. However, through a more adult lens, Perkins helps us see that there’s so much more to fear than a little old witch in the woods.

Chock full of delicious goodies to dissect and digest, one of the most fascinating parts of Gretel & Hansel is the symbolism. The narrative plays with the notion that stories cause us to see things that aren’t there, but Perkins displays his thematic representations very much out in the open. Styled in beautiful symmetrical frames and shots, the binary perspective of good versus evil is consistently pursued. The 1.55:1 aspect ratio serves each scene well as the mind is limited to what is shown by choice and attention is forced onto the interactions taking place.

There is a unique variety in the cinematography and points of view, elevating both the performances of Lillis, Krige, and Leakey and the nuances behind their behaviors. The application of basic numbers and shapes applies simple magnetism, a nod to period paganism. The power of three, in points, sides, and objects, is a lingering number that brilliantly flows throughout the story from the dialogue to the architecture. When the meaning is revealed at the end of the third act, it’s hard not to appreciate the deeper thought added to the classic fable.

Light and color representations create an intense expression and entice viewers to think more in order to know more. The presence, absence, and placement of light is significant to the power struggle between the characters, both against each other and against themselves. The color red, both crimson and primary, plays a tremendous part in allusion and plot movement, but it is never all-consuming or distracting.

“..there is so much to devour visually and mentally with little being detracted from the narrative or performances.”

“Nothing is given without something else being taken away” may be the rule of thumb in Gretel & Hansel, but there is so much to devour visually and mentally with little being detracted from the narrative or performances. Instead, each feeds itself. Between color, light, numbers, and shapes, the basic motifs in visual storytelling are covered. There is not an actual trail of breadcrumbs shown in Gretel & Hansel, but if you look hard enough, you just might find one.

With Gretel & Hansel, Osgood Perkins proceeds to craft his style with film passion and comprehension. The third act is coated in striking material with a handful of lovely surprises and depth. This clever battle of ability against vulnerability manipulates the Brothers Grimm anecdote to fit a knowledgeable audience. Everything from the feminist subject matter, to setup of Holda’s menu, is handled with terrific care. Perkins has taken an aged piece and transformed it into a hearty cinematic meal by channeling his artful methods and creative vision. Gretel & Hansel is proof that adaptations can come from the same origins and take different paths.

Have you seen Gretel & Hansel? What do you think of Osgood Perkins’ adaptation of the Grimm fairy tale? Let us know your thoughts over on Twitter, Reddit, or in the Horror Movie Fiend Club on Facebook! TLDR With Gretel & Hansel, Osgood Perkins proceeds to craft his style with film passion and comprehension. The third act is coated in striking material with a handful of lovely surprises and depth. This clever battle of ability against vulnerability manipulates the Brothers Grimm anecdote to fit a knowledgeable audience. Everything from the feminist subject matter, to setup of Holda’s menu, is handled with terrific care. Perkins has taken an aged piece and transformed it into a hearty cinematic meal by channeling his artful methods and creative vision. Gretel & Hansel is proof that adaptations can come from the same origins and take different paths.