More than 30 years ago, wholesome all-American families were clutching at their pearls in their suburban homes as they watched back-to-back news coverage of Satanic cults and heavy metal music inspiring acts of murder. Those reports were debunked years later, but the zeitgeist of that era provides the perfect backdrop to the delightfully devilish heavy metal horror We Summon The Darkness. Having been embraced by the genre community for his film My Friend Dahmer, director Marc Meyers continues his journey into the dark side of cinema, with a script written by Alan Trezza (Burying The Ex).

The year is 1988. The state of Indiana is on high alert after a string of murders, all seemingly related by satanic symbols left on the walls at the scene of the crimes. But that isn’t stopping Alexis (Alexandra Daddario, Texas Chainsaw 3D), Val (Maddie Hasson, Impulse) and Bev (Amy Forsyth, Channel Zero: No-End House) from road-tripping to a heavy metal concert. At the concert, they meet three former bandmates Ivan (Austin Swift, Live By Night), Mark (Keean Johnson, Alita: Battle Angel) and Kovacs (Logan Miller, Escape Room).

Looking to keep the party going after the show, the girls invite the three friends to Alexis’ family estate for more drinks. The three guys excitedly follow them to the secluded house, thinking the night will end with sex, but in a role reversal, their drinks are drugged. Ivan, Mark and Kovacs wake up tied up, in a room decorated in pentagrams and skulls, at the mercy Alexis, Val and Bev. But their murder plans are interrupted when an unexpected guest drops by the house, allowing their victims a small window of survival.

In the background of all this, a fire-and-brimstone televangelist Pastor John Henry Butler denounces the satanic murders on every TV screen. Pastor Butler is played by none other than Johnny Knoxville, which begs the question, how is it that notorious heathens are so good at portraying holy men (see: George Carlin as Cardinal Glick in Dogma)? Instead of bouncing off the walls like his previous Jackass-type roles, Knoxville is cold and calculated, and has probably the best line in the entire movie, declaring “I am the wrath of God”. I bet Knoxville agreed to be part of the film on that line alone. In fact, the entire cast appears to be loving their given roles; nothing is phoned in. Amy Forsyth also deserves a nod for her performance as the odd one out of the girl gang. While Alexis and Val flirtatiously flaunt their desirability and will use anything at their disposal to achieve their goal, Bev is more shy and hesitant. Her moral crisis becomes a fly in the ointment of the whole operation. The male characters are less complex (though Mark seems to have a sensitive side). Their goals are to get wasted, get laid and later on, get out alive. At times, you’re almost rooting for the fatal femmes.

My one complaint about this movie—and it’s very small—is the choice of music at the beginning. The band everyone travels to see is called Soldiers Of Satan, completely made up for the sake of the film. However, it was decided that “Black Funeral” by Mercyful Fate would play as the fictional band’s original song. This might not sound like a big deal to the average viewer, but as a metal fan, when you hear the distinct falsetto of King Diamond, you expect to see a man in black-and-white makeup and a cape, not a bunch of long-haired dudes. I feel any other satanic heavy metal song from the late ‘80s would have been more appropriate since there’s so many to choose from. Or better yet, they could have written their own Satan-themed song for the minute-long concert scene instead of paying for the rights of an existing song.

“During America’s Satanic Panic […] Heavy metal and the occult were merely a distraction from the true evil of human nature.We don’t need to summon the darkness. The darkness is already here.”

Besides this minor detail, I thought the portrayal of metalheads was pretty accurate. When the girls meet the three guys in the parking lot of the concert, they drink beer, smoke pot and brag about their first concerts. It reminded me of the 1986 short documentary Heavy Metal Parking Lot, shot in the parking lot of a Judas Priest concert. The costumes consist of ripped shirts, black leather jackets and patched up jean jackets, though Daddario tops off her look with upside-down cross earrings and necklace. However, heavy metal is only the catalyst for the coming bloodbath. Metallica ain’t gonna save these boys from being butchered.

Probably the best use of music is when Alexis plays a tape of Belinda Carlisle’s “Heaven Is A Place On Earth” at full volume—a song often used to highlight a romance in a cheesy ‘80s movie, but in this context, hearing it reverberate throughout the mansion as the guests are being hunted down gives it an ironic and threatening air. The song climaxes with a struggle over a kitchen knife and ends with a gunshot. 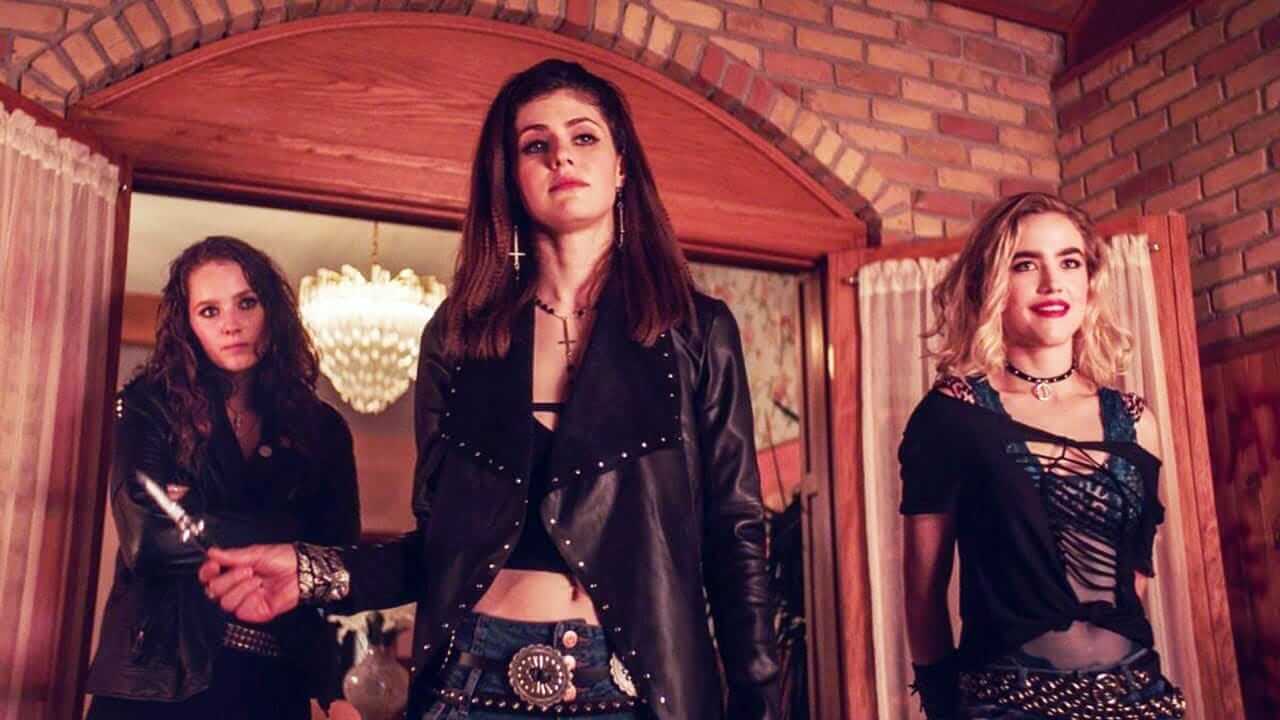 Officially, this is Meyers’ first attempt at a horror/thriller. For the most part, it’s a success; it doesn’t rely on common pitfalls like jump scares and overt ‘80s nostalgia. Even with all the danger, it remains incredibly entertaining, and it’ll keep you on the edge of your couch. Like My Friend Dahmer, Meyers soaks the film in eeriness, building the tension. The only difference is that it actually pays off in a big bloody way.

During America’s Satanic Panic, hysteria was drummed up by bible-thumpers and the media, as evidenced in the movie by radio and TV reports and the front pages of newspapers. The finger was frequently pointed at goth kids, metalheads and outcasts, who were locked up for crimes they didn’t commit on very little evidence, while the real killers were never caught. Once the dust settled, the accusations were revealed to be fabricated or misguided. Heavy metal and the occult were merely a distraction from the true evil of human nature. We don’t need to summon the darkness. The darkness is already here.

I’ve used this term before for a Satan-themed movie, and I hope to use it in the future with the release of more heavy metal horror: two horns way up! We Summon The Darkness will be available on VOD on April 10th. Let us know what you thought of the film, and share your heavy metal concert stories with us over on Twitter, in the Nightmare on Film Street Subreddit, and in the Horror Movie Fiend Club on Facebook! TLDR Officially, this is Meyers’ first attempt at a horror/thriller. For the most part, it’s a success; it doesn’t rely on common pitfalls like jump scares and overt ‘80s nostalgia. Even with all the danger, it remains incredibly entertaining, and it’ll keep you on the edge of your couch. Like My Friend Dahmer, Meyers soaks the film in eeriness, building the tension. The only difference is that it actually pays off in a big bloody way. I’ve used this term before for a Satan-themed movie, and I hope to use it in the future with the release of more heavy metal horror: two horns way up!