Children’s entertainment like toys and movies quickly fall out of fashion, but imaginary friends are forever. Jacob Chase underlines this fact in Come Play, a film adaptation of his short Larry. In the movie, a boy’s imaginary friend turns out to be both very real and scary for one family.

Sarah (Gillian Jacobs) and Marty (John Gallagher Jr.) are struggling to make ends meet while raising their young and non-verbal autistic son Oliver (Azhy Robertson). The boy’s loneliness eventually attracts the attention of a gangling and horrific-looking creature, Larry, who manifests through electronic devices like Oliver‘s phone and tablet. The monster doesn’t necessarily want to hurt the child, but if anyone stands in the way of his and Oliver‘s budding friendship, then there’s no telling what Larry is capable of. 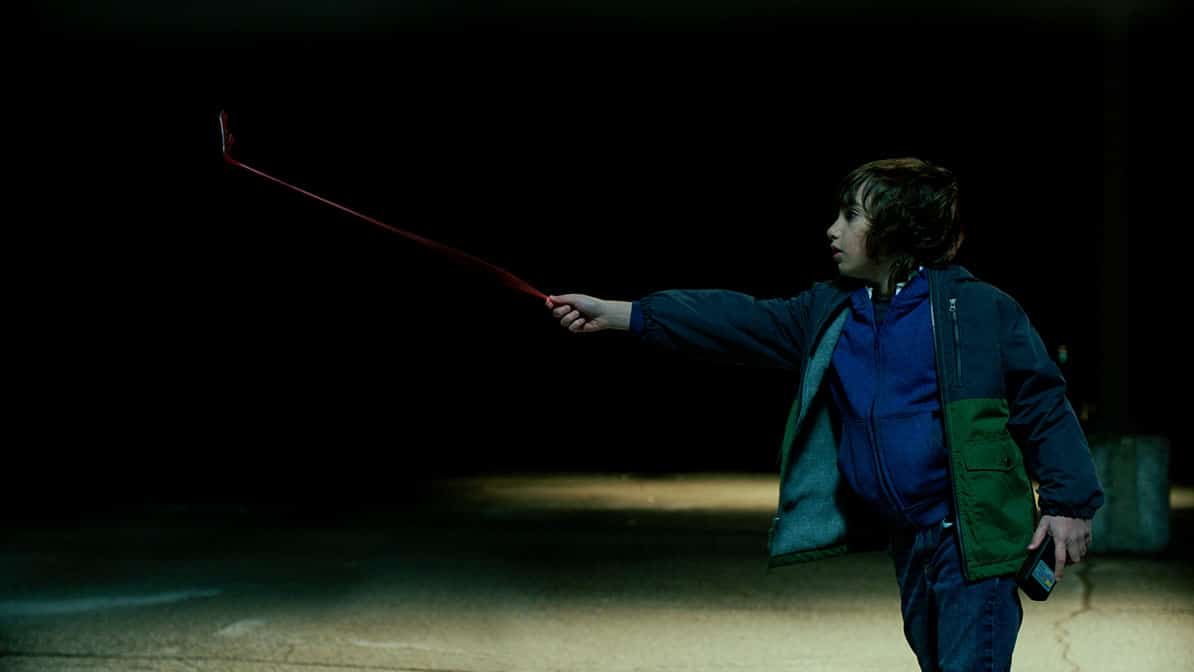 Unlike the short, the focus of the story isn’t a man who incidentally summons a monster after reading a spooky children’s story aloud on a tablet he found at work. The character is in the movie, but now he’s a father and husband. Although he’s given some dimension — he takes on more hours at his job of being a parking lot attendant to avoid taking care of his son, and his wife accuses him of always being the hero who swoops in at her expense — it’s Jacob and Robertson’s characters who are allotted the more substantial spotlight. That’s not to say the director doesn’t give Gallagher’s role some attention; he recreates the very same scene from the short, now with more punctuation and threat.

The recurring argument about PG-13 movies being too sanitary for modern fright fiends will undoubtedly come up when considering seeing a film like Come Play. Since creature carnage is not the movie’s objective and this new Larry isn’t conceived as a wanton killer, the confrontations between the characters and the monster are all rather tame. They’re bloodless and verge on being overly staged only because Chase isn’t seeking a body count. Having said that, given Larry‘s clearly stated M.O. about protecting those he attaches to, his scare tactics are silly and frivolous. It’s just more padding in a movie that’s already running a bit too long for its own premise.

The sentimentality throughout Come Play will touch some viewers’ hearts, but for others, it’ll feel like crafty déjà vu. What appears to be a simple monster movie is really a personal essay that will especially appeal to parents; Larry is a means to an end rather than just a destructive force with no design. Fans of the difficult mother-son relationship in The Babadook will surely appreciate that aspect of the story. The delivery system, however, is flawed — a string of scenes that illustrate the parents’ hardships is more like a worst-of list in a family’s life rather than a fair portrait. While it’s all for the sake of preparing us for an ending aimed to tug at heartstrings and hit close to home for parents in a comparable situation, it also feels all too calculating.

The trend of translating potent horror shorts into feature-length movies has yielded mixed results over the years — Mama and Light Outs each did quite well at the box office, but neither were critical darlings, nor did they break new ground in the genre. Chase’s debut plays in the same sandbox and suffers from similar problems as the abovementioned movies. Larry‘s mystery and efficacy left an impression on viewers, whereas Come Play does less in spite of having a much longer runtime. To fill out the story, Chase relies on excessive exposition and been-there-done-that plot developments before delivering a limp conclusion. 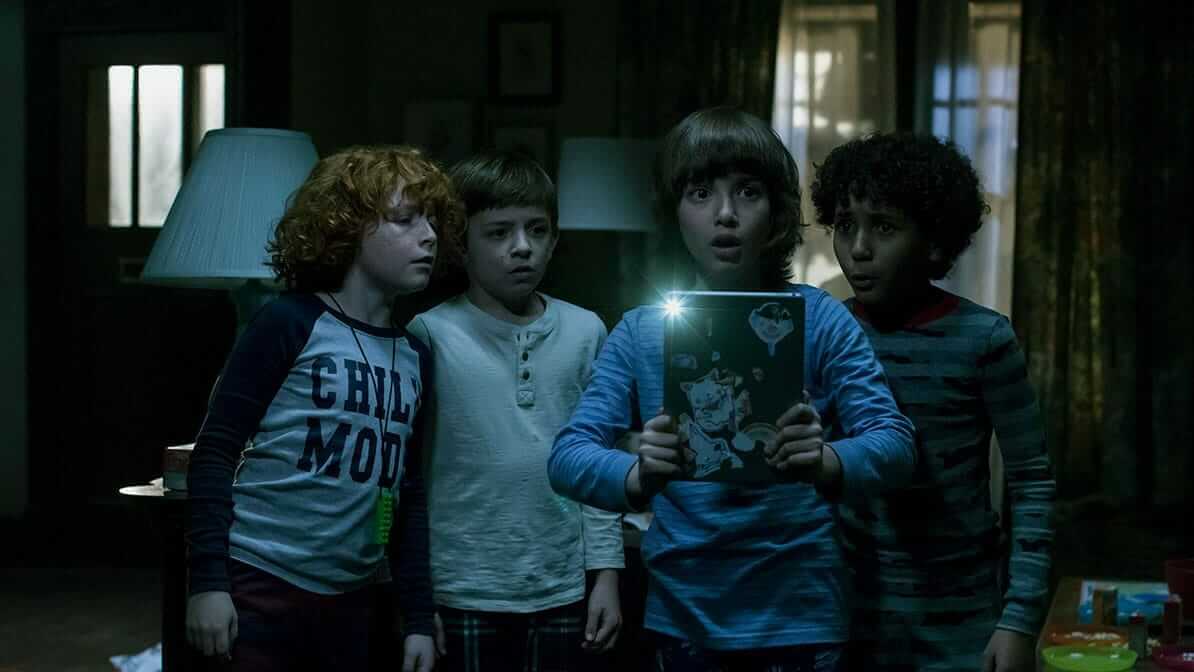 Seeing as the movie is all about the ups and downs of family life, Come Play is made with parents and children in mind. It’s not exactly a fangless gateway horror, though, since a few sequences boast imagery far too intense for the younger crowd. As for adults, they’ll either be affected by this gift-wrapped parental tale of worst fears come true, or they’ll think of other movies with analogous themes, more zeal, and better execution. Chase’s expansion of his short isn’t without its merits — moody cinematography, agreeable performances, an adequate amount of monster-related set pieces — but it doesn’t give audiences too much to play with, either.

Come Play opens in theaters on October 30. Share your thoughts on this movie with the Nightmare on Film Street community on Twitter, in our Official Subreddit, or in the Fiend Club Facebook Group! 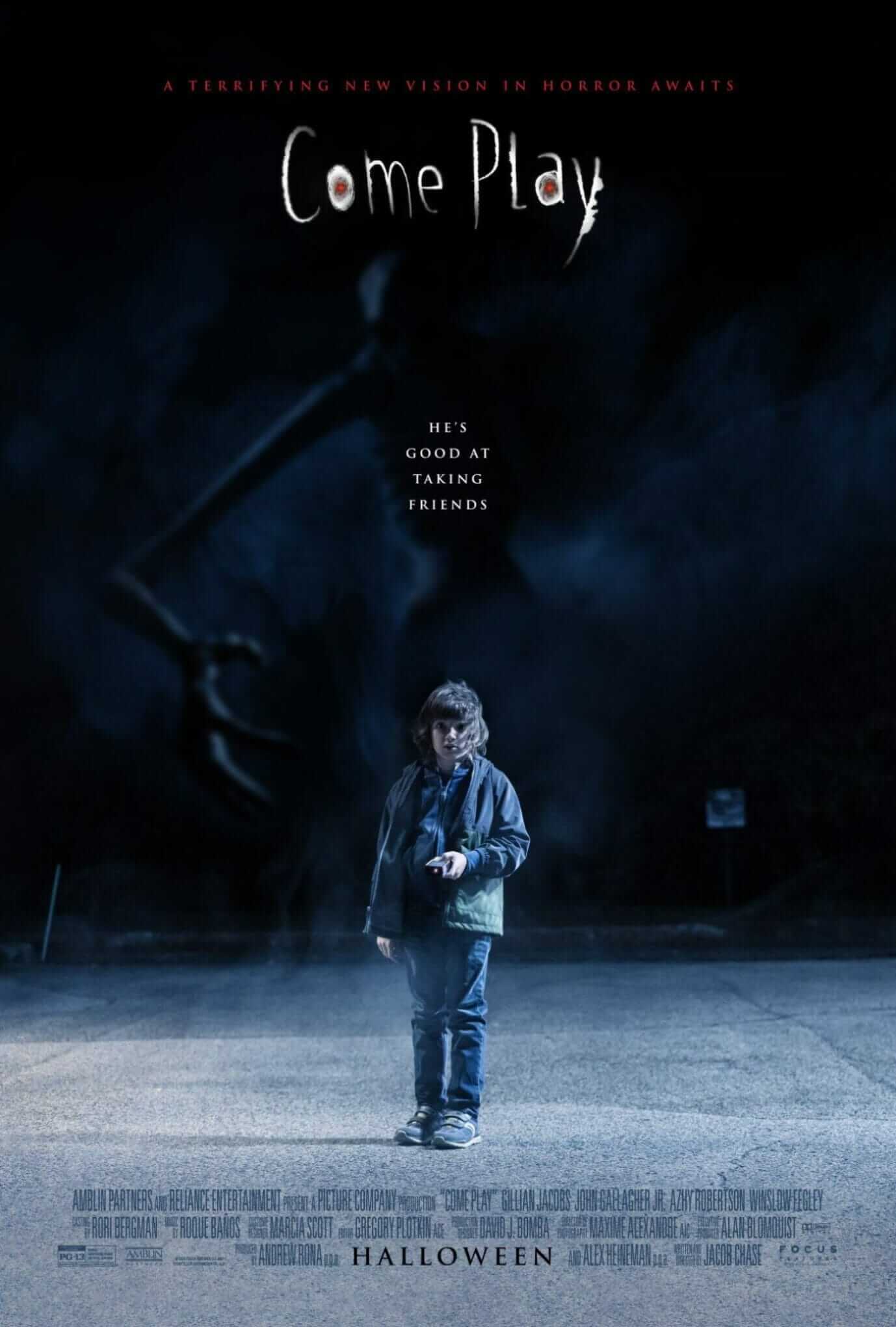 TLDR The sentimentality throughout Come Play will touch some viewers' hearts, but for others, it'll feel like crafty déjà vu. To fill out the story, the director relies on excessive exposition and been-there done-that plot developments before delivering a limp conclusion. Isn't without its merits — moody cinematography, agreeable performances, an adequate amount of monster-related set pieces — but it doesn't give audiences too much to play with, either.