Between heirlooms and physical traits, we inherit a lot of things from our parents; not every one of those things is necessarily good, either. In some cases, succession can even seem like the Devil’s work. Based on the novel of the same name by author Donald Ray Pollock, The Devil All the Time is a meticulous coming-of-age thriller with paralleling but vital subplots. The film takes a harsh and bumpy scenic route when it comes to explaining why the film’s destined protagonist does exactly what he does. To better understand our would-be hero, we first have to chew over his troubling origin story and assimilate the culture that shaped him.

For teenage Arvin Russell (Tom Holland), his uncertain future begins with what he considered the best day “he ever spent with his father.” And years before his own birth or that momentous day, Arvin‘s life is prefaced with his father Willard (Bill Skarsgård) returning to Ohio after serving time in the Pacific War, then moving to rural Knockemstiff with his new and expectant wife Charlotte (Haley Bennett). The Russell patriarch, who has since found God again as he deals with an unspoken case of PTSD, turns his born-again outlook into a makeshift place of worship in the woods. He often strong-arms young Arvin into joining him as they pray for long periods to a crude-looking crucifix that represents Him. Yet when the unexpected happens to his family, Willard‘s zealous mania takes over. 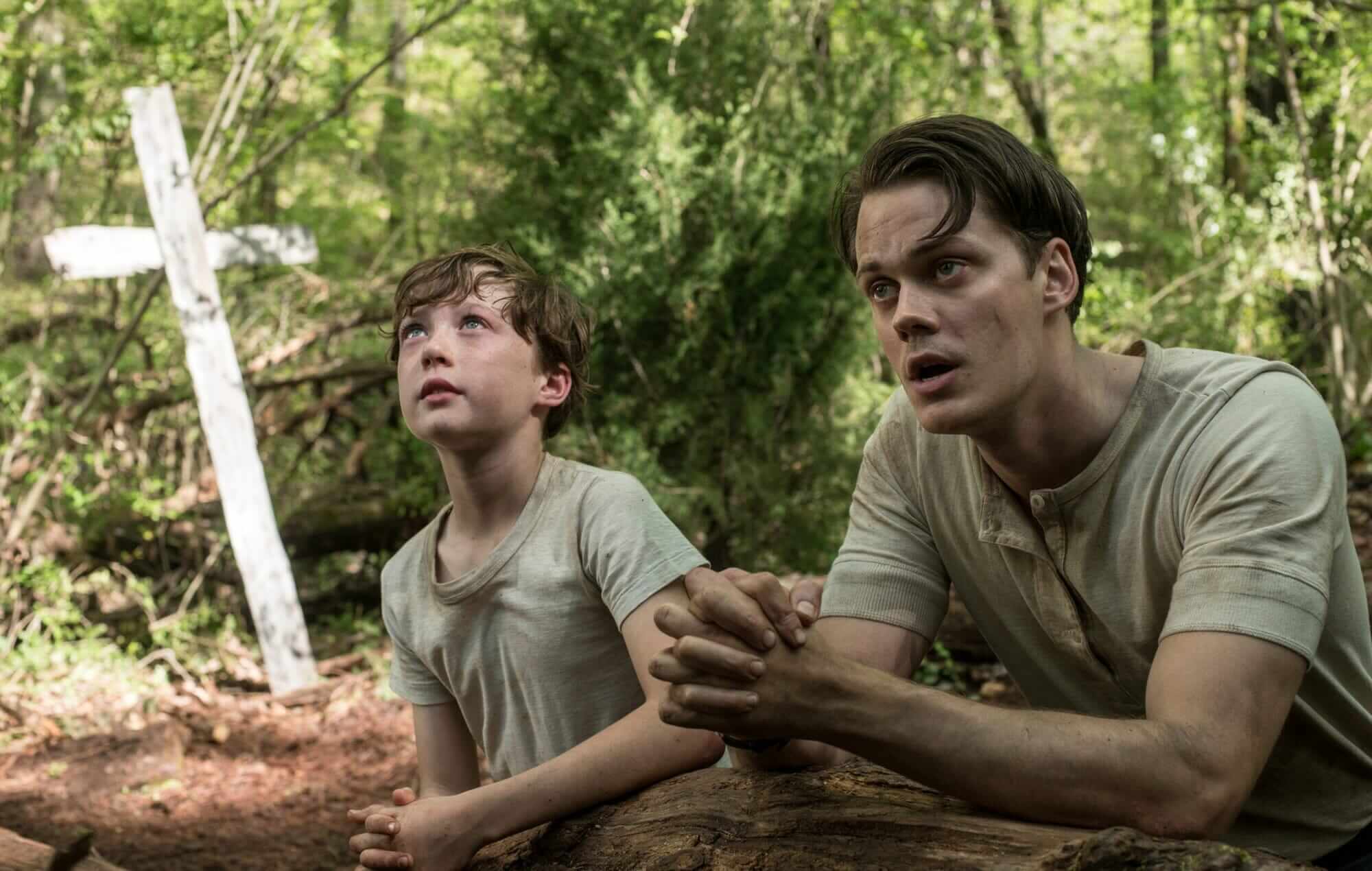 Arvin soon moves in with his grandparents and his new stepsister Lenora (Eliza Scanlen), whose own parents have perished under equally unfortunate circumstances. The two grow up on different ends of the spectrum in regards to faith, but their love is unconditional and everlasting. On account of the area and time period, religion understandably plays a significant part in the film. Arvin becomes more adverse to the idea because of his past with it, whereas Lenora is preyed upon by classmates and a twisted preacher (Robert Pattinson) because of her devoutness. These acts spur Arvin to act on his father’s ominous words of advice: “You just got to pick the right time.”

In the meantime, we meet other characters whose roles in relation to Arvin are unclear until later on. This includes a disturbed couple (Riley Keough and Jason Clarke) whose M.O. is not unlike that of the infamous Lonely Hearts Killers, and a bungling and crooked sheriff (Sebastian Stan) whose early run-in with Arvin won’t be his last. Their presumed purpose is to address a gray area and create conversation regarding ethical designations. Are Arvin‘s equally heinous actions justified, or are they all two sides of the same coin? This plain juxtaposition creates an unfair disadvantage seeing as Holland’s anti-heroism feels warranted and worth celebrating even if he’s still taking the law into his own hands. That being said, Antonio Campos’ adaptation knows well what side to fall on when arguing the moral semantics. 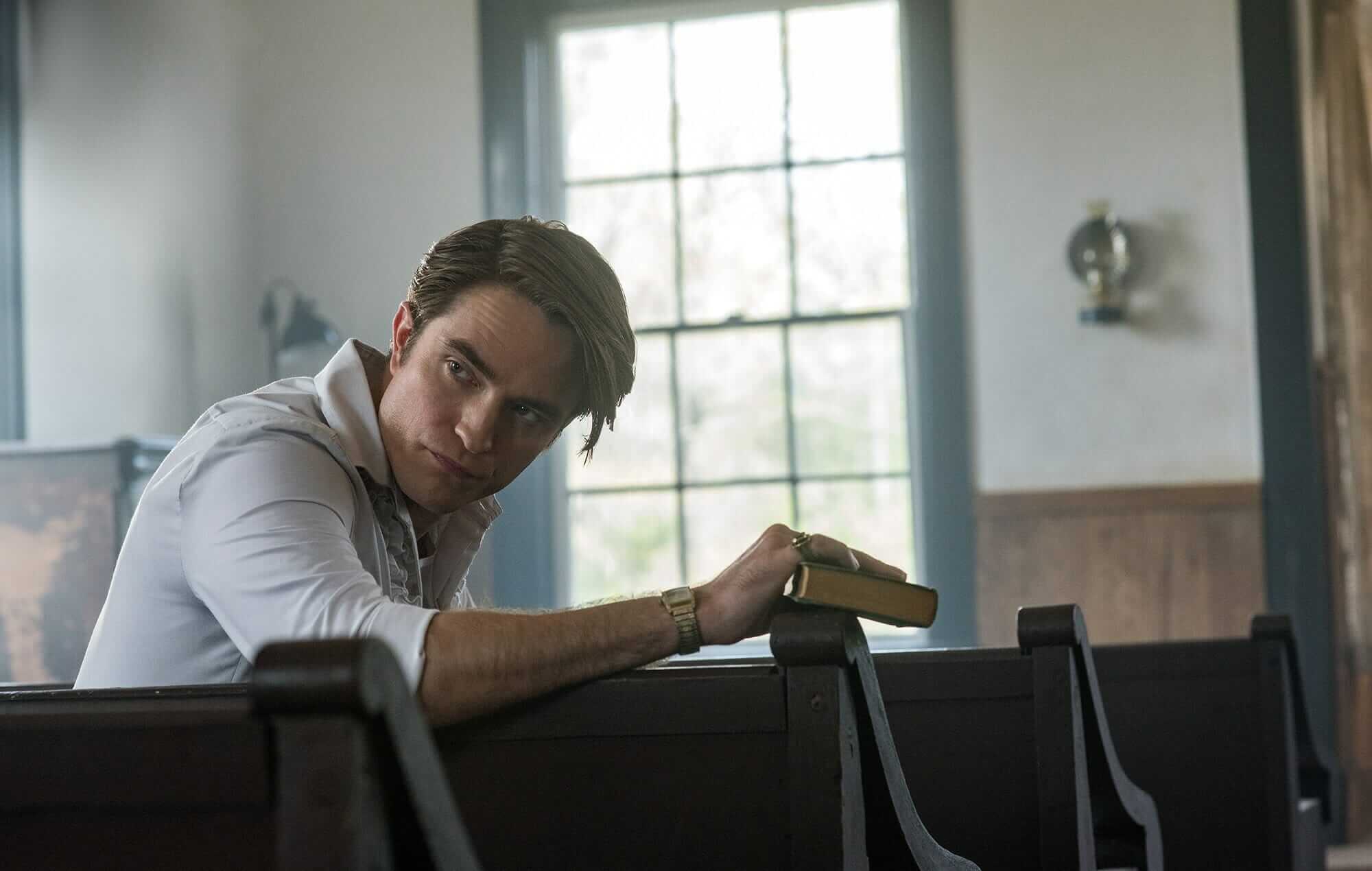 The ensemble of actors is potent and committed. They’re a buffet of pretend dialects and drawls, but each performance is as unwavering as it is neat. Tom Holland’s approach to consuming, and unseemly, vigilantism is a welcome contrast to all the sanitary roles he’s better known for. Someone like Arvin defers sadness and withholds rationale until he can no longer contain either anymore. The supporting actors of The Devil All the Time keep a machine built on corruption and violence well oiled and running. Keough and Pattinson once again prove they are genre chameleons who can change their colors at the drop of a dime. Scanlen, whose gentleness can pierce even the most hardened of hearts, earns every ounce of your sympathy with her mournful depiction of Lenora.

The runtime of this beautifully rural thriller shouldn’t daunt anyone who likes their stories with a little more meat on their bones. We are privy to a young man’s incorrigible pathos, and we come out the other side with more compassion than not. Like so many other tales of lifelong vengeance decorated with undue violence, Arvin‘s contentious journey won’t sit easy in a world full of black-and-white logic.

“…a buffet of pretend dialects and drawls, but each performance is as unwavering as it is neat […] The supporting actors of The Devil All the Time keep a machine built on corruption and violence well oiled and running.”

The Devil All the Time is now streaming on Netflix and is playing in select theaters. Share your thoughts on this movie with the Nightmare on Film Street community on Twitter, in our Official Subreddit, or in the Fiend Club Facebook Group! TLDR The Devil All the Time is a meticulous coming-of-age thriller with paralleling but vital subplots. The film takes a harsh and bumpy scenic route when it comes to explaining why the film's destined protagonist does exactly what he does. The runtime of this beautifully rural thriller shouldn't daunt anyone who likes their stories with a little more meat on their bones. The ensemble of actors is potent and committed. They're a buffet of pretend dialects and drawls, but each performance is as unwavering as it is neat. Like so many other tales of lifelong vengeance decorated with undue violence, Arvin's contentious journey won't sit easy in a world full of black-and-white logic.