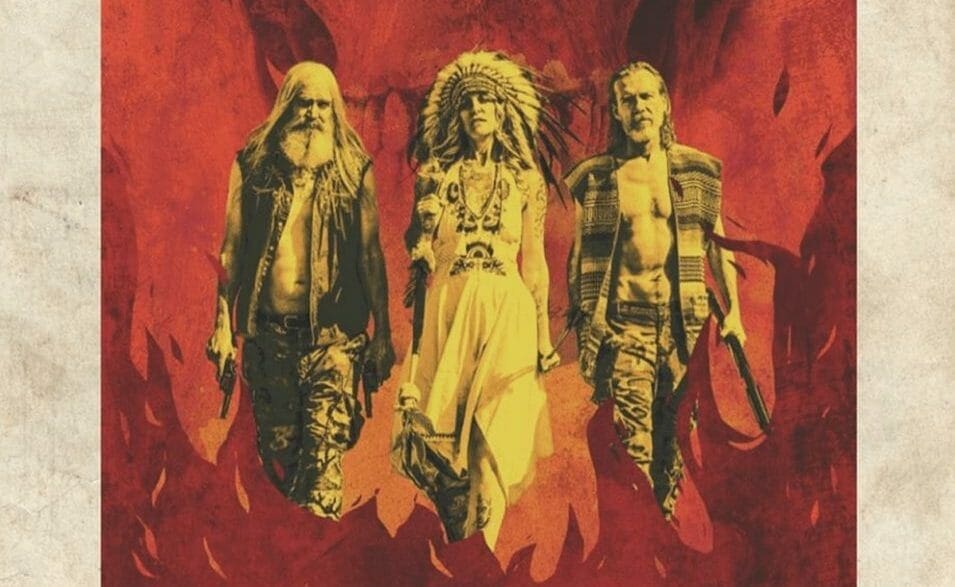 Rob Zombie’s Firefly Family is back! 3 From Hell, the followup to 2010’s The Devil’s Rejects is in select theatres now, and has already become another divisive film in the director’s catalog of contention. Without burying the lead, I’m just going to come right out and say: I really liked this movie, and I hope you do to.

3 From Hell chronicles the Firefly Family‘s capture, their highly publicized conviction, and ensuing carnage when they cut-and-run death row. 3 From Hell also introduces half-brother Winslow Foxworth Coltrane (a.k.a. “The Midnight Wolfman“) played by Richard Brake (31) who’s sadistic smile has cemented him as a Rob Zombie regular. With the help of Winslow The Three are free and on the run again! They run amok and strike fear into the heart of America, but will there ever be peace for these psychopaths or will they simply wander the earth as devils, bouncing from massacre to massacre? Can any place be called home again after their safe-haven was burned to the ground, (rightfully) cursed to live as rejects of society?

“3 From Hell is the unnatural evolution of The Firefly Family, crystallizing these psychos as the stuff of American Legend.”

The trio give zero f*cks for human life and it’s well on display in The Three‘s brutal exploits. Otis, our Manson of Ceremonies, is maybe a little sillier than we’re used to but that doesn’t stop him from carving up faces and killing innocent victims in front of their loved ones. His character always puffed his chest out at the biggest, baddest sombitch in the room (See: Sid Haig) but there’s a laid back familiarity with Winslow that make the two feel like old pals busting each other’s chops. It’s a little weird, but in a way they’re equals and their humor is matched by a sadistic lack of emotions. The Midnight Wolfman especially was a character I expected to roll my eyes into oblivion over but sat shook in my seat when traits played for yuks were brought back and weaponized for a moment that was colder than the sub-zero air conditioning punishing my body.

I’m sure by now you’ve gathered that the absence of Captain Spaulding in trailers and promos is not just for dramatic effect. We all scratched our heads a little bit when the words 3 FROM HELL appeared above a Bill Moseley, a Sheri Moon Zombie, and a Not Sid Haig but it was always unfair of us to assume that the legendary cult actor would remain a young man forever. His career has is monumental to the Grindhouse crowd and I’m sure if he were able, Haig would have been on set every gattdamn day. Which is really sad, because moments in the film (specifically the introduction of a bargain basement party clown) seemed tailor made for Spaulding but now, read more as a f*ck you! to your expectations for the film and the silent, but bubbling, gripes you have about his absence.

3 From Hell is the unnatural evolution of The Firefly Family, crystallizing these psychos as the stuff of American Legend. The world of the film sees them as modern folklore. It would have been just as believable (and suitable) if they escaped prison by lassoing a tornado! And that evolution also exists in the story itself. The movie begins a Women in Prison film before shedding it’s shackles and becoming Helter Skelter-sploitation (surprise, surprise Mr. Zombie sir) at which point it crosses the border and becomes Butch Cassidy and The Sundance Killers…and I’m kind of all about that. I don’t know if it was because I drove 1600 miles from Toronto to Texas, or because I saw it on a double bill with The Devil’s Rejects, or because I just happened to watch The Texas Chainsaw Massacre while eating breakfast that morning, but I could not help but love the madness of this movie.

Here’s the thing; We were all blown away by The Devil’s Rejects because it was so unlike House of 1000 Corpses. So why should we expect Zombie to do anything but break away and make something unlike The Devil’s Rejects with 3 From Hell? Fans were outraged when Tobe Hooper’s Texas Chainsaw Massacre 2 was released and here we are now celebrating the crowd-defying genius of a filmmaker that refused to pander to his audience. Though the movie borrows elements from the two films that preceded it, you will not find what you are looking for in 3 From Hell if you go in expecting The Devil’s Rejects.

“…you will not find what you are looking for in 3 From Hell if you go in expecting The Devil’s Rejects.”

I’ll level with you though- the criticisms you are hearing about this movie are mostly true. It’s an ugly film. It’s brutal from start to finish, and if you came looking for a closing-of-the-book on the Firefly Family story, you will not find it here. There are very few moments, if any, where you are cheering for these people to succeed. The Firefly Family does not deserve a happy ending and, unearned or not, that Tall Tale status does seem to give them a superhero level of mortality. The story arc ended before this movie began, and that’s a bummer because 3 From Hell does little to add to their overarching story but the film tries to tell you as often as it can to leave the past in the past, focus on the now, and accept what is in front of you as another blood-soaked entry in the saga of the Firefly Family.

3 From Hell is in select theatres now and will be available on blu-ray and dvd October 14, 2019. If you had a chance to see the new Rob Zombie film in the limited release, let us know what you thought on Twitter, in the Nightmare on Film Street Subreddit, and on Facebook in the Horror Movie Fiend Club! 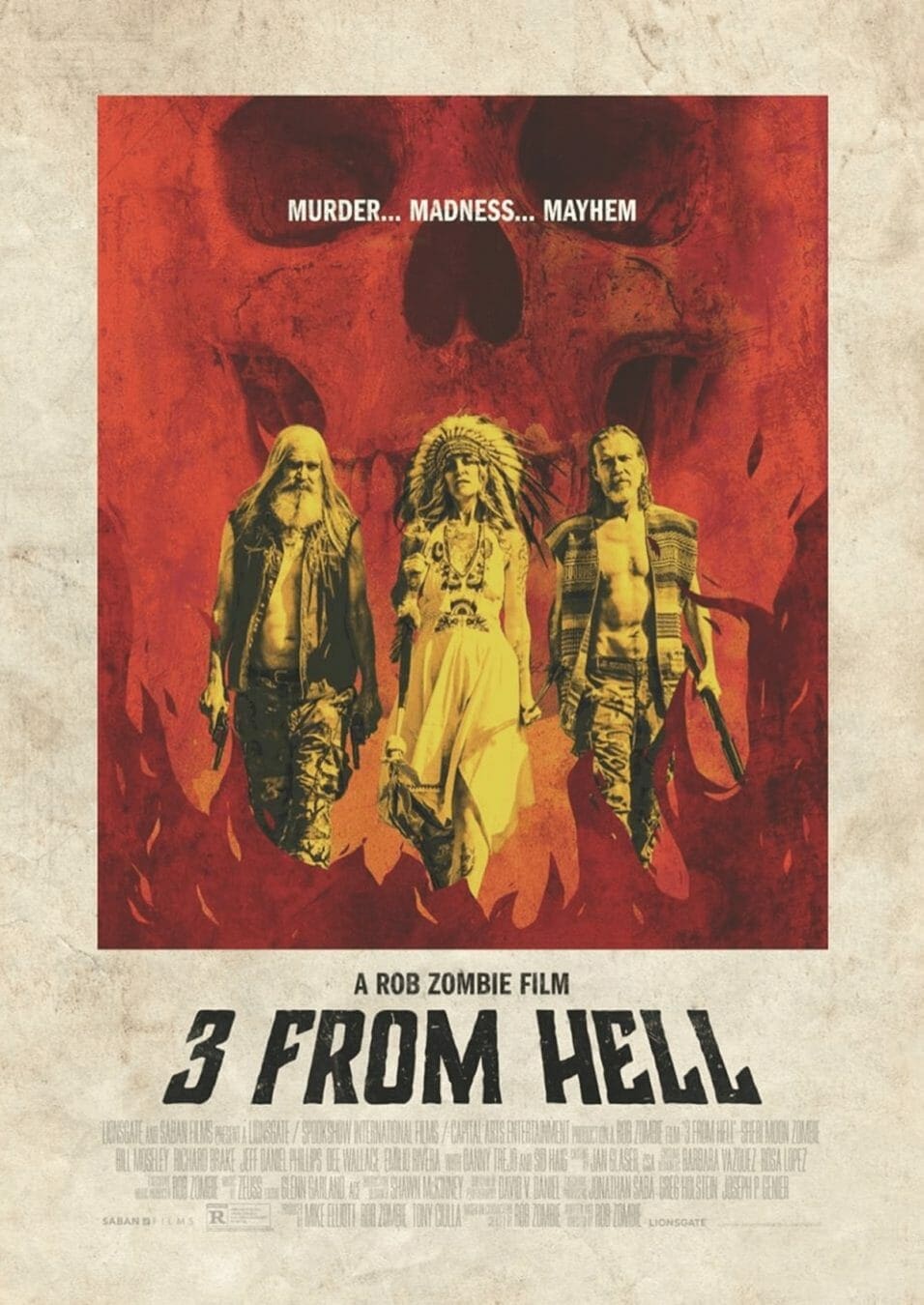 TLDR 3 FROM HELL is the unnatural evolution of The Firefly Family, crystallizing these psychos as the stuff of American Legend. Though the movie borrows elements from the two films that preceded it, you will not find what you are looking for in 3 FROM HELL if you go in looking for THE DEVIL'S REJECTS. The story arc ended before this movie began, and that's a bummer because 3 FROM HELL does little to add to their overarching story but the film tries to tell you as often as it can to leave the past in the past, focus on the now, and accept what is in front of you as another blood-soaked entry in the saga of the Firefly Family.