In this contemporary adaptation of Richard Donnell’s The Most Dangerous Game, a group of strangers are hunted as part of a twisted conspiracy. However, the tables are turned when one of the contestants fights back. With each fallen hunter, the prey eventually learns why she and everyone else were selected for The Hunt.

We cannot discuss a movie like The Hunt without getting into its politics. The film aggressively mirrors our world today as well as illustrates pressing social issues. Last year, Craig Zobel’s movie was indefinitely shelved after the plot — “deplorables” are methodically killed for fun — was criticized in the wake of real-life tragedy and outcry. Once the fuss died down, Blumhouse gave the film a new release date the following year. On top of that, the studio used the scandal as part of its promotion. Now, with hunting season resumed, was the controversy justified? Everything about The Hunt is hostile. From the on-screen violence to the loaded dialogue, the movie is unfriendly. If someone’s not being maimed or shot at, they’re at risk of suffering a deep-cutting, sanctimonious barb. There is no subtext in the movie. The writing has about the same amount of subtlety as a falling cinder block. The film’s entire ideology is laid out on the table with not even the bare minimum of nuance. Immediately, this kind of excess is a dead giveaway about whether or not the movie is satire.

“From the on-screen violence to the loaded dialogue, the movie is unfriendly.”

Do the satirical elements work, though? On paper, it sounds as if The Hunt would be an overwhelmingly biased argument, and that’s why it fell into hot water last year. After actually watching the movie, it’s pretty clear the filmmakers are having a go, albeit an unequal one, at both sides. There are certainly enough caricatures going into the movie. This provides more evidence as to why this is a complete send-up of our political climate. The more pointed dialogue in between all the fisticuffs will induce a squint or two (“Climate change is real!”), but it’s all said wittily enough to avoid total red face. 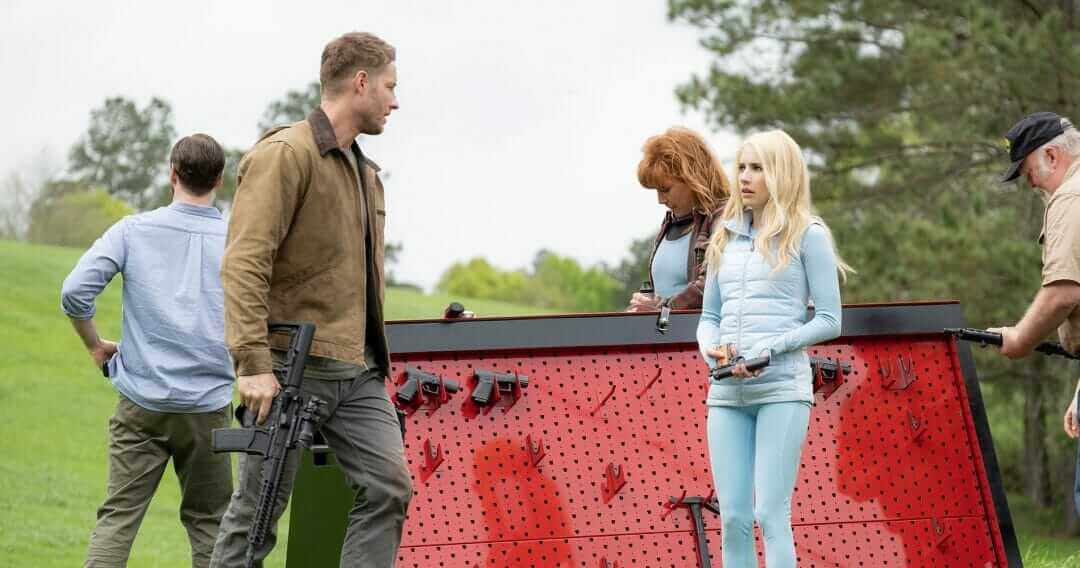 Looking past the film’s politics, The Hunt is an agile actioner right out the gate. The movie is firing on all cylinders when it comes to overly choreographed, hand-to-hand combat. Fans of You’re Next will experience déjà vu as they witness all this survivalist mayhem. Also, dwindling the cast down to next to nothing is a bold move. There are characters you would expect to last longer, but Nick Cuse and Damon Lindelof’s script is ruthless. Hilary Swank put it best when her character references Animal Farm: “No sentimentality, comrade; war is war.”

Speaking of, Swank’s villainous Athena is given a run for her money by the antihero, Crystal, played by the captivating Betty Gilpin (The Grudge). When these two come to blows, it’s a crowd-pleasing brawl that balances comedy (“No more glass!”) and physical prowess. Hats off to not only the actors but anyone who had a hand in the film’s bracing stunt work. While the final battle will be accused of being drawn out, the tussle, at the very least, looks good. When everything is ultimately said and done, The Hunt is a movie at odds with itself. It wants to shed light on urgent social matters the writers think are worth discussing. Yet, bizarrely, the political slant here doesn’t go the way anyone was expecting. It instead mocks the progressives by showing them their own reflections without addressing the other half of the debate. It’s a mixed message that will surely leave audiences scratching their heads.

“It’s difficult to say if this one will age well down the line, but it’s a potent sample of the time we are living in right now.”

After everything, The Hunt is an awkward satire saved by hard-hitting action that will please those looking for that kind of stimuli. It’s impossible to be objective about the movie’s politics when the story’s backroom has no walls or a door. In spite of that, this battle royal boasts handy humor and engrossing performances from its leads. It’s difficult to say if this one will age well down the line, but it’s a potent sample of the time we are living in right now.

Blumhouse’s The Hunt is now playing in theaters. Share your thoughts on the movie with the Nightmare on Film Street community on Twitter, in our Official Subreddit, or in the Fiend Club Facebook Group!

TLDR The Hunt is an awkward satire saved by hard-hitting action that will please those looking for that kind of stimuli. This battle royal boasts handy humor and engrossing performances from its leads. It's difficult to say if this one will age well down the line, but it's a potent sample of the time we are living in right now.