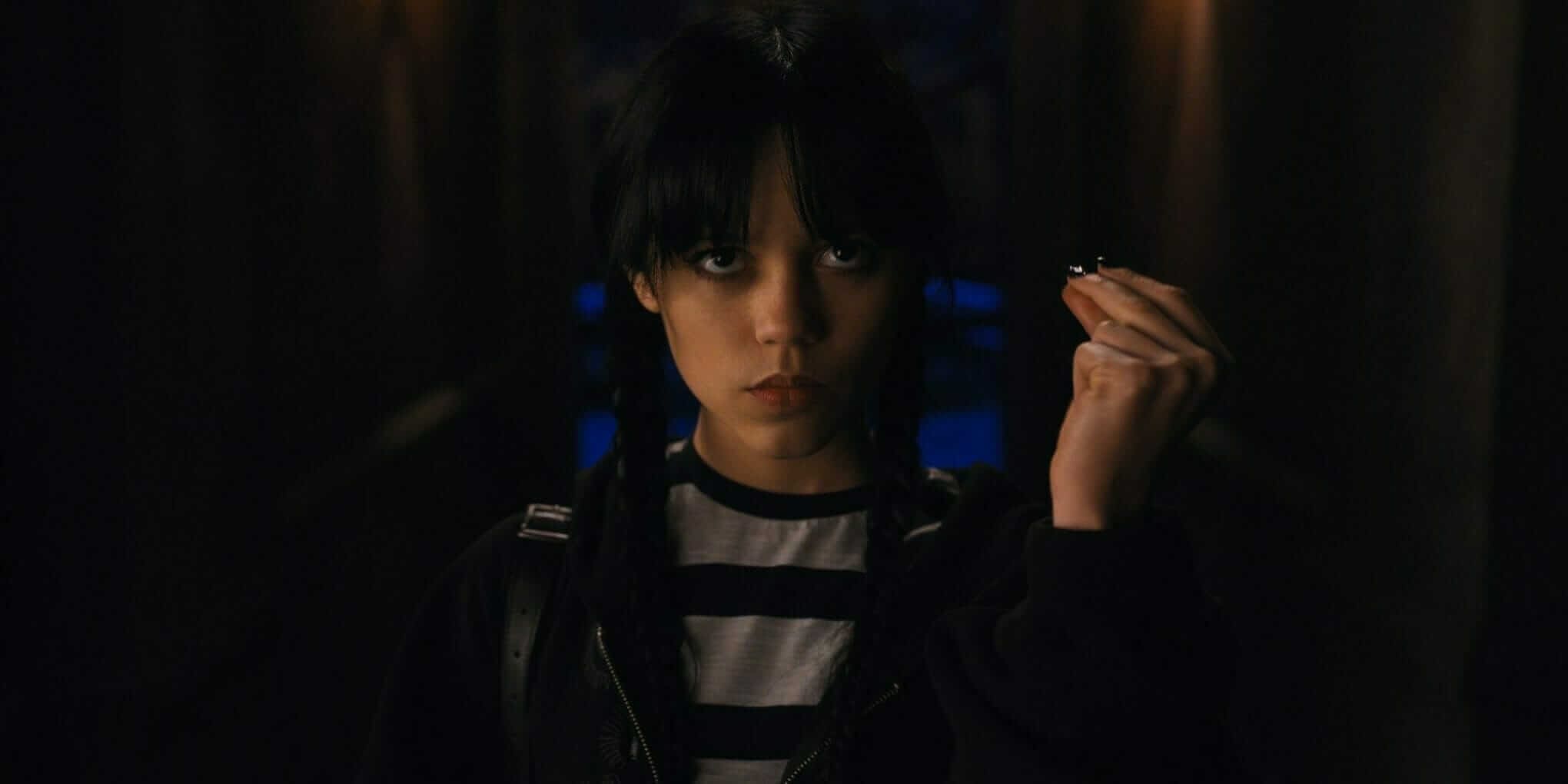 For more than 80 years, Wednesday Adams has been cemented as the creepy and cooky staple of the Addams Family, highlighted by her macabre sense of humor and playful torture. In Netflix’s Wednesday, the character is thrust into a dimly lit spotlight, complete with mystery, a goth aesthetic, and teenage emotions that tear the character apart to build a more complete version of this pop culture icon.

With Tim Burton’s influence in tow as the series’ director, Netflix trusted the showrunner team of Miles Millar and Alfred Gough (Smallville) to build on the success of similar original programming from the streaming giant, such as they had for The Chilling Adventures of Sabrina. What they deliver throughout these eight episodes is a plot-heavy story that becomes engrossingly layered while abandoning a strong focus on character work. The core of genre fiction is neatly nestled in the trifecta of characters, story, and world, of which Millar and Gough struggle to find balance in this Addams Family spin-off.

Set in modern times, Jenna Ortega’s (Studio 666, Scream 2022) Wednesday Addams is transferred to her parent’s alma mater of Nevermore Academy, a boarding school for outcasts. There, Wednesday is thrust into a murder mystery and a dark prophecy that forebodes her future at the school. Piqued by the ominous events, Wednesday becomes lost in an obsession over her future and the dark history of the town surrounding the school, as she seeks to uncover the killer.

Wednesday encounters her biggest challenge, though, in the form of navigating the social spheres of her new high school and the ever-evolving emotional palette of adolescence. Exploring themes of colonization and prejudice, Wednesday is positioned between the “normies” in the surrounding town of Jericho and the outcasts of Nevermore. Even when living with the likes of werewolves and sirens, the off-putting and macabre Wednesday finds herself on the outside looking in, which is just the way she likes it. Or so she says.

“Ortega is challenged with moving past Wednesday’s grim exterior to capture an emotional depth that has never before been asked of the character.”

The series is hooked with an enticing plot, but the mystery is fairly straightforward and does not divert enough from the easy-to-spot, cookie-cutter conclusion. Though it lays its focus on various plot threads, the series never loses sight of its main attraction: The performance of Ortega’s Wednesday Addams. Capturing the dry wit and sarcasm that is expected from popular iterations of the character, Ortega is challenged with moving past Wednesday’s grim exterior and capturing an emotional depth that has never before been asked of the character.

As she has done in previous roles, Ortega carries the emotional tone with ease, excelling in using the character’s body language and facial expressions. She was just as believable in her witty convictions as she was when stepping out of her comfort zone, the latter of which drove some of the more entertainingly campy moments. It is unfortunate that the series sometimes felt more like a story that includes her, rather than a story about her.

Narratively, the series struggles to find focus. Built less on its titular character and more on her surrounding plot threads, these narrative choices end up engulfing the show in a pit of shallowness and redundancy. Feeling overly similar to other coming-of-age thrillers like One of Us is Lying or Riverdale, Wednesday becomes committed to always moving the narrative somewhere new without taking the time to sit with its decisions or characters. So many plot devices competing for time made it seem as though the writers were plagued by the thought of not getting renewed and, thus, had to fit everything in.


Carrying story arcs that focus on the school, the town’s history, and the Addams family themselves, so much of the series is wasted on insignificant plot progressions, like that of Gomez (Luis Guzmán) being accused of murder. The show does attempt to remedy its pace by lending the entire fifth episode to a too-little, too-late focus on its slew of ancillary characters but the series is well entrenched in its plot-heavy habits by that point.

“It is unfortunate that the series sometimes felt more like a story that includes [Wednesday Addams], rather than a story about her.”

Not all of the supporting characters are whittled down to caricatures, however. Some are even integral high points of the story. Even when the show inadvisably pushes forward with a romantic angle for Wednesday, the real heart of the emotional journey is that of her friendship with her roommate Enid, a breakout role for Emma Myers. As tropey as pairing polar opposite characters for the sake of easy development can be, this pair leads a friendship story that pulls you into its touching highs and disappointing lows.

Closing out this ever-impressive close-knit pair is the surprising inclusion of first-time actor Victor Dorobantu (or at least his hand) as popular Addams family member, Thing. It is hard to put a finger on just how they conveyed so much expression through a single hand, but Thing was a necessary addition to Wednesday’s hijinks and served as her socio-emotional guide. Not to say that other characters were not offered good performances, but even Addams Family royalty Christina Ricci’s (Yellowjackets) role as Marilyn Thornhill and Gwendoline Christie’s (Flux Gourmet) turn as Nevermore principal Larissa Weems were not spared from being unrealized narrative fodder.

Truly a coming-of-age story, this series captures the very familiar blend of trust, love, and friendship. Qualities that are tested by a murderous creature and the egocentric personality of the lead character. Netflix’s Wednesday offers a new status quo for the uniquely adored character and glimpses of a more realized teenager with the talents of Jenna Ortega.

There is much to like in the series, but the needle is rarely elevated past a threshold of average. With an overabundance of plot threads, there might be something for everyone, except for the satisfaction of any of these plots feeling well-developed or ultimately satisfying. When character development is allowed, this new series shines with potential for Wednesday to continue exploring the world through her curious perspective, as limiting as that world feels at the moment.

“Netflix’s Wednesday offers a new status quo for the uniquely adored character and glimpses of a more realized teenager with the talents of Jenna Ortega.”

Wednesday is streaming now on Netflix. Have you made the trip out to Nevermore Academy yet? Share your thoughts on Tim Burton’s Wednesday with us over on Twitter or in the Nightmare on Film Street Discord! Not a social media fan? Get more horror delivered straight to your inbox by joining the Neighbourhood Watch Newsletter.

Review: WEDNESDAY (2022)
TLDR
This coming-of-age story challenges the familiar blend of trust, love, and friendship with a murderous creature and the egocentric personality of its lead character. Netflix’s Wednesday offers a new status quo for the uniquely adored character and glimpses a more realized teenage version of her with the talents of Jenna Ortega.
Character Portrayal
90
Emotional Tone
70
Macabre Humor
85
Mystery
60
76