Drak Pack follows the descendants of three of the most famous monsters in the world, Dracula, Frankenstein, and the Wolfman. To make up for the evil their famous relatives did, our teen monster heroes fight against the Organization for Generally Rotten Enterprises (O.G.R.E.) and their leader, the diabolical Dr. Dred. The idea of monsters forming a superhero team was also explored in a live-action series from the 70s and another cartoon in the 90s, but today we’re talking about Drak Pack. Normally a pretty standard group of kids, when the Drak Pack shout “Wacko!” and do a three-way high five they transform into monsters with superpowers! It’s so rad and I clap pretty loud every time it happens. Wacko, indeed!

“…when the Drak Pack shout “Wacko!” and do a three-way high five they transform into monsters with superpowers!”

The tone of the show is like a sillier Super Friends, so you don’t have to worry about scaring the little ones with Drak Pack. I guess there’s merit to that, but I can’t help but think that an eerier atmosphere would’ve helped the show last longer than one season. Oh well, I’m not a cartoon executive in 1980, and probably never will be (unless I find a magic lamp) so for now we’ll just have to enjoy the episodes of Drak Pack that we did get! Drak– He’s the cool ghoul from the title, and the leader of the Pack. He’s got some cool shapeshifting and when he transforms he puts on a bunch of eyeshadow. Also his uncle is the Dracula, who helps out the team. They call him Big D.

Frankie– Even before he transforms, Frankie‘s a big guy. When he morphs, though, he gets GREEN and STRONG and DUMB. This might be a stretch, but you could think of him as the Incredible Hulk of the group.

Howler– He might seem like an ordinary teenager with a nasally voice, but whe the situation gets hairy he does too. Not bound by phases of the moon, Howler can wolf out whenever he needs to. This actually makes him pretty similar to another famous teen wolf.

Dr. Dred– He’s the Big Bad of the series, and he’s not immediately based on a classic movie character. He has lots of gadgets, and he loves to put his name in them (Drednought, Dredquarters, you get the ideal).

Vampira– As far as I can tell, the femme fatale of O.G.R.E. has no connection to Maila Nurmi’s iconic character of the same name. She sure looks like her, but the cartoon version has shapeshifting powers the horror host didn’t. This nearly copyright-infringing cool vamp is into Drak, which seems like it probably shouldn’t be allowed.

Mummyman– O.G.R.E.‘s answer to Frankie, Mummyman is the lumbering brute of the organization. Unintelligent, as well as unintelligible, Mummyman is just part of the club to push heavy stuff around and reach the top shelf. There’s not much to say about Mummyman that isn’t covered in the name.

Toad– An anthropomorphic frog with a voice like Peter Lorre, Toad is Dr. Dred‘s none-too-loyal henchman. He’s constantly self-flagellating, and occasionally asks the Drak Pack if they’re hiring. Slimy, ineffective, and off-putting, Toad is easily my favorite character on the show. Quick note: if you’re thinking, “he’s not an anthropomorphic frog, he’s a toad,” consider this- I don’t know the difference, and I refuse to learn anything on a Saturday morning. Color Me Dredful: The first episode of the show, this is an important one to watch because it begins with Dr. Dred saying he’s always getting bested by the Drak Pack. The show just starts with the bad guy losing all the time!

Happy Birthday, Dr. Dred: Toad wants to give Dr. Dred a memorable birthday, but nothing goes according to plan. Am I including this in the list just because my half birthday is this month? Yes!

Dred Goes Hollywood: What if there were movies about draculas, Frankensteins, and wolfmen? Well, we don’t have to imagine because that’s our reality, but in this episode Dred has made a slanderous film about the Drak Pack!

Bad news, music fans- the Drak Pack theme song is nothing special. They took a name that not only rhymes with itself but also half of the English language, and then did nothing with it. It’s barely even a song. No one sings. It’s just a monologue explaining the premise of the show with some backing music. I’m not happy to report this, but I have to rate the Drak Pack theme song CRAP. 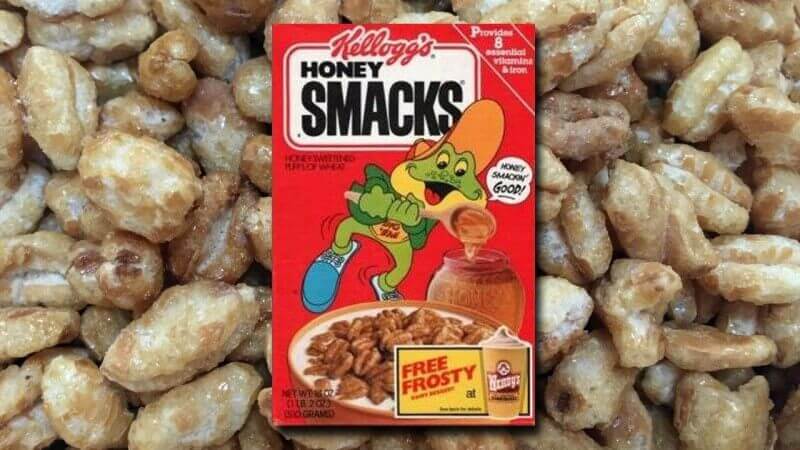 For this month’s NOFS-exclusive Crunch Time cereal pairing, I thought long and hard about the essence of Drak Pack. Specifically, how easy it is to rhyme things with the title, even if the theme chooses not to. So I picked Smacks, to spite the intro of a TV show that only ran for one season. Smacks (also known as Honey Smacks) is the cereal with the frog mascot, much like Toad from O.G.R.E. There have been a million Smacks mascots (Smackscots?) but Dig’em Frog has had the longest run, as well as being the mascot of the cereal for the duration of Drak Pack‘s lifespan. Also, he’s the most froglike, and I’ve gotta give it up for a cool frog. So shout “Wacko!” and pour yourself a bowl of Smacks while you enjoy Drak Pack!