[Awfully Good] THE HORROR OF PARTY BEACH is a Beachy B-Movie Bonanza! Welcome to Awfully Good, where we celebrate movies that suck! Keeping with January’s Black and White Fright theme, tonight’s movie is The Horror of Party Beach! It’s a timeless tale of love, loss, bikers, bikinis, and radioactive waste spilling onto a skull and making it grow into a fish person.

Before we get into that, though, let’s cover some ground rules. Rule 1) This is a positive place. We’re not just here to dump on movies because there’s a boom mic in most of the shots. This is where we can revel in movies that don’t get any awards. If we say a movie is “one of the worst of all time,” that’s not a slam; it’s part of the charm. Rule 2) wait thirty minutes after you eat to do battle with radioactive fish people. Now that we’ve got that out of the way, check out this trailer and meet me at the end!

“A timeless tale of love, loss, bikers, bikinis, and radioactive waste spilling onto a skull and making it grow into a fish person.”

The Horror of Party Beach is a 1964 beach party/horror film. If you’re not familiar with the beach party genre, here’s a quick primer: in the 60s, there was a slew of films (mostly starring Frankie Avalon and Annette Funicello) where young adults would go hang out on the beach. The movies would feature up-and-coming surf rock bands and footage of surfing, both of which were devoured by drive-in audiences.

These movies were cheap to make and had pretty good returns, so many were produced in a short period of time. Horror of Party Beach takes the familiar formula (beach, bands, babes) and adds in fish monsters, making it the greatest concept for a movie yet. The tagline for the film was “Weird Atomic Beasts Who Live Off Human Blood!!!” and I think we can all relate to that sentiment. There will never, ever be a better tagline.

The film begins with Tina and Hank, a couple of Adult Teenagers with wildly differing outlooks on life. Tina just wants to drink booze and hang out at the beach, but Hank wants to do science. They have a brief argument where Hank‘s like, “oh, if you drink anymore of that swill then I’m gonna leave you on the beach, alone and inebriated” and the audience says “this is the hero of the movie?” Horror of Party Beach injected a flawed protagonist into the proceedings, probably unintentionally.

While Tina and Hank are debating moral philosophy, some dingus tosses a barrel of radioactive waste into the ocean, which sinks down to the bottom. It covers a human skull (a pirate skull?). Through the power of science, the skull starts growing flesh and eventually becomes a fish monster. Up on shore, surf rock band The Del-Aires are playing a set in the sand. Horror of Party Beach is a beach party movie after all, and you’ve gotta have a featured band. A bunch of bikers show up to presumably crash the party, but they start by just dancing and having fun. While this is happening, the fish monster rises from the sea… with hot dogs in its mouth? I’m sure the monster designer thought that the weird, stubby tentacles in the creature’s face were scary, but it really does look like a bunch of hot dogs.

“I’m sure the monster designer thought that the weird, stubby tentacles in the creature’s face were scary, but it really does look like a bunch of hot dogs.”

Tina starts to dance with one of the bikers, but Hank decides he likes her again so he starts trying to pull her away. This leads to him brawling with the entire biker gang. At one point during the fracas, a bunch of bikers pick up the leader of the pack and use him as a battering ram, a technique that results in concussion like seventy percent of the time. Not long after, it’s time for The Del-Aires to play the lead single from the soundtrack, The Zombie Stomp. This is accompanied by a primitive form of mosh pit, basically just a bunch of people falling over each other, which is meant to represent zombies. This is called Interpretive Dance, and it’s proof that Horror of Party Beach is art.

While everyone’s busy doing the zombie stomp, drunk Tina‘s like “I’m gonna sit on a freakin’ ROCK and get choked out by a fish monster.” Honestly, it’s a mood. Then her bloody corpse washes up on the beach, a party foul, so the scene kinda dissipates. We’re then introduced to a senior scientist, his housekeeper (who is not the most racist portrayal in a black and white movie, so that’s a small victory), and his teenage daughter who’s like, forty. She’s going to a sleepover, as Adult Teenagers often do, and she meets the rest of the gals in a cabin. They sing a folk song and have a pillow fight, but look out y’all cuz now there are MULTIPLE fish monsters and they’re here to turn this cabin into a meat grinder. Soon, Horror of Party Beach is just *lousy* with fish monsters, and it’s gonna take all the science and luck in the world to turn the tide. I’m not gonna spoil the ending, because I’m not a monster, but let’s just say things get salty.

If you wanna watch Horror of Party Beach, you can pick it up on DVD or Blu-ray, or you can rent it on Amazon Prime. If you prefer to watch it with commentary from a guy and his robot friends, there’s also a Mystery Science Theater 3000 episode where they riff on it. I love this movie, and it’s proof that just because something’s in black and white, that doesn’t mean it’s classy or artsy. I think we forget about that sometimes.

What’d you think of Horror of Party Beach? Let us know over on Twitter, Instagram, Reddit, and the Horror Fiends of NOFS Facebook group! For more rock ‘n’ roll beach parties and fish monsters holding a bunch of hot dogs in their mouths, stay tuned to Nightmare on Film Street. 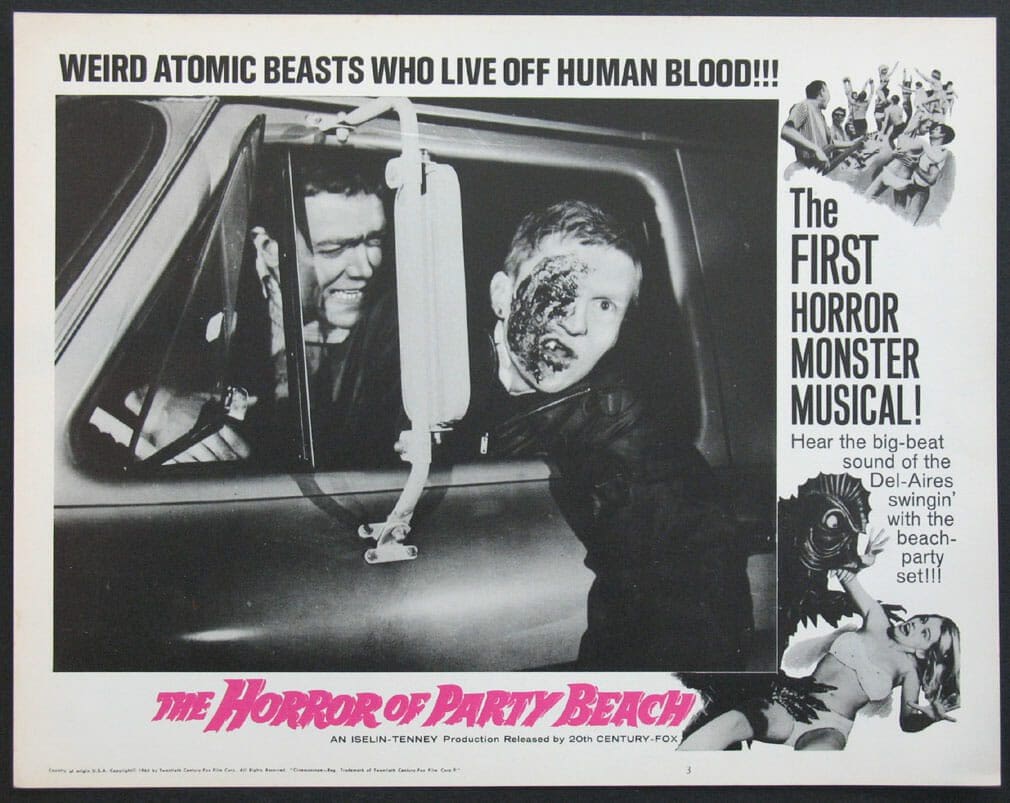