Welcome to Awfully Good, where we celebrate trash cinema! In keeping with August’s Hot As Hell theme, tonight’s feature presentation is Drive Angry. It’s a road trip movie where Nicolas Cage escapes Hell and hunts down a satanic cult, but we’ll get to that in a second. First off, some ground rules. 1) Just because we call something “garbage” or “trash cinema” or “no fire in Hell is hot enough for what this director deserves,” that’s not a slam. We’re here to have a good time, not dump on easy targets. 2) If a mysterious stranger in a suit appears and asks “where I am?” do not tell him the truth. Now that we’ve got that out of the way, let’s dive into some historical context for Drive Angry.

Much smarter philosophers than me have gone back and forth on the topic of Nicolas Cage. Is he a good actor, or a bad one? There’s an episode of Community where an entire college course is devoted to this question and I’ve been online, in the real world, long enough to know that people have some very strong opinions about this. It’s not my place to say whether he’s good or not, but here’s what I do know about Nicolas Cage: he was in Ghost Rider.

“Don’t get me wrong, Drive Angry is trash, but it’s enjoyable trash instead of boring trash.”

Ghost Rider is my favorite superhero. There have been a few incarnations, but the original is Johnny Blaze, a stunt motorcyclist who sells his soul to Satan. This is later retconned to be the demonic entity Mephisto pretending to be Satan, who’s like, another guy… look, comic books are complicated. The important thing is Ghost Rider was made into a feature film in 2007, Nicolas Cage played Johnny Blaze, and that movie was awful.

Speaking of 2007, do you remember that year? People owned dedicated MP3 players and wore shutter shades. Robert Rodriguez and Quentin Tarantino released Grindhouse, a double feature homage to the seedy cinema of yore. It wasn’t a box office success, but it did inspire a ton of similar media. From video games (WET, House of the Dead: Overkill, Shank) to board games (Last Night on Earth) to comics (Grindhouse: Doors Open at Midnight), throwing a film grain filter on your work and dropping some f-bombs in the dialog were a surefire way to give your project an ~aesthetic~. Now, you might be thinking, “a grindhouse aesthetic would go great with a 1970s story about a biker with ties to Satan.” Enter: Drive Angry.

Drive Angry is the best Ghost Rider movie starring Nicolas Cage ever made. No, he never transforms into a flaming-skull brute with a chain, and he doesn’t ride a motorcycle with flaming wheels, but it matches the tone (and honestly, the plot points) of the comic book a lot more closely than the ill-fated 2007 affair. Don’t get me wrong, Drive Angry is trash, but it’s enjoyable trash instead of boring trash. That’s what this column is all about! So finally, without further ado, let’s hit the road.

Drive Angry begins with Nicolas Cageescaping Hell in a muscle car. The character has a name, but I won’t insult both of us by referring to him as anything but Nicolas Cage. Admittedly, this opening sequence looks like a cutscene from a Hot Wheels computer game, but it’s still a pretty rad way to start your movie. Pictured above is Johnny Blaze from the Ghost Rider comics. Technically, this is from after Blaze stops being GR, but I can’t picture a diehard comic book fan being pedantic. In this panel, he has longish blonde hair and a pistol-grip shotgun with shells on the side. paired beside it, we have Nicolas Cage, who portrayed Johnny Blaze in an unrelated movie. 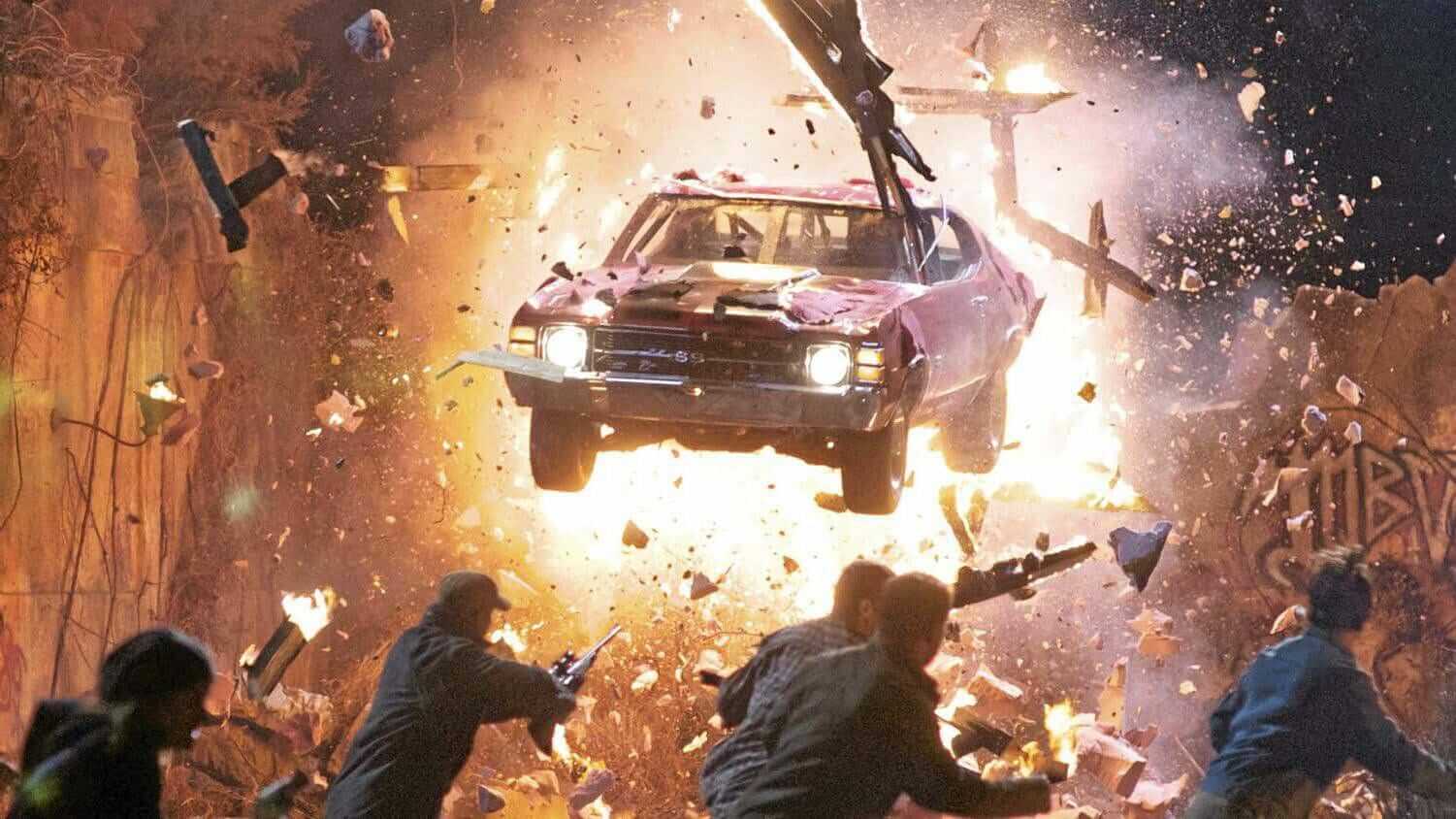 Nicolas Cage blasts a dude’s hand off with the aforementioned shotgun, sending a tire iron hurtling toward the screen. That’s right, this movie’s in 3-D BAYBEEE. Nicolas Cage goes to a diner, where he meets a couple of waitresses. One of them is really, really into him, and the other drives a Charger. She’s the co-star of this movie, and the car is her defining characteristic. I don’t mean that as a dig, this just isn’t the kind of movie that needs “character traits” or “plot”. A guy in a suit shows up looking for Nicolas Cage. He’s The Accountant- the accountant of Hell, and he’s maybe a little bit too good at acting to be in Drive Angry.

I’m skipping ahead a little bit, because details aren’t important, but Nicolas Cage has a sickass gun that he keeps in a briefcase, and he ends up on the road with Diner Waitress and her Charger. Through a series of flashbacks, we learn that the target of the CAGE RAGE is a satanic cult leader who looks like Chris Gaines. And to the one person reading this who appreciates that: you have my sincere thanks. Before long, we reach what an academic might consider the defining scene of the movie. Nicolas Cage is hooking up with a cocktail waitress, smoking a cigar, with all his denim on. When she asks him why he’s not as naked as her (and she is naked naked), he says “I never disrobe before a gunfight” and then IMMEDIATELY starts shooting cultists. Now, I know what you’re thinking: does a cultist throw a tomahawk at him, barreling toward the screen in 3-D and flying so close to Nicolas Cage’s head that it slices off a lock of his greasy blond hair? Friend, that’s exactly what happens. This is the essence of Drive Angry.

The Accountant chases our protagonists in a cop car, and we finally get to see the sickass gun from the briefcase in action. Nicolas Cage explains, kind of, that it’s a mystical gun with arcane powers. From here on out, it’s a pretty straight shot toward Nicolas Cage‘s revenge. At one point, he gets his eye shot out. It takes a little bit of time, but it regenerates! The effect is so much better than the rest of the CGI in Drive Angry that I’m pretty sure they blew the entire budget on this one bit. That, or they shot Nicolas Cage for real and his powers caused the eye to regenerate. The Nicolas Cage Wikipedia is all over the place.

Nicolas Cage ultimately has to do battle with the satanists on their own turf. Will he get his revenge? What’s up with the big, magic gun? Will the car survive? Find out by watching Drive Angry! This movie was a big turning point for me. I was big mad at Nicolas Cage when I walked out of my theatrical screening Ghost Rider, but it took me until this movie to come out to realize it wasn’t his fault. Nicolas Cage actually makes a pretty rad Johnny Blaze… just not in Ghost Rider. So thank you, Drive Angry, for being the movie to right the wrong. 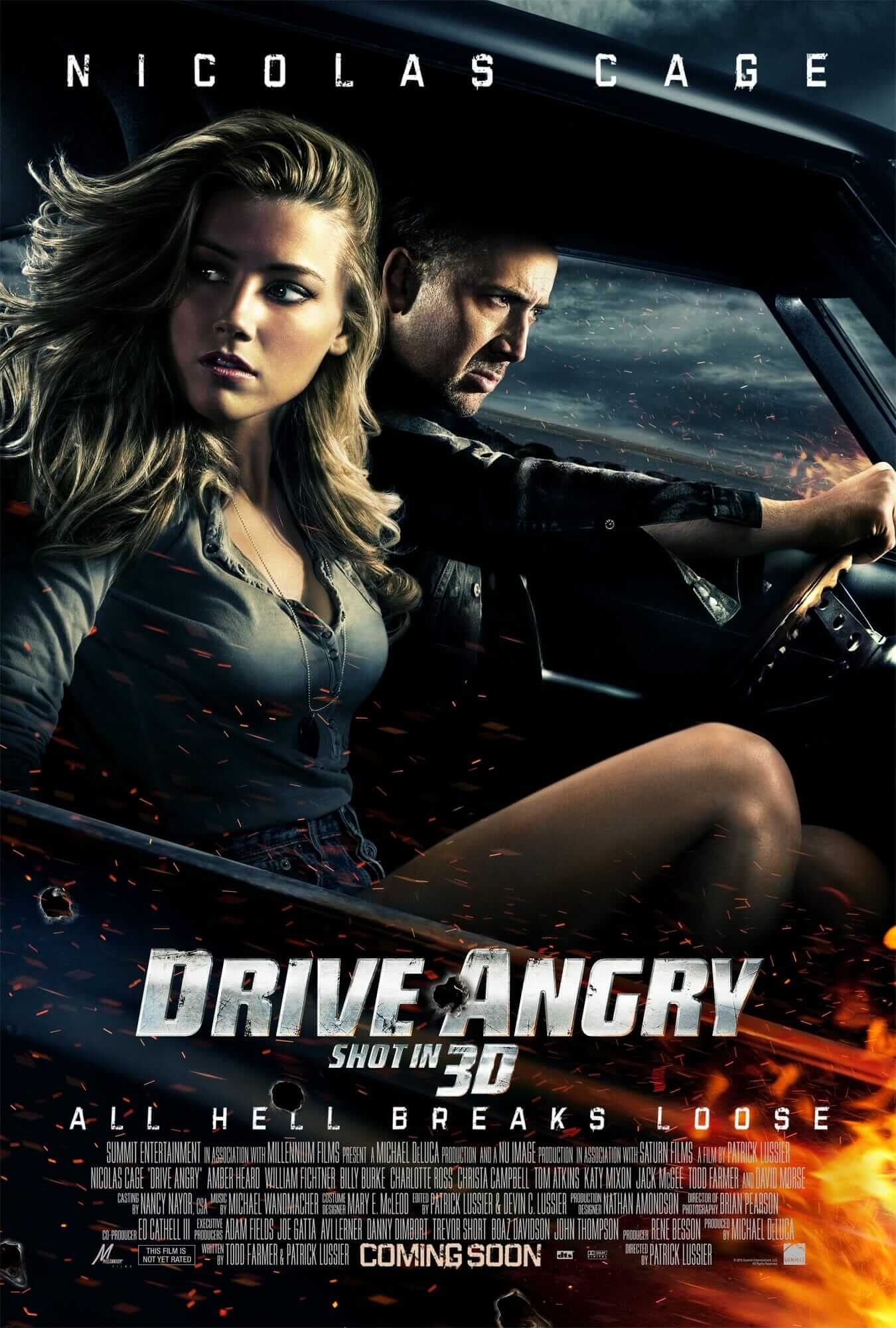