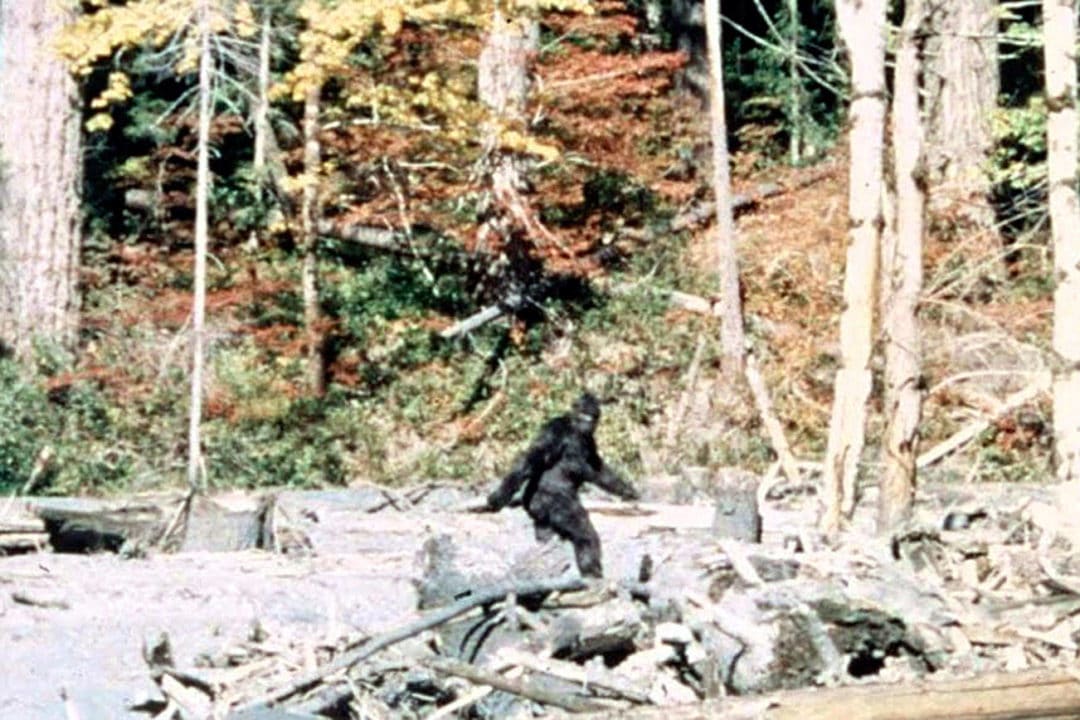 “What frame of any film has been more iconic?” asks Forrest Burgess, co-host of the Astonishing Legends podcast. “We all know what Jason Vorhees looks like, and Freddy Krueger. But all you have to do is show someone that outline, and they know immediately what that is.” Forrest is speaking with me about the Patterson-Gimlin Film, the infamous piece of footage many believe to showcase a real, live Bigfoot. You know the frame he’s referencing; it’s an image of a large, hairy biped (affectionately dubbed “Patty”) sloughing into the distance, glancing back toward the camera and into the eyes of every believer that will ever see the film. Forrest and fellow host Scott Philbrook recently immersed themselves into the mystery and legacy of the Patterson-Gimlin Film, crafting an investigative series on its story. I reached out to ask Scott & Forrest about tackling such a huge mystery and, ever ready to talk about the unexplained, they agreed to chat.

Scott and Forrest had the idea to explore the PGF as a “specific area” of Bigfoot lore, examining a broad mystery through the lens of a “small incident.” What they found, however, was anything but. “When you start looking into it… you start realizing it’s so much more than that,” says Forrest, “It may be the most debated, the most highly scrutinized piece of paranormal evidence ever.”  But it wasn’t just a debate of authenticity that Forrest and Scott encountered. It was a story of high stakes, disappearing evidence, and dedicated investigators, all interlocking to create a mystery that has endured for over half a century.

“It may be the most debated, the most highly scrutinized piece of paranormal evidence ever.”

The Astonishing Legends hosts began by learning the story of Roger Patterson and Bob Gimlin, the adventurers who filmed the alleged cryptid in the Northern California. Far from the random wilderness encounter you might assume it was, getting the infamous shot of Bigfoot was an extremely dangerous enterprise. Patterson injured his hip when he fell off his horse to film the creature, but things could have gotten even worse for the pair. “This gets lost in the story a lot,” Scott tells me, “but they nearly died just trying to leave after they made the film. It was raining, the road was sliding down the mountain, the truck was sliding off the road. It was real Day After Tomorrow stuff.” Thankfully, the pair did survive their hectic, historic drive. That’s why, while doing their research over sixty years later, Scott and Forrest got to speak with Bob Gimlin. Their interview with him, they’d discover, was some of the most convincing evidence of the film’s veracity that they could find.

“He’s a really amazing dude,” Scott shared, “with this amazing background and skillset for tracking, rodeoing, cowboying. And when you look at all of that stuff, and the sincerity of his nature, and then you meet him in person, it just doesn’t track that he’s lying. Bob’s impression was that he saw something real, and as he’s said, if this was some kind of hoax, Bob was not in on it. He clearly, fully believes that he saw an unknown cryptid that day. There’s just no question in his mind”.

Over the course of their research, Scott and Forrest were able to piece together what it would’ve taken to fool the tracker and wilderness expert, a task the hosts claim would have been “monumentally difficult.” Not only would the costumed person have to make a convincing costume, say the pair, they’d have to be waiting for just the right time to emerge from a wood, escape through a rugged terrain without falling, and disappear from Gimlin’s line of sight. “Plus, they’d run the risk of getting shot by Bob,” says Scott, adding, “Who is a crack shot.”

With the story of the Patterson-Gimlin trek compiled, Scott and Forrest’s next task was to examine the footage itself. To do so, they consulted studies from around the world and across the spectrum of scientific analysis, accessing records from primate locomotion scientists in Russia to Californian photo experts. But in all their investigating, one researcher stood out as having an especially useful analysis of the footage. That researcher is Bill Munns, special effects expert and movie costumer. Bill used his background in making movie monsters to break down what’s recorded in the PGF, and with a background in post-production and SFX themselves, Scott and Forrest took a special interest in his work.

“[…] for all the clues one can collect about the Patterson-Gimlin film, there is a giant one that no one can seem to find: the original footage.”

Bill has an extensive (some might say obsessive) collection of PGF studies. Over several years, Bill has scanned every available copy of the film, splitting them into individual frames and comparing his findings to what he knows of costumes and movie make-up. Through interviewing Bill and reading his work, Scott and Forrest learned about the location of the shooting, the dimensions of the creature, and the unlikeliness (in Bill’s professional opinion) of the Bigfoot being a person in a costume. The hosts credit Bill’s work as being “the most thorough part of the investigation there is,” but like every other source they pursued, even Bill’s exhaustive work doesn’t contain definitive answers to the PGF mystery. In fact, their talks with Bill revealed that, for all the clues one can collect about the Patterson-Gimlin film, there is a giant one that no one can seem to find: the original footage.

Yes, you read that correctly; the original Patterson-Gimlin film is missing. Since its disappearance years ago, multiple Bigfoot researchers have tried to find it with various estates connected to Roger Patterson. They’ve all come up with nothing. Thankfully, many early copies of the footage exist, despite the original being in the wind or, worst-case scenario, destroyed (then again, I don’t think anyone’s checked the government bunker where they keep the Holy Grail and the real Paul McCartney). Still, Bill has not given up on finding the original, and if he does, Scott and Forrest tell me they’ll be some of the folks he calls. With the “lost artifact” narrative of the OG copy and the thrilling story of Patterson & Gimlin’s sighting, Scott and Forrest had plenty of information to craft a compelling podcast around the PGF. But as anyone who listens to the show knows, the pair don’t present any case without trying a little out-of-the-box thinking, and this series is no exception. For a totally unique perspective, Scott reached out to an acquaintance of his: Saturday Night Live superstar Jorma Taccone.

Jorma is most famous for being part of the parody music group The Lonely Island, but in 2009’s Land of the Lost, Jorma played a primate called Cha-Ka. To do this, Jorma donned a monkey costume that looks extremely similar to Patty. From Jorma’s experience in the suit, Scott and Forrest were able to gather just how much work it takes to make and present a realistic primate costume for film, and beyond that, the hundreds of thousands of dollars it costs. “If this was a hoax,” Forrest is fond of saying, “It’s one of the best anyone’s ever pulled off.” Apparently, he also means it’s one of the most expensive.

Finally, Forrest and Scott were ready to release their series. All counted, it took up a full seven episodes of content, stretching over fifteen hours of podcast. Reviews trickled in slowly, say the podcasters, but they were largely positive, especially from those familiar with Bigfoot lore. “Nobody that’s an expert on this has come out and said ‘you missed the mark.’ The people into the subject are on board with it,” says Forrest. But from what I’ve read of the reviews, I know that’s a modest understatement. When I press the team further, I get as honest an opinion as I can from a couple guys who are too humble about their own work; “We did what we set out to do.”

The Astonishing Legends Patterson-Gimlin film series wrapped four months ago, but as I speak with the two hosts, I can tell the investigation will stay with them for a long time. For Scott, it was a challenge to his beliefs. “When I went into it, I thought it was a guy in a suit,” he admits, “I came out on the other side of it completely convinced it is not.” To Forrest, it was a reminder of why mysteries like this matter to our culture. “It made me think philosophically,” he says, “About why and how we’re doing this. How do we think about the weird stuff we come across? Where do we file that? How do we process that as humans?”

You can start listening to the PGF series on the Astonishing Legends website or wherever you find your podcasts. Their series is thorough, entertaining, and listener-friendly; I’d go so far as to call it definitive. Still, I have my doubts that this will be the last time Forrest and Scott visit this mystery. Their line with Bill Munns is still open, and somebody’s got to find that missing original footage. Besides, who’s to say the creature in the footage won’t show up again sometime soon? The Patterson-Gimlin film is, after all, an extremely popular monster movie, maybe the most-watched ever made. And if Patty is familiar with the state of monster movies today, she’d know it’s just about time for a reboot.

For more Freaky Fun like this, make sure to follow NOFS on Facebook, Instagram, and Twitter. We’re running monster movie articles all throughout October, so you don’t want to miss any of our features on creatures. And for all the best horror interviews, news, and film reviews, keep lurking at Nightmare on Film Street.