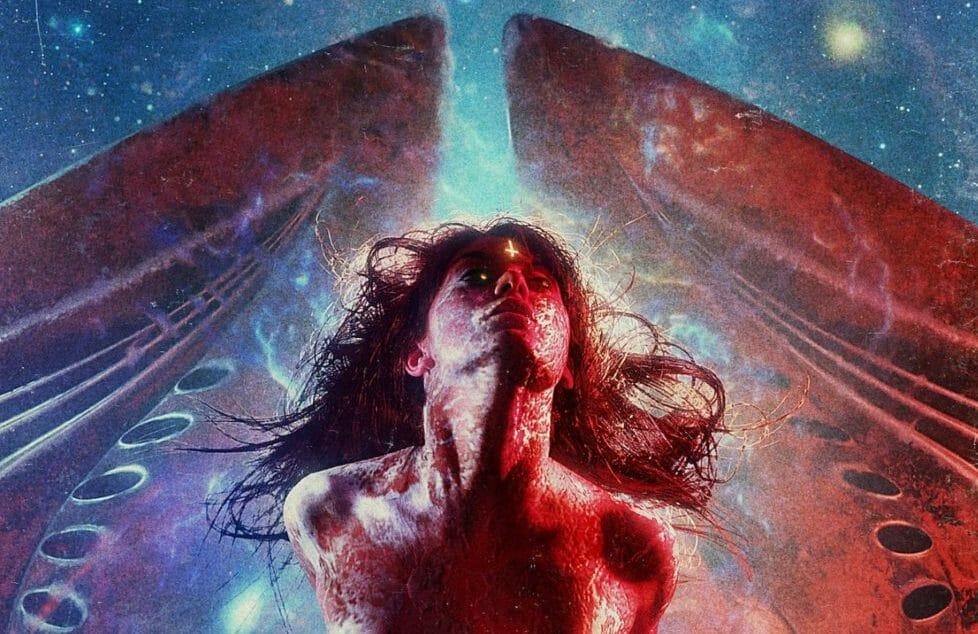 There are good reasons moviegoers are wary of CGI. If it’s not done well, it can be distracting. Even when it is, it runs the risk of becoming the point of the movie, overriding honest character reactions for what looks coolest in slow-mo. But every once in a while, there’s a movie that uses CGI to its best effect, elevating a story instead of taking away from it and creating memorable, beautiful visuals completely unlike the average superhero vehicle. Such is the case with Blood Machines.

Directed by the excellent team of Raphaël Hernandez and Savitri Joly-Gonfard, Blood Machines is a space opera on Molly, the middle ground between 2001: A Space Odyssey and an EDM music video. It follows the story of a tiny human-made spaceship and its even tinier crew. The crew encounters a strange ship in a strange galaxy, beginning a confrontation that gets progressively stranger from there. Once the human and alien ships are on the ground, the crew finds out that this alien craft is actually a living being, a combination of technology, organic matter, and some amount of curious magic.

“[…] a space opera on Molly, the middle ground between 2001: A Space Odyssey and an EDM music video.”

That doesn’t stop the hot-headed captain of the human spaceship from firing three deadly energy bolt’s into the alien ship’s hull, killing the alien creature as its crew begs him for mercy. Just as the movie’s audience is 100% sure their sodas have been laced, the film gets even weirder, having the alien crew perform a resurrection ritual on the ship that sends its deific soul form (a naked lady adorned by a glowing, upside-down cross) bursting out of the craft and into the atmosphere. The captain boards the ship again and the crew sets off in pursuit of the ship’s soul. And that’s just the intro!

You may assume from the description that the storytelling in Blood Machines is confusing, but nothing could be farther from the truth. This story is exceptionally told and paced. The characters and objectives are clear, though little to no expositional dialogue shows up. Hernandez and Joly-Gonfard, who also wrote the script, absolutely nail the honesty in this story, fleshing out flawed and full characters despite the hour runtime this film has to work with. Actors Natasha Cashman, Anders Heinrichsen, and Elisa Lasowski do a great job with the script. Lasowski, who plays one of the alien ship’s crew members, is especially impressive. To give away how she does it would give away the ending, but we can say without spoilers that her performance becomes as physical as it is emotional, at points rising to the level of Doug Jones in Shape of Water. Along with a moving script and engaging plot, Lasowski and her fellow cast members make Blood Machines as human as it is alien.

Still, the magic of Blood Machines is definitely in its visuals. Not only do the designs of the ships and space travel effects challenge what we’re used to in science fiction, they actually interact differently with the world. For example, blasts from a laser gun creates a neon, electric crackle that lasts, like a visual echo on the screen. When something gets hit by the blast, the area around the strike scrambles and pixelates, as the digital film itself has been struck. It sounds odd, but by using imagery like this, Blood Machines visual designers and creators Seth Ickerman and Carpenter Brut avoid the “uncanny valley” problem from which so much CGI suffers. Instead of trying to make the science fiction elements look as real as possible, Ickerman and Brut choose to stylize them. This lets the audience get lost in the surrealism of the scifi universe of Blood Machines, without focusing on what they can tell isn’t real. Big-budget science fiction flicks should take note.

Finally, this review wouldn’t be complete without mentioning the incredible audio design that goes along with it. Complementing the surreal images of the film is music that’s both weird and familiar, a different kind of soundtrack with 80s synth influences. Not only is the music itself great for the film’s sequences, it actually blends in with what’s happening in the narrative. For example, the laser gun we mentioned earlier makes a guitar chord sound when it goes off. There’s also the spaceship’s computer, which makes an electric keyboard sound when the crew interacts with it. All the sound comes to a head in one particular scene at the end, when the film’s performances, visual and audio aspects all come together to create one of the most fascinating segments in a genre film in recent memory, transporting the audience to Blood Machine‘s dimension of sound and sight as much as the ship transports the crew there.

“….a wild and masterful genre piece…”

Whether you’re a fan of soap opera staples like Star Trek and Star Wars or you want something entirely new out of the genre, Blood Machines should be on the top of your watch list. It stood out as a wild and masterful genre piece in a festival that specializes in wild and masterful pieces, and if it ever heads to a festival near you, we can promise it’s worth the ticket price. But even if there isn’t a festival playing the film in your area, you’re still in luck. Blood Machines is on Shudder right now, and if you’re a fan of genre work at all, it is an absolute must-watch.

When you check it out, let us know what you think on our Facebook, Instagram, and Twitter pages. For more coverage of what’s at this year’s Brooklyn Horror Film Festival, and for all your horror movie reviews, news, and interviews, keep lurking at Nightmare on Film Street.

TLDR BLOOD MACHINES is synth music come to life, with unforgettable and stylized visuals from creators Seth Ickerman and Carpenter Brut. This lets the audience get lost in the surrealism of the scifi universe of Blood Machines, without focusing on what they can tell isn't real. Big-budget science fiction flicks should take note. Whether you're a fan of soap opera staples like Star Trek and Star Wars or you want something entirely new out of the genre, Blood Machines should be on the top of your watch list.