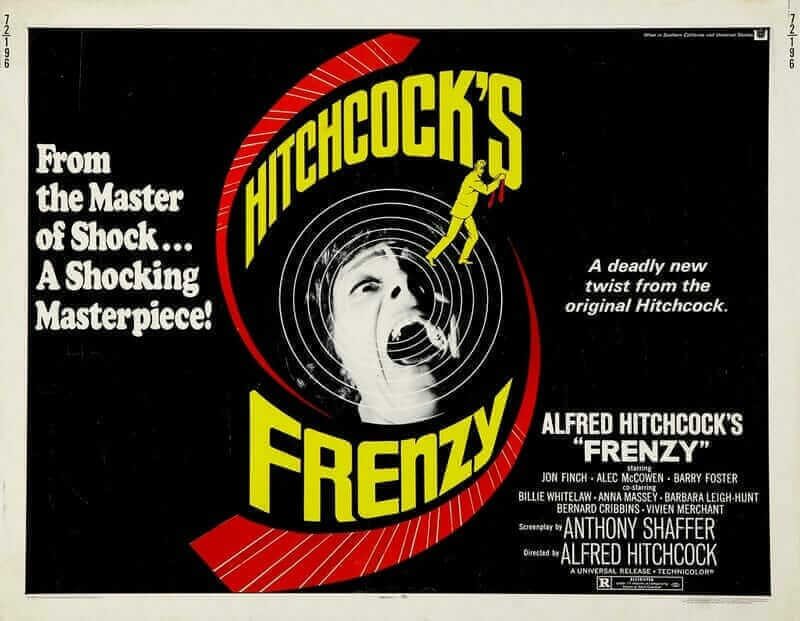 On June 21st 1972, Alfred Hitchcock’s sleaziest film was released into the world. Frenzy captured the vibe of London in the early seventies. The fashion, the hustle and bustle of the city streets and the comfort of seeing British landmarks such as the River Thames and Tower Bridge. However, underneath the glossy exterior, we are exposed to something much more sinister. Unspeakable macabre is awaiting to unfold before our very eyes, and like the true master he is, Hitchcock brings the suspense in spades. Go pour yourself a pint and let’s celebrate fifty years of Alfred Hitchcock’s Frenzy.

Frenzy is the nastiest and most brutal of all of Hitchcock’s back catalog. It depicts the gruesome tale of a necktie murderer roaming the streets of London. As the death count rapidly increases, Richard Blaney (Jon Finch) is named the culprit. After his ex-wife Brenda (Barbara Leigh-Hunt) and current girlfriend Babs (Anna Massey) are both murdered, it’s only natural that the signs point to him. But is everything how it seems? Of course not, this is a Hitchcock film.

“Frenzy is the nastiest and most brutal of all of Alred Hitchcock’s back catalog.”

Let’s introduce you all to the film’s resident sadist and all-around “Jack-the-lad” Bob Rusk (Barry Foster). Rusk is an owner of a Covent Garden fruit stand. Not only does he have a flourishing career, but he also appears to be helpful, kind, and accommodating. And he tops that off by looking clean-cut in a freshly pressed suit. He also appears to be a great friend to Blaney. He doesn’t sound too bad on paper, does he? But bubbling under the surface is a sadistic killer, waiting for their next ‘fix’. The juxtaposition between his happy-go-lucky persona and his true barbaric disposition is unnerving. The more people trust his outward façade, the more he can commit his heinous crimes in plain sight.

It’s safe to say you can apply Hitchcock’s ‘Bomb Theory’ to Frenzy. Having the audience know who the necktie murderer is within the first thirty minutes of the film is exceedingly clever. The reason being; The audience is watching it all unfold slowly and meticulously. We aren’t being surprised by a masked killer swiftly taking the life of another only to disappear into the shadows. Instead, we are yelling at the screen, pleading with the victim not to trust this maniac. We see the fear in the woman’s last moments, and that is far more intense and harder to watch.

One of the most distressing scenes is the death of Blaney’s ex-wife, Brenda. She runs a successful matchmaking agency, and one of her customers was Rusk. Unfortunately for Rusk, they couldn’t get him a partner, as he had specific sexual peculiarities. However, Rusk won’t take no for an answer and visits Brenda while she is alone in her office. After an extremely uncomfortable exchange, Rusk rapes and strangles her to death. What makes this scene all the harder to digest is the realism. There isn’t any dramatic music being played to take you out of the scene. It’s just the audience playing the role of a reluctant voyeur.

One of the things you can count on when watching a Hitchcock film is comedic relief. Those beats can be more subtle in some of his other films, however, in Frenzy it’s as if we are getting commentary from two of the film’s co-stars. Chief Inspector Oxford (Alec McCowen) has doubts that Blaney is the killer, after hearing him declare that Rusk is the man they are looking for. While quietly investigating Rusk, Oxford bounces potential theories about his investigation to his wife Mrs Oxford (Vivien Merchant). The way this couple interacts with one another and the respect they have for each other’s theories is very authentic and the most warmth you will see in this film.

Despite them discussing this case, we also get to see a slight peek into their marriage. Mrs Oxford is clearly fond of her husband, and she appears to be the stereotypical homemaker, proud of the home that she keeps. But the hilarity ensues when we see her ghastly yet somewhat innovative (for the time) cooking skills. As Inspector Oxford relays the day’s events and the progress of the investigation, we see him trying to work out how the hell he is going to eat her repugnant concoctions. What is also clever about having this commentary within the film, is not only does it bring you up to speed regarding their understanding of the investigation, but it also allows the audience time to breathe.

When it comes to Frenzy, Hitchcock constantly lulls the audience into a false sense of security. He tricks you into believing that everything will be fine. However, that is not what happens. One of the unsung heroes for the film is the musical score by Ron Goodwin. His score is very light, whimsical, and, at times, fun. It integrates perfectly with the London scenery and landscapes. Music has the power to make you uneasy and sense upcoming moments of dread, but it also is an incredibly overwhelming force that makes you forget any of the prior frights and intensity. Frenzy does this with ease.

Hitchcock made an array of films that cover many components of the horror and thriller subgenres. Even if you do not like some of the films in his back catalogue, there is at least one of them that will resonate with you. We have seen his silent film era, the black and white thrillers, and the wonderful colour palettes splashed across the screen in the 50s’ and 60s’. However, Frenzy really brought back some of the magic experienced in his early works with a modern and more violent twist. It is unequivocally his most unique film, comparatively speaking. It has all the elements that we love to see in a Hitchcock film, but with a little more grime and a little more terror.

Are you a fan of Alfred Hitchock’s sleazy proto-slasher Frenzy? Will be watching it for the first time tonight in honor of it’s 50th anniversary? Let us know how it stacks against your personal favorites from the Maestro of Suspense over on Twitter, Reddit, Facebook, and in the official Nightmare on Film Street Discord. Not a social media fan? Get more horror delivered straight to your inbox by joining the Neighbourhood Watch Newsletter.