Baron Samedi (French for “Saturday”) is more than just the face of a delicious spiced rum. He is a loa (the equivalent of a saint in Catholicism) from the Ghede family, the rulers of death and fertility. Baron Samedi is in charge of guarding the graveyards and welcoming the recently deceased into the afterlife. If family members want to contact their loved ones from beyond the grave, they’ll have to go through Baron Samedi, and bribe him with riches or rum. He’s often dressed in a top hat, a fancy purple suit and bone jewelry, with a skull painted on his face and speaks with a thick Creole accent. Because voodoo has been associated with black magic, Baron Samedi usually plays the role of the villain in motion pictures and television, either as a malevolent trickster god or at least, as a voodoo priest with a direct line to the other side.

Time and time again these representations prove it’s not a matter of “be careful what you wish for,” you should be careful of who is granting said wishes. With any luck, this list will convince you that Baron Samedi is overdue for his own movie, one in which he plays a deadly spirit like Candyman or Wishmaster, expanding the much-too-short catalogue of Black Horror. At the very least, this list will teach you a bit of French. Baron Samedi got his big cinematic debut in 1973 with Live and Let Die as one of the strangest Bond villains and probably the only supernatural character in the entire 007 franchise. Played by Geoffrey Holder– who doubled as the dance choreographer– Baron Samedi works for drug lord Dr. Kananga (Yaphet Kotto), who exploits the local people’s fear of voodoo to scare the authorities away from the poppy fields hidden behind Samedi’s base, on the fictional Carribean island of San Monique. Samedi is introduced as the “the Man Who Cannot Die.” When James Bond (Roger Moore) shoots him, he shatters into pieces, only to rise out of a grave seconds later, unharmed. Bond tries to kill him again by throwing him in a coffin full of poisonous snakes. That seems to do the trick, until we see Samedi laughing maniacally in the final shot of the film. 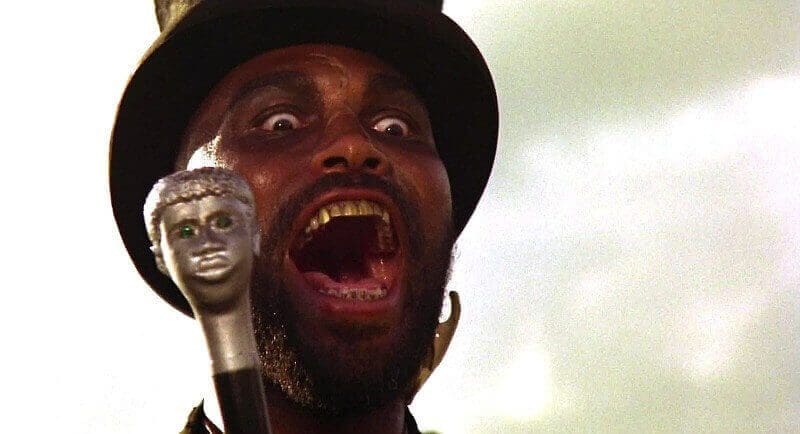 The following year, Baron Samedi appeared as an unambiguous deity in the blaxploitation horror Sugar Hill. Wanting to get revenge on the mob boss who killed her husband, Diana “Sugar” Hill (Marki Bey) seeks the help of a voodoo priestess deep in the Bayou. The priestess summons Baron Samedi (Don Pedro Colley), who grants Sugar control over his army of chrome-eyed zombies so she can massacre her enemies, in exchange for her wedding ring, and later, a human sacrifice.

8. THE PRINCESS AND THE FROG

In this jazz-tinged reimagining of the classic fairy tale the Princess and the Frog, horror legend Keith David provided the voice for Disney’s first Black villain, Doctor Facilier, a witch doctor in New Orleans who grants wishes…with a catch. He’s responsible for turning Prince Naveen into a helpless frog. His character is very much based on Baron Samedi; he has the top hat and the coattails, and a shadow with a mind of its own. Facilier is a mortal, but, as he explains through song, he has “friends on the other side.” Also, Disney villains have the best songs. Fight me! 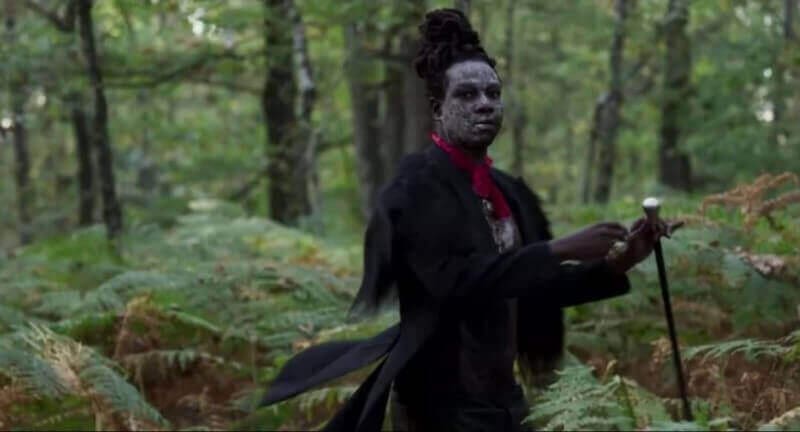 This 2019 French film Zombi Child follows Mélissa (Wislanda Louimat), a young girl who is relocated from Haiti to France after losing both her parents in the 2010 earthquake. She attends an upscale all-girls boarding school, where she joins a small sorority of white girls who have a simplistic understanding of voodoo (or as it’s known in Haiti, Vodou). One of her friends, Fanny (Louise Labeque) is devastated from a recent breakup, and, looking to rid herself of heartbreak, she visits Mélissa’s aunt Katy, who moonlights as a mambo (a Vodou priestess). At first Katy refuses to help her, but the overly dramatic Fanny offers her money and threatens to commit suicide, so Katy reluctantly performs the ritual. Fanny is accidentally possessed by Baron Samedi himself (Néhémy Pierre-Dahomey), in probably the most accurate cinematic portrayal of the loa for his nasally voice, foul mouth and love for debauchery. Moving onto television, ABC’s Once Upon A Time has two storylines going at the same time; one takes place in the modern world, the other in an alternate Magical Kingdom universe. Every character in the modern world has a backstory in the fantasy world. The seventh and final season brings in characters from Disney’s The Princess and the Frog, including a live-action Dr. Facilier (Daniel Francis). On top of his ability to transform people into frogs, Dr. Facilier can also teleport and heal. But get this! In the modern-day Hyperion Heights, his name is Baron Samdi, confirming the theory that Facilier is based on the god of death himself. In the fantasy police drama Grimm, the world is populated by mythological creatures—referred to as Wesens— disguised as humans. Baron Samedi (Reg E. Cathey) comes in near the end of Season 2. His secret form is that of a Cracher-Mortel (which roughly translates to “deadly spit”), a puffer fish creature with the ability of spewing a neurotoxin that turns his victims into zombies. His powers were inspired by an actual voodoo practice of extracting a toxin from a puffer fish and grinding it into a fine powder (Zombi Child’s opening scene shows this process in perfect detail). That powder can then be blown into someone’s face or sprinkled into their shoes, putting them into a death-like state. The victim will wake up days later, finding themselves in a coffin buried six feet deep. This is considered to be the origin for zombification. Deities from different creeds from around the world casually reside across the United States in the visually-stunning series American Gods. In Season 2, the recently resurrected Laura Moon (Emily Browning) travels to New Orleans in the hopes of reversing her decomposition. There, she is introduced to Baron Samedi (Mustafa Shakir) and his red-headed wife Maman Brigitte (Hani Furstenberg), the Vodou goddess of death. True to Vodou lore, Samedi is admittedly adulterous, yet he still has an undying love for his wife. He agrees to whip up a potion that will give Laura new life, but ever the trickster, what was supposed to be a simple exchange turns into a psychedelic orgy. In the sci-fi drama Heroes, the world is overrun with evolved humans with unique powers. Baron Samedi (Demetrius Grosse) is a warlord, part-time sex trafficker, and escaped convict from the maximum security prison for superpowered humans. Operating out of a jungle in Haiti, he has convinced the superstitious fighters in his faction– as well as himself– that he is the Vodou god of death because of his impenetrable skin. 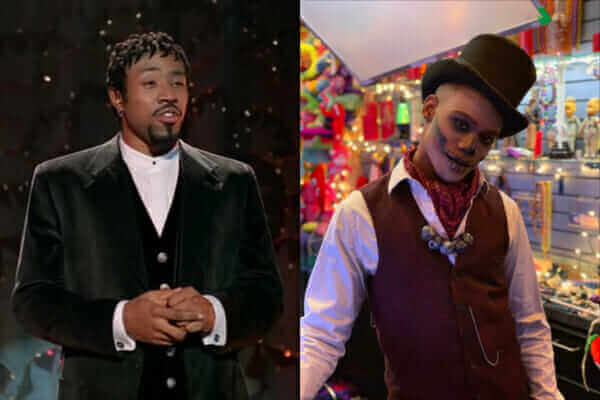 For almost every character created by DC, Marvel has introduced a similar version for their own universe, or vice versa. Both DC and Marvel have a villain based on Baron Samedi who has transitioned from the comic book pages to television, so I will count them as one. In the ‘90s sitcom-esque Lois & Clark, stage magician Baron Sunday (Cress Williams) torments Superman (Dean Cain) with nightmarish visions using voodoo dolls. In Marvel’s Cloak & Dagger, Samedi (Justin Sams) is more passive, acting as a guardian of the Dark Dimension, a realm between our world and the afterlife, which takes the form of a ghostly arcade. 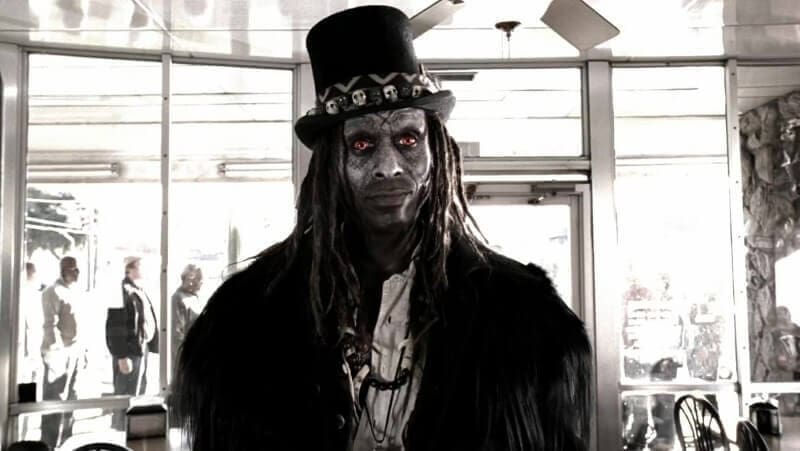 Technically, the Gatekeeper of the Spirit World in American Horror Story is Papa Legba (Lance Reddick), a different loa who acts as a communicator between humanity and the rest of the gods. But his appearance, mischievous behavior and fondness for cocaine is more akin to Baron Samedi than that of Papa Legba, who’s described as a benevolent old man with a straw hat and a pipe, and is usually in the company of dogs. Papa Legba first appears in AHS: Coven, but returns briefly in Apocalypse as well. He cuts a deal with Marie Laveau (Angela Bassett, based on the real-life Voodoo Queen of New Orleans), offering her immortality in exchange for an annual sacrifice of an innocent life.

In Part 4 of Chilling Adventures of Sabrina, Mambo Michelle Marie LeFleur (Skye Marshall) reveals her true identity is that of Baron Samedi. At the end of the episode “The Returned,” we see her transform into the loa, portrayed by Ron Selmour.

In video games, Baron Samedi is a playable character in the online battle arena game Smite, and can be unlocked for the multiplayer mode in GoldenEye 007 on Nintendo 64. He also appears in World of Warcraft, under the name Bwonsamdi.

Last year, British comedy show The Mighty Boosh was pulled from Netflix for Noel Fielding’s use of blackface to portray the Spirit of Jazz, based on Baron Samedi.

For more Horror Top Tens, make sure you’re following us on Twitter, Reddit, or in the Horror Movie Fiend Club on Facebook! And for all the best horror discussion you can find online, stay tuned to Nightmare on Film Street.