[Cinepocalypse 2019 Review] Who Cares About JURASSIC PARK When There’s TAMMY AND THE T-REX! 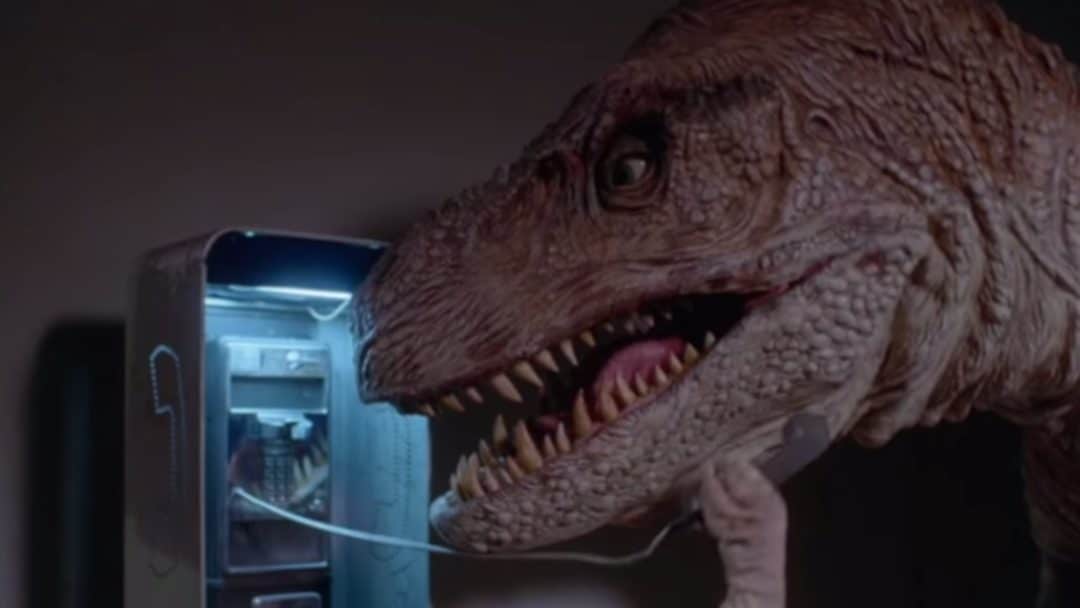 The ground rumbles. Glasses shake. People look up, confused. Someone mutters, “it could be a dinosaur.” No, this is not the iconic reveal of the T-Rex in Steven Spielberg’s Jurassic Park. This is a party scene in Stewart Raffill’s 1994 masterpiece, Tammy And The T-Rex. As part of this year’s Cinepocalypse, the 35mm gore cut of the film was shown for the first AND last time. It is a campy and ridiculous experience where Paul Walker’s brain is put into a giant animatronic T-Rex. Yes, the late Paul Walker stars in this film, alongside a young Denise Richards as the titular Tammy.

But let’s back up. Tammy And The T-Rex opens like any other 90s teen comedy: with girls at dance practice. The camera focuses especially on our Tammy until her dreamy 90s boyfriend, complete with cropped sweatshirt, Michael (played by dreamboat Paul Walker, may he rest in peace). They are the Hollywood picture of teen romance. But of course nothing is perfect and our first conflict is introduced: Tammy has a terrible ex-boyfriend, Billy (George Pilgrim), who was apparently in prison and likes to beat the hell out of high schoolers. They fight in the schoolyard over a screaming Tammy, who just wants Billy to leave Michael alone! This rivalry leads to Billy capturing Michael and depositing him in a wildlife park. Billy leaves him there to be mauled by the big cats that roam the park. Why are these cats just openly roaming a park near a town? Great question, but don’t worry about it. Michael is rendered comatose after a lion attack. High school sucks, am I right? You may be asking, but where is the dinosaur? Don’t worry, he’s about to enter the picture. We move from the idyllic high school setting to a dark lab, where mad scientist, Dr. Wachenstein (Terry Kiser, Friday the 13th VII), and his voluptuous sidekick, Helga (Ellen Durbin, Napoleon Dynamite), are testing their latest project: a sentient T-Rex. At first, the dinosaur is powered by a computer. But, a computer-powered dino isn’t enough—the T-Rex must have a human brain so he can operate on his own. But where do they get the brain? Why, a comatose Michael of course. In a delightfully disgusting scene, Dr. Wachenstein removes his brain and deposits it into the massive dino. To everyone’s surprise, except the audience’s, Michael’s consciousness takes control of the giant dinosaur and his revenge and love fueled rampage begins. Not even a mad scientist and a T-Rex body can stop true love.

The animatronic T-Rex can really do it all. Its eyes move, it can roar, it can move whatever the dino-equivalent of lips are. Pair that with moments of its small arms making calls on a pay phone, crying at a funeral, and spooning Tammy, you’ve essentially got a gigantic scaly human. Raffill apparently got the T-Rex from a man in South America who owned movie theatres. They had the creature for a very brief period of time so Raffill wrote the story in a week. Sometimes all you need is a giant fake dinosaur to inspire the greatest story of all time. The gore cut showcases the phenomenal use of practical effects, from ripping off heads to tearing holes in teenage bullies. My favorite moment is when Dr. Wachenstein and Helga discover their flattened henchman, who looks like a Paleolithic pancake, and they start rolling him up like a rug. It’s so nonchalant and done like it’s just a normal part of the day. Strange, disgusting, hilarious, which really can be used to describe every kill in Tammy and the T-Rex. Every kill warrants loud cheers and triumphant claps because this T-Rex doesn’t just kill anyone; he only kills those who have wronged him and those he loves, sort of like a prehistoric Dexter without the plastic covered kill room.

The film shows its age in its joke writing, which often relies on gay jokes, using the f-slur, and just a plethora of body comedy. Yet Raffill attempts to use these jokes to play up the film’s camp aspects and make every character an absolute caricature, from pretty high school girl to idiot small town cop. That doesn’t keep you from squirming in your seat, though, especially with Teo Forsett’s character, Byron, who is both the token minority character and the sassy gay best friend. It’s a strange situation where yes, it is nice to see a black gay character playing a big role in a comedy, but he also serves as the punchline for many of the film’s jokes. Everything about this film is outlandish but that’s what makes it fun. Why did they put his brain into a giant robotic T-Rex instead of literally anything else? Did Tammy really have sex with a dinosaur? Why was Billy in prison? Demanding answers from this film is folly; this is not a film that wants to give answers, only a bizarre love story between girl and dino. It has quite a simple message: get you someone who looks at you the way a giant animatronic T-Rex looks at Tammy.

They teased a Blu-ray release before the 2019 Cinepocalypse screening but no date has been announced yet. Have you ever seen Tammy And The T-Rex? What did you think? Let us know on Twitter, Reddit, and in the Horror Movie Fiend Club on Facebook!

TLDR Demanding answers from this film is folly; this is not a film that wants to give answers, only a bizarre love story between girl and dino. It has quite a simple message: get you someone who looks at you the way a giant animatronic T-Rex looks at Tammy.