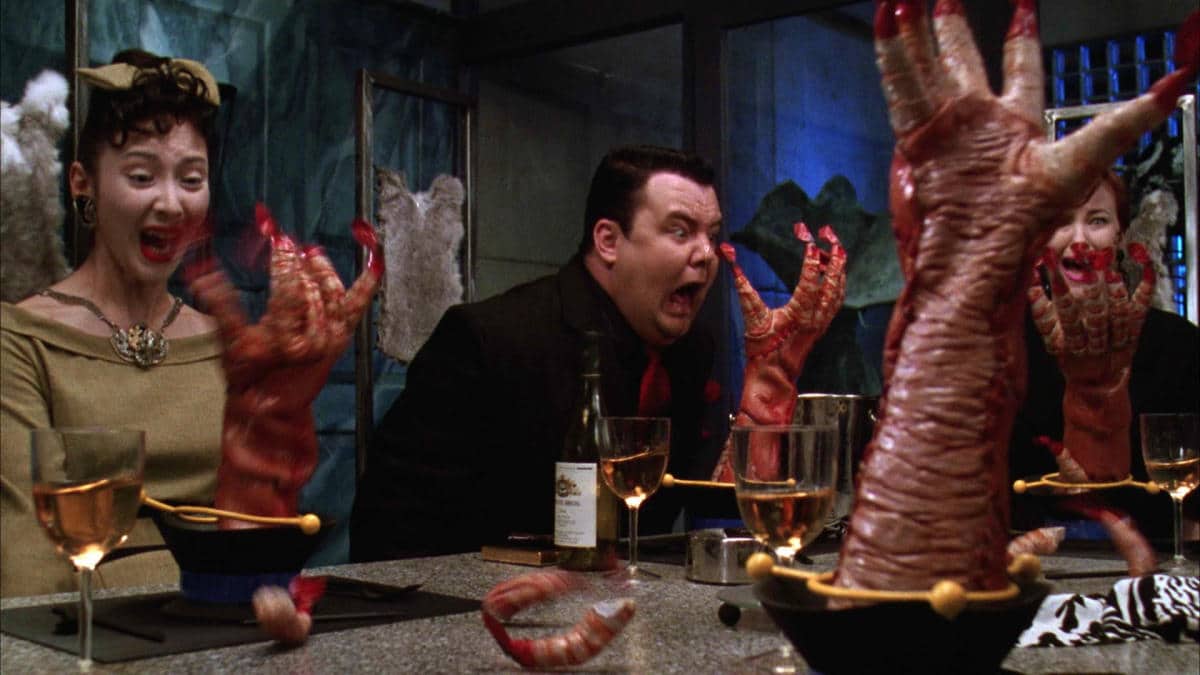 Dead Before Dessert: 10 Iconic Dinner Scenes In Horror To Get You Through Thanksgiving

Whether you’re hosting a Friendsgiving, going home for the holidays, or flying solo with a tofurky loaf, there is always a lot of pressure to make your Thanksgiving dinner the best meal of the year. And sometimes that pressure can get to you. So before you start throwing mashed potatoes across the table at your opinionated uncle, or you cry into a glass of wine because you burned dessert, let’s all take a minute to remember that a lot of horror movie characters over the years have met fates much worse around the dinner table.

As anyone unfortunate enough to find themselves on this list will tell you, home is where the horror is. This year, let’s give thanks that we aren’t any of the poor souls featured below. Whether you need to blow off a little steam or remind yourself that things could always be worse, here are 10 Iconic Dinners in Horror to help get you through this gastronomic holiday.

There are plenty of lists of horror films with great dinner scenes on the internet, but I am amazed that none talk about this scene from Pan’s Labyrinth. More recognizable than Pan himself, The Pale Man (played by Doug Jones), with his long blackened fingers and eyeballs in the palms of his hands, makes a lasting impression.  You can watch this one scene and understand the premise of the entire film. A girl is in a monster’s lair, she is given rules that she isn’t able to follow because she’s just a kid and when the rules are broken, she pays for it heavily. The tension of this scene is so well executed that even with the sound off, you can feel your stomach knot watching Ophelia (Ivana Baquero) navigate around the sleeping monster.

How are those Maggots? – The Lost Boys

Probably one of the best vampire movies ever made, and a personal favorite of mine, The Lost Boys offers much to be thankful for. When brothers Michael (Jason Patric) and Sam (Corey Haim) move from Arizona to a small California beach town crawling with vampires, it’s only a matter of time before one of them is recruited. When Michael gets involved with the leather-clad gang of vamps and is lured to their lair (a literal cave) his fate is sealed over dinner. He is mesmerized into believing that his mind is playing tricks on him when he is offered a box of Chinese takeout and sees maggots where rice should be. I’m sure if you’ve seen The Lost Boys, even once, you can close your eyes and hear Keifer Sutherland’s taunts clear as day. You’re eating maggots, Michael. How do they taste? 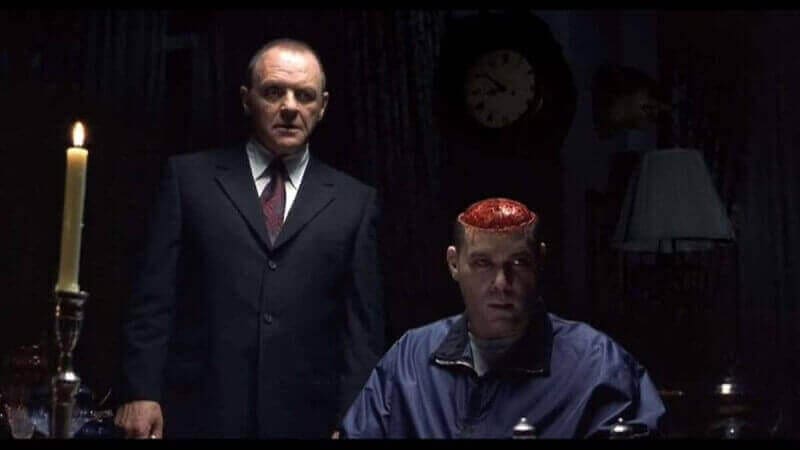 I wouldn’t call Hannibal the best installment of this franchise, but if there is one thing you’ll remember about this movie it’s poor Paul (Ray Liotta) and his last meal. Set after the events of The Silence of the Lambs, Ridley Scott’s Hannibal focuses on Agent Clarice Starling’s (played here by Julianne Moore) attempt to capture Hannibal “The Cannibal” Lecter (Anthony Hopkins). In this wild scene, Clarice is being held captive by Lecter and wakes up to find herself in a cocktail dress. Upon entering a dining while looking for answers, she finds Lecter with a drugged FBI agent that has been antagonizing Clarice the entire film. Lecter is preparing food tableside when the menu is promptly revealed to be the fellow agent. Guess who’s eating first?

I was on Roswell – Coherence 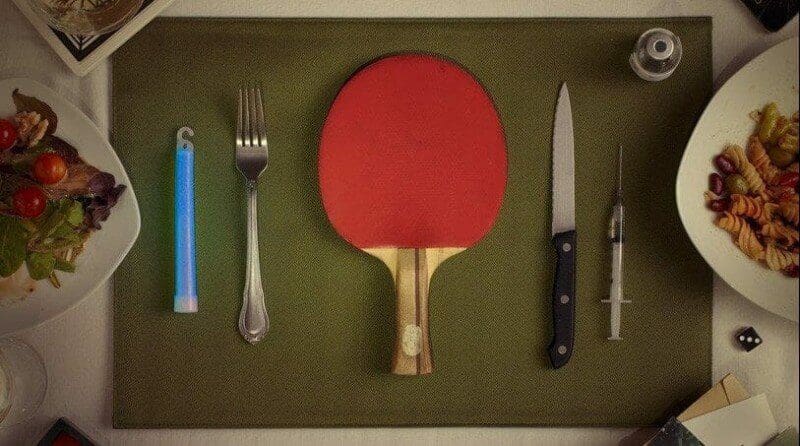 This may be a cop-out since the entire film takes place during a dinner party, but, it’s a low-budget masterpiece that you can almost always find streaming for free on Tubi. The film is based on the idea of a convergence of parallel universes that happens one night as a comet passes over Northern California where the characters are having a dinner party. The scene in question not only breaks this down in a solid way with very organic dialogue but it doubles down when a character played by Nicholas Brendan (who very famously played Xander on Buffy from 1997-2003) introduces himself as an actor from the series Roswell. The person he is speaking to, a new addition to the friend group, exclaims that she loves Roswell but doesn’t recognize him at all. When the other friends explain that he was in the main cast for the entire run of the show, we have our first clue that we may already be in the wrong place. It’s a fun joke for the knowing audience and it’s a great plot point for the viewer to stew over.

The Platform is an amazing after-dinner watch if you constantly find yourself in arguments with your politically-charged relatives while passing the cranberry sauce. A dystopian thriller set within a vertical prison tower that feeds the inhabitants via a platform covered in containers of food. The platform is lowered, floor by floor, only long enough for the two people on each floor to eat what they can before the platform continues to the floor below. It’s obvious immediately that there is not enough food for every floor and the horror lies in what the inhabitants resort to when the food runs out. The scene I find hardest to watch is the one where a woman and her small dog enter the prison and attempts to inspire altruism in the prisoners below… 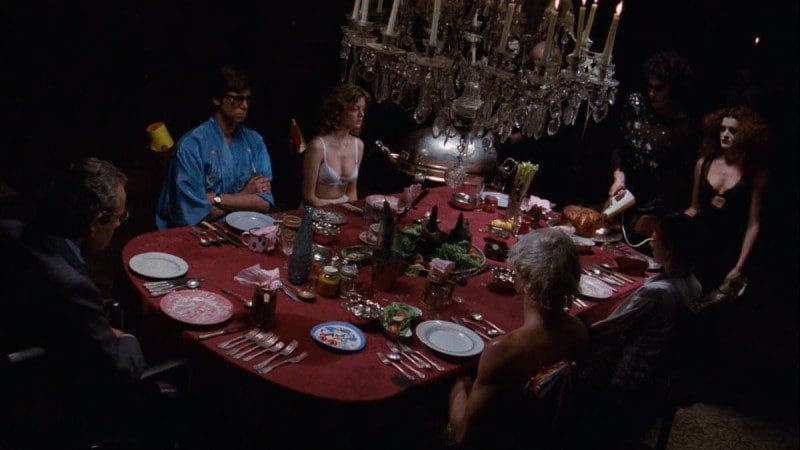 The Rocky Horror Picture Show is a cult classic for a reason. A chaotic mess from start to finish, the film has so much to offer that you can sit, or dance through it. A spoof on Mary Shelley’s Frankenstein and the campy pulp films of the 1950s, The Rocky Horror Picture Show follows a newly engaged couple whose car troubles lead them to the house of a mad scientist. Dr. Frankenfurter (Tim Curry) a self-proclaimed sweet transvestite from Transylvania, has a habit of building men. The newest to be born is Rocky (Peter Hinwood), a blonde Adonis who was made to replace Frankenfurter’s previous obsession Eddie (Meat Loaf). Later that night, at a dinner party thrown for Rocky’s “Birthday,” Frankenfurter opens the top of the table to reveal that the meal on everyone’s plate is the late Eddie! Cue the hysterics.

Dinner’s Over – You’re Next You’re Next was the sleeper hit that no one expected. All hell breaks loose during a family dinner that gets interrupted by home invaders with crossbows. When Erin (Sharni Vinson), a student tagging along to her boyfriend’s family gathering, turns out to be a masterful survivalist, the characters behind the attack are forced to improvise. Erin’s skill at laying traps, self-defense, and overall level-headedness is an exemplary addition to the list of quintessential final girls. You’re Next is a thrill ride from start to finish and a great choice to help you fight off the tryptophan-induced slumber. 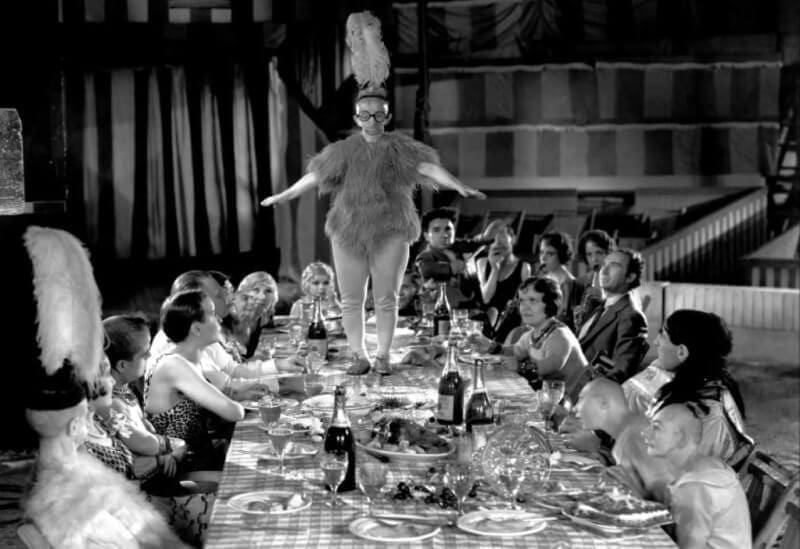 Another seminal scene that isn’t recognized enough. Tod Browning’s Freaks (1932) is one of the earliest examples of a horror film highlighting an under-represented demographic. Set in the world of circus side shows, Freaks follows a group of performers and an interloper with terrible intentions. When “normal” trapeze artist Cleopatra (Olga Baclanova) concocts a plan to marry and kill Hans (Harry Earles), a little person and lead circus performer, she soon finds out she has crossed a loyal group of friends who will stop at nothing to make her pay.

The dinner scene, which happens to be Cleopatra and Hans‘ wedding reception, is the turning point of the film. As the performers are gathered around the table, they begin to chant a song of acceptance, declaring Cleopatra as one of their own. Cleopatra’s amusement turns sour when her vanity overcomes her and she has a violent and offensive outburst. Her fear of being a “freak” consumes her, and it’s not long after that the plan starts to unravel…

Feast of the May Queen – Midsommar If you’ve seen the movie, you know there are so many meals to choose from for this list. But, it seems obvious to me that the one with the highest stakes is the feast that happens after Dani (Florence Pugh) is crowned May Queen. I have heard so many takes on the ending of this film- all of them are valid. But, it wasn’t until forcing my mother to watch this and hearing her perspective that I realized how much was happening in this scene. My first reaction to the film was the same as other horror fans. I was team Dani and I was living for the “good for her” ending.

My mother offered a different take. She suggested that Dani and her boyfriend, Christian (Jack Reynor), were equally indecisive and lost. They are both taken in by The Horga community to become permanent parts of it for better or worse. Dani is potentially a full-fledged member of the cult. Christian, as a chosen mate who would sire a child of The Horga. Both become completely enveloped. It’s in this scene where they are finally separated for the last time and passively accept their fate (for better or worse) that this take makes the most sense. That is the fun of watching “elevated horror.” You see new things every time. 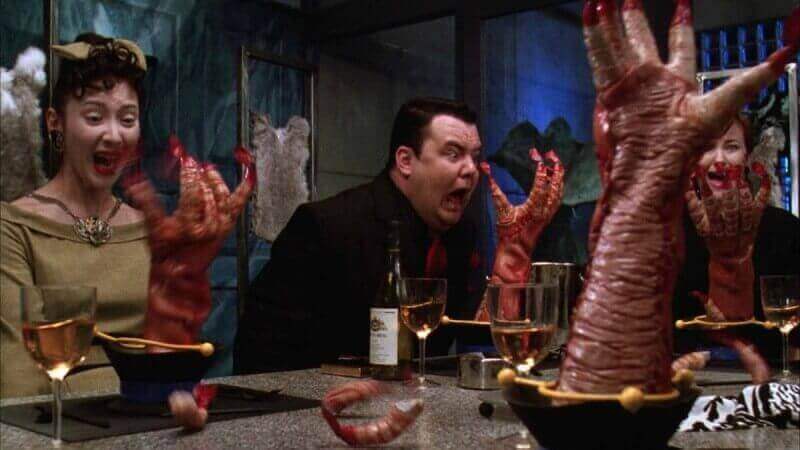 The perfect movie to officially say goodbye to the spooky season, and family-friendly enough to put on for the whole gathering. When the ghosts that haunt a country home are intruded upon by the new family that lives there, they must enlist the help of the dangerous poltergeist, Beetlejuice. During a dinner party thrown by the new family, the hosts and guests are targeted in an attack that causes everyone to break out in hysterical song and dance. The scene is one of the most impressive and recognizable in the film, relying heavily on practical effects and the physical comedy of the entire cast. A must-see if it has somehow eluded you up to this point. The dinner scene in Beetlejuice is arguably one of the most iconic on the list.

Honorable Mentions for The Sawyer’s Home Cookin’ in The Texas Chain Saw Massacre (1974) and Kane’s recovery dinner in Alien (1979). That last scene usually goes by a different name, and I know it deserves a spot on this list, but I would never risk ruining this moment for anyone.

What’s your favorite dinner scene in Horror? Share your picks and your personal Thanksgiving horror stories with us over on Twitter or in the Nightmare on Film Street Discord! Not a social media fan? Get more horror delivered straight to your inbox by joining the Neighbourhood Watch Newsletter. 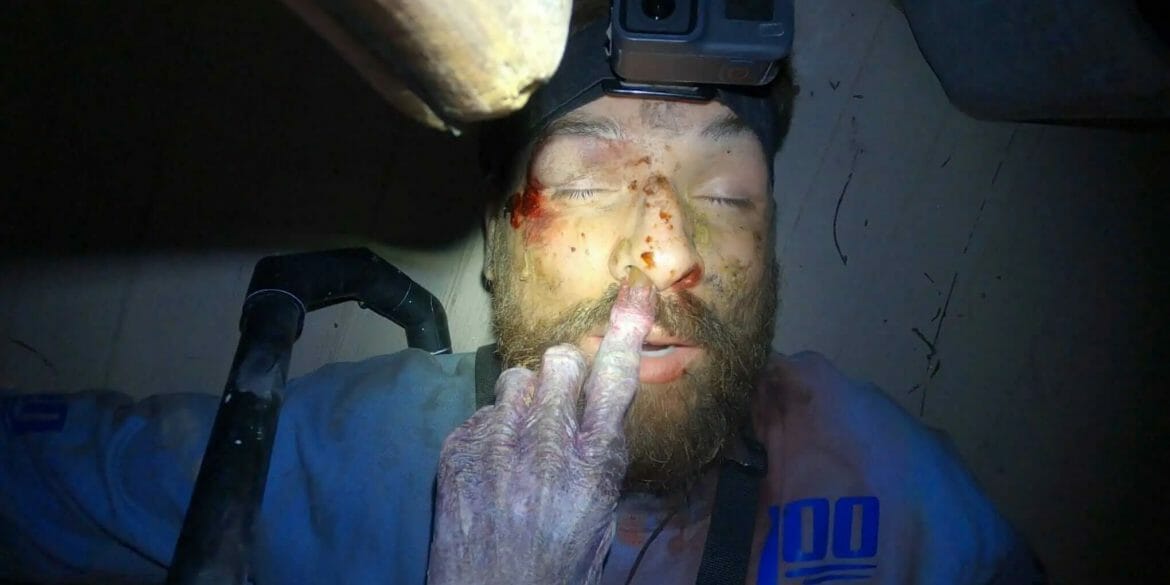