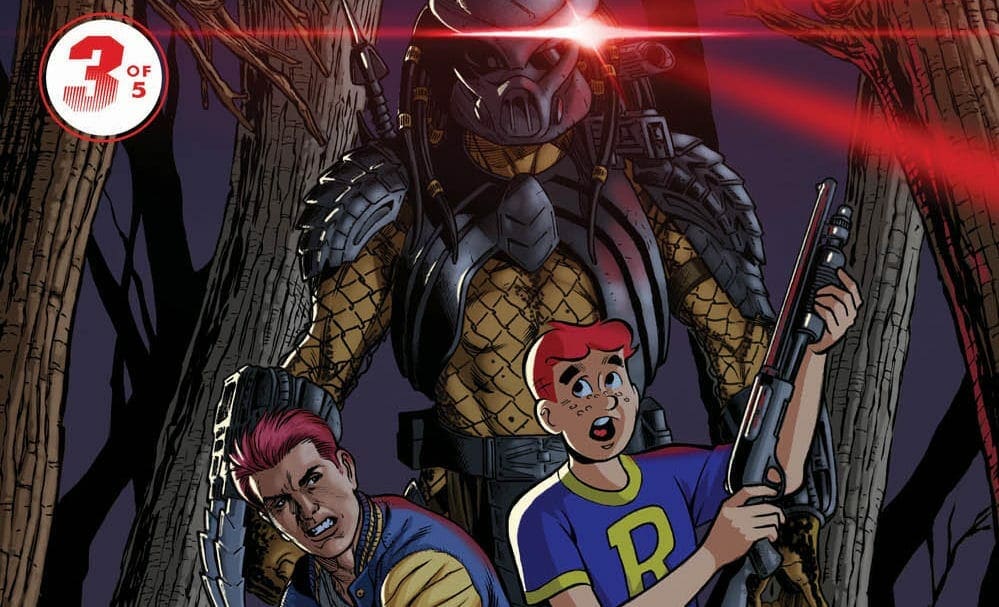 Comic book stores across the US will see a triumphant return this Wednesday, courtesy of Dark Horse and Archie Comics. Archie vs. Predator II, a sequel to the publishers’ combo sci-fi horror-comedy from 2015, is hitting shelves that day, and in it is the work of an artist as legendary as the series itself. Robert Hack made Archie history in 2014 as the artist behind the unforgettable Chilling Adventures of Sabrina. Currently, you can see his designs in the opening credits of the Netflix series of the same name. I got to talk to Robert about his experience with at Archie Comics, his creative process going into Archie vs. Predator II, and his time drawing everybody’s favorite Teenage Witch. Here’s what he had to say. Grant DeArmitt for Nightmare on Film Street: Starting at the beginning; when did Archie Comics approach you about doing Archie Vs. Predator II? What was your reaction?

Robert Hack: Alex Segura shot me an email late last year, floating the idea of a crossover. I loved the original AvP, and was hesitant to follow in the footsteps of something so great, but since that is a terrible reason not to do something awesome, I said yes. And I’m glad I did, because the book is brilliant and now I don’t have to live with a lifetime of regrets. Well, not for this, anyway.

NOFS: You’re already a legend in the Archie Horror world, having brought us the iconic art in Chilling Adventures of Sabrina. What would you say is the biggest difference between your work on CAOS vs. your work on AvP2?

RH: There is a pretty big difference on my end of things. I’m not coloring AvP2. The decision was made early on to bring in another colorist to make the book visually different from CAOS. That let me play around with some ink and tone techniques that I can’t do when I paint my CAOS pages. And Kelly Fitzpatrick is doing a brilliant job coloring it all.

NOFS: Speaking of Sabrina, the Teenage Witch made an appearance in the first Archie vs. Predator, though it…didn’t go great for her. But since Sabrina has a tendency to bounce back from unfortunate circumstances, will we see her again in AvP2?

RH: No Sabrina appearance, but Sabrina isn’t the only magical character in the Archieverse… I know this is print, but you’ll have to trust that I am making a sly wink while I answer.

NOFS: Back to AvP2, I’ve read that you like to fuse horror and humor in the books you draw. In fact, you even like taking those elements “too far.” Where did you find the humor in this project? And without spoiling anything, how do you take it “too far?”

RH: The humor is all over this book, inseparable from the horror. Alex de Campi has, as always, done a fantastic job fusing both elements. For me, this goes back to my teenage years reading EC Comics reprints, and wanting to make comics that are as darkly funny. And “too far” is subjective, but for me, it’s about not setting my own definition of what “too far” is. I don’t want to water down a good idea/visual based one how I assume editors or readers might respond. This stems from a conversation I had with Archie Co-President Mike Pellerito pre-CAOS. He said “Your job is not to decide where the line is. You go as far as you want and we’ll tell you when you’ve crossed it.” Which is the best thing in the world to hear before you start a horror comic, and something I have absolutely taken to heart.

NOFS: For this series you’re teaming up with the original Archie vs. Predator writer Alex de Campi and Archie Comics staple colorist Kelly Fitzpatrick. What’s working with them like? In your opinion, what’s the best thing they respectively bring to this project?

RH: I’ve worked with both Alex and Kelly on other books and it’s always a privilege to do so. Alex fills scripts with brilliant concepts, fearlessly told. We had been talking about doing a big project together for a while, and I’m glad we finally landed on this. Kelly is phenomenal. I love her colors. She makes my scribbles shine and I can’t thank her enough. NOFS: Though AvP might be the craziest comic book mashup between Archie characters and other companies’, it’s far from the only one. Red Sonja and Vampirella Meet Betty and Veronica comes to mind, as well as Archie Meets Batman ’66. In your opinion, why are other comics so eager to head to the Town with Pep?

RH: I think it all stems from a visceral reaction. One very familiar to every one of us. Editors and publishers and licensors are fans at heart. So when these crossovers are brought up, their reactions are our reactions: “OMG, WTF? Archie vs. Sharknado? Archie vs. Predator? That’s the craziest/coolest thing I’ve ever heard. And we’re just lucky that they’re in a position to greenlight this wonderful madness.

NOFS: After checking out this book, there are bound to be some new readers who want to see more of your work. What would you point them toward if they liked the AvP series?

RH: Chilling Adventures of Sabrina would be a good start. And if you like covers, I’ve done a LOT of them. A few hundred, I believe.

NOFS: Alright, last question, I promise: Who wins in a fight between AvP‘s Predator and CAOS‘s Madam Satan?

RH: Fight? I don’t think they’d fight. But their children would be a force to be reckoned with.

For more Archie vs. Predator madness, make sure to check out NOFS’s exclusive look at art from Archie vs. Predator II Issue Three. Then tomorrow, I’m going to be posting a review of AvP2 Issue One. You can read it here, and grab a copy at your local comic book store on Wednesday, July 24th.

Keep an eye out for that review and all NOFS has to offer by following us on Facebook, Instagram, and Twitter. It’s the best horror community on the web, and we really think you should join ussssss. And as always, for all your horror movie news, reviews, and interviews, keep lurking at Nightmare on Film Street.