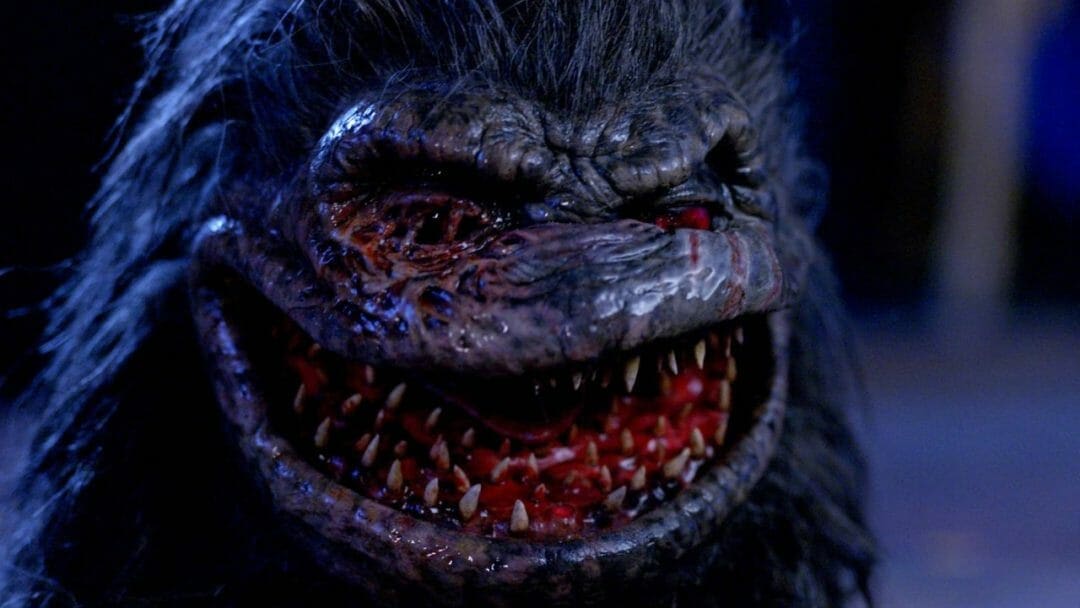 Now, that practically every ‘80s horror franchise has had a comeback, it was only a matter of time before the Critters returned.

It’s been 27 years since Critters 4, though the webseries Critters: A New Binge was released on Shudder earlier this year, so the timing was perfect. The newest installment, Critters Attack, is directed by Bobby Miller, and written by Scott Lobdel, who wrote Happy Death Day and its sequel. The film was produced by Syfy and will be broadcast on the channel later this year.

In Critter’s Attack, the Krites, a furry carnivorous alien race, have crash-landed on earth once again, and are attacking unsuspecting townsfolk who venture too deep into the woods (though they somewhat deserve to be eaten; if you hear a strange noise nearby and see glowing red eyes in the dark, why would you go towards that?). Although there were only a few Krites in the small spacecraft, they multiply at an alarming rate by laying their offspring in the corpses of their victims.

Meanwhile, sushi delivery girl Drea (Tashiana Washington) is feeling down after being rejected from her dream college for the second time. Hoping to get an in with admissions, she agrees to babysit a professor’s kids. The eldest daughter, Trissy (Ava Preston), is a nature enthusiast, while her nine-year-old brother Jake (Jack Fulton) can only communicate through texting on his phone. Drea also drags along her preteen brother Phillip (Jaeden Noel), who is obsessed with the existence of aliens, especially after seeing what he believes to be two UFOs fly over their house the night before. Drea suggests the four of them go hiking in the woods. While on their excursion, Trissy discovers a white-haired Krite, which she mistakes for a wounded animal. She names the cute creature Bianca. Unlike her male counterparts, Bianca is docile and friendly with humans, even if she does have rows of sharp teeth. She’s to the Krites as Gizmo is to the rest of the Gremlins (further reinforcing the fact that one furry creature is a knock-off of the other). But Drea and company will soon find out that wherever Bianca goes, the hungry Krites are soon to follow en masse.

The movie is aware of its legacy and embraces is campy origins. It plays up the comedy with a small cast of eccentric characters, who are briefly introduced before they are devoured alive. Without the smartphones, it could very well be an ‘80s movie with its synth-rock score and use of puppets and animatronics. Background extras have to sell the chaos when their wrestling large a mass of fur biting onto their necks or gnawing at their legs. I can also imagine stagehands rolling the Krites like bowling balls from off-camera.

“Their mission was fairly clear: eat everyone.”

There’s a few things that set Critters Attack! apart from its previous installments. First, there was a lot of buzz about its R-rating, the first film in the franchise to be slapped with such a rating. I can tell a few extra buckets of red corn syrup were needed, but still, I didn’t find the gore as excessive as I had hoped, even when the Krites explode in a mess of green goop. The look of the Krites is grittier, some have scars around their eyes and while others have receding hairlines. There weren’t any subtitles attached to the Krites’ language. Their mission was fairly clear: eat everyone. No other alien species are involved in the invasion, nor are there any shots set in outer space. In fact, there’s very little CGI throughout the film. It could be due to its TV-movie budget.

Fans of the franchise will be delighted to see the return of Dee Wallace, who played Helen Brown in the original Critters. In this one, she plays Aunt Dee, a bounty hunter who has been preparing in the case of a Krite invasion. She’s armed to the teeth with futuristic technology and is always hot on the heels of the protagonists. She occupies the role held by the shape-shifting Nothing-Face alien hunters of the originals. Wallace has mentioned in an interview that considers Aunt Dee to be the same character she played in 1986 original, but after encountering the Krites the first time, she changed her identity and became a badass in order to save the planet.

The script attempts to make the characters relatable and gives Drea a tragic backstory. But it’s hard to feel any attachment to the human characters, because the audience won’t be watching for them — they’ll be watching to see the little monsters in action. Fortunately, they are given a sufficient amount of screen time to keep the audience satisfied.

“[Critter’s Attack is] chock-full of giggly moments and cheesy eye-rollers..”

Overall, Critters Attack! is a very fun movie and a Krite-filled delight! It might not have the big budget of its predecessors, but if anything, it keeps the plot simple. There’s no need to be familiar with the lore or to have seen all four of the previous films. Despite the film’s mature rating, it still feels like it geared towards a younger audience. It’s chock-full of giggly moments and cheesy eye-rollers, with no actual scares.

Critters Attack! had its World Premiere at the Fantasia Film Festival on Saturday, July 13th. It will be released on Blu-Ray, DVD and digital platforms on July 23rd, and will be broadcasted on Syfy in October. The Fantasia Film Festival runs until August 1, 2019 in beautiful Montreal, Canada. Click HERE to check out all of our continued coverage of the festival, and be sure to follow us on Twitter, Instagram, and Facebook to see silly photos, immediate film reactions, and the occasional photo of lunch. TLDR Overall, Critters Attack! is a very fun movie and a krite-filled delight. It might not have the big budget of its predecessors, but if anything, it keeps the plot simple. There’s no need to be familiar with the lore or to have seen all four of the previous films. Despite the film's mature rating, it still feels like it geared towards a younger audience. It’s chock-full of giggly moments and cheesy eye-rollers, with no actual scares.