Plague doctors are due for a resurgence. And no, I’m not saying that because we’re six months into the pandemic of 2020, and I, a horror fan, am hungry for some timely, relevant content. I’m saying it because I, a horror fan, think the skeletal crow-like beak is an underutilized silhouette in period horror, and we really need to do away with the deer antlers. They’ve been done to death.

Neil Marshall’s The Reckoning promised something new. Stills shot down damp, dark alleys with those very masks staring blankly at as, like we’ve loitered in town too late one night in 1665. It’s serendipitous almost, that a period film, shot before 2020’s covid-tainted reality, would so perfectly mirror the world of our own. But The Reckoning in the The Reckoning isn’t just from pestilence. Pandemic is only the setting. The ground that sews suspicion, false convictions, and an ‘every man for himself mentality’, while society crumbles.

Still, serendipitious. Turmoil is part of our daily lives in 2020. We don’t all toil on farmland, but we’re learning now more than ever just how gullible and suspicious we are. How quickly our societal walls crumble when something dare challenge the status quo.

The Reckoning has the audience at its side. While we’re bearing the bitter fruit of our ‘cream-rises-to-the-top‘ capitalist society, we’re watching a woman, falsely accused, navigate a chaotic world hungry for someone to blame. Someone to punish. Someone to hunt.

It’s serendipitious. But still, an accident.

Grace Haverstock (Charlotte Kirk) is left alone with a new baby and a farmstead after her husband succumbs to a plague ravaging its way through England. After she violently denies her landlord, Squire Pendleton’s (Steven Waddington) brute proposition of alternate means to pay her debts, he takes the opportunity to add Grace’s name atop the ‘Suspected Witches’ list. And with townsfolk dying in the streets due to an unknown disease, they’re more than eager to point fingers and catch the culprit. Any culprit.

Enter Britain’s renowned Witchfinder (Sean Pertwee), who uses an archaic arsenal (though I guess novel for 1665), of divine torture devices to break Grace and ultimately get her to confess. Even though, everyone kinda knows she’s condemned to death anyways.. so a prolonged battle of wits it is!

“When you finally realize The Reckoning is a torches-held-high, pitchfork shaking witchhunt, you’re well into the film already.”

When you finally realize The Reckoning is a torches-held-high, pitchfork shaking witchhunt, you’re well into the film already. It’s a slow starter, a film eager to paint our heroin Grace in grim candelight before tossing her in a prison cell. When ‘Day 1’ of torture begins, marked by a chapter title no less, we’ve already sat through at least 30 minutes of setup. Plague worries have come and gone in favor of ghostly visits from husbands, melancholic seed planting, and Grace looking pretty alright for herself in her ‘going into town’ hat.

If a witchunt is what warrants, a witchhunt it shall be. But our characers, particularly the villains, are so one-note that the torture scenes are bland and hollow. Squire Pendleton floats about the background while the ‘Becky with the Good Lord’ Witchfinder gets all the good speeches. His assistant Ursula (Suzanne Magowan), has the honor of delivering the punishments. And if her allover 3rd degree burns and Stockholm-Syndromy presence don’t quite do it for you, don’t worry she gets a needless flashback, too. After each day of punishment, Grace is tossed back to her prison-cell; a setpiece so overused that when the Devil (Ian Whyte) finally makes an appearance (or does he..), we hope she’ll make a deal with him just to take us all out of there.

“Devil finally makes an appearance, we hope she’ll make a deal with him just to take us all out of there. “

Grace is lovely throughout, but there is no connection to the character, and her journey from punished to punisher becomes tiresome.  I’m not sure what our barrier is to connecting with her plight — all of the correct strings are pulled and plucked. Visions of her dead husband and mother. Her baby torn from her arms. Backstabbed by her friends, neighbours, and landlord. Sad Stuff. Is it because her foes aren’t an equal match? Or because the film never dares go deeper than surface level, keeping all of our characters at arms length, unsure how to make any of them step out of line of what’s to be expected or anticipated?

The Reckoning is a timely tale that uses hot trends to serve a cool platter. Period, Folk Horror and Witchcraft are absolute sells, but the film doesn’t actually take us down any dark, unexplored alleys. It gives us the Coles Notes and calls it a day.

The Reckoning celebrated a “Special Advanced Screening” at Fantasia Fest 2020. Want to read more of our coverage from Fantasia? Of course you do! As always, sound off on your thoughts on this review and chat with our community of horror fans on Twitter, Facebook, and Reddit! 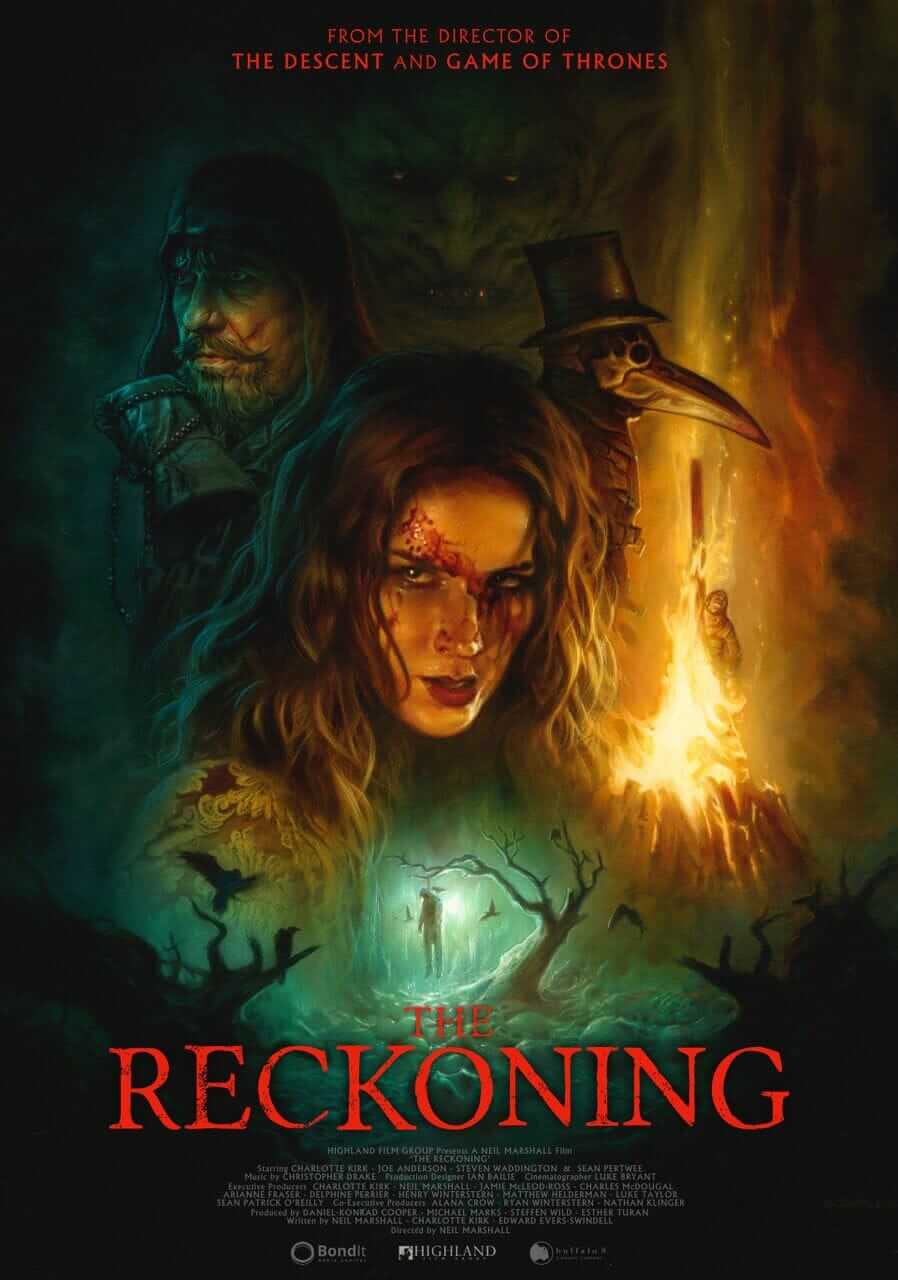 Review: THE RECKONING (2020)
TLDR
The Reckoning is a timely tale that uses hot trends to serve a cool platter. Period/Folk Horror and Witchcraft are absolute sells, but the film doesn't take us down any of the dark unexplored alleys. It gives us the Coles Notes and calls it a day.
Premise
98
Plot
55
Characters
30
Practical Effects
70
63