[#Fantasia2022 Review] WHAT TO DO WITH THE DEAD KAIJU? Is Pure Political Satire…But With Zero Monster Action

In 2018, while visiting the Fantasia Film Festival in Montreal for the world premiere of his movie LOUDER! Can’t Hear What You’re Singin’, Wimp!, Japanese filmmaker Satoshi Miki said in an interview that his dream project would be to set a movie in the aftermath of a kaiju attack and that the story would follow the painstaking process of properly disposing of the monster’s carcass. A few years and a global pandemic later, his dream has become reality with What To Do With the Dead Kaiju?

According to Satoshi Miki, who wrote and directed the movie, there were two kinds of reactions when it premiered in Japan: some laughter, but mostly anger, primarily from kaiju fans who were not pleased with this subversion of their favorite subgenre. But how would an audience on the other side of the world receive it?

Japan is celebrating after a giant monster attack on Tokyo has come to a sudden end. The monster (which looks like a generic brand Godzilla) seemed unstoppable, unhurt by everything the military threw at it. But just when it seemed as if all hope was lost, there was a blinding flash of light around the monster, and when it cleared, the monster was stone cold dead, its feet up in the air and a giant gash running down its side. Nobody knows where the light came from. The prime minister (Toshiyuki Nishida) chalks it up to divine intervention, while others speculate it was a freak occurrence. Regardless, the remaining question is, what to do with the dead kaiju?

The army sets up a 15-kilometer perimeter around the monster until it is deemed safe while government officials argue amongst themselves over whose department should be responsible for dealing with the kaiju. Should the minister of the environment take care of it? Or is it more of a public health issue? Should the corpse be preserved or disposed of? Researchers conclude that the kaiju did not die from disease, nor is it radioactive from the blast of light.

Initial plans are put in place to keep it where it is and use it to bring in tourism to make up for all the government funding that went to the military during the attack. However, research teams have noticed giant blisters forming along the monster’s body. The sores expand like giant balloons, filling up with foul-smelling gas. If the corpse continues to bloat, it’s possible that it might explode, destroying Japan along with it. The situation becomes a race against time trying to figure out how to properly vent the gas out of the blisters before it’s too late.

Every time I put on a classic kaiju movie, I forget that there’s only a total of 20 minutes of footage of the monster. The rest of the runtime is devoted to boring filler of scientists, politicians, and military officers observing the destruction and discussing how to stop the monster. I would always lose interest in these moments, that is, until Shin Godzilla, where the boardroom scenes function as a delicious political satire to demonstrate how utterly incompetent the government is at handling such an unlikely scenario. Everything gets wrapped up in red tape and by the time a solution is reached, most of Tokyo has been demolished. 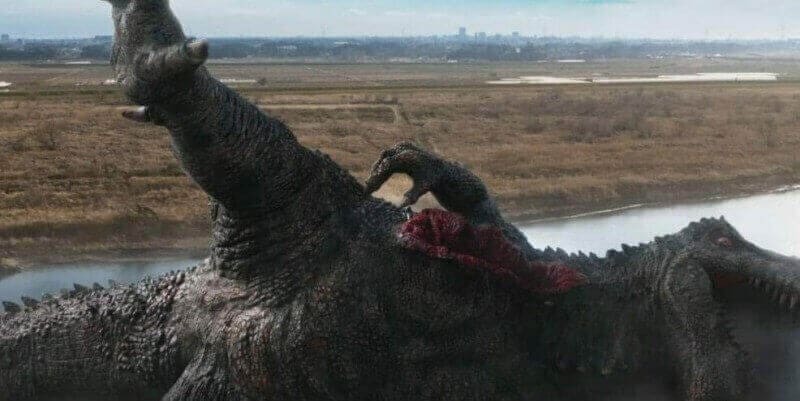 What To Do With the Dead Kaiju? takes this concept even further by eliminating all of the monster action and dedicating almost all of its runtime to the politicians as they uselessly scramble in boardrooms consulting with so-called experts and hold press conferences for the dumbest reasons, like announcing to the public the precise smell of the gas coming out of the kaiju (to quash initial reports of a “poo or puke” smell), or giving the dead kaiju the worst possible name (“Hope”). The satire has been compared to other comedies with a looming disaster as the central plot point like Adam McKay’s Don’t Look Up or Stanley Kubrick’s Dr. Strangelove.

As funny and over the top as it is, the film tends to drag near the end once the novelty of the story begins to wear off. Not to mention the frequent slow-motion shots, often used at questionable times, which seemed unnecessary for a movie with little action. There’s also a love triangle subplot between three government workers that I didn’t care for, one of whom has a mysterious past that isn’t fully explained. The ending was maddening and seemed like a cheap cop-out until someone with a lot more kaiju knowledge explained it to me. 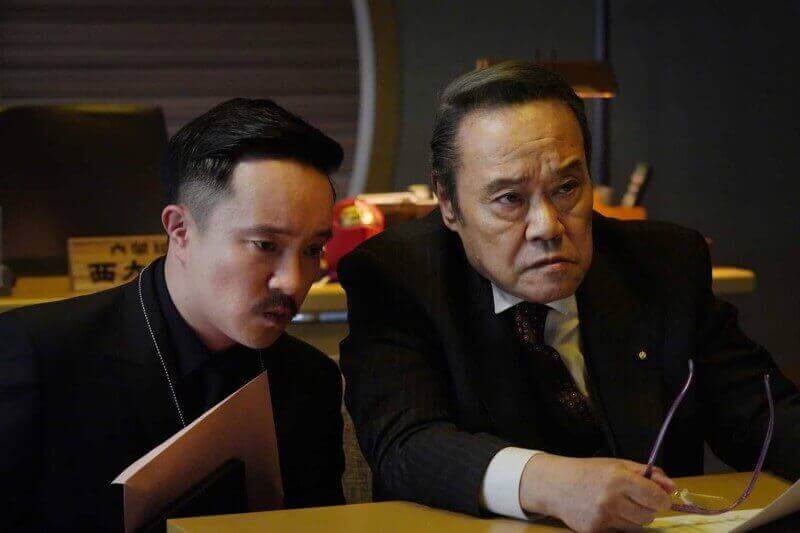 That being said, I believe a Western audience will probably enjoy What To Do With the Dead Kaiju? more than a Japanese audience, since it’s not our sacred cow that’s being slaughtered. Viewers should be made aware going in that this move doesn’t contain any kaiju action whatsoever, and once they accept that, they’ll be able to laugh out loud at its absurdity.

“Viewers should be made aware going in that this move doesn’t contain any kaiju action whatsoever, and once they accept that, they’ll be able to laugh out loud at its absurdity.”

Satoshi Miki’s What To Do With the Dead Kaiju? had its Canadian Premiere at the 2022 Fantasia Film Festival. Click HERE to follow our continued coverage of the festival and let us know what you would do with a dead kaiju over on Twitter, Reddit, Facebook, and in the official Nightmare on Film Street Discord. Heck, follow Nightmare on Film Street on TikTok for more horror movie recommendations while you’re at it. 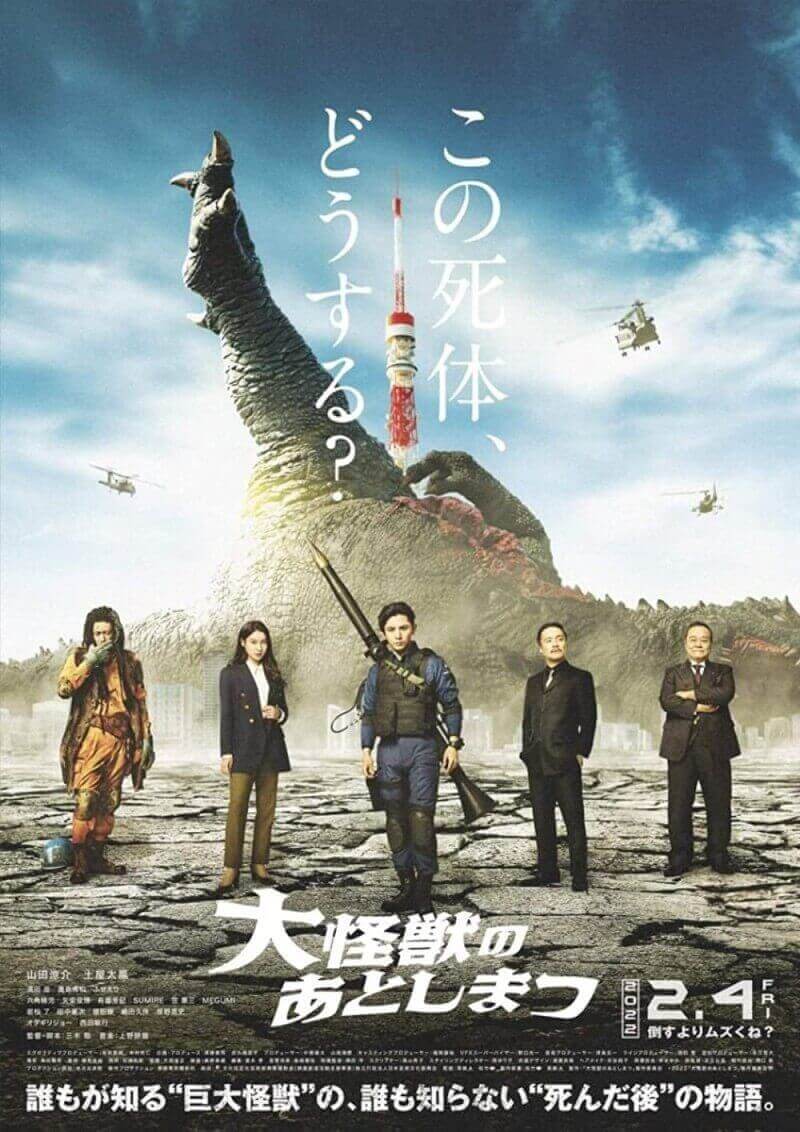 Review: WHAT TO DO WITH DEAD KAIJU?

TLDR As funny and over the top as it is, the film tends to drag near the end once the novelty of the story begins to wear off. That being said, I believe a Western audience will probably enjoy What To Do With the Dead Kaiju? more than a Japanese audience, since it’s not our sacred cow that’s being slaughtered. Viewers should be made aware going in that this move doesn’t contain any kaiju action whatsoever, and once they accept that, they’ll be able to laugh out loud at its absurdity.