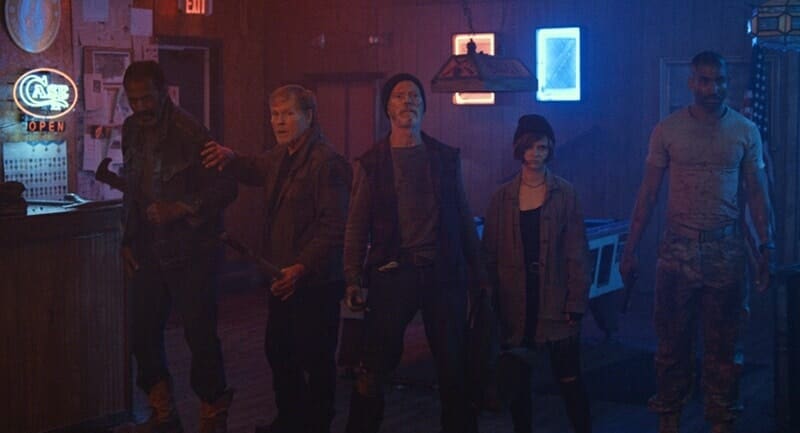 Joe Begos’ VFW came barreling down on Fantastic Fest 2019 like a grizzled and gory gang fight that very nearly crumbled the building after an unrelenting marathon of mayhem. The latest film to be released under the Fangoria label, VFW is one of two movies Joe Begos has at this year’s festival and features a cast of career ass-kickers doing what they do best. Chatter around the festival has been discussing the unmistakable John Carpenter influence — but you mean to tell me you don’t want to see Assault on Precinct 13 set in the world of Escape From New York with killer synth tracks scoring every second of this brutal and blood-soaked brawl??

In the not-too-distant future, a new drug has ruined the lives of so many Americans that the country has become a new wild west, absolutely decimated by addiction. Anyone unfortunate enough to live in areas where the police have retreated face a dangerous and lawless wasteland alone. Smack dab in the heart of this badland is the local VFW post where a group of aging brothers-in-arms have come to celebrate the birthday of an old friend. But when a woman comes crashing into the bar looking for a place to hide, the old-timers are called back in for one last tour of deranged and deadly duty.

“VFW is a pure, unadulterated shot of adrenaline injected straight into your f*cking eyeballs!”

Oh and by the way, the addicts of this new drug, Hype, aren’t your neighborhood variety ‘junkie’. They aren’t walking around asking for spare change, picking away at their faces, or scratching their necks raw. The addicts of VFW are mutants that would tear you apart with their bare hands if it meant getting their mitts on just one more hit. And those frenzied freaks aren’t even the real danger! The bikers responsible for hooking this army of the nearly-dead also happen to be ruthless killers that crush skulls first and ask zero questions later. Bad news for these badguys though- they f*cked with the wrong bar. Old friends become soldiers again for the day, calling on a lifetime of training and ass-whupping to turn these maniacs into minced meat.

The world created by co-writers Max Brallier and Matthew McArdle is a wasteland of barrel fires and body parts. It’s a desolate landscape brought to life beautifully by Joe Begos and the team around him. The Begos clan has a punk-rock, don’t-give-a-fuck, just get to work attitude toward filmmaking and it’s reflected in ever frame of VFW. Nothing is clean and nothing is polished because you don’t care how dirty the hands are that are reaching for your throat. You just dive head first into that fight and hold on for dear life. VFW is the dive bar of modern cinema, and everyone loves dive bars because they cut the bullshit and put character over corporate cleanliness.

VFW is a pure, unadulterated shot of adrenaline injected straight into your f*cking eyeballs! This movie kicks so much ass that you’re going to have to put the blu-ray on it’s own shelf for fear that it might pick fights with your other discs when you’re not looking. Genre legends Stephan Lang (Don’t Breathe), Fred Williamson (From Dusk To Dawn), and William Sadler (Tales From The Crypt: Demon Knight) are the heroes of this story, but they aren’t the cavalry charging in to save the day. They’re the guys that kicked the teeth out of the cavalry because they thought a few sore knuckles might make the whiskey burn a little better. Shoulder-to-shoulder with these grey-haired shit-kickers are Tom Williamson (All Cheerleaders Must Die) and Sierra McCormick (The Vast of Night).

This movie is straight-forward and simple, but it ain’t messing around. VFW is a hyper-violent Paradise by the Barroom Light. It’s a sick and twisted siege movie with some the most satisfying kills you’ve ever cheered for out loud. If you came to see how many different ways a head can explode, or just how deep Stephen Lang can bury a blunt axe into a mutant’s throat, you are going to be so happy to learn these grizzly truths.

“A hyper-violent Paradise by the Barroom Light”

TLDR VFW is a pure, unadulterated shot of adrenaline injected straight into your f*cking eyeballs! This movie is straight-forward and simple, but it ain't messing around. VFW is a hyper-violent Paradise by the Barroom Light. It's a sick and twisted siege movie with some the most satisfying kills you've ever cheered for out loud. If you came to see how many different ways a head can explode, or just how deep Stephen Lang can bury a blunt axe into a mutant's throat, you are going to be so happy to learn these grizzly truths.