[Review] INTO THE DARK: POOKA Is An Unpredictable, Modern Christmas Carol

“Who suffers by his ill whims? Himself, always.” The lines of Charles Dickens’ dark classic tale of holiday spirit, A Christmas Carol, continue to inspire thought and ignite emotion come the Christmas season.

Hulu’s Into The Dark series has released its own dark Christmas story, but has replaced the dreadful Jacob Marley apparition with a commercialized, manufactured children’s toy by the odd name of Pooka. Did you think Dickens’ poetic prose would ever apply to a funky electronic teddy bear? Me neither. However, it was not until Pooka’s final chilling scene rolled into end credits that I realized the episode’s main attraction eerily aligned with the legendary story.

Pooka is the newest, coolest, hottest toy of the year in the December installation of Blumhouse’s year-long holiday anthology, Into The Dark. He’s an adorable, somewhat bipolar, little teddy bear complete with bulging discs for eyes, mop-like fur, a red pill mouth, and a red circled belly. His mood swings one of two ways: naughty or nice. Pooka repeats the voices of those around him, but the mockery can go from playful to sinister in the turn of a phrase and you never know what you’re going to get.

While he inhibits all the superficial glory of a trendy toy, there is so much more to Pooka than his catchy jingles and floppy ears. Combining the visionary workings of director Nacho Vigalondo (Colossal) and zany intrigue of writer Gerald Olson (Flesh and Blood), this twisted holiday portrait shines a red, sinister light on Christmas using one desirable plushy bear.

Premise of the Past 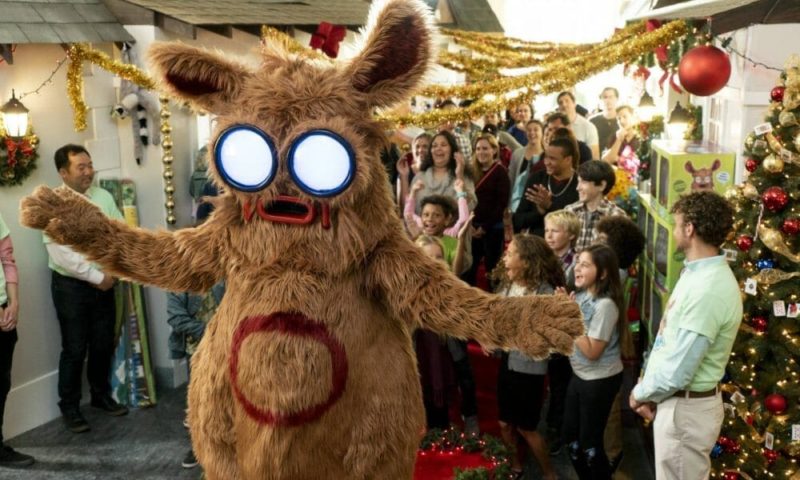 Pooka follows Wilson Clowes, a struggling actor who’s moved to the suburbs of California to start fresh with a blank slate of life. Determined to get the lead role as Ebenezer Scrooge in the adaptation of A Christmas Carol, Wilson is surprised to find out that his audition is not for that of a curmudgeon, but to fill the big furry feet of a life size Pooka. When a big-shot marketer presents him with an offer he can’t refuse, Wilson zips up the suit and becomes the iconic children’s toy sold exclusively at a single pop-up location.

At the beginning of this dark, peculiar situation Wilson is friendly, determined, and optimistic in achieving his goals. We don’t know where he is coming from (or running from), but his shrewdness in regards to what he is trying to change works. We do not need a detailed history to diminish the allure of what is about to happen to him, but all we need to know is obvious: it was not good. The character of Pooka is so loud and vibrant in Wilson’s ordinary world, he cant help but stand out like the toy super star he is. The opportunity to bury himself within the fluff of Pooka seems normal, but once those bright disc eyes turn red and a pretty new woman walks into Wilson’s life, Vigalondo proves he’s got the nerve to put out the strongest, darkest episode of Into The Dark so far.

The Present of Pooka Just when Wilson is beginning to feel stable and confident in both his career as a live action Pooka and in his relationship with Melanie and her young son Ty, Wilson experiences some odd behavior. Shuffling along streets in the costume with the moody atmospheric whirl of the score, Wilson begins to not only lose time but his mind as well. He becomes reliant on wearing the suit, even when Pooka’s sales take a dive. The bear, the character of Pooka is alive and present in Wilson, wreaking zany chaos on his life.

Like the moody bear, Wilson experiences rage and aggression out of nowhere with Melanie and her son usually taking the blunt end of his behavior. He’s taken on two opposing personalities, just like Pooka. Talk about method acting! It is terrifying as everything about Wilson and Pooka goes from cute to completely heinous in minutes. Pooka seemed like a gift to Wilson at first, but his presence brings everything but joy… unless he’s in an unlikely joyful spirit.

“If it were not for Vigalondo’s appropriate, yet wacky, sense of humor, Pooka would be downright horrifying…”

Vigalondo is really able to flex his directing muscles come the second act. He lays out the plot neatly, and timely, in the first, but takes advantage of the pacing in the middle to ramp up the demise of Wilson and the expanding autonomy of Pooka. Wilson’s world begins to twist and turn around the teddy bear. People and objects bend to the control of Pooka as the score emulsifies and pulses. Vigalondo emphasizes the importance of the color red, painting the stark color on everything Wilson wants and lusts after as well as the growing ferocity of Pooka itself. It’s easy enough to miss, but artfully executed.

Expertly placed quick cuts, layered scenes, and a harrowing tone with interesting transitions akin to, dare I say, Ari Aster’s Hereditary, brand this episode with style and substance. If it were not for Vigalondo’s appropriate, yet wacky, sense of humor, Pooka would be downright horrifying. While that’s usually the level we wish all horror features would attain, it keeps Pooka’s head attached and balances the environment of Christmas whimsy with impending doom.

Fate of the Future 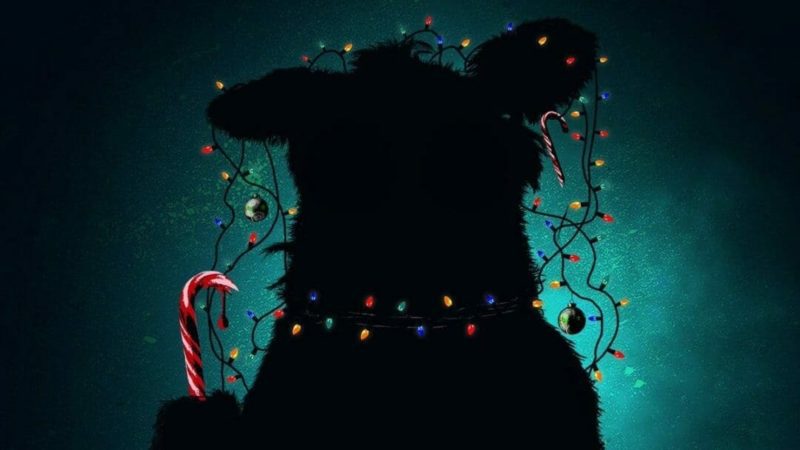 When Wilson finds that he has happily gotten everything that he’s ever wanted, Pooka’s power peaks. His anger reaches troublesome levels and his grip on reality slips. Like the naughty and nice Pooka, there is good and bad in Wilson. He is trying to outrun his bad past by doing good in the present so that he has a pleasant future, but the toy’s chaos. In a way, Pooka acts like the ghosts of A Christmas Carol, but he’s a little more paws-on in the situations Wilson faces.

Time becomes a manipulated concept, something that usually misses the mark, but Vigalonda nails it spot on, as Wilson is faced with an ill-fated future. Rather than regurgitating the same old Dickens song and dance, Pooka stands on its own by throwing in some satisfying curves and unpredictable twists. Is Wilson granted redemption the way Ebenezer Scrooge does come Christmas morning? It all depends on Pooka’s mood.

“Rather than regurgitating the same old Dickens song and dance, Pooka stands on its own by throwing in some satisfying curves and unpredictable twists.”

Pooka is masterfully awkward with a deeply seeded element of doom. It’s a strange, modern take on A Christmas Carol, but breaks the rules in all the right places to seal it with a necessary horror factor. The portrayal of stark comparisons is perfectly told in a modern, fun, scary way with a relevant arch supported by the hysteria of mass trends. Given the imagery and concept, we think we know what Pooka is going to be about, however Vigalondo’s touch and Olson’s writing is anything but ordinary. Our expectations are not only met, but change as the plot progresses and Pooka makes its way from the screen to our heart. The sharp turns and drastic changes in tone just goes to show…You never know what Pooka will do!

What did you think of Pooka? How badly do you want a Pooka of your own? Let us know over on Twitter, Reddit, or in the Horror Fiends of Nightmare on Film Street Facebook group!

TLDR Pooka is masterfully awkward with a deeply seeded element of doom. It's a strange, modern take on A Christmas Carol, but breaks the rules in all the right places to seal it with a necessary horror factor. The portrayal of stark comparisons is perfectly told in a modern, fun, scary way with a relevant arch supported by the hysteria of mass trends. Given the imagery and concept, we think we know what Pooka is going to be about, however Vigalondo's touch and Olson's writing is anything but ordinary.