It’s A Haunting on Film Street month here at NOFS, and we’re turning the spookiness up to 10. For this month’s edition of Making a Monster, we will be looking at the A-list creepy that broke into stardom in James Wan’s 2013 hit The Conjuring. In fact, the little bundle of boo!’s hit the scene so hard that three sequels headlining her name were destined to follow. That’s right, let’s dive into the movie magic behind the creation of the Annabelle doll! Many of you are aware that the Annabelle doll does indeed exist in our real world, though it looks quite different than the one we see on the big screen. Well, that’s Hollywood for you. The real Annabelle is a run-of-the-mill Raggedy Ann doll tucked away in the infamous Ed and Lorraine Warren museum. Though obviously not as visually arresting as the porcelain nightmare in The Conjuring, looks aren’t everything. According to the legend retold in a piece by the New Haven Register, Annabelle was gifted to a young nurse by her mother in the late 1970’s. Not long after, the doll was found in multiple different positions, in different rooms, or ever-so creepier, with parchment notes pleading “help me” though no parchment paper was in the apartment.

Blood appeared to leak from the doll in one instance, and an unlucky male friend decided to take a nap in the wrong household, waking up to scratches to his torso and a definitely not guilty Annabelle staring at him. The nurse and her roommates called in a medium to hold a seance (something any seasoned horror vet knows is a big “whoops”) and learned of a girl named Annabelle Higgins, who lived at the apartment location before it’s construction and died at the age of 7. After making another terrible to decision to give Higgins’ spirit permission to inhabit the doll, the Warrens learned of the situation, contacted the women, and acquired the doll, locking it away from direct human contact. And we all know it’s never truly that easy, as an overconfident museum guest found out. After supposedly taunting Annabelle in her glass case, the unruly patron soon died in a motorcycle accident.

When I began researching the designing of the film-used Annabelle doll, I’d assumed that the filmmakers opted for a more sinister-looking doll from the get-go for obvious horror film reasons. However, this was not the case. Once James Wan and his crew decided to include the Annabelle story in The Conjuring, they actually applied for licensing to include the Raggedy Ann version of the doll, which failed. One can imagine why the manufacturers of Raggedy Ann may not have wished to have their product suddenly be responsible for countless children’s nightmares. Having to look elsewhere, Wan was pointed towards VFX artist Tony Rosen by a makeup artist working on the film. Some of Rosen’s work was displayed at his wife’s hair salon in Wilmington, North Carolina, where The Conjuring had begun filming. Wan showed him several designs for Annabelle, all of which he was less than impressed with.

In an interview with WETC 6 Wilminton, Rosen explained, “They had a bunch of designs that someone else had done and they said they didn’t want anything like those designs because they didn’t like what they had been getting, so they just said, ‘Go make, not what this is.” Wan and the production team wanted something more creepy and antique than visually disturbing (I’d argue they ended up with both). Having been given two days to show his stuff, Rosen and his wife Melanie Dueck crafted 10 unique designs for Annabelle, with the final product having traits from several of them. The artist would go on to make several different versions of the doll which would appear in The Conjuring and Annabelle.

Even with the real-life Annabelle locked away in the Warren’s museum, the new doll carried its own sets of scares that plagued the sets of The Conjuring universe. In a collection of on-set stories featured on Pop Sugar, tales of creepy circumstances and dangerous situations were abound on the sets of each film, so much that the films have a reputation of requiring set blessings from priests! On the set of Annabelle Comes Home, star McKenna Grace fell victim to very ill-timed bloody noses. “They had to turn off the lights for some reason to test something or whatnot. And then whenever the lights came back on, I just had this stream of blood coming out of my nose. And then I wiped it, and I had blood all over my hands. And it only stopped bleeding after I walked out of the stage, because the restroom is outside,” she told Pop Sugar.

Producer Peter Safran, who worked on the sets of every film in the Conjuring universe, has perhaps the most unsettling experiences. On the set of Annabelle, in the first day featuring “the demon” played by actor Joe Bishara in full makeup, Safran witnessed a chandelier fall and smash onto another actor’s head as Bishara walked in front of him. As it turns out, the unlucky actor played a character who was set to die in the film, killed by Bishara’s “demon.” The death in the film was later cut from the final version. Earlier on in his time on the set of The Conjuring, Safran was woken up almost every night at 3 am (the witching hour!) by creaking floorboards in the old house he rented while filming. “I would never walk out there to see what it was. I just thought it was much better not to.” I would agree.

What to Buy Your Demon This Christmas

While the Annabelle films themselves aren’t for everyone, it’s hard to ignore just how profoundly woven into horror culture the Conjuring universe icon has become. This is interesting to me considering just how much the doll does not do. In the films, Annabelle is not possessed but is physically manipulated by unfriendly spirits, rocking the doll in a chair, tilting its head, or what have you. Unlike everyone’s favorite killer doll Chucky from the Child’s Play franchise, the Annabelle doll does not speak, come alive on it’s own, or even hammer babysitters straight out of a high-rise window. For this reason, I would place the doll more on the level of, say, the Lament Configuration puzzle box from Hellraiser or the Necronomicon of The Evil Dead – as they are summoners of evil and not the monsters themselves. I should probably change the title of Making a Monster to Making a Monster’s Object That They Use to Unleash Their Monster-ness Upon You, but that seems a little long-winded. I’m not good with words.

Where would you rank Annabelle among the creepy dolls of horror? Who would win in a fight between Chucky and Annabelle? Has that question been asked so many times already that its existence clogged up my search results and made any relevant research incredibly difficult? Who knows?!? But let’s talk about it over on Twitter, in the Nightmare on Film Street Subreddit. and on Facebook in the Horror Movie Fiend Club! 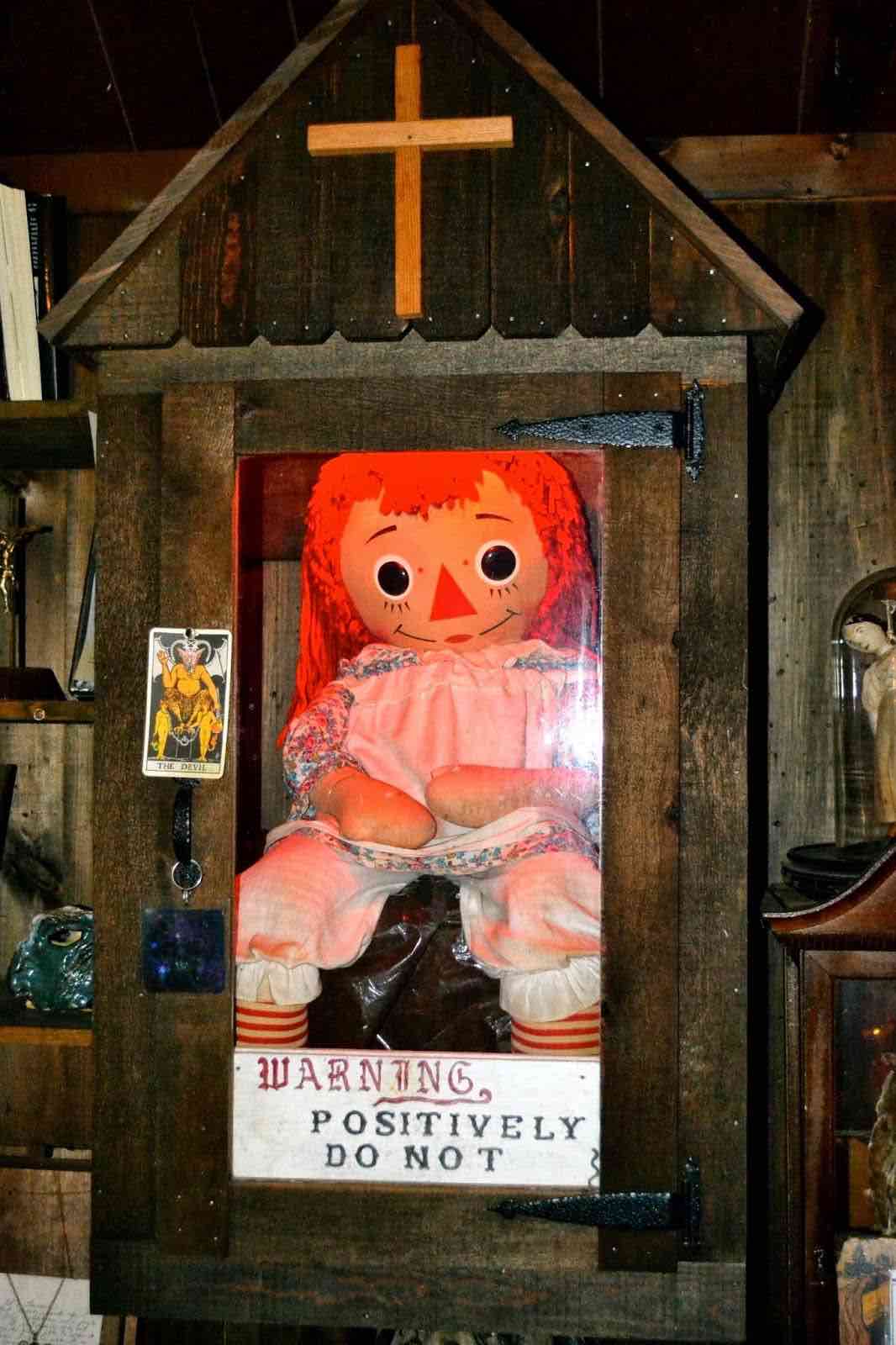