“What’s in the box?!” As it turns out, there are much worse things to find in there than Gwyneth Paltrow’s head.

It’s Hot As Hell this month at Nightmare on Film Street, and well, it’s certainly hot as hell! Nature’s oven currently sets at 95 degrees outside my door, but I’m cool as a corpse here in my basement lair, yet I’m 8 feet closer to hell. Turn’s out, that’s a pretty solid place to be considering the subject matter for this edition of Making a Monster. Today, I AM THE PAIN as we discuss our favorite extra-dimensional beings who know what good suffering is, the Cenobites of Clive Barker’s 1987 Hellraiser! Putting Hell in His Own Hands

In a very detailed collection of Clive Barker’s work and the history behind it, we learn the beginnings of Hellraiser, the Cenobites, and the universe they operate in. Like many great works of cinema, the story begins the same – frustration. Dissatisfied with the adaptations of two of his works (Underworld, Rawhead Rex) Barker decided to take matters in his own hands and create his own feature. With this came The Hellbound Heart, the novella that would serve as the basis for Hellraiser. The work introduced the Cenobites, a gang of sadomasochistic extra-dimensional beings who inflict extreme sexual experiments on their victims, blurring the lines of pain and pleasure.

The original screenplay adaptation only focused on one leader Cenobite, with others operating in the shadows. However, Barker later instructed his creative team (made up of Bob Keen, Geoff Portass, and Jane Wildgoose) to design four “super-butchers”, as he called them, highlighting to a great level of detail the self-mutilation. “Nothing springs into my imagination without having inspiration in other things I’ve seen or experienced,” Barker said. “The Cenobites were no exception. Their design was influenced among other things by punk, by Catholicism and by the visits I would take to S & M clubs in New York and Amsterdam.” The director found additional inspiration from a book he once read depicting African fetishes, with carvings and sculptures of human heads with dozens and dozens of piercings, sometimes even hundreds of spikes and nails (sound familiar?)

“As we all know, creature design is only half the battle. Having talented actors behind the makeup and masks is where the battles are won.”

Jane Wildgoose described the notes she took from Barker when beginning the design process. “My notes say that he wanted 1.) areas of revealed flesh where some kind of torture has, or is occurring. 2.) something associated with butchery involved’ and then here we have a very Clive turn of phrase, I’ve written down, ‘repulsive glamour.’ And the other notes that I made about what he wanted was that they should be ‘magnificent super-butchers’. There would be one or two of them with some ‘hangers-on’ as he put it, and that there would be four or five altogether.” As we all know, creature design is only half the battle. Having talented actors behind the makeup and masks is where the battles are won. Fortunately for Barker and his crew, they had quite the unholy army. 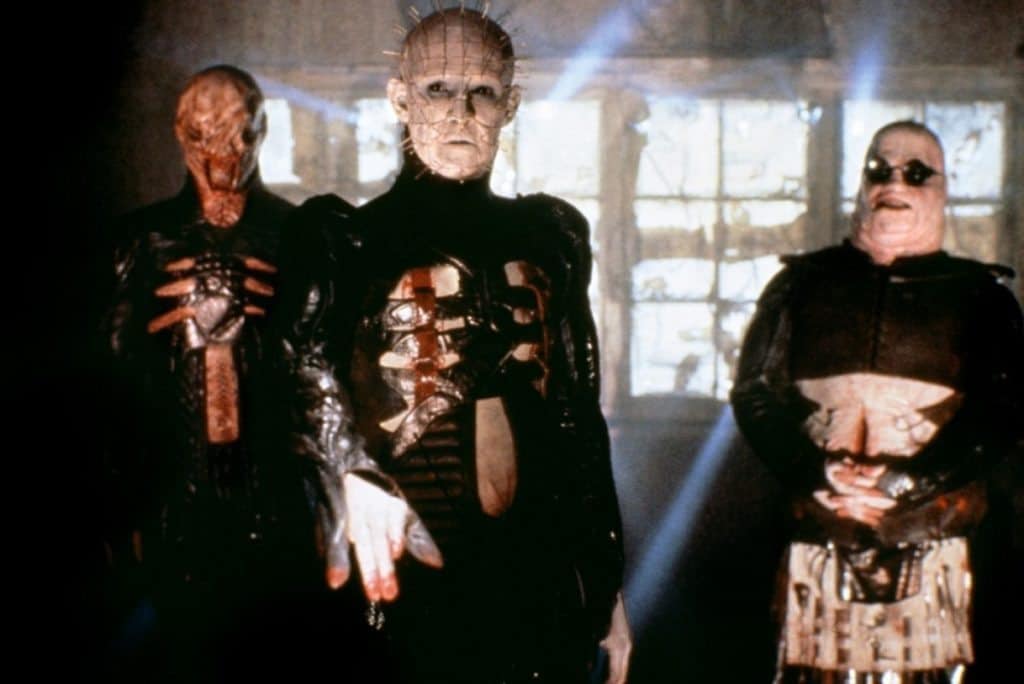 Demons to Some, Angels to Others

With the unique instance of covering four monsters in one edition, I thought it would be interesting to hear from each of the actors portraying their respective Cenobite. First, Doug Bradley, who portrayed the iconic Pinhead for a total of eight Hellraiser films and whose name is forever enshrined in horror’s hall of fame, spoke to The Guardian in 2017 about his first time behind the pins.

The makeup took five or six hours to put on at first, though they got it down to three or four. The first time I wore it, I sat in front of the mirror trying to make friends with this new face, playing some lines and seeing where they took me. Most of my decisions about playing Pinhead were made there and then. I had a sense of power, of majesty, of a kind of beauty. His threat is implied: look what I did to myself – now imagine what I can do to you.

Just using the eye test, it would have been my assumption that whoever had the pleasure (pain) of playing the Butterball Cenobite probably had the worst time in the makeup chair. In an interview with Pop Horror, actor Simon Bamford spoke about the difficulties in portraying the character.

Clive initially said there would be a little makeup involved for Butterball. The reality was similar to having several pillows taped tightly over my entire head. No eye holes for vision, no ear holes for sound and no nose holes. Breathing was only through the mouth which constantly filled with saliva because the large prosthetic teeth fitted over my own meant I was unable to close my mouth. The mask was around 2 inches thick, made of foam latex, molded inside to be an exact match to my face. Once glued inside, I was blind, deaf and dumb for sometimes 12 hours a day. It was incredibly claustrophobic, and I had a few panic attacks during the 3 months filming on each shoot. A deeply unpleasant experience.

Perhaps the most interesting/disturbing Cenobite, the Chatterer was played by actor Nicholas Vince, whose own health troubles in his early years served as a template for his own character. Born with a condition where his upper jaw closed behind his lower teeth, Vince endured a grueling surgery and recovery that found him near death. The actor told Barker about a documentary he had seen involving a similar procedure as the one he underwent, where surgeons peeled back the upper lip of a patient to access the upper jaw. In an interview with Devolution Magazine, Vince recounted his time on the Hellraiser set.

Simon and I both had it pretty bad (in terms of not being able to speak, hear or see) and Simon’s makeup was even thicker than mine! Somebody said mine “… was a very controlled performance,” and it really was. I had trousers when everyone had skirts, and it was all sculpted. I did a body cast so they could get the leather as tight as possible. I couldn’t turn my head at all because of the high neck of the costume, so yeah, it was a very measured and controlled performance for that reason too. We had to shoot it in very small segments so I was able to remember what was needed. It was a challenge but interesting.

Unfortunately, little information is available surrounding Grace Kirby’s portrayal as the Female Cenobite, as the actress moved on from acting in feature films after Hellraiser‘s release. The role was recast with actress Barbie Wilde in the sequel Hellbound: Hellraiser II, and she discussed with Morbidly Beautiful the changes that resulted, and that risque nickname the makeup crew gave her Cenobite.

Grace Kirby and I were very different facially, so many of the changes to the design of the makeup were inevitable. Again, since we were so different, they felt that my “throat jewelry” had to be different too. It took four hours to apply the prosthetic pieces and then the makeup and a half an hour to get into the costume. Of course, a lot of time was also spent designing the makeup, creating a cast of my head, making up the prosthetic pieces and doing countless makeup tests on me. Ah, that pesky nickname! In the first Hellraiser film, Pinhead was actually called Lead Cenobite; the Chatterer was called Chattering Cenobite, etc. By the time Hellbound rolled around, the nicknames that the makeup crew had used during the filming of the first film had stuck, so the names Pinhead, Chatterer and Butterball were used in the credits. Unfortunately, my character’s nickname was Deep Throat (for obvious reasons), and that name was deemed too rude to be used in the credits, especially in the United States. Such Sights to Show You

Apologies for the analogy, but when you first make the jump from your typical slashers to the Cenobites of Hellraiser, it essentially is a jump from late night HBO to hardcore porn. The Cenobites are really as intense as they come in the horror universe, making them a unique entry in Making a Monster. Yet despite the intensity, Pinhead is likely as recognizable of fictional figure as Freddy Krueger and Michael Myers. I think this may be due more to the lore of Hellraiser and the reputation of it’s brutality more so than how many of us have actually seen the film, which would be a shame. The franchise has shied away from the public eye over the years, as only four of the films have made it to the big screen, with the subsequent five having been released direct-to-video. While their quality certainly varies depending who you talk to, I would highly recommend going back to Clive Barker’s original work and seeing the gang of hell raisers in action. What do you have to lose, except for an eternal sentence of pain and torture? Just remember, if you open it, they come.

How old were you when you were first introduced to the Cenobites of Hellraiser? Are you aware that crying is just a waste of good suffering? Before you have your soul torn apart, solve the puzzle box and come talk about what great sights you see on on Twitter, in our Official Subreddit, or in the Fiend Club Facebook Group! 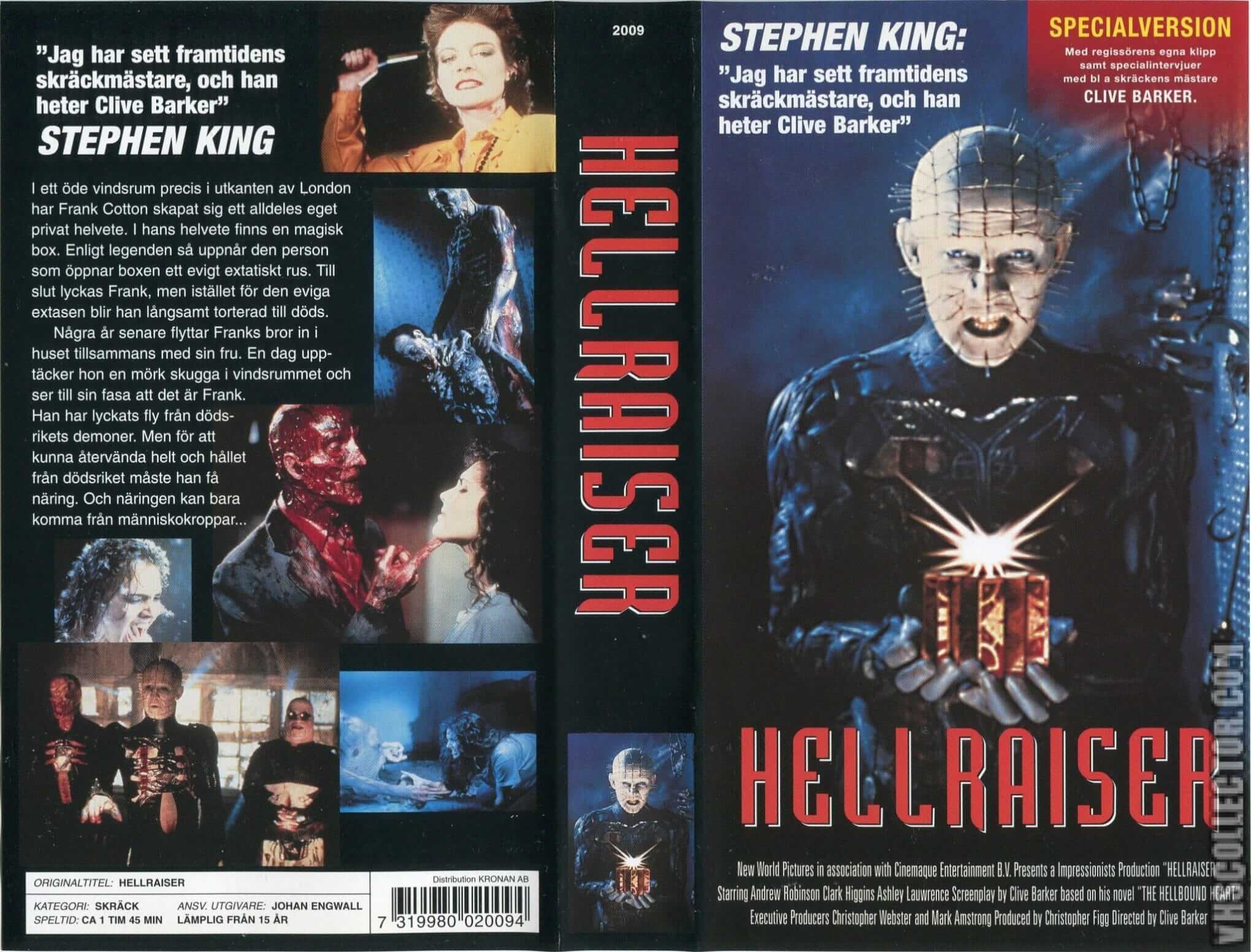