Adam Egypt Mortimer’s Daniel Isn’t Real was an official selection at the 2019 Overlook Film Festival, and quite possibly one of the most arresting movies of the entire festival. It’s a great time for people that like rough rides and an entirely original approach to the imaginary-friend-gone-amock subgenre. Adapted from Brian DeLeeuw’s novel by himself and Adam Egypt Mortimer, Daniel Isn’t Real is a psychological horror that pits a fragile young man against himself and the horrors of his own psyche. The film stars Miles Robbins and Patrick Schwarzenegger as an odd couple on the verge of insanity, whose dependency on each other is nothing more than a house of cards that could collapse at any moment.

We recently had the pleasure of talking with Director Adam Egypt Mortimer and during the interview, he asked what movies I would compare Daniel Isn’t Real to. Usually a pretty easy question but my brain fell out when he asked it because Daniel Isn’t Real isn’t quite like other movies. I managed to fumble out a light comparison to Mary Harron’s American Psycho (2000) and David Fincher’s’ Fight Club (1999), two movies that deal with unreliable narrators on the verge of a breakdown, but the comparisons can only be drawn for character’s traits. The story itself is a maze of mythos and metaphysical mystery that sets it apart as a truly unique piece of filmmaking.

“A maze of mythos and metaphysical mystery […] a truly unique piece of filmmaking.”

When young Luke (Miles Robbins) runs up against some very heavy, adult world problems his mind gifts him a best friend named Daniel (Patrick Schwarzenegger). Like any best friend, Daniel is there for Luke when no one else is, helping protect him from anything and anyone that means him harm. Of course, this is Daniel‘s definition of harm and after a particularly dangerous decision the two make, Luke is forced to turn his back on his best friend. It’s our first impression that Daniel might have a life of his own, separate from Luke. Although not an entirely unreasonable assumption to make before any “Imaginary Friend” horror movie, Daniel Isn’t Real is anything from your typical movie and makes quick work of reducing your expectations to rubble so it can begin building its own house upon the rock.

Years later, as the stable foundation that has anchored Luke’s adult life begins to rot away, and his world become too complicated to handle, Daniel reappears to help solve his problems and take control of his life. Control is a big part of Daniel‘s M.O. and we see him exercise it over Luke at every available opportunity. He helps Luke impress girls, take up a creative hobby, and get his mentally unstable mother the psychiatric help she so desperately needs….but Daniel cannot be ignored and he establishes that very quickly. Daniel isn’t real, but Luke’s obedience to his suggestions and advice give him an access to the world that dies without Luke submission. For a while this isn’t a problem because Daniel makes Luke the person he’s always wanted to be. With Daniel, Luke is a confident, self-assured budding artist who knows how to talk to women and always puts his needs ahead of everyone else- something he’s never experienced living under the shadow of his mother’s psychosis. 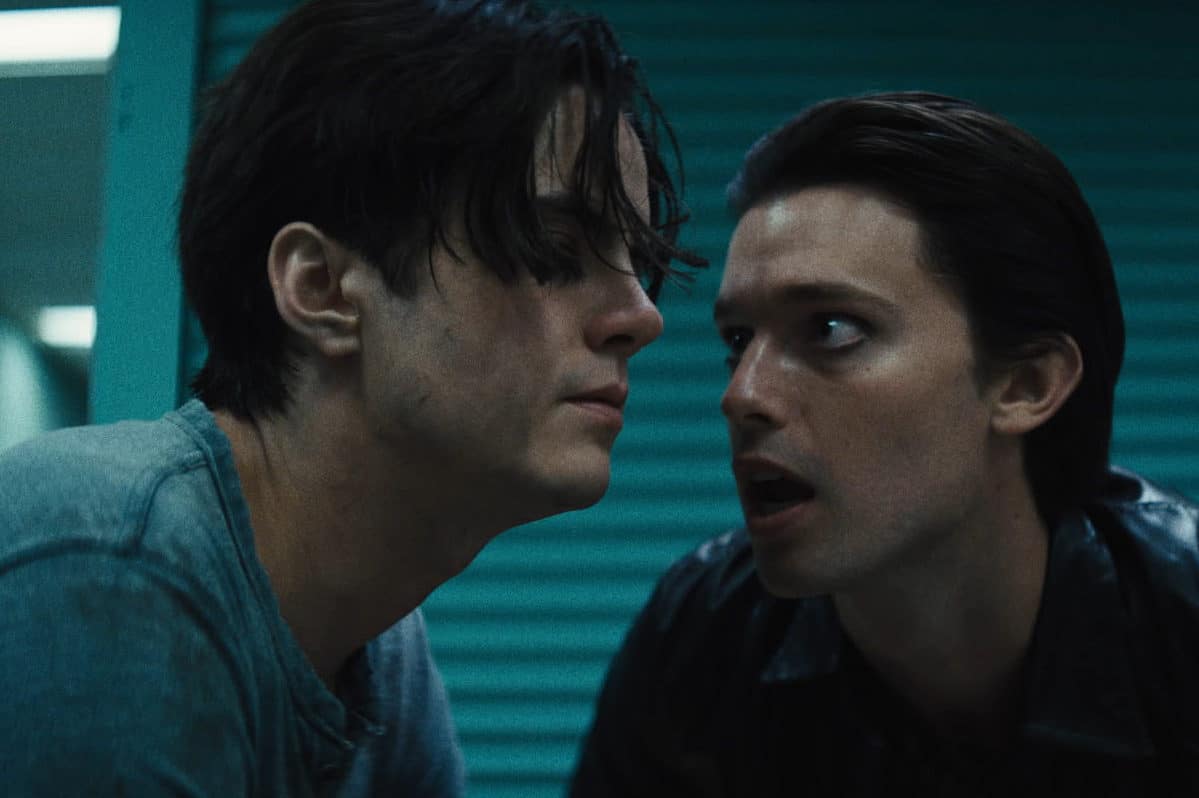 Daniel is a convincing and seductive devil on Luke’s shoulder but like an alcoholic who drinks from a bottle until the bottle drinks from him, Luke is in over his head before he realizes he’s already buried under the floorbeds of a self-constructed house of pain. The world shines just a little brighter when Danil is around but only because he is hiding the darkness from Luke. It still exists, and it is still coming for him but for a short while, that unimaginable pit of despair is nothing more than a harmless mess tucked away in the recesses of an unused closet.

Daniel Isn’t Real is one of the most unique and confident stories I’ve seen on screen this year. The film is unafraid to bulldoze your sense of safety and completely gut you from the inside. No one is safe from Daniel, especially Luke but most of all you, the viewer. Patrick Schwarzenegger is as charismatic as a cult leader and as destructive as demon determined to possess and perverted you. He rebuilds Luke from the ground up, shaping him in his image, only to crawl inside him at his weakest point and tear him apart. Equal parts Tyler Durden and Captain Howdy, Patrick Schwarzenegger’s Daniel is the person you regret befriending after it’s already too late. The childhood friend that coerces you into murdering the neighborhood bully. The acquaintance that throws to the wolves after you pressuring you into an uncomfortable situation. All kinds of bad news wrapped around a beguiling smile.

In a lot of ways, especially with such heavy subject matter, Daniel Isn’t Real is a bummer, but it’s a bummer with harrowing sequences of physical and mental transformations that literally tear our protagonist apart, and a horror-laden landscape that I can only describe as Twin Peaks’ Black Lodge on even stronger acid. It’s a bummer, but it’s my kind of bummer!

Stick around Nightmare on Film Street for even more festival coverage, and check out our Twitter and Instagram pages for highlights from the event. TLDR DANIEL ISN'T REAL is one of the most unique and confident stories I've seen on screen this year. The film is unafraid to bulldoze your sense of safety and completely gut you from the inside. In a lot of ways, especially with such heavy subject matter, it's a bummer but it's a bummer with harrowing sequences of physical and mental transformations that literally tear our protagonist apart, and a horror-laden landscape that I can only describe as TWIN PEAKS' Black Lodge on even stronger acid. It's a bummer, but it's my kind of bummer!