I’ve often wondered if my obsession for horror and true crime would ever come in handy in the real world. Like, if I were being pursued by a bloodthirsty killer, would I know what to do and what not to do in that scenario, based on what I’ve seen in movies? I would like to think so. But after watching Vicious Fun, I realize I would panic and end up decapitated like any other idiot in a horror flick. The Canadian horror-comedy comes courtesy of Black Fawn Films and was co-written (along with James Villeneuve), directed and produced by Cody Calahan, a filmmaker I’m not too familiar with, but has quite the filmography to pick through. All I can tell you for certain is that Vicious Fun is a lot more quick-paced compared to his slow-burner The Oak Room, releasing this month.

Dweebish horror writer Joel (Evan Marsh, Riot Girls) is hunting for inspiration for his next big piece in Vicious Fanatics magazine. After getting blackout drunk at the bar of a Chinese restaurant and passing out in the supply closet, he wakes up and accidentally stumbles in on an after-hours self-help group for serial killers. Thinking he’s there for the meeting, the moderator Zachary (David Koechner, Cheap Thrills) tells Joel to join the circle.

“…full of twists and unexpected outcomes to keep you on your toes […and] action coming at you from every angle.”

The meeting is attended by different killer archetypes. Zachary takes pleasure in his job as the general of a government death squad. Hideo (Sean Baek, Killjoys) is a deadly assassin with a taste for human flesh. Mike (Robert Maillet, Becky) is a seven-foot mountain of muscle who likes to slash teenagers while wearing a mask. Fritz (Julian Richings, Anything For Jackson) dresses like a clown and injects his victims with paralyzing chemicals. Carrie (Amber Goldfarb, Bad Blood) seduces creepy old men before slicing their throats. And Bob (Ari Millen, Orphan Black) is a sly ladykiller, in both senses of the word. In order to survive until the end of the meeting, Joel has to convince the professional murderers that he is one of them. Unfortunately, he is a terrible liar.

From the very beginning, Vicious Fun is a fiercely entertaining ride. But the fun factor is turned up to 11 in the second half of the film, once all the characters have been established. Enter the mustachioed police force who are as hilarious as they are incompetent, destined to become bodies for the pile. The story is full of twists and unexpected outcomes to keep you on your toes. You don’t want to be glancing at your phone at any point during the film, because you will miss out on all the action coming at you from every angle.

The entire cast is great and each actor appears to be having fun with their given role. Evan Marsh’s performance is cringe-inducing at times as he digs himself deeper into a pit of lies. But I think that’s the point since he seems to be taking a page out of the Michael Cera playbook. I’m not sure how I feel about Julian Richings as a psychotic clown. I found him a lot more convincing when we are first introduced to his character, approaching his hobby as a killer with the cold calculated energy of an accountant. David Koechner knocks it out of the park as always, sneaking in a spark of darkness into his trademark Midwestern drawl. He also has probably the best death scene in the entire movie.

We get to see each killer in their element, using their unique techniques to take out their victims one by one. Blood sprays against the wall and guts spill out onto the floor. This is yet another film that pays tribute to the ‘80s, and it can be seen and heard in everything, from Steph Copeland’s synth-heavy score, down to the practical gore effects, and analog technology. Bob is the epitome of the ‘80s style, with his blonde Billy Idol hairdo paired with his white sports jacket. The colourful lighting and set design make for a visually stunning experience, particularly the neon glow of the Chinese restaurant after-hours. 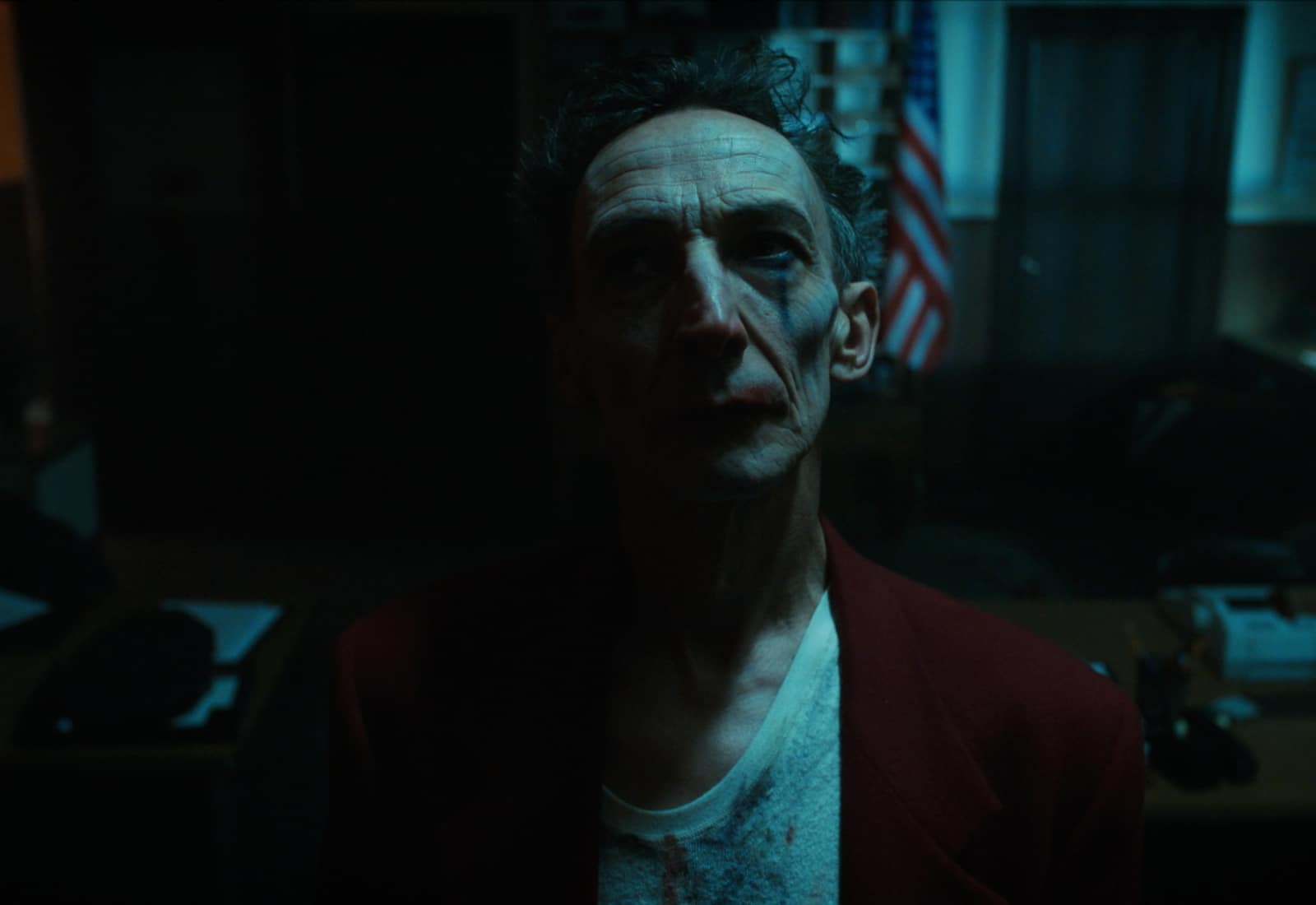 The dialogue gives the occasional wink and nod to horror fans, playing on common tropes within the genre. For example, Mike is criticized for his sloppiness because he always manages to let one girl escape every time he goes on a killing spree at a campsite or at a sorority house. There’s plenty of easter eggs hidden throughout, you just gotta know what to look for.

In conclusion, Vicious Fun is…well, really really fun! Whether you’re a casual observer of the horror genre or a full-on nerd like Joel, there’s something for everyone. It’s the kind of movie where everyone can pick their favorite character to root for (mine is Mike) and later discuss how they think they would bullshit their way out of a room full of serial killers.

“Whether you’re a casual observer of the horror genre or a full-on nerd […] there’s something for everyone.”

Vicious Fun celebrated its U.S. Premiere at Panic Fest 2021. Click HERE to follow our full coverage of the festival and be sure to let us know what you thought of the film or who your favorite killer in Vicious Fun is over on Twitter, Reddit, Facebook, and in the official Nightmare on Film Street Discord. Not a social media fan? Get more horror delivered straight to your inbox by joining the Neighbourhood Watch Newsletter. 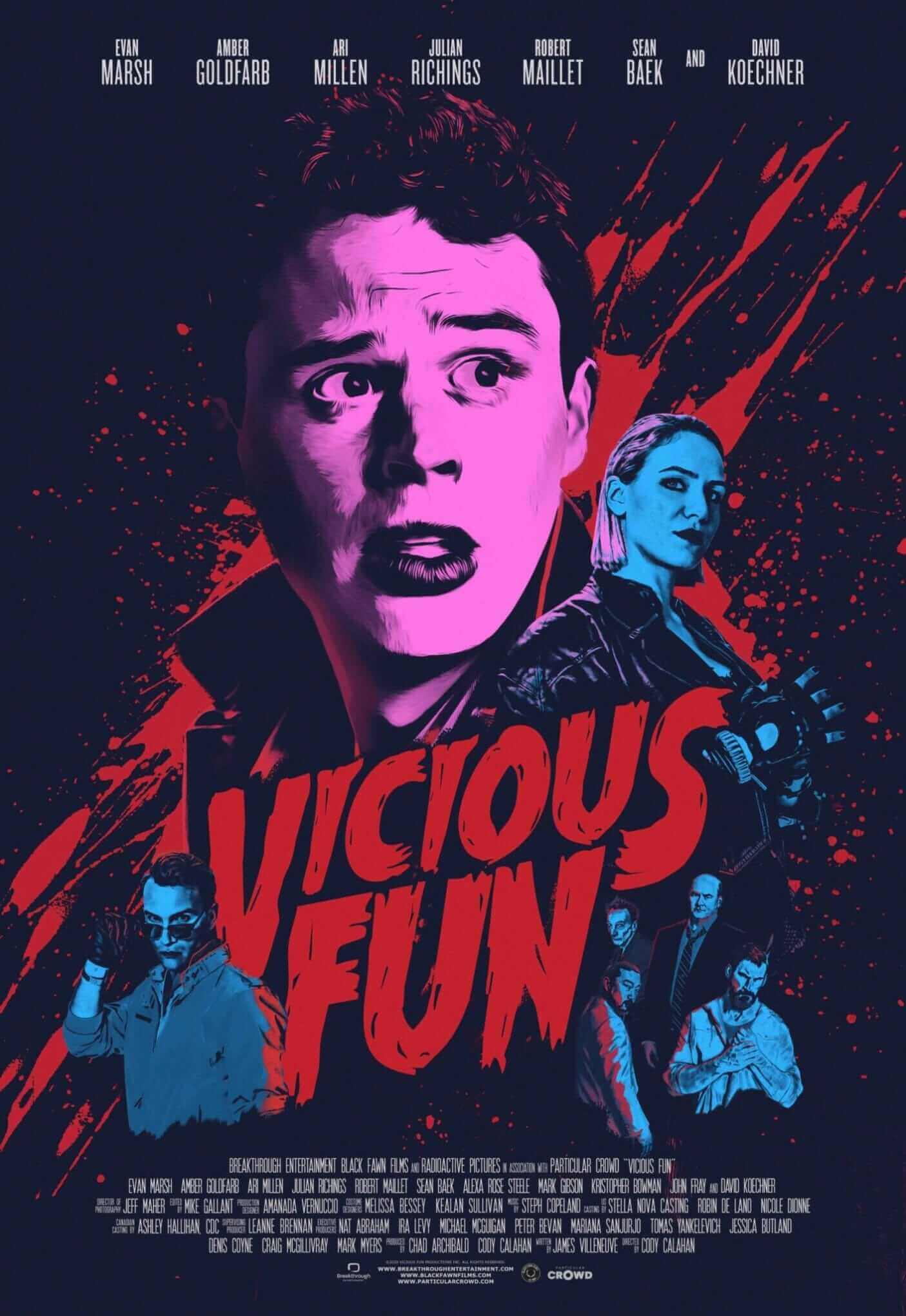 TLDR Vicious Fun is...well, really really fun! Whether you’re a casual observer of the horror genre or a full-on nerd like Joel, there’s something for everyone. It’s the kind of movie where everyone can pick their favorite character to root for (mine is Mike) and later discuss how they think they would bullshit their way out of a room full of serial killers.