[Review] Home Intruders Pick the Wrong BECKY to Mess With

Rage fuels the title character in Jonathan Milott and Cary Murnion’s movie Becky. After her mother’s unfortunate passing, the teenager is understandably angry at the world. This includes her father, who has since moved on with a new woman. As luck would have it, their awkward weekend getaway is interrupted by a group of escaped convicts. The intruders search for a mysterious key and will do whatever it takes to get it. Becky, similarly, will do whatever it takes to protect herself — even if that means killing her enemies, one by one.

There is an uptick in home invasion movies these days. What was once commonplace in horror eventually became tired and infrequent. Yet Us and the Strangers sequel both prove audiences are willing to partake so long as the movie is worthwhile. With its premiere at the Tribeca Film Festival cancelled, Becky was scheduled for a home release. Its new destination is not a comment on the movie’s quality, though. In truth, Milott and Murnion approach the subgenre with a sort of novelty not seen in quite some time.

Becky has an all too familiar setup — one parent dies and the surviving spouse struggles to keep a relationship with their child — that thankfully never overstays its welcome. With the formalities out of the way, the movie inches closer to its more engaging story. Becky (Lulu Wilson) is mad at everyone and everything; her coping mechanism largely consists of lashing out at her clueless father (Joel McHale). He’s taken her to their remote cabin for the weekend, where Becky is taken surprise by her father’s new girlfriend (Amanda Brugel) and her son (Isaiah Rockcliffe).

In the meantime, a bus transporting dangerous prison inmates crashes and four of the passengers head towards the cabin so they can find a key. Seeing through Neo-Nazi Dominick‘s (Kevin Jame) ruse, the family is immediately captured with the exception of reclusive Becky. Not even half an hour has passed and the movie is already foregoing further exposition in favor of action and thrills. No complaints here as the plot is already so flimsy. Becky steps up as some kind of adolescent Rambo. She makes it clear early on that she’s not playing around despite her innocent façade. This is where Dominick and his goons fail. See, they underestimate their opponent, who easily seems like a happy-go-lucky kind of kid on the outside. Rather, grieving Becky is ferocious with how she takes down her enemies. It’s quite startling to see if one was somehow expecting something more like Home Alone but set in the woods. Using her wits and resources, Becky delivers blood-squirting revenge with nary a flinch. Lulu Wilson‘s physical stature is negligible when considering she gives a physical performance that is well beyond her years.

On the adult side of the cast, Joel McHale often feels misplaced. Drama is not exactly his first calling so his peers have to pick up the slack from time to time. Amanda Brugel is the most flexible of the older bunch as she wields both survival dialogue and sarcastic barbs with equal ease. As committed as he is to the part, Kevin James is weighed down by weak writing. Even so, the scenes where his character goes toe to toe with Becky are tense and rewarding. 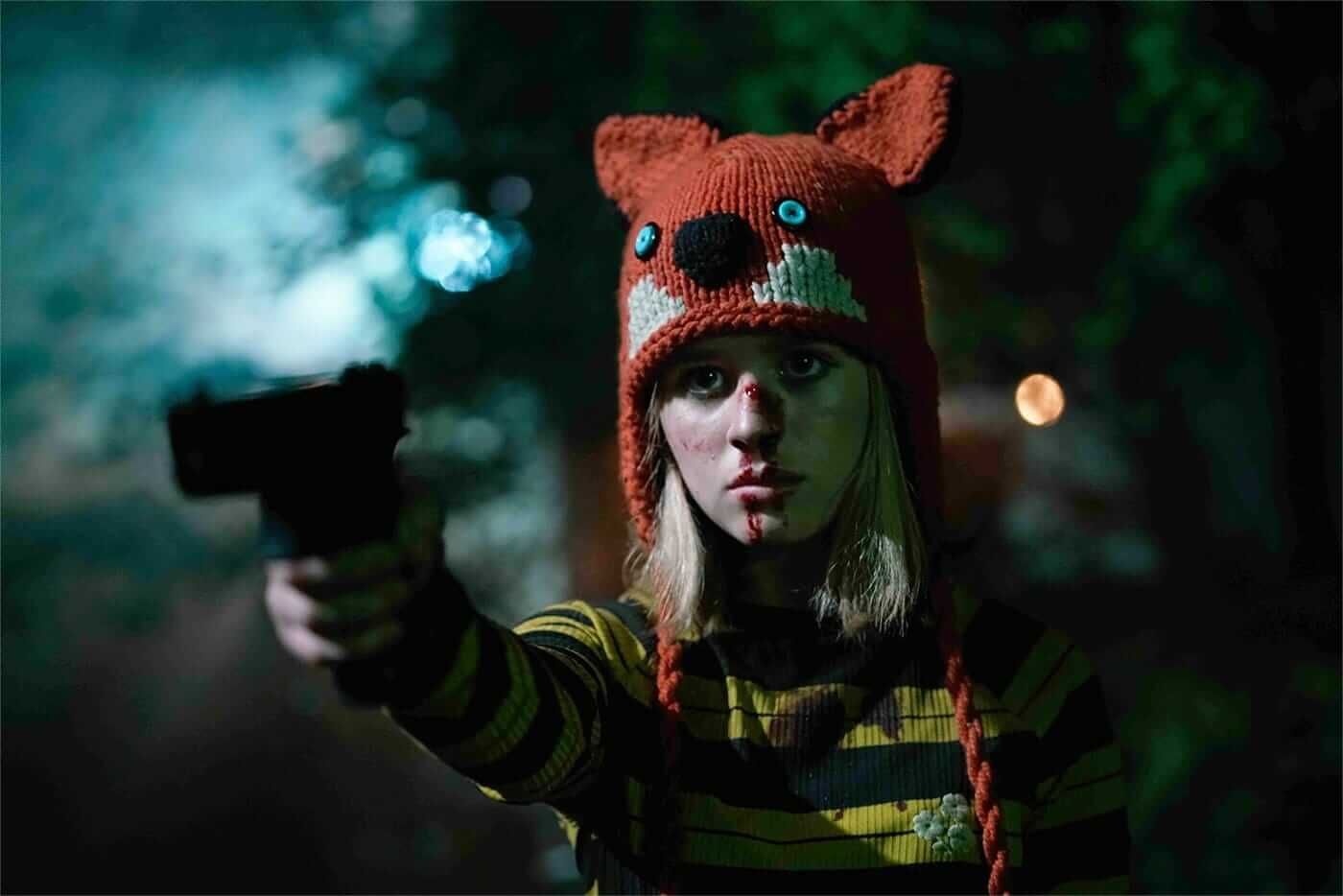 Becky sounds pretty basic on paper; the story is thin and unimaginative. Milott and Murnion acknowledge the shortcomings and make up for it with totally unexpected moments. A series of engrossing, wildly brutal setpieces — eyeball gouging and boat propeller mayhem are just some of the gory sights to look forward to — keep things interesting, too. There are plot points that are raised but never expanded upon (the key’s actual purpose, for instance). Also, Kevin James playing a white supremacist is amiss as the attribute never feels necessary to the overall narrative. Although details like that are worth noting, they don’t hurt the end result either.

On the whole, Becky is a well-paced and action-driven distraction with an unlikely hero. It’s a perfect vehicle for its two leads, who are certainly suited for these kind of out-of-the-box roles.

“Becky sounds pretty basic on paper; the story is thin and unimaginative […but] eyeball gouging and boat propeller mayhem are just some of the gory sights to look forward to…”

Becky is available at digital outlets now. Share your thoughts on the movie with the Nightmare on Film Street community on Twitter, in our Official Subreddit, or in the Fiend Club Facebook Group! TLDR Becky is a well-paced and action-driven distraction with an unlikely hero. A series of engrossing, wildly brutal setpieces keep things interesting, too. It's a perfect vehicle for its two leads, who are certainly suited for these kind of out-of-the-box roles.