Having not seen any promotional material whatsoever aside from a short synopsis, I really hadn’t a clue what to expect from Son other than solid acting from a sound cast list. What I didn’t expect was a brilliantly gut-wrenching performance I won’t soon forget. Despite pacing issues and a few wrong turns, Son finds it’s stride when guided by our lead’s outstanding portrayal of a mother pushed to the limit as her unspeakable past comes back out of the shadows.

Written and directed by Ivan Kavanaugh (The Canal), Son follows Andi Matichak (Halloween) as Laura and her young son David, played by Luke David Blumm (The King of Stanton Island). Balancing the workload of a single parent, Laura teaches grade school while also attending night classes about coping with trauma and its effects on children. Everything seems at peace until one night, when Laura goes to check on her sleeping son, she finds a clan of people standing in his room. Panicked, she races over to a neighbor’s house to call the police but returns to find David alone and sound asleep. The police arrive with detective Paul (Emile Hirsch, The Autopsy of Jane Doe) assuring her they will protect the family. The child, having no recollection of the home invasion, seems to be alright…at first.

Soon, David becomes gravely ill, vomiting blood and visibly decomposing from the outside in. Laura and Paul, who has stuck around at her request, rush David to the hospital, but the doctors can’t find any reason for the child’s sickness. They even go as far as to prepare Laura for the likelihood that her child might die. Without explanation, David miraculously recovers, and things go back to normal. But David soon relapses and as suspicious activity around her mounts, Laura reveals that she grew up in a pedophilic, demon-worshipping cult whom she believes were the suspected intruders. Paranoid that the group has done something to her son, Laura prepares to skip town, temporarily leaving him with a neighbor. She returns to find David has devoured his babysitter, seemingly satisfying his unrelenting hunger. As it turns out, human flesh is the only thing keeping her son alive, and Laura must decide how much carnage she will endure to save her child.

The motor that propels Son along is the mental tug-of-war we endure between Laura’s reality and the reality of everyone around her. As the audience, we have to accept one of two possibilities: either Laura is being gaslit by nearly everyone she interacts with, and every horrific thing that is happening is real, or she is suffering from psychosis resulting from her severe childhood trauma. Assuring we won’t get lost in the misdirection, director Ivan Kavanaugh drops bits of information throughout that we can trust as truth. For instance, and very importantly, we learn about Laura’s escape from the cult via a plethora of newspaper clippings the police uncover, and Paul informs her that no outside fingerprints were found in her son’s bedroom. We also see Laura have terrifying visions of demonic beings amid flashbacks of her time in the cult, but what we don’t know for sure is if these visions (and to a degree, what is happening to David) are just a psychological by-product of her horrific abuse. This guessing game really impeded my understanding of exactly what type of movie I was watching. Pedophilic cults are, unfortunately, very real in our societal history (see Children of God, Kidwelly, etc). At times I was convinced I was watching a powerfully tragic psychological story of a mother overcome by her past trauma, the psychosis driving her to do terrible crimes. Other times, I saw an equally tragic but much more paranormal story of Laura never truly escaping the demonic cult from her past, able to trust no one while trying to save her son from a fate she knows she cannot really prevent.

And therein lies the real treasure of Son – Andi Matichak. Her performance alone elevates this film into must-watch territory. Laura is a character with many complex layers. She’s a childhood victim of rape, an escapee of a heinous cult, a single parent who has overcome the trauma of her past to raise a son who resulted from the crimes she’s suffered, a loving mother who does anything she can to do what she believes will save her son from a treacherous death, and the list goes on. Matichak’s range to portray such a complex figure was clear-cut and truly impressive to watch from start to finish. In one particularly memorable sequence, we witness Laura’s acceptance that she cannot continue to murder to feed David, and this devastating realization is absolutely heart-wrenching to watch.

Aside from this standout performance, Son also boasts a pretty strong cast performance further down. Luke David Blumm’s portrayal of David should not be glossed over, as the child actor did a very admirable job in a position that is notoriously difficult and very visible when done poorly. The mother/son chemistry the two share never felt clunky or forced, a testament to both performers. Another performance that deserves recognition, even in a relatively minor role, is Blaine Maye’s bone-chilling portrayal of Laura‘s fellow cult victim Jimmy.

It is Matichak that guides Son through some pacing issues the film suffers early on. We don’t spend quite enough time with Laura and David before their lives really go to hell to fully appreciate the level of danger that finds them. At the same time, there’s serious whiplash going back and forth over David’s health before the film finds a steady pace when the two leave town. That said, director Ivan Kavanagh crafted some truly jarring scenes that caught me off guard, which is no small feat in the genre today. While it became clear the story would conclude one of two ways, I wavered back and forth between which one I believed would happen until the final scene spelled it out. Though I would’ve preferred the ending behind the hypothetical “door number two” rather than the one we are given, telegraphing endings is a surefire way to lose viewers’ interest, and Son had me engaged until the final shot.

“Despite pacing troubles, Son overcomes it’s hindrances with a memorable performance by Andi Matichak and enough originality to produce a compelling story.”

Despite pacing troubles, Son overcomes it’s hindrances with a memorable performance by Andi Matichak and enough originality to produce a compelling story. The film’s psychological depth combined with a claustrophobic evil made for a particularly grueling watch that will leave your mind reeling long after credits roll.

Ivan Kavanagh’s Son hits select theatres, On Demand, and digital on March 5th, 2021. Let us know what you thought of the film and how many strangers you would turn into supper for your demon child over on Twitter, Reddit, Facebook, and in the official Nightmare on Film Street Discord. Not a social media fan? Get more horror delivered straight to your inbox by joining the Neighbourhood Watch Newsletter. 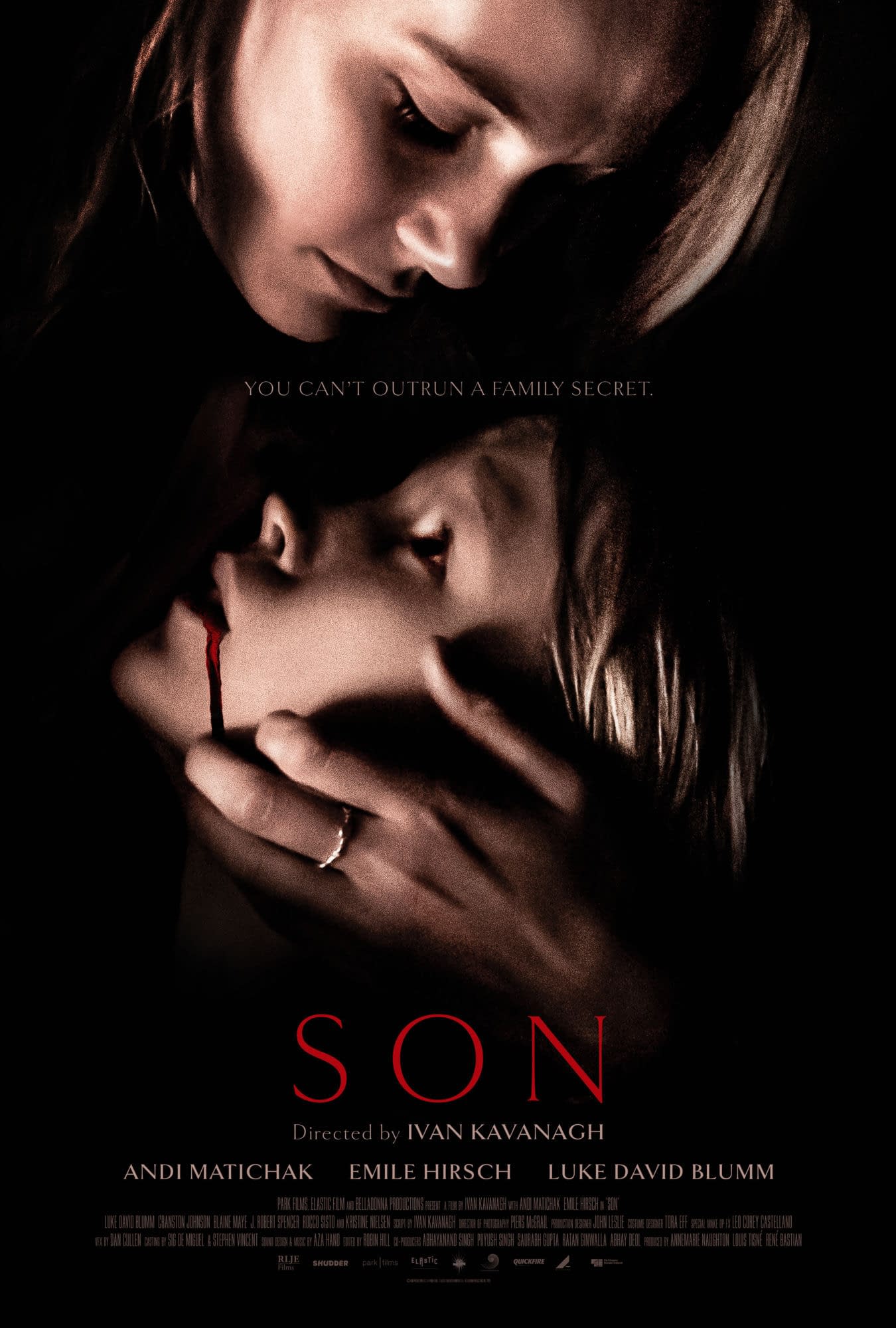 TLDR Despite pacing troubles, Son overcomes it's hindrances with a brilliant performance by Andi Matichek and enough originality to produce a compelling film until the very end. The psychological depth in the story and it's protagonist combined with the claustrophobic evil she seemingly can't escape make for a particularly grueling watch that will leave your mind reeling long after credits roll.