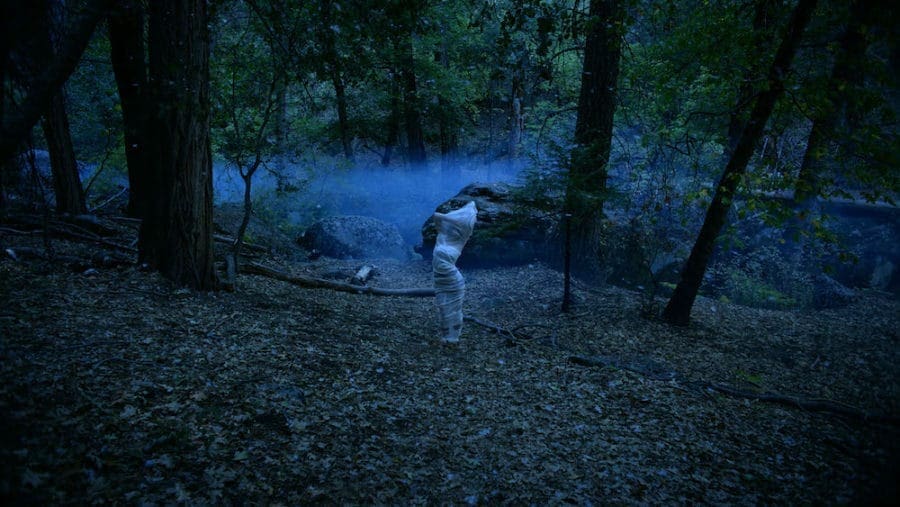 The ominous darkness, twisting trees, and dilapidated cabins of a forested wilderness have long been staples of horror. In fact, the “Cabin in the Woods” sub genre is arguably one of the most popular in all of horror. Seeing as we’ve had almost every iteration of forest-set thrillers, it would seem to be nearly impossible to have an original take on the genre. But The Axiom manages just that. The upcoming film is a creative little indie chiller and the promising film debut of writer/director Nicholas Woods.

The Axiom opens like many woodsy horror outings before, with a group of friends taking a road trip into the mountains. McKenzie (Hattie Smith) is on a mission to track down her sister, Marylyn  (Maria Granberg). Her sibling is an outdoorsy, adventurous girl who never failed to keep in touch with McKenzie during her past expeditions.

But McKenzie hasn’t heard from her sister since she embarked on a camping trip some time ago, and she’s worried. So she enlists her brother Martin (Zac Titus), and friends to accompany her on a roadtrip to track down her sibling.

After posting a craigslist ad requesting information, she is contacted by a mysterious man named Leon (William Kircher) who claims to know where Marylyn is. Now I don’t know about you, but venturing into the woods in pursuit of a missing person doesn’t sound like my idea of a fun friend outing. But who am I to judge? Martin’s girlfriend Darcy (Nicole Dambro), her brother Edgar (Taylor Flowers), and their wisecracking buddy Derrick (Michael Peter Harrison) apparently think it sounded like a good time.

Granted, McKenzie hasn’t told her friends that she read Marylyn’s journal. It contained some troubling and mysterious references to something her sister was searching for in the woods, — something called “the Axiom.”

McKenzie doesn’t believe any of the mysterious stuff she found in her journal. She remains skeptical even when she finally meets Leon and he claims that “the Axiom” is real and that it’s a doorway of some type hidden in the forest. She takes her friends to the closed park and rundown visitor’s center where Leon says she can find her sister. 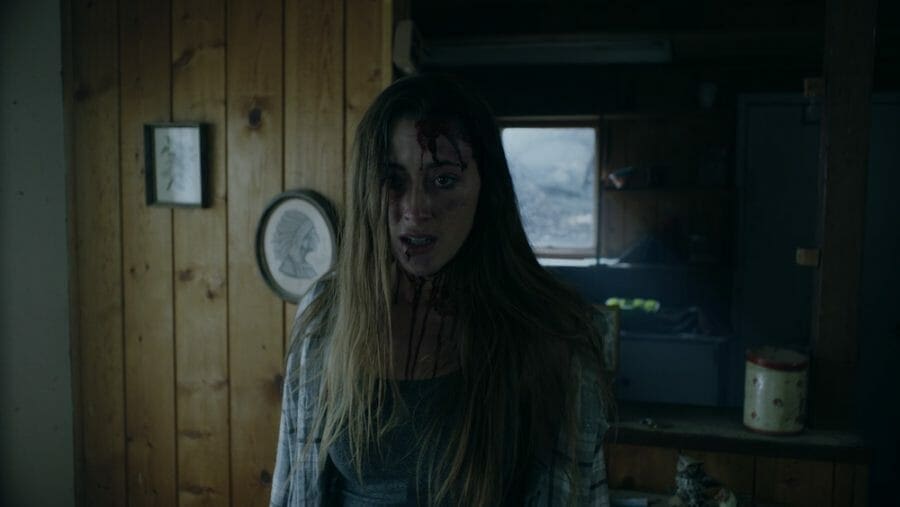 Upon entering the park, things take a turn for the eerie. They arrive late in the day, but the sun doesn’t seem to want to set. The abandoned visitor’s center seems frozen in the past. Soon, members of the group begin to see strange and frightening apparitions among the trees.

Woods is clearly a massive horror fan. He’s packed his debut with references that demonstrate his love for the genre. His influences range from The Shining, Friday the 13th, the work of Guillermo Del Toro, The Blair Witch Project, and more. But these nods serve to enrich the film rather than detract. They highlight how Woods took familiar premises and tropes of the genres and turned them into something original and unique.

The film also manages to be delightfully frightening despite it’s low budget. Practical effects are used to to extremely creative effect. Amy Blalock’s makeup work stole the show, pulling off scares that managed to haunt me long after the film. Woods uses deceptively simple effects to create haunting, nightmarish images and settings. They give the film a far more unique and uncanny look than more big budget horror films. Most of the scares take place in broad daylight, an uncommon setting that only serves to increase the unsettling atmosphere of the film.


The cast delivers some great work. Standout performances include William Kircher (The Hobbit trilogy) as the ambiguously threatening Leon, and Taylor Flowers as McKenzie’s friend Edgar. Edgar has bipolar disorder and has recently recovered from a breakdown. He is one of the first of the group to begin to see things in the woods, and he initially blames it on his mental health. Edgar’s character and disorder are treated respectfully and sympathetically, and his slow descent as the supernatural forces of the forest overtake him is one of the most emotionally affecting arcs of the film. 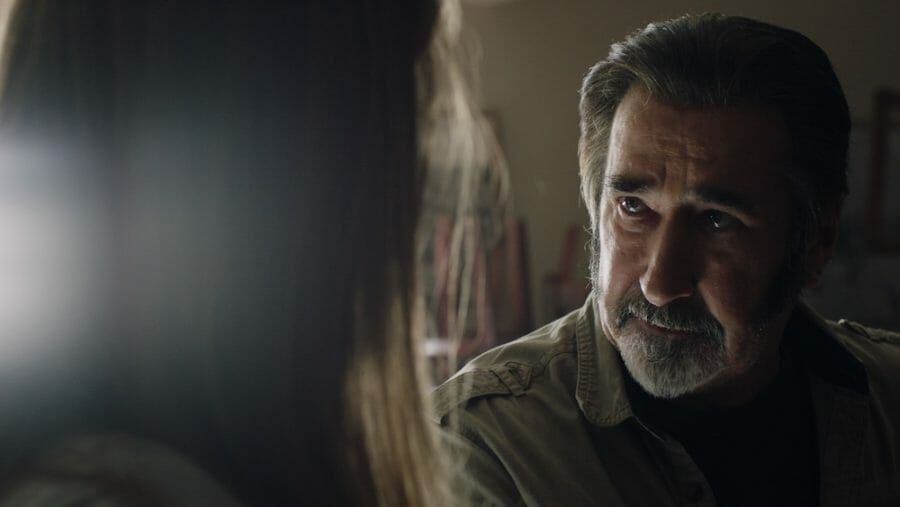 In fact, The Axiom takes great care to develop its characters and the emotional themes surrounding them. In particular, the film is about siblings; From McKenzie’s somewhat irrationally determined hunt for her sister, to her drifting relationship with her brother, to the heartbreaking rift of mental illness between Edgar and his sister, Darcy. Unfortunately, while these themes deliver some great acting and gut wrenching scenes, they don’t get the full focus in the script to really tie them all together with the larger story.

And this points to the primary shortcoming of The Axiom. For a low budget debut, the film is almost too original and ambitious to fully pull it off. A big reveal in the third act expands the world imagined by the story to an epic scale. Suddenly, unlimited horrors, characters, backstory, and lore are opend up to explore. But instead of going all in, the film leaves a ton of unanswered questions and wraps things up with a fast paced conclusion. With a runtime of only an hour and forty minutes, the film is well paced but left me wanting more.

I do understand that much of this is likely due to budget constraints. There is likely no way the film could have thoroughly explored the world building that Woods has come up with. So instead we got a slow burn chiller with a ton of creative ideas merely suggested throughout. Those suggestions are very effective, however. And when that conclusion does hit, we are treated to some gloriously weird and fantastical sequences. I was simply left a little unsatisfied.

But these understandable shortcomings are very much outweighed by the originality and daring of The Axiom. Considering this was his debut, Woods was not afraid to go all out with ideas, influences, themes and characters. If it gets a little too big for it’s britches at times, it makes up for it in its creativity and promise. I certainly intend to keep a close eye on the future of Nicholas Woods, and I think fellow horror fiends should do the same.

The Axiom  is produced by Phoenix Down Films and is set to be released in March of 2018. Information on festival appearances and screenings can be found here.