Tar has so many uses, especially in the construction of buildings and roads, so it’s about damn time it was used in horror. It’s black, it’s sticky, it has a distinct smell, and it can be scalding hot. Tar pits hold secrets from millions of years ago, as many prehistoric animals met a dark and gooey death drowning in them. Seems like the perfect breeding ground for an ancient evil spirit. Tar is a creature feature written and directed by Aaron Wolf, who also stars as the lead. The movie poster claims that the film is based on a true legend, though the only thing that comes up in a simple Google search is an episode of The Flintstones.

After operating for three generations, Zach Greenwood (Aaron Wolf) and his father Barry (Timothy Bottoms, The Shed) are forced to pack up their family business, as their office building is slated for demolition due to expanding construction of the Los Angeles subway. The office employees have exactly one night to put everything into boxes and vacate before 6 AM the next day. But there’s a few bumps in the road. First, there’s Zach’s best friend and manchild Ben (Sandy Danto, Funny Fat Guy), who doesn’t want to do any heavy lifting, only ogle the female workers. Then, Zach’s girlfriend Rose (Emily Peachey, The Fault in Our Stars) shows up to offer emotional support, which actually means getting it on in the supply room. Next, the power goes out, possibly knocked out from all the underground construction, so the employees now have to pack in the dark using flashlights.

The whole operation is already moving at a snail’s pace, but it all comes to a screeching halt when all the digging and demolition awakens a primordial beast living deep within the nearby La Brea Tar Pits. The monster crawls up from the underground, looking to punish those who disturbed his slumber.

“Tar had the potential to be fun, and it can still be fun if you ignore its massive flaws.”

Tar goes all-in with exposition, as if such a concept needed an in-depth explanation. The opening title sequence pans over newspaper headlines detailing unexplained murders near the La Brea Tar Pits. It’s followed by a cave painting animation on the origin of the tar pit, and the Native peoples’ discovery on an evil spirit living in them, which they named Matchi Manitu. The story is narrated by seasoned indigenous actor Graham Greene (The Green Mile), who plays a homeless man telling legends in exchange for quarters outside the tar pits. Throughout the film are close-up scenes of Zach in an interrogation room following the aftermath, visibly traumatized and stained with blood and tar, recounting the events of that night. On top of that, there are flashbacks of Barry and his father, who had to fight off the beast more than fifty years ago, because it only has it out for the same mom and pop business.

What makes Tar special are the relationships between the characters. Zach and his father are constantly at each other’s throats, not just over the state of the company, but there’s some indication that something happened to Zach’s mother, and they have unresolved issues over it. When talking to his father, Zach acts like angsty teenager, which can be incredibly annoying. Marigold (scream queen Tiffany Shepis, Victor Crowley) is by far my favorite character. She’s very immersed in New Age spirituality; she reads astrology, she carries a pack of tarot cards, and she makes decisions purely based on psychic intuition (sometimes proving to be fatally wrong). She has a special platonic friendship with Ben, in the same way a babysitter would. Ben is a lot more interested in the busty accountant Diana (Nicole Alexandra Shipley, All Saints Eve), who struggles to be seen as an intelligent human being, since everyone, including her assistant Carmenia (Dani Fernandez), stares and salivates every time she bends over.

The actors do their best with the script they have, but some of the dialogue so horrendous that it felt like I was watching an intentional parody. One particular moment that’s cringe-inducing is when Ben tries to coax Diana into kissing him in the unlikely event that he saves her life. I just hoped both their deaths came quick and soon so that wouldn’t have to happen. Most of the comedy plays well, but almost all of the serious segments come off as melodramatic. Other lines are thrown in to explain away massive plot holes. The story was made way more convoluted than it needed to be, in an attempt to make it more intelligent than your average monster flick.

Tar is a lot like Jaws, in that the monster goes unseen for most of the movie. Its arrival is ushered by the presence of tar, seeping under doors or dripping from the ceiling. We get to see some gruesome kills, though the monster is still off-screen in those moments. At times, we only get to see shots of the beast from behind, or a close up of its claw, dripping with tar. Even when the 7-foot tall humanoid beast is finally revealed near the end, it’s still hard to make out in the dark, with its skin covered in a pitch black oily coat, safe for its one glowing eye.

For a low budget production, the sound design is impressive. The foley artist did a great job providing the squishy and bubbling sound of the tar. Since the tar monster has origins in Native American lore, traditional drums and indigenous singers were employed to create a foreboding soundscape whenever the monster is near. The team also had to get creative with the lighting design. A lot of the action takes place in the dark. At the beginning, we see the monster’s lair, deep in the underground tunnels and in the sewers, with slightest bit of light coming from the holes in the manhole cover. The office scenes are bathed in a cold blue, so whenever a flashlight is used, it’s almost blinding in contrast

Tar had the potential to be fun, and it can still be fun if you ignore its massive flaws. The appeal for movie-goers would be to see the Man of the Tar in all its gooey glory, but in order to get there, they’ll have to trudge through a thick cesspool of unbearable dialogue and unnecessary explanations. And when they finally get to the kills, they might be disappointed by the PG-13 violence. Let’s just hope the drive-in experience doesn’t include a scratch-and-sniff card.

Tar comes to theatres and drive-ins starting October 2nd, and will be available on Digital and On Demand on October 20th through 1091 Pictures. Let us know what you thought of the film, and tell us all about your favorite creature-features over on Twitter, in the Nightmare on Film Street Subreddit, and on Facebook in the Horror Movie Fiend Club! 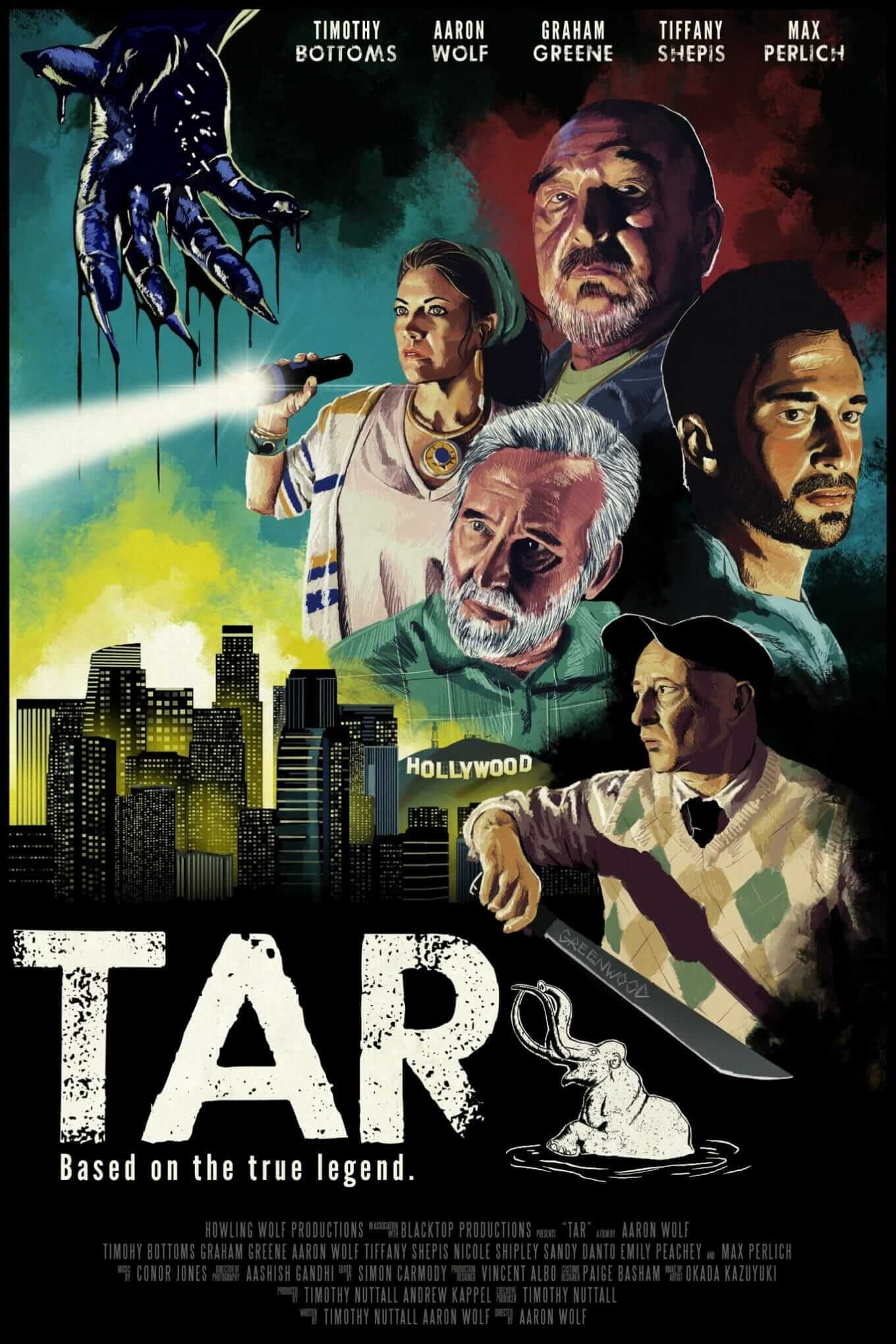 TLDR Tar had the potential to be fun, and it can still be fun if you ignore its massive flaws. The appeal for movie-goers would be to see the Man of the Tar in all its gooey glory, but in order to get there, they’ll have to trudge through a thick cesspool of unbearable dialogue and unnecessary explanations. And when they finally get to the kills, they might be disappointed by the PG-13 violence. Let’s just hope the drive-in experience doesn’t include a scratch-and-sniff card.