[Sitges 2019 Review] Don’t Open The Door! There’s A Vampire in THE SHED 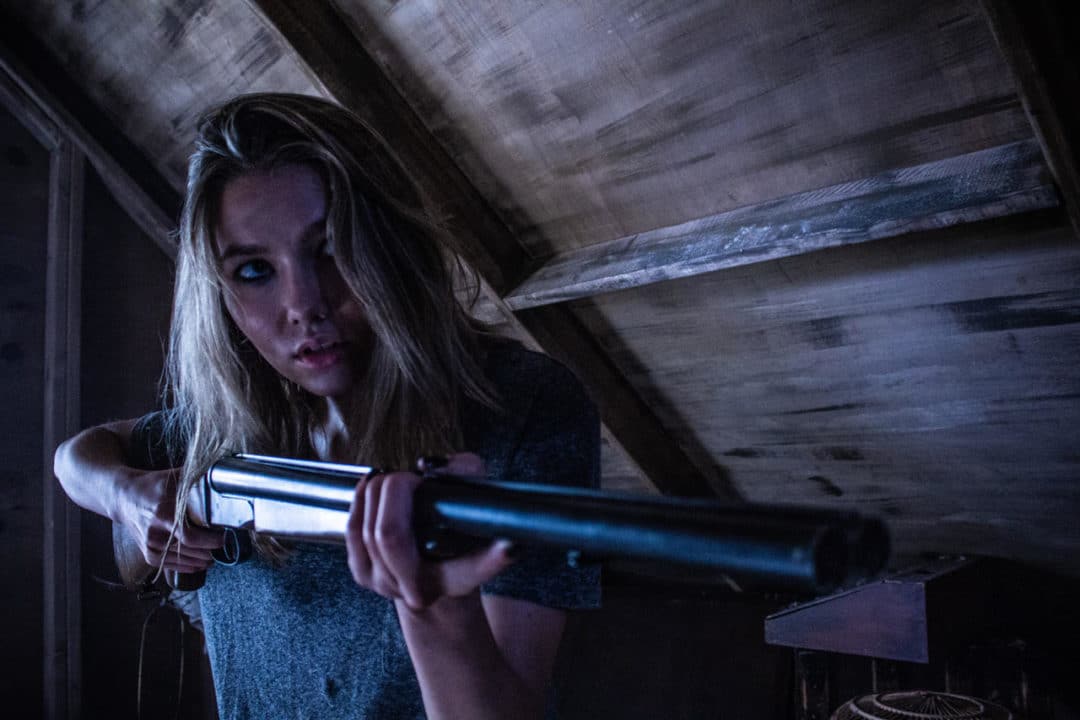 Vampires have gotten a bad rap as of late. The iconic monster of horror media seems to have fallen out of vogue, and its stories drained of all life or inspiration. I, a devout fan of all vampire media, despaired that there would never be a comeback for the eternal bloodsuckers. But, with Frank Sabatella’s (Blood Night: The Legend of Mary Hatchet) new film, The Shed, the vampire may be moving into a renaissance. In his second feature film, Sabatella delves into trauma—horror’s favorite subject—through the lens of a bullied teen who discovers there’s a vampire living in his shed.

The Shed opens with a borderline-cheesy scene of Stan (Jay Jay Warren, Bosch) and his parents on a Saturday morning. They’re laughing, eating pancakes, and reveling in a bright sunny day. It feels overly saccharine until it’s revealed it’s all a dream. In reality, Stan is alone, living with his abusive grandfather (Timothy Bottoms, The Last Picture Show) after the death of his parents. He is empty, angry, and frustrated. He is bullied at school and his only solace is drinking cheap beer with his best friend Dommer (Cody Kostro, Worst Friends).

“….a delicate balance between teen angst in a small town and coping with their own personal traumas.”

When Stan goes to mow the lawn one day, he discovers a vampire has shacked up in their dilapidated shed. Naturally, Stan has no idea what to do, and it all begins to spiral out of control. This vampire is then wielded as a weapon of sorts, devouring Stan’s bullies and seemingly removing all of his troubles. But it isn’t so easy to explain why so many people keep disappearing behind his house.

Stan is a deeply traumatized kid who, as the local sheriff says, just can’t catch a break. When he isn’t having nightmares about his dead parents, he’s getting verbally abused by his drunk grandpa or pushed around by school bullies. You feel awful for Stan and just want to give him a hug. He isn’t a particularly bad kid, he’s just angry, but who wouldn’t be in this situation? There’s no escape in sight for him until he discovers the vampire. While Stan may not want to actually get violent with anyone, the vampire acts out those violent impulses. The creature becomes a manifestation of Stan’s subconscious, consuming those who have tried to hold him back. The vampire of The Shed is not pretty. He has shark-like teeth, similar to the vampires of 30 Days of Night, and his cheekbones protrude out. His eyes glow orange, and while he appears vaguely humanoid, there is nothing human left in the creature. Sabatella never tries to delve too deeply into lore. The film opens with a man being transformed into a vampire and he runs into the shed. Where that vampire came from is never explained. We do learn that this was once Stan’s neighbor who was trying to find the animal eating all of his rabbits. Well, he found the source and then some.

Until the film’s final act, the beauty of The Shed lies in its quick yet brutal moments of violence. The vampire is used effectively as a beast that hides in the shadows. You never get a full glimpse of him, which adds to the mystery and tension. However, the film’s end devolves into a cheesy teen horror movie that removes that tension and replaces it with nonstop vampire action. It feels like the ending to an entirely different movie, complete with a romance that seems to come out of left field. It seems that Sabatella wanted to deliver a bloody and action-packed climax, which is admirable, but seems so out of place in a film that paced itself in terms of violence.

“The Shed suffers from an outlandish third act and issues with pacing, but proves that there are still vampire stories to be told.”

The Shed made me aware of my least favorite horror trope: when a character stops in the middle of the action to examine photos or other pieces of nostalgia. In the film’s final battle, love interest Roxy (Sofia Happonen) stops her search for vampires to look at photos of her and Stan at a school dance. She smiles, seeming to relish in the memories, all while the rest of the characters are either fighting off vampires or looking for them. I’m all for moments of emotional depth, but in the middle of the climax? There will be other times to reminiscence. For now, focus on the fanged monsters that are out to kill you.

The Shed suffers from an outlandish third act and issues with pacing, but proves that there are still vampire stories to be told. These stories don’t have to be sexy. In fact, they can be gruesome, with the vampires morphing into something between human and bat, with massive teeth and protruding cheekbones. The film’s biggest strength is its young cast that portrays a delicate balance between teen angst in a small town and coping with their own personal traumas. The Shed takes an iconic creature and instead of focusing on it, uses it as a tool to discuss the traumas we face growing up.

The Shed had its world premiere on Friday, October 4 at the Sitges Film Festival. What’s your favorite vampire movie? Let us know on Twitter, Reddit, and in the Horror Fiends of Nightmare on Film Street Facebook group!

TLDR The Shed suffers from an outlandish third act and issues with pacing, but proves that there are still vampire stories to be told. These stories don’t have to be sexy. In fact, they can be gruesome, with the vampires morphing into something between human and bat, with massive teeth and protruding cheekbones. The film’s biggest strength is its young cast that portrays a delicate balance between teen angst in a small town and coping with their own personal traumas. The Shed takes an iconic creature and instead of focusing on it, uses it as a tool to discuss the traumas we face growing up.