The origins of evil are exposed (sort of) in Orphan: First Kill, from The Boy director William Brent Bell. While Jaume Collet-Serra’s 2009 shocker Orphan is not required viewing, this new addition to the Esther cinematic universe is very upfront about what made that first installment so surprising, so maybe best to give that one a watch if you’re only hearing about it now.

Reprising her role as the adult-in-a-child’s-body murderer Esther is Isabelle Fuhrman (The Last Thing Mary Saw) who has really gone through the looking glass with this prequel. Originally a 10-year-old playing a 30-year-old killer, Fuhrman is now in the reverse position of having to play the younger side of this deadly con job and through makeup, post effects, and trick photography is terribly convincing. Based solely on Fuhrman’s performances, Orphan and Orphan: First Kill makes for an interesting double bill. Storywise, however, Orphan: First Kill fails to deliver a surprising left hook despite attempts to land a real knockout punch. The phrasing “First Kill” in this prequel’s title is also an interesting choice. Naturally, as a prequel, the film wants to take you back to Esther/Leena’s origins, but there could even be a prequel to Orphan: First Kill highlighting the where and why of what made this pint-sized killer tick. When we first meet Leena, she is locked up in a Russian prison. The warden of the prison explains that Leena is a skilled con artist that embeds herself in unsuspecting families, posing as a lost child in need of help. After gaining access to the family’s home she robs them blind and disappears into the night.

For reasons the authorities can’t explain, she brutally murdered the last family she conned, but that’s not the “first kill” First Kill is referring to. Instead, Orphan: First Kill follows Leena after she makes a daring escape from prison and assumes the identity of a missing American Girl names Esther Albright. While this is somewhat midway through Leena‘s criminal journey, her stay with the Albrights is the inception of her Esther persona and the solidification of the serial killer pattern we came to know in 2009’s Orphan.

Esther’s weakness is love, and her attempts to find love as a woman while impersonating a child are always her downfall. It’s through that yearning and some other outside factors that Esther finds herself unable to leave the Albrights. The appeal in any prequel like this is learning about the origins of your pre-established villain or seeing how they make it out of an impossible trap to kill another day. Esther, unfortunately, didn’t really need any further elaboration. Everything you needed to know about her was in that first movie. And as far as impossible traps go Orphan: First Kill pins Esther between more of a rock and a soft place.

The Albrights aren’t quite what they seem but they’re light work for a sadistic mastermind like Esther. Tricia Albright, played by Julia Stiles (Dexter) is the biggest roadblock between her and her dream man/adopted father. The cat and mouse game between them both is fun but for a variety of reasons, it’s never as high stakes as it would like you to believe it to be. 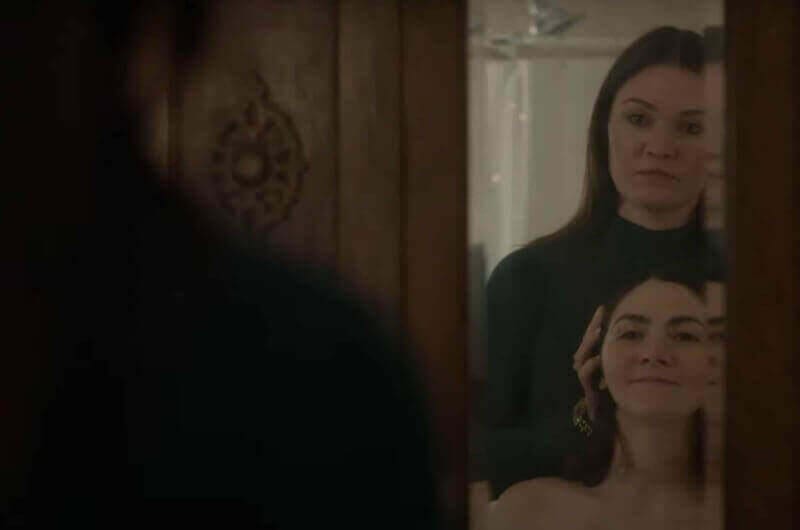 Orphan: First Kill is a perfectly serviceable prequel, and that’s thanks in large part to Isabelle Fuhrman’s performance. Without Fuhrman, the film has the air of a Lifetime Channel thriller. Fans of the original Orphan will appreciate the surprise this story has up its sleeve but despite trying to keep a familiar villain fresh, Orphan: First Kill falls into the same overworked template that claims so many horror prequels. It’s working to a conclusion that’s out in the wide open and it fails to do much more than remind you of something you already enjoyed. If film reviews were written by the Amazon shopping algorithm, this page would simply read: Customers who purchased Orphan (2009) also purchased Orphan: First Kill (2022). Add to cart?

TLDR 3 good things about ORPHAN: FIRST KILL 1. Julia Stiles drink a smoothie with a dead rat in it. 2. Neon-lit murders under the glow of blacklight 3. Isabelle Fuhrman is through the looking glass, playing the adult version of the "child" killer that introduced her to the world