Sacrifice (2021), written and directed by Andy Collier and Toor Mian, takes a subtle approach to slow-burn folk horror in the vein of The Wicker Man (1973), Midsommar (2019), and Apostle (2018) with a Lovecraftian theme. Eldritch horror fans will recognize that Lovecraft was himself a pioneer of the genre, penning tales such as The Shadow Over Innsmouth, which follows the same structure. However, fans will also be quick to point out the inherent xenophobia present in Lovecraft’s writing. Rather than ignore it, Sacrifice leans into the issue and explores xenophobia from different perspectives.

Sacrifice follows young couple Isaac (Ludovic Hughes) and his pregnant wife Emma (Sophie Stevens) as they travel to a secluded Norweigian island village where Isaac was born. Having inherited his mother’s old house, Isaac and Emma hope to sell the home and return to America. Shortly after arriving, the couple goes to a local bar hoping to purchase a meal. Apparently, a meal is a lot to ask as the barkeep is immediately hostile towards the couple, taunting them for being American, or at the very least for not being Norweigian. Isaac stands his ground and demands service, but it’s not until Emma reveals Isaac’s last name and birthplace that the barkeep and patrons change their tune. It’s an exciting shift in perspective as the new arrival is commonly the xenophobic one in the folk horror genre. Sure, the villagers are typically wary of outsiders, but it isn’t often that they cite the outsider’s specific nationality when making their aggressions.

“Sacrifice is a slow-burn, Lovecraftian folk horror film with a subtle approach.”

Soon, Isaac is enamored with the small village and its culture after a night of drinking. However, Emma is not convinced and suffers a disturbing nightmare. The following day the couple meet Renate, the local sheriff played by the legendary Barbara Crampton, who invites them to dinner. It’s during this dinner that we see xenophobia from yet another perspective.

Upon arriving at Renate’s house, the couple sees what appears to be a scarecrow in the front yard. Emma comments on its eeriness before meeting Renate’s daughter Astrid at the door. Johanna Adde Dahl plays Astrid in her debut role, whose striking features give the character an otherworldly appearance. Throughout the dinner, Emma makes several insensitive comments starting with insulting the “scarecrow.” Renate explains that it is not a scarecrow but a tribute to her late husband, a village custom. Perhaps worse than the initial insult, Emma does not seem particularly remorseful for her less-than-tactful comment. She then asks about an ancient-looking piece of art above Renate’s mantel, and again Renate kindly explains the folklore behind a “slumbering one” who watches over the village. (Cthulhu?) Rather than recognizing that this story is obviously meaningful to the town, Emma jokes that he should be called the “lazy one,” instead, to which Astrid looks horrified. This scene is important not just because it shows Emma’s ignorance or lack of empathy towards another culture but also because it contrasts Renate’s patient response with the unwarranted hostility the couple experienced in the bar. Essentially, the scene shows that the villagers are not a monolith and should not be generalized. The commentary on xenophobia continues throughout, but I will hold off on the analysis and let the audience experience it themselves.

With that said, Sacrifice is a solid Lovecraftian film. The references to underwater deities and the horrific nightmares are straight out of cosmic horror literature. We even see a few Cthulhu idols in the local shop! Nonetheless, the most well-constructed eldritch horror of the film is the dreams. They come without warning and left me guessing whether it was a dream or not. As the film progresses, the nightmares become more realistic while reality becomes more dreamlike. It’s an accomplishment for a movie to blur that line without extended trippy sequences or hallucinogenic special effects. 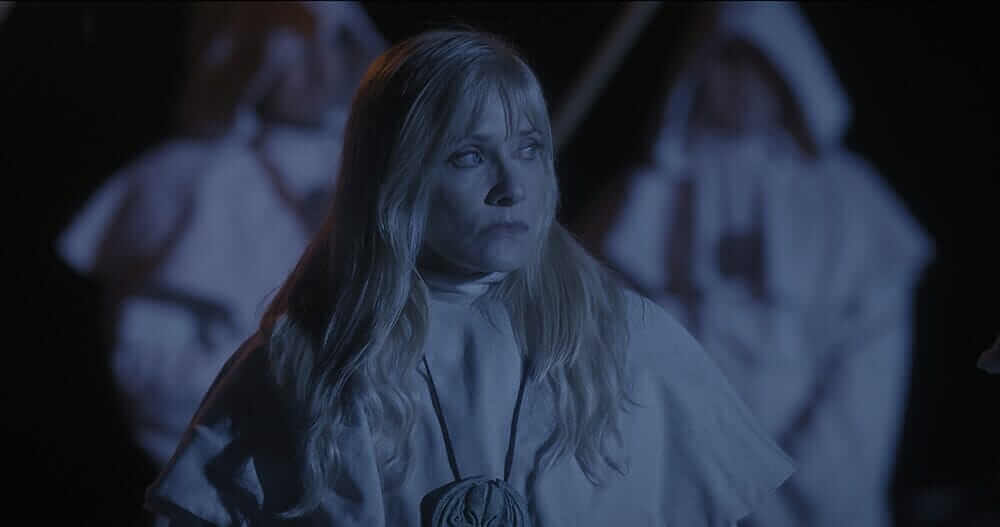 Shot on location in Norway, Sacrifice is aesthetically beautiful. The constant fog during the day accurately portrays the land’s mystique, and the night scenes where the pitch black of the moors is only broken by the Aurora Borealis are striking. Its success, however, is mainly due to the acting. Both Sophie Stevens, Emma, and Ludovic Hughes, Isaac, play their roles perfectly. Throughout the film, their interactions as a married couple are incredibly believable, and the audience can feel the frustration and love between the characters. The supporting cast is equally impressive, creating an atmosphere of unease, keeping the audience guessing who to trust. Of course, Barabara Crampton is a standout, adopting a Norweigian accent for the film. A scene where she reveals an important detail about Isaac’s father is particularly compelling, and Renate’s reaction foreshadows what’s to come.

Perhaps what I appreciate most from Sacrifice is its portrayal of the pagan cult. So often, folk horror vilifies the cultists. Duh, they’re the antagonists! But it’s refreshing to see a more nuanced approach. The cultists are not just cartoonishly evil or blindly faithful. Even in films where the cultists are somewhat sympathetic, their fanaticism makes them unrelatable. Sacrifice takes a different tact by showing us cultists who are genuinely empathetic. Except for perhaps one cultist who marvels at the rituals, they are level-headed and have a reason to believe. In fact, this is part of the reason why Isaac is so captivated. Giving them motivation and compassion makes these cultists the most realistic this reviewer has seen!

Sacrifice is not without faults, however, and the film suffers from some slow pacing. While the slow-burn eventually pays off, I can’t help but think that the movie could have done more with the time allotted. With a runtime of only 87 minutes, one would expect the film to move quickly, but instead, it crawls before it walks and never seems to get enough momentum for a run. Fans of slow-burn horror will find the film entertaining enough as it has a lot to say, but those expecting a ride like Wicker Man or Apostle may be disappointed.

Sacrifice is a slow-burn, Lovecraftian folk horror film with a subtle approach. Top tier acting and surreal atmosphere drive the movie, but its slow pacing may be too much for some viewers to overcome. If you enjoy the folk horror genre and want a film with a darker atmosphere than that of the sunny Wicker Man and Midsommar, Sacrifice is the film for you!

Sacrifice opens in select theaters on February 5 and On Demand on February 9, with a Blu-ray release through Dread Releasing and Epic Pictures on February 23. Will you be watching Sacrifice when it releases? Are you excited to see Barbara Crampton in a new role? Let us know over on Twitter, Reddit, Facebook, and in the official Nightmare on Film Street Discord. Not a social media fan? Get more horror delivered straight to your inbox by joining the Neighbourhood Watch Newsletter. 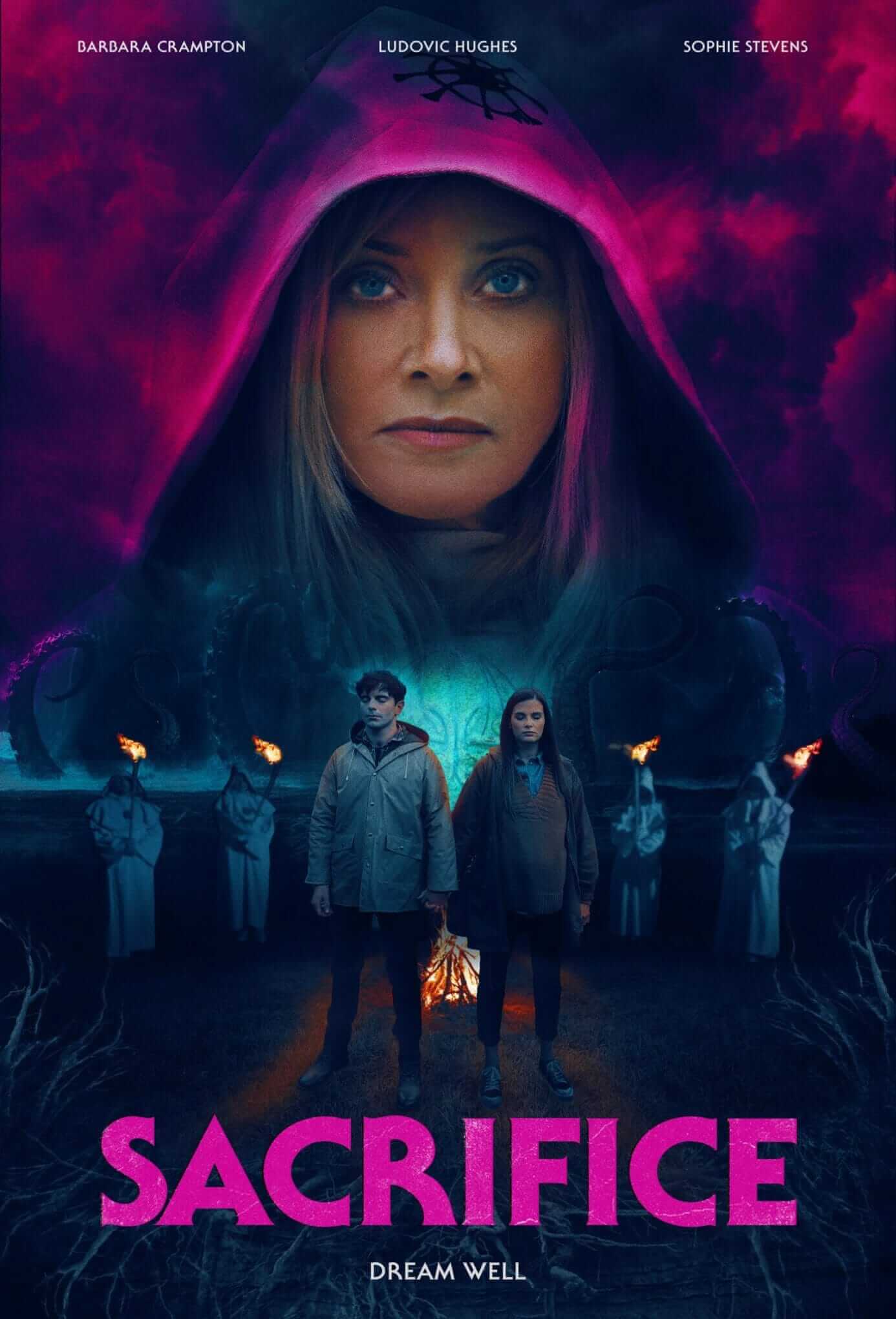 TLDR Sacrifice is not without faults, however, and the film suffers from some slow pacing. While the slow-burn eventually pays off, I can't help but think that the movie could have done more with the time allotted. With a runtime of only 87 minutes, one would expect the film to move quickly, but instead, it crawls before it walks and never seems to get enough momentum for a run. Fans of slow-burn horror will find the film entertaining enough as it has a lot to say, but those expecting a ride like Wicker Man or Apostle may be disappointed.