[Review] GET DUKED! is A Satirical British Horror That Takes Shots at the Generational Gap

The “us versus them” mentality is well and alive in Get Duked!, an effervescent gem from across the pond. Originally titled Boyz in the Wood, Ninian Doff’s debut feature follows a waged war between two very different generations.

Get Duked! centers around school lads being rounded up for the Duke of Edinburgh Award, then set on an outdoor challenge where said youths must hike across a portion of the Scottish Highlands. All seems well enough for the teens until a stranger in the distance opens fire. The danger doesn’t end with that one marksman, either — this is only the beginning of what is really a greater threat.

“Based on its merits as a comedy, Get Duked! is reasonably fun so long as you enjoy the works of Edgar Wright.”

Before getting into the meat of this merry lil’ movie, we acquaint ourselves with the stars. The story begins with a three friends — Dean (Rian Gordon), Duncan (Lewis Gribben), and William a.k.a. DJ Beatroot — watching an informational video about the Duke of Edinburgh Award with total disinterest and no awareness of what’s to come. By no coincidence, all three candidates are juvenile delinquents: Dean is prone to arson, Duncan is impulsive to a fault, and DJ Beatroot is too impressionable for his own good. Rounding out the applicants is Ian (Samuel Bottomley), a random boy who actually volunteered for the exercise in hopes of accomplishing the three main tasks at hand: teamwork, foraging, and orienteering.

Soon after they’re checked in at the starting point by their teacher Mr. Carlyle (Jonathan Aris), the four boys quickly learn about the sinister purpose of the challenge. One masked man among a larger group called The Dukes is carrying out an age-old tradition — hunting chosen miscreants for sport. Having narrowly escaped their would-be attacker, the candidates become rightfully paranoid about who else is a potential Duke; even their teacher can’t be completely ruled out. From there, this tetrad of troublemakers is chased by the ancient order of huntsmen all across the Highlands until they finally take a stand. 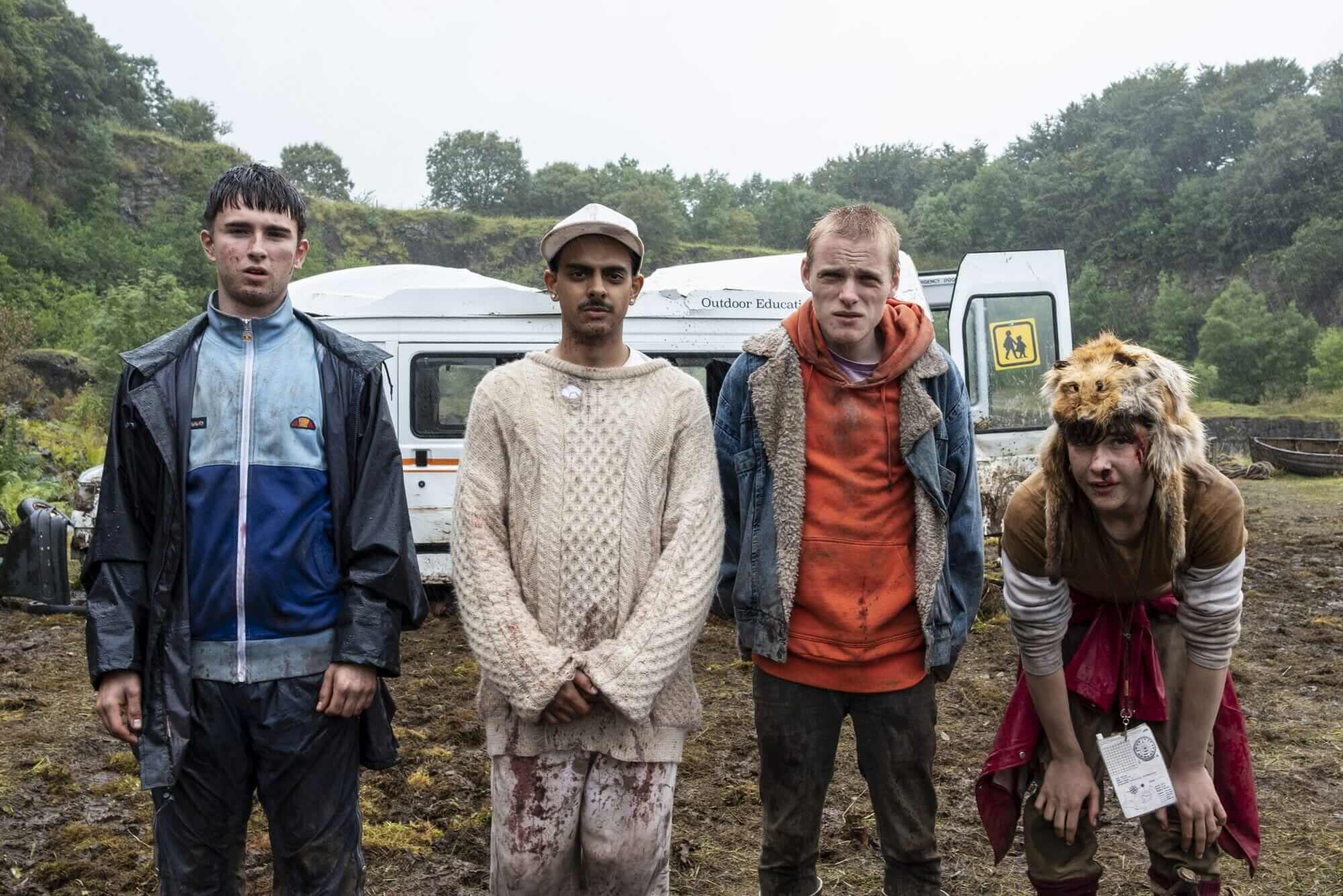 Not everyone agrees horror and comedy mesh well together, but cinematic history claims otherwise. Shaun of the Dead and Tucker & Dale vs. Evil are paragons when arguing the advantages of adding humor to terrible, otherworldly situations; Ready or Not recently lampooned privilege with a witty approach. In relation, Get Duked! does something similar with its story. Three out of the four protagonists are without a doubt regarded as nuisances whose existences are expendable. They are “treated” to this real-life reenactment of “The Most Dangerous Game” where the wealthy take pleasure in purging society of who they deem undesirable. The Dukes aim to impose their antiquated and unjust values on a younger generation that is at a great disadvantage because of them. Now, that’s a rather heavy topic in any other genre movie, but thanks to Doff’s sardonic slant, the message goes down more smoothly without any sort of aftertaste.

The film’s horror elements are assuredly motivated by real-world matters. The masked villains are haughty stand-ins for that side of the generation gap that tells children to mind their elders even when they’re trying to oppress, or worse, kill them. While the Dukes‘ execution methods have been successful in the past, it stands to reason they weren’t equipped for a group as subversive and scrappy as Ian and his newfound friends. Both sides indeed act like caricatures — one whose core values are now deemed dangerous, the other is fed up with their future being decided without their input  — but that kind of creative license opens the door for conversations at home. 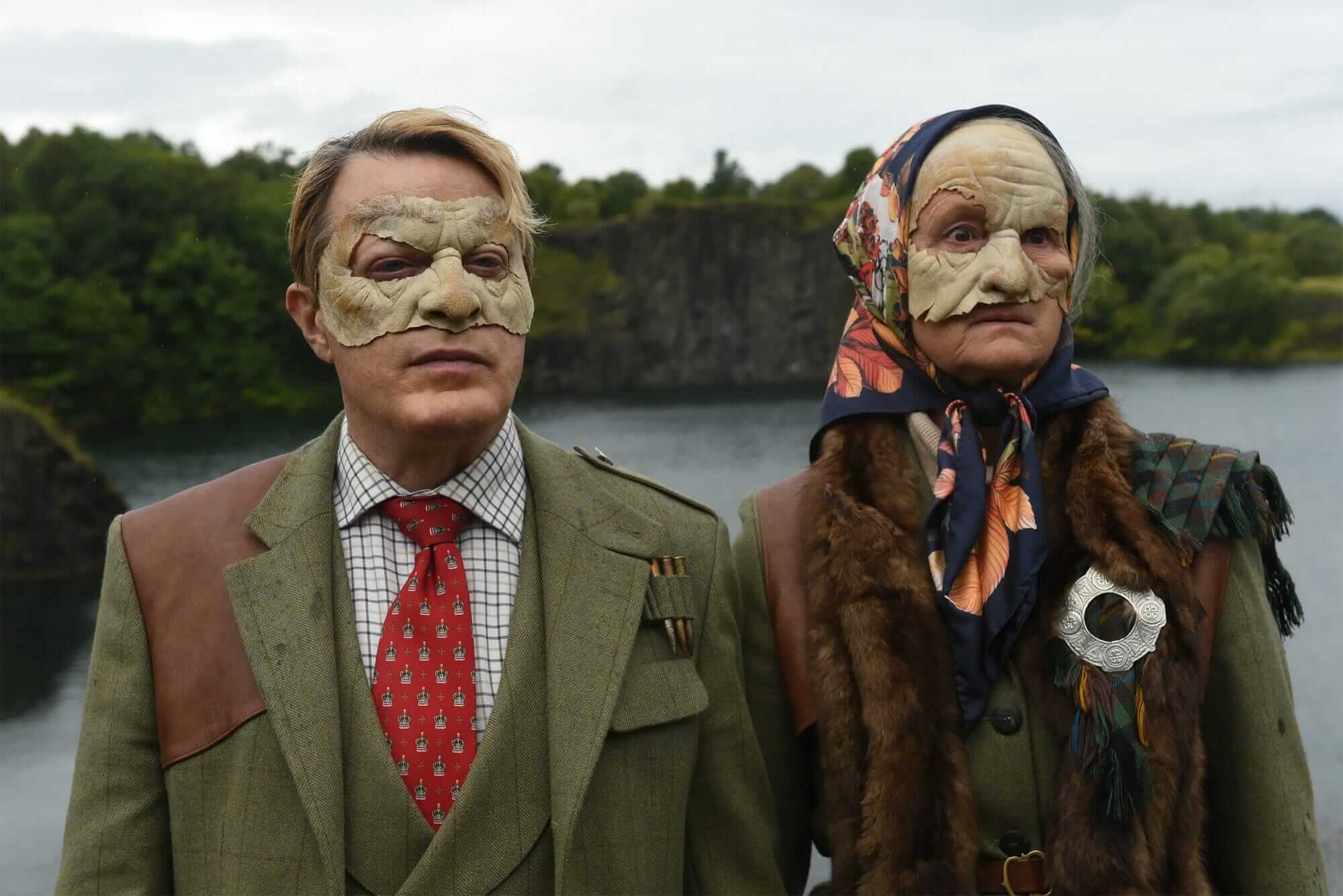 Based on its merits as a comedy, Get Duked! is reasonably fun so long as you enjoy the works of Edgar Wright. The obnoxious characters are still worth rooting for because you can identify with them on a basic level. Yes, the lot of us have moved past the need for their antics in our own lives, but that doesn’t mean we can’t still have a laugh at their and everyone else’s expense. Whether it be someone hastily running an adult down with a van — I dare say, this is easily the movie’s best and most unexpected sight gag — or the local, bumbling police questioning if terrorism supersedes bread theft, the movie delivers sincere mirth at every turn.

Get Duked! is a kinetic comedy with sharp derision running through its peeved veins. The soundtrack is boisterous, and the no-holds-barred humor hits the mark almost every time. There are moments where the story is distracted by its very own cleverness, but the overall picture feels fresh and relevant. An animated satire apropos of this quality and efficacy is well worth experiencing.

“Get Duked! is a kinetic comedy with sharp derision running through its peeved veins.”

Get Duked! is now available on Amazon Prime Video. Share your thoughts on this movie with the Nightmare on Film Street community on Twitter, in our Official Subreddit, or in the Fiend Club Facebook Group! 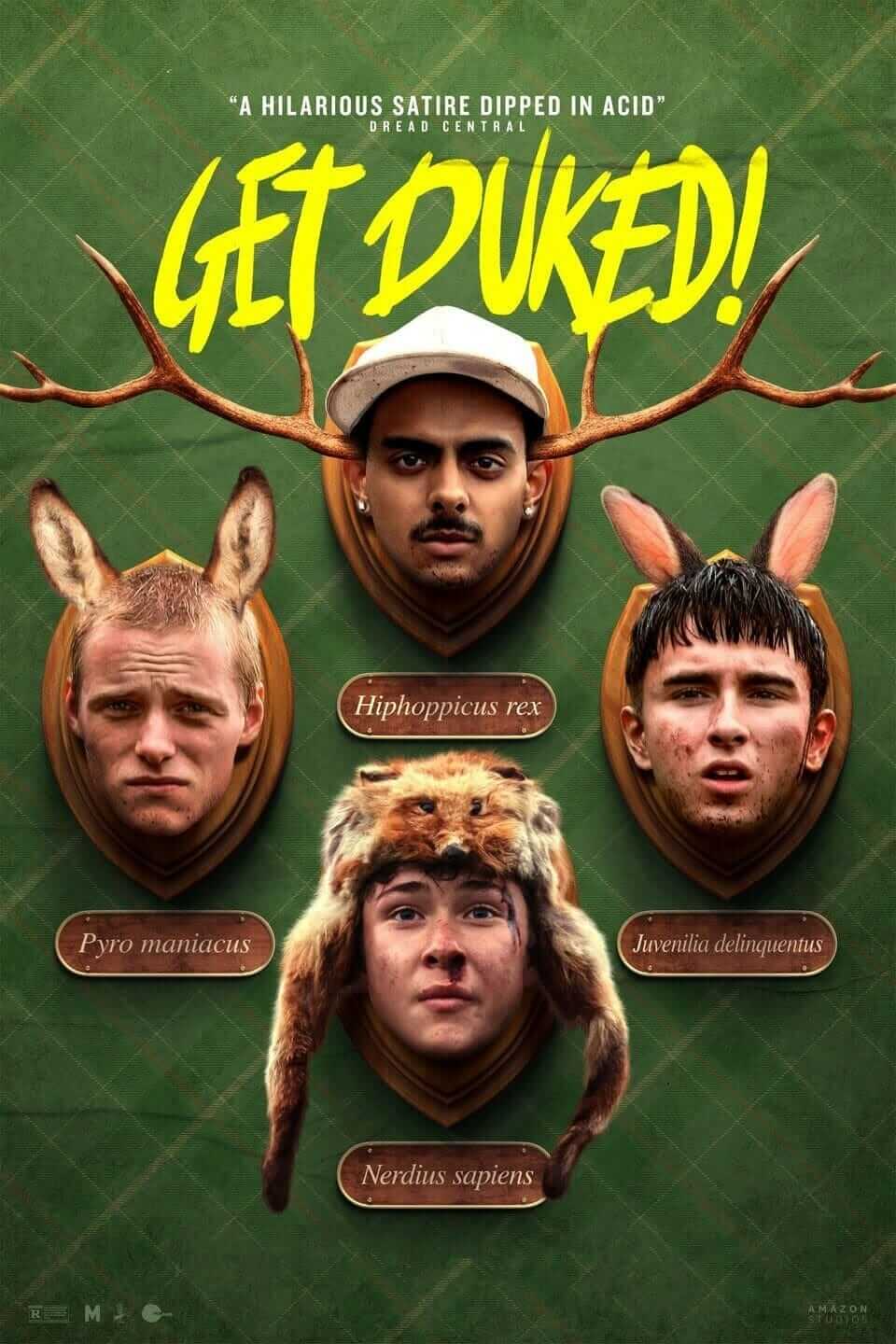 TLDR Get Duked! is a kinetic comedy with sharp derision running through its peeved veins. The film's horror elements are assuredly motivated by real-world matters, but thanks to Doff's sardonic slant, the message goes down more smoothly without any sort of aftertaste. There are moments where the story is distracted by its very own cleverness, but the overall picture feels fresh and relevant. An animated satire apropos of this quality and efficacy is well worth experiencing.